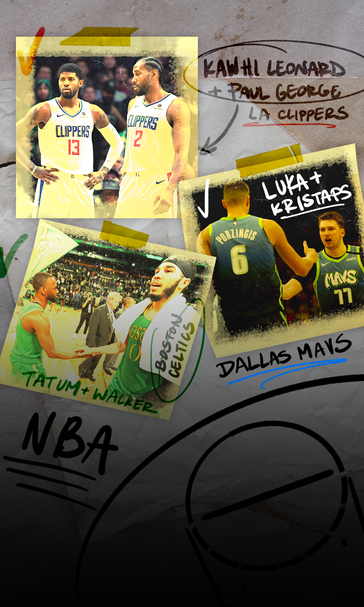 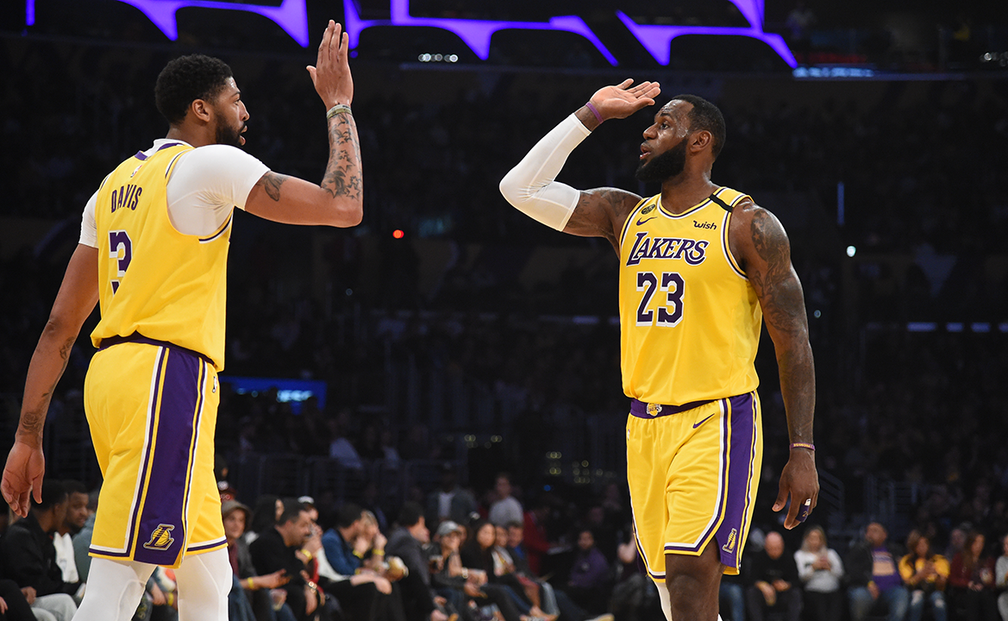 The Top 10 Duos In The NBA Bubble

It is officially restart week for the NBA, with the 2019-20 season resuming on Thursday. And as 22 teams vie for a title, the championship could come down to who has the best one-two punch.

With play scheduled to ramp up, FS1's Colin Cowherd ranked his top 10 duos to keep an eye on inside the NBA bubble in Orlando.

Gobert and Mitchell have led the Jazz to consecutive postseason appearances and both were named All-Stars for the first time this season. In addition, Gobert has the 5th most double-doubles (45) in the NBA this season, leading the likes of LeBron James (42) and Nikola Jokic (39), and he ranks 3rd in defensive win shares (4.0).

What Colin Says: "Let's be honest, Butler's had a great year ... Career-high in rebounds per game, assists per game, and averaging over 9 free throws per game ... When Bam and Butler are on the floor, they score 5.5 more points per game than their opponents."

Adebayo has firmly established himself as an All-Star in his third season, as well as one of the premier defensive players in the league, averaging 10.5 rebounds, 1.3 blocks and 1.2 steals to go along with 16.2 points. His 39 double-doubles are tied for 7th most in the NBA and he ranks 5th in the NBA in defensive win shares (3.6).

In addition, Butler is a 5-time All-Star and 4-time NBA All-Defensive Second Team selection, making this duo one of the most formidable defensive pairs in the league.

What Colin Says: "Total offense, but Damian Lillard and CJ McCollum, not a ton of defense – the opposite of Utah ... Since Steph Curry is not here, Dame is the best shooter in the bubble. He's an all-time offensive threat. Unlimited range ... CJ McCollum, similarly, very good offensive player."

Lillard and McCollum are averaging a combined 51.4 points per game, the third highest scoring average of any duo in the league, trailing only Houston's James Harden and Russell Westbrook (61.9) and the Los Angeles Lakers' Anthony Davis and LeBron James (52.4).

What Colin Says: "Everybody loves these guys. In talent, you would put them one or two. Here's the problem – their net rating and offensive rating has gone down in each of their last three seasons together. So even though I think Simmons is a tremendous young defensive player and Embiid can man you up down low, something's not working, and it's not getting better."

Essentially, all that's left to achieve for Embiid and Simmons is playoff success. Philadelphia has lost in the Eastern Conference semifinals in each of the past two seasons, and Simmons has career playoff averages of 15.0 points, 8.1 rebounds and 6.3 assists, compared to career regular season averages of 16.4 points, 8.3 rebounds and 8.0 assists.

What Colin Says: "Teams were outscored by almost 7 points when these two were on the floor. Luka's unbelievable – leads the NBA with 14 triple-doubles at 20 years-old. ... And Porzingis was on fire before the bubble. He was averaging 25 [points] and 11 [rebounds] in his last 15 games."

What this Dallas Mavericks duo lacks in playoff experience, they make up for in talent. Doncic is arguably a top five player in the league in only his second season. He ranks 6th in the NBA in points per game (28.7), 4th in assists (8.7), and he is 1st among guards in rebounds per game (9.3).

"It's going to be lower than everybody thinks because they have a very good defensive rating. Here's my concern about this – the Bucks are 9-1 without Khris Middleton this season. So this feels like one great player and a player that Milwaukee is sometimes fine without."

Antetokounmpo appears to be en route to a second consecutive MVP win, a feat that often overshadows the success of Middleton, who has made two consecutive All-Star appearances. Middleton is averaging career-highs in points (21.1), rebounds (6.2), field goal percentage (49.9%), and free throw percentage (90.8%).

Giannis, on the other hand, is leading the league in PER (31.6), and only Wilt Chamberlain, Michael Jordan and LeBron James have posted higher PERs in a season in NBA history.

What Colin Says: "Both scorers, both passers. Denver outscored opponents by 7 points per 100 possessions with Jokic and Jamal Murray on the floor. Second consecutive season as the only duo with 100 plus assists to each other."

Jokic is a 2-time All-Star and was named All-NBA First Team last season. He ranks 5th in offensive win shares, and Jokic, Antetokounmpo and James are the only three players in the league averaging a double-double while averaging at least 20 points.

"I think these guys are undervalued. Kemba Walker has been a great pro forever ...Tatum was torrid before the break. Jayson Tatum has become a top six player in the NBA, was averaging 29 points and 9 rebounds per game since the All-Star break. When these guys are on the floor together, the Celtics outscored people by 11.5 points per 100 possessions."

Both Walker and Tatum were NBA All-Stars this season, with Walker making his fourth straight appearance and Tatum making his debut.

After posting 15.7 points and 6.0 rebounds per game last season, Tatum's averages jumped to 23.6 points and 7.1 rebounds this year. He leads Boston in scoring, and the Celtics are an impressive 32-6 when Tatum scores 20 points or more.

What Colin Says: "Excellent defensive players. Two of the top five, maybe two of the top three 2-way players in the NBA with Klay Thompson. They won 75% of the games they played together ... These guys really work together and remember, Kawhi chose the Clippers if Paul George would join him, and I think one of the reasons is Paul plays a similar style game."

Leonard is looking to win a third NBA title with a third franchise and earn a third NBA Finals MVP award. He's averaging career-highs in points (26.9), rebounds (7.3) and assists (5.0).

The biggest question mark revolving around the Clippers' superstar duo is health. George has missed 22 games so far this season, and Leonard has missed 13. Does the 4-month layoff mean a clean bill of health for the Clippers?

What Colin Says: "Come on – LeBron and Anthony Davis."

The Lakers dynamic duo has led them to the top of the Western Conference standings and back to the playoffs for the first time since 2013. James is the only double-digit assist-man in the NBA and is in the thick of the MVP race, and Davis is a leading contender for Defensive Player of the Year in his first season in LA.

NBA Outlines Rules For Bubble Guests
The NBA will soon allow players to invite guests into the Orlando bubble, but there are a few notable restrictions.
3 hours ago

NBA 6-Pack: Dame Keeps Gettin' Dollas
Damian Lillard is on another level and Phoenix just can't lose. Here are 6 things to know about Tuesday in the NBA.
18 hours ago

NBA Announces Bubble Awards
The NBA will award a Bubble MVP and name an All-Bubble Team. Here are a few names to keep an eye on.
1 day ago

President Trump Advocates For Football
President Donald Trump gave his support for college football being played in the fall.
1 day ago
those were the latest stories
Want to see more?
View All Stories
Fox Sports™ and © 2020 Fox Media LLC and Fox Sports Interactive Media, LLC. All rights reserved. Use of this website (including any and all parts and components) constitutes your acceptance of these Terms of Use and Updated Privacy Policy. Advertising Choices. Do Not Sell my Personal Info