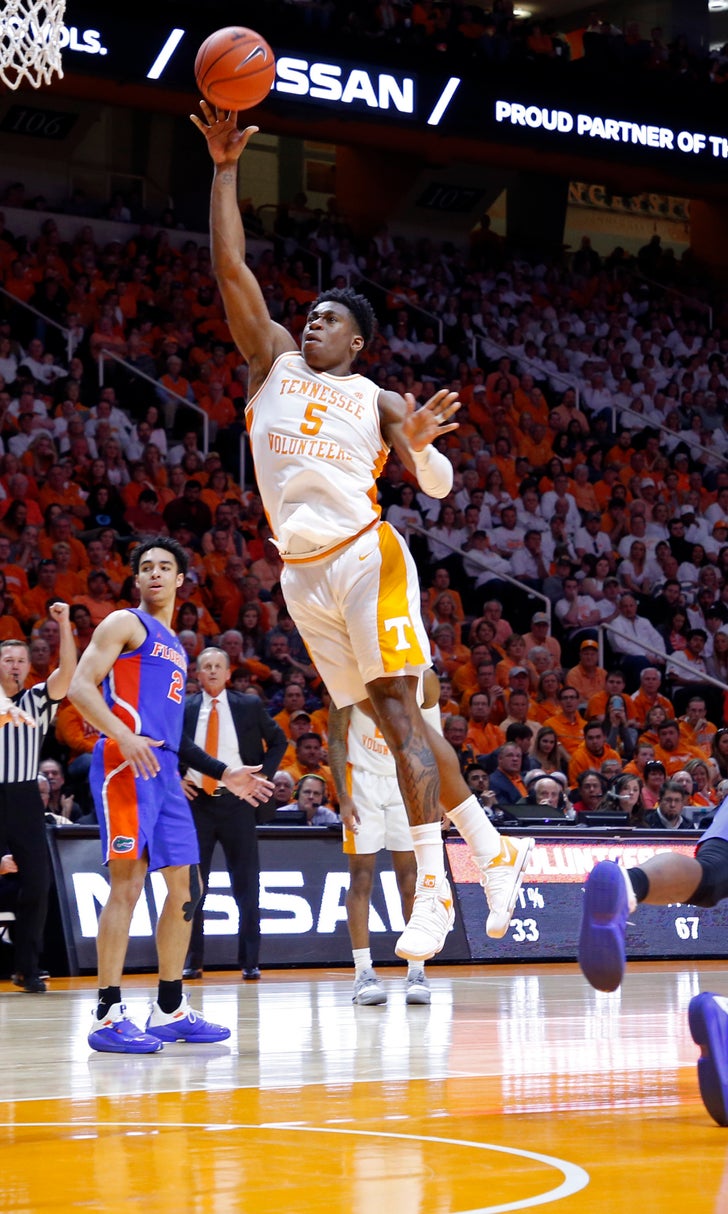 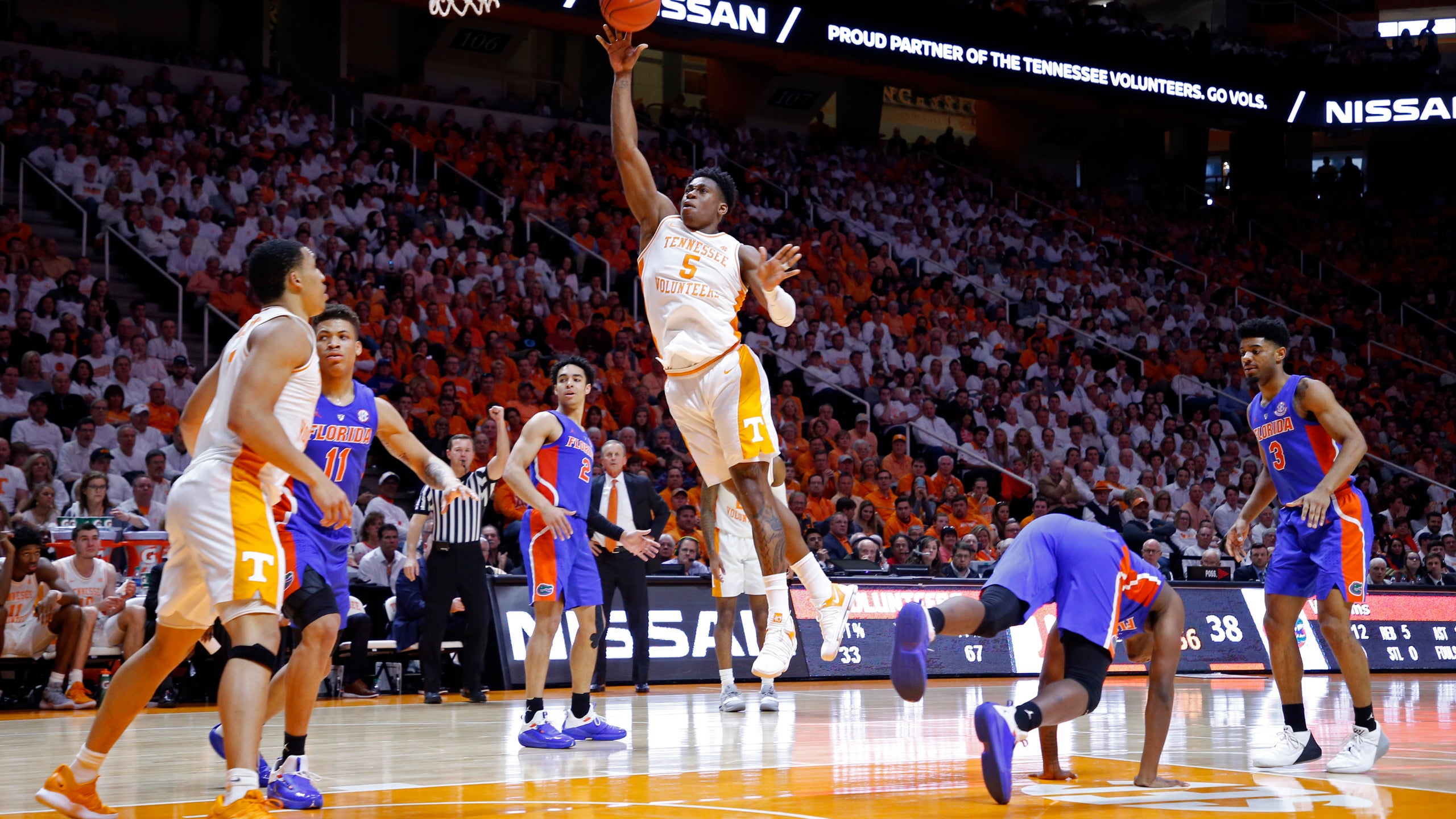 CHARLOTTESVILLE, Va. (AP) — RJ Barrett scored 26 points, Zion Williamson had 18 and No. 2 Duke used an early barrage of 3-pointers to stun No. 3 Virginia and then held off the Cavaliers, 81-71, on Saturday night.

Barrett hit his first five tries from 3-point range for the Blue Devils (21-2, 9-1 Atlantic Coast Conference). His fifth one gave them a 29-15 lead after less than 12 minutes of play. Cam Reddish took over after that, hitting 5 of his first 6, the last three early in the second half as the Blue Devils rebuilt their lead to 52-41. He finished with 17 points.

Kyle Guy and Ty Jerome each scored 16 to lead Virginia (20-2, 8-2), which had a 13-game home winning streak snapped. The Cavaliers lost to the Blue Devils at John Paul Jones Arena for the third consecutive time.

The game drew a sellout crowd, most hoping Virginia could avenge a 72-70 loss at Duke on Jan. 19, but it was the Blue Devils who put on a show in front of LeBron James and past stars from both schools.

Rui Hachmiura added 18 points and Filip Petrusev had 15 for Gonzaga (23-2, 10-0 West Coast), which is likely to move up in The AP poll after No. 3 Virginia lost to No. 2 Duke earlier Saturday.

Saint Mary's Jordan Ford, the leading scorer in the WCC, was held to eight points.

Kentucky (20-3, 9-1 Southeastern Conference) has won 10 straight games since losing to Alabama in its conference opener on Jan. 5. The Wildcats had to work for this one after an 18-point lead dwindled to one possession with 1:18 left, but the Bulldogs weren't able to score again.

Mississippi State (16-7, 4-6) led 17-15 midway through the first half, but Tyler Herro nailed a contested 3-pointer to give Kentucky the lead. The Wildcats never trailed again.

RENO, Nev. (AP) — Trey Porter had 20 points and nine rebounds as Nevada avenged its only loss of the season by dominating New Mexico.

Caleb Martin scored 20 points on 7-of-13 shooting, and Jordan Caroline had 13 points and 13 rebounds.

ANN ARBOR, Mich. (AP) — Jon Teske had 17 points and 12 rebounds, holding his own inside against Ethan Happ, and Charles Matthews scored 16 of his 18 points in the second half to lift Michigan past Wisconsin.

The Big Ten-leading Wolverines (22-2, 11-2) avenged one of their only losses this season despite going 0 for 10 from 3-point range in the second half.

Happ had 18 points and 11 rebounds for Wisconsin, but the Badgers (17-7, 9-4) had their six-game winning streak snapped.

Freshman Coby White matched his season high with 33 points for the Tar Heels (19-4, 9-1 Atlantic Coast Conference), who survived a wild finish filled with big shots by both teams.

Miami had a final chance to tie it after a timeout, but White poked the ball loose from Chris Lykes, and Williams dove on the floor to recover the ball.

Marquette (20-4, 9-2) led by 15 early in the second half before Villanova rallied. Jermaine Samuels missed an off-balance jumper as time ran out.

The Hokies (18-5, 7-4 ACC) made just one field goal in the final 8:33 in losing consecutive games for the first time this season.

The Tigers (15-8, 5-5) are finally looking like the team that surprised many when it reached the NCAA Tournament's round of 16 last March.

Kerry Blackshear Jr. 17 points to lead Virginia Tech before fouling out in the final minutes.

Devon Dotson added 18 points while Mitch Lightfoot provided a big lift off the bench for the Jayhawks (18-6, 7-4 Big 12), who were playing their first game without starting guard Lagerald Vick. He left the team earlier in the week to deal with personal issues.

Cameron McGriff scored 22 points for Oklahoma State (9-14, 2-8), which played Kansas to a draw in the first half.

INDIANAPOLIS (AP) — Carsen Edwards scored 27 points and Grady Eifert added a season-high 16 as Purdue rebounded from a lackluster first half to pull away for a victory over Nebraska.

Thomas Allen made five 3-pointers and matched his season-best with 18 points to lead the Cornhuskers (13-11, 3-10). James Palmer Jr. finished with 17 points for Nebraska, which has lost seven straight including all four since losing Isaac Copeland on Jan. 26 with a torn ACL in his left knee.

All Purdue needed to take control was one quick flurry early in the second half.

Terance Mann added 20 points for the Seminoles (18-5, 6-4 Atlantic Coast Conference), who made 11 of 12 free throws in overtime to wrap up their fifth straight win.

Kouat Noi, Desmond Bane and Alex Robinson each had 17 for the Horned Frogs (17-6, 5-5 Big 12). They used a staggering 27-4 first-half run to blow past the beleaguered Cyclones and greatly boost their NCAA Tournament chances.

Marial Shayok scored 24 points and Michael Jacobson had 16 to lead the Cyclones (18-6, 7-4), who saw their winning streak snapped at four games.

Jarrett Culver had 13 points and Matt Mooney and Brandone Francis each added 11 for the Red Raiders (19-5, 7-4 Big 12), who stayed within striking range of conference leader Kansas State.

Rashard Odomes scored 14 points and Brady Manek had 11 points and 11 rebounds for Oklahoma (15-9, 3-8), which lost its fourth straight.

Skylar Mays had 20 points for LSU (19-4, 9-1 SEC), which bounced back from its lone conference loss with a pair of league victories heading into its toughest road test yet at fifth-ranked Kentucky.