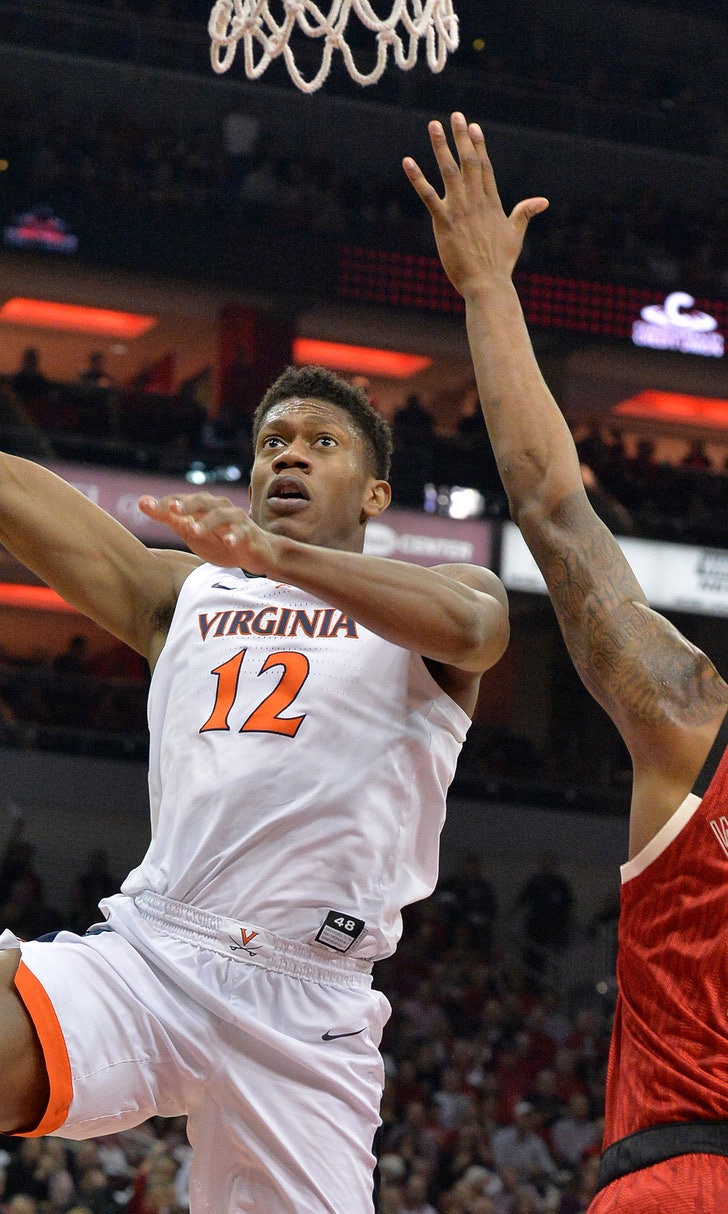 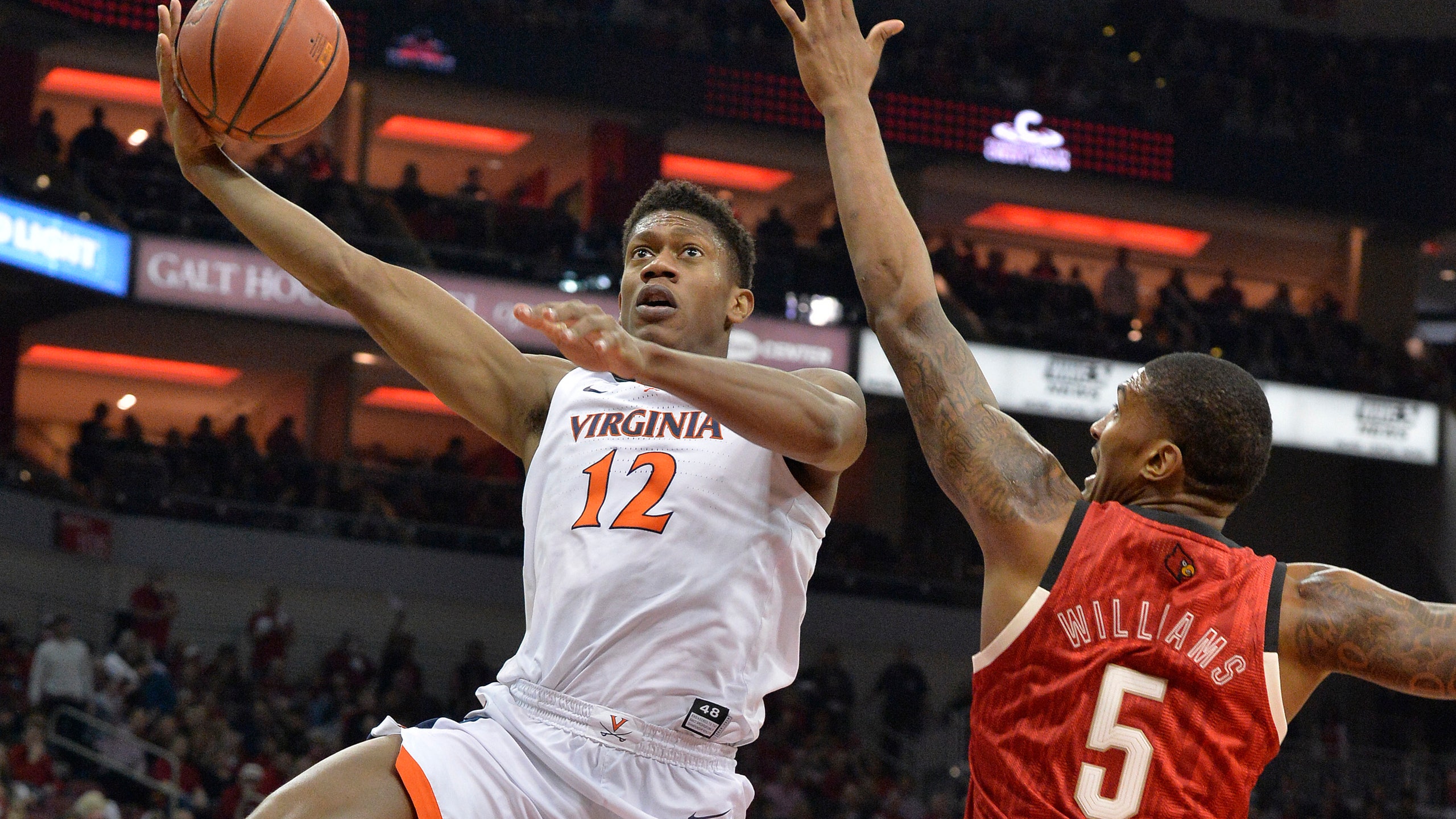 Virginia too strong in second half for Louisville

Three days after the Hall of Fame coach of the Syracuse Orange struck and killed a pedestrian on a darkened highway that leads out of town, he returned to the bench Saturday night. Boeheim's first public appearance since the Wednesday night accident that killed 51-year-old Jorge Jimenez came in a 75-65 loss to top-ranked Duke and coach Mike Krzyzewski, a close friend.

The accident happened after the Orange's 20-point victory over No. 18 Louisville. Police say Jimenez was a passenger in a car that apparently skidded out of control on a patch of ice and hit a guardrail. Police say Jimenez was trying to get to safety when he was struck by the 74-year-old Boeheim's SUV. Boeheim had swerved to avoid the disabled car, which was perpendicular across two lanes.

Jimenez was taken to a hospital, where he was pronounced dead. Another man in the car suffered minor injuries. A moment of silence was observed before the game for Jimenez and his family.

Once the game started, it seemed like just another tilt featuring the two winningest coaches in NCAA Division I history, except for the massive record crowd that made the dome's walls shake every time the Orange scored. The Blue Devils (24-3, 12-2) improved to 7-0 on the road in the Atlantic Coast Conference.

Josh Perkins had 21 points and seven assists for Gonzaga (27-2, 14-0). The Bulldogs have won 18 in a row, the longest streak in the nation, and have clinched the West Coast Conference regular-season title.

Hunter was perfect after the break, making all six shots to finish 9 of 11 from the field. Mamadi Diakite added 14 points, while Jay Huff came off the bench to score 12. The Cavaliers maintained at least a share of the conference lead in the process.

After making 10 of 16 from long range in the first 20 minutes, Louisville managed just 2 of 17 afterward and lost for the fifth time in seven games.

PJ Washington scored 24 points to lead No. 4 Kentucky. Washington led three players in double figures and helped lead the Wildcats to a regular-season sweep of the Tigers. The Wildcats (23-4, 12-2 Southeastern Conference) defeated Auburn 82-80 last month and made things easier the second time around. Tyler Herro followed Washington with 17 points and Ashton Hagans added 14.

Kentucky played without senior forward Reid Travis, who sprained his right ankle in a 66-58 win at Missouri last Tuesday. Travis is expected to miss the next two weeks.

Smart, a freshman who grew up near Baton Rouge, began to take over the game with about six minutes left in regulation, scoring 11 straight Tigers points to prevent Tennessee from pulling away.

Admiral Schofield had 27 points and Grant Williams 18 for Tennessee (24-3, 12-2), which has lost two of three after spending about a month ranked first in the nation.

Waters was ruled out with an undisclosed illness shortly before the game, and the challenge only got tougher for LSU when starting forward Naz Reid committed two early fouls. Reid never found his rhythm, missing all nine shots he attempted from the floor. He scored his only point when he hit the second of two free throws in the final minute of overtime.

Jordan Caroline added 17 points, Tre'Shawn Thurman had 14 points and 10 rebounds, and Jazz Johnson scored 10 points in his first start of the season for Nevada (25-2, 12-2 Mountain West).

They shot 48 percent in the second half while holding Florida State to 25 percent shooting after halftime, following their victory at No. 1 Duke three nights earlier by snapping the ACC's longest active winning streak.

David Nichols scored 16 points and Terance Mann added 10 for the Seminoles (21-6, 9-5), who had won eight straight but were held to 31 percent shooting in their first loss in more than a month.

Alpha Diallo had 19 points and six rebounds for the Friars (15-13, 5-10 Big East). Providence went from shooting 27.6 percent in the first half to 50 percent in the second half, yet Marquette was too tough a cover on a day that the Golden Eagles had five players in double figures.

When Davide Moretti made their eighth 3-pointer with 6 1/2 minutes left in the first half, it was already 37-17, the largest deficit to that point for Kansas this season. The margin grew to as large as 33.

Texas Tech took over sole possession of second place in the Big 12, one game behind Kansas State (21-6, 11-3) with four regular-season games remaining.

Purdue (20-7, 13-3 Big Ten) won its second straight close road game, having beaten Indiana 48-46 on a tip-in with 3 seconds left Tuesday. Ryan Cline's 3-pointer to end the first half gave the Boilermakers a two-point lead, and they never trailed again.

Their 14th win in 16 games pulled them into a brief three-way tie for first in the Big Ten with Michigan and Michigan State. The tie will be broken Sunday when those two teams meet in Ann Arbor.

TCU, which had blown a 10-point lead it built before halftime, finally went ahead to stay when Desmond Bane hit a 3-pointer from the left wing with just under two minutes left to snap a 68-68 tie. JD Miller later drove hard for a layup, knocking down one defender without a call and getting fouled by another to make it 73-70 in the final 41 seconds. He missed the free throw.

Iowa State (19-8, 8-6 Big 12) was within 73-72 when Marial Shayok found a gap and drove for a layup with 22 seconds left. Noi added two free throws before the Cyclones got to attempt two 3-pointers in the final three seconds, the last after a TCU turnover while the buzzer sounded before a lengthy review that added .4 seconds on the clock.

The Fighting Irish (13-14, 3-11), who got as close as six points on three occasions in the second half, lost their third straight game and their ninth in their last 11 outings.

The Wildcats had no problems as Xavier Sneed and Austin Trice led the team with 12 points each and Kamau Stokes had 11. K-State had 10 players score.

Barry Brown led the Wildcats in rebounding with seven as the team outrebounded the Cowboys 36-23.

With three Big Ten games left, including two at home, the Terrapins are in fourth place and in position to secure a double bye in the conference tournament.

Fernando scored all of his points after halftime, and reserve freshman Serrel Smith Jr. contributed a career-high 14 points for Maryland. Despite a slow start, Fernando secured his ninth double-double in his last 10 games.