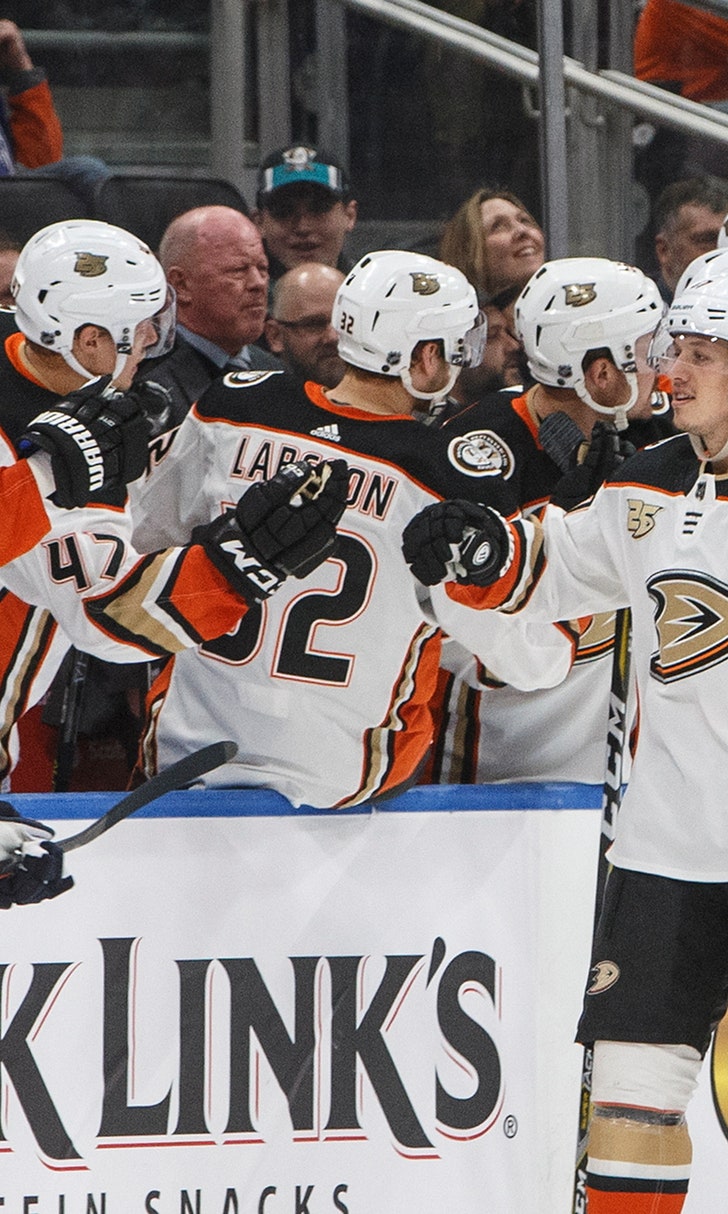 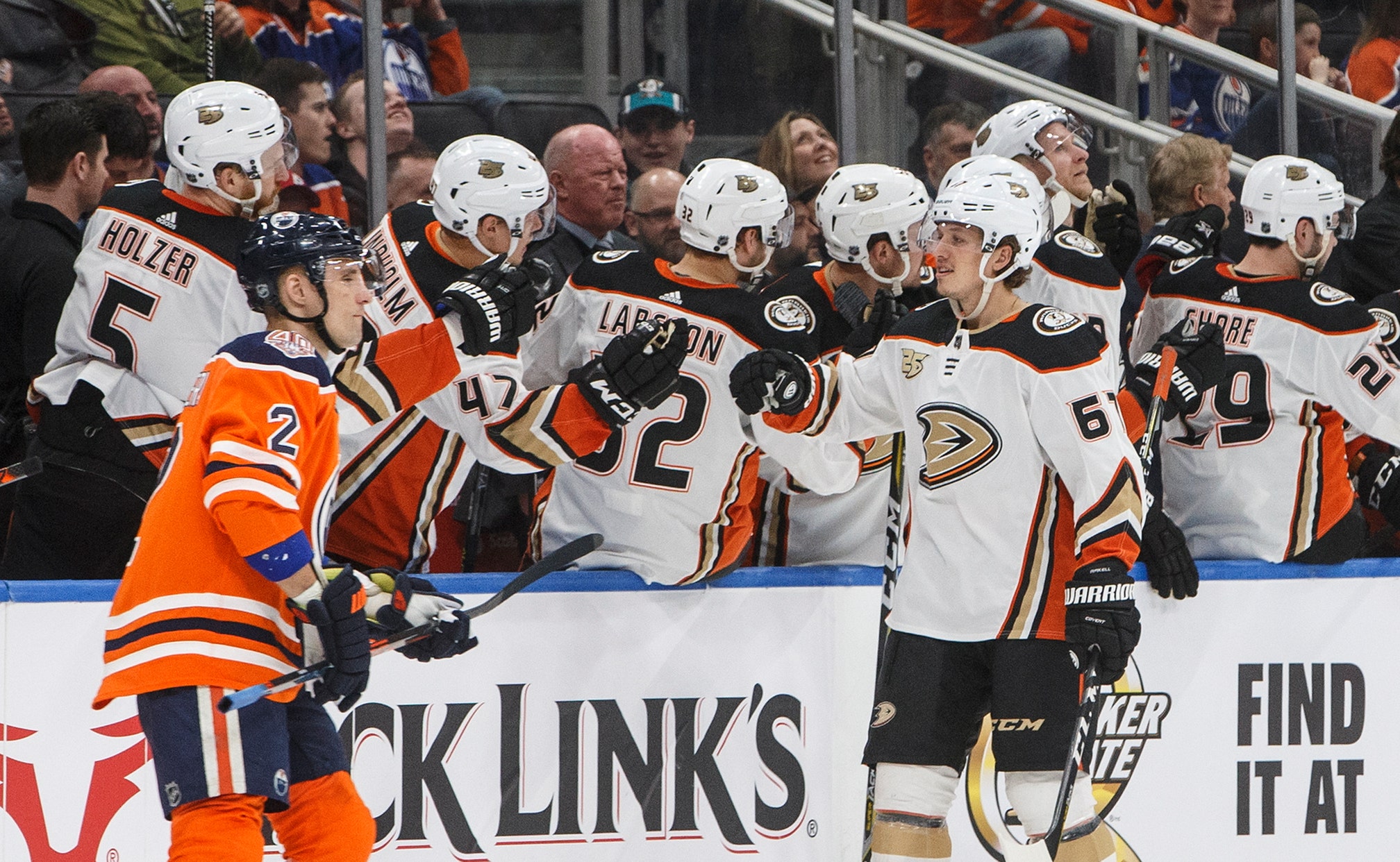 EDMONTON, Alberta (AP) — Rickard Rakell took over the game with one big second period for the Anaheim Ducks.

Rakell scored all three of his goals in the middle period for a natural hat trick, powering the Ducks past the Edmonton Oilers 5-1 on Saturday night.

"I don't think I've ever done that before," Rakell said. "It's nice to do that for the first time."

Corey Perry and Devin Shore also scored for the Ducks, who have won two of their last three — and bounced back from a 6-1 loss to Calgary on Friday night.

"It felt great for our team," Rakell said. "We were not happy with how we got pretty much dominated by Calgary last night. So when we have a good first period like that, we try to keep it going in the second and when you get a couple of goals, the whole team feels good and it's much easier to play."

Edmonton ended John Gibson's shutout bid with 6:51 left in the game on Sam Gagner's goal. Gibson finished with 30 saves while sending the Oilers to their second loss in a row.

"There was a long line of guys who didn't play well," Oilers coach Ken Hitchcock said.

Shortly after Jakob Silfverberg rang a shot off the post, Oilers goalie Mikko Koskinen got a piece of Perry's shot with his glove, only to see it trickle behind him into the net to give the Ducks a 1-0 lead with 4:43 remaining in the opening period.

The Ducks took a two-goal lead 1:21 into the second period when Silfverberg kept the puck in at the line and sent it to Rakell, who scored on a one-timer.

Rakell made it 3-0 at the 8:48 mark when he backhanded in a rebound for his second goal of the night and his sixth in the past five games.

Rakell completed the hat trick with 4:47 left to play in the second. Anthony Stolarz replaced Koskinen in net after that goal.

Anaheim added to its lead 1:29 into the third when Shore scored on a blast off of a faceoff.

"We're depleted, that's an understatement," Perry said about the Ducks' lengthy list of injuries. "Guys are getting a chance to play bigger roles, bigger minutes, learn what the game is in this league and how to play every single night and they're getting a great experience for it."

Ducks defenseman Jake Dotchin was ejected early in the game once it was discovered he had officially been listed as a scratch.

NOTES: It was the fourth and final meeting between the teams, with Edmonton winning the season series 2-1-1. Seven of the teams' past eight games had been decided by one goal, including five which went to overtime. ... The Ducks have been hampered by injuries of late, missing the likes of Ondrej Kase (shoulder), Chad Johnson (head), Brendan Guhle (upper body), Ryan Kesler (hip), Nick Ritchie (upper body), Ryan Getzlaf (upper body), Josh Manson (upper body) and Troy Terry (lower body). 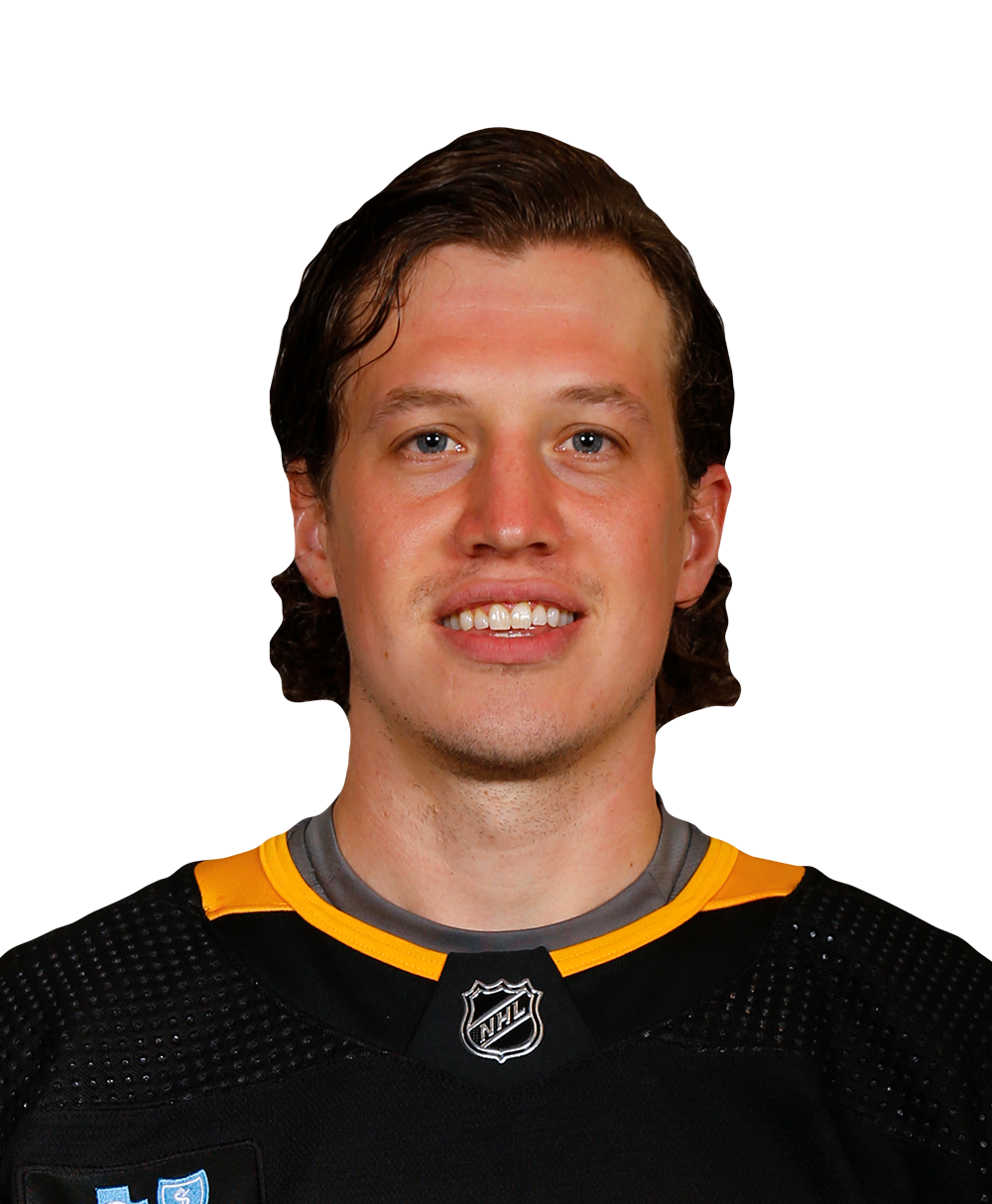