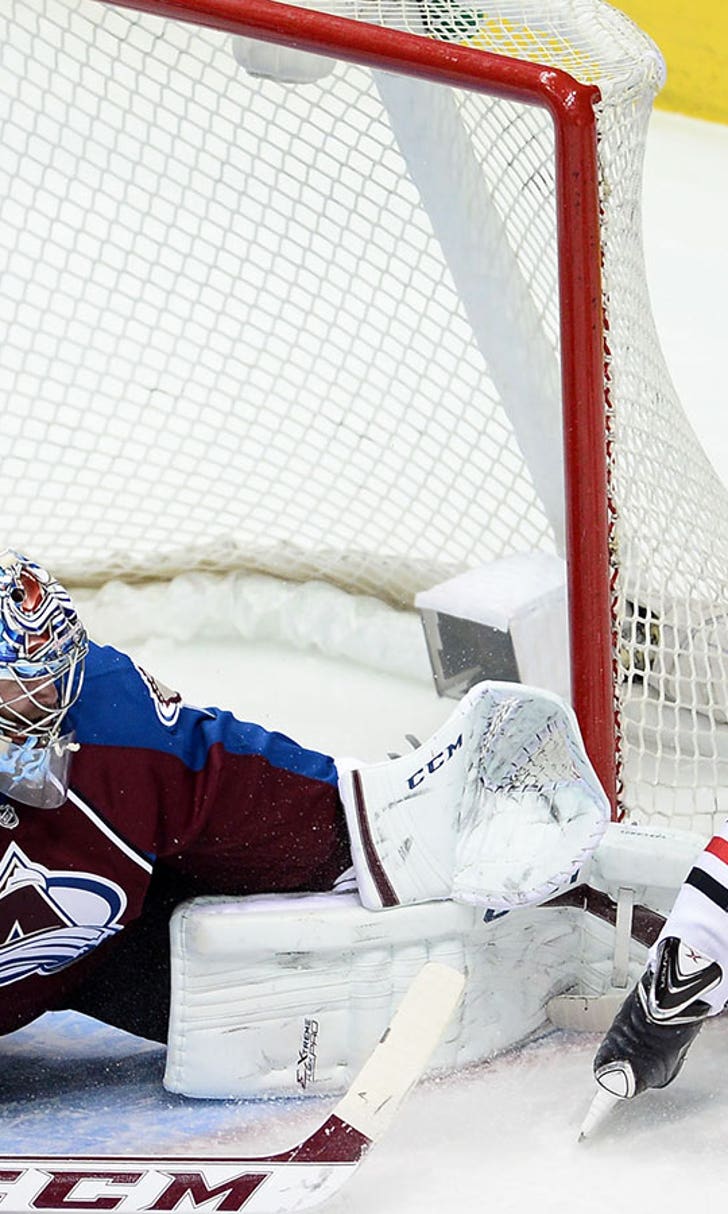 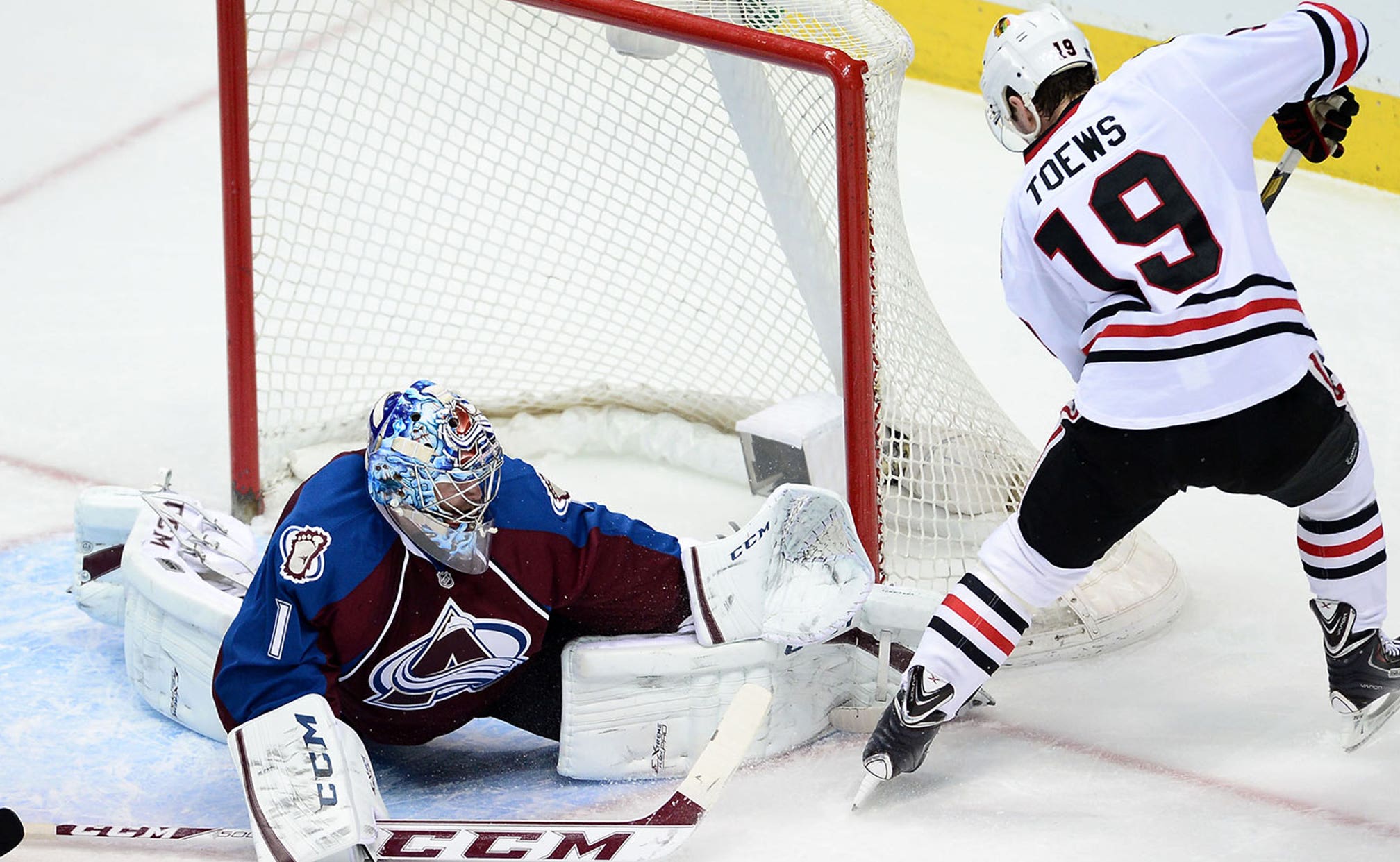 Varlamov gets milestone win as Avs hold off Blackhawks 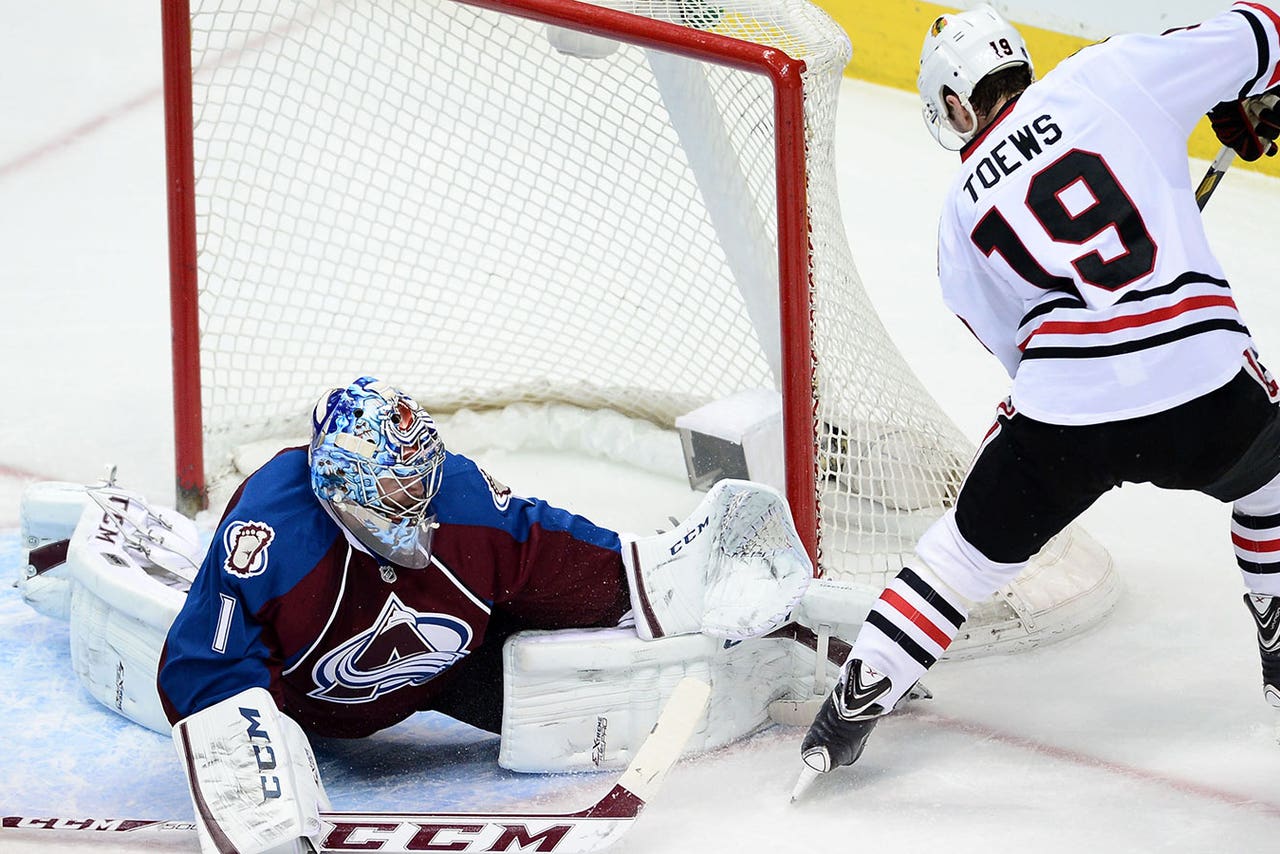 The Colorado Avalanche downplayed their dominance over the defending Stanley Cup champions this season.

No sense giving the Chicago Blackhawks any sort of bulletin board material, just in case the two teams meet again in the postseason.

Semyon Varlamov stopped 37 shots for his 100th NHL win, helping the Avalanche beat the Blackhawks 3-2 on Wednesday night to take four of five in the season series.

"I don't want to talk about sending messages," Varlamov said. "We are focusing on what we are doing and on the playoffs."

Blackhawks coach Joel Quenneville wasn't reading too much into the Avalanche's advantage, either. After all, the Avs only outscored Chicago 17-14.

That's because these two squads are almost mirror images. They're fast, young and have quality goaltending.

Chicago has been that way for years. The Avalanche are just coming of age under first-year coach Patrick Roy. He doesn't mind the comparisons to Chicago, but thinks it might be a little premature because of "what they've been able to accomplish. But we certainly look up to them."

Brad Malone scored his first goal of the season, Matt Duchene extended his points to a career-high nine games with a goal and an assist, and Ryan O'Reilly scored what turned out to be the game-winner on a two-man advantage as the Avalanche jumped over the Blackhawks in the Central Division standings and into second place.

"We are happy to be in second place, but that's not our goal," Duchene said. "We want to keep pushing and climb as high as we can."

Patrick Kane and Brandon Saad scored for Chicago. Antti Raanta made 26 saves filling in for Corey Crawford. It was the first time Raanta has been in net since Jan. 28.

The Avalanche had a 5-on-3 opportunity for 1:30 midway through the third period following an interference call on Andrew Shaw and a delay of game by Marcus Kruger after he sent the puck into the seats.

O'Reilly capitalized when he grabbed a rebound near the net and knocked it in for a 3-1 advantage.

Chicago pulled Raanta with 2:32 remaining and scored seconds later when Saad knocked the puck past Varlamov.

The Blackhawks momentarily put Raanta back on the ice, but summoned him to the bench with 1:37 left, leading to a wild finish.

Saad sent a backhander just over the net with 25 seconds left and lined a shot into the chest of Varlamov with 4.9 seconds remaining. After that save, the crowd began chanting "Varly! Varly!"

"Varly has been playing outstanding for us," Roy said. "He gives us a chance to win every night."

Duchene staked Colorado to a 2-0 lead 19 seconds into the second period when he sent a wrist shot past Raanta. The Blackhawks sliced into the lead at 8:23 when Kane skated down the right side with defenseman Jan Hejda hanging all over him. Kane found just enough separation to lift backhanded shot over the shoulder of Varlamov for his 29th goal of the season.

Colorado was without forwards P.A. Parenteau (right knee) and Paul Stastny (back). The team called up Paul Carey and Malone from the Lake Erie Monsters of the American Hockey League to add depth.

Carey made his NHL debut and Malone instantly contributed as he scored late in the opening period. Cruising along the left boards, Malone sent a low liner at Raanta that went right through his legs.

"It was a good shot. It was a surprising shot," Raanta said. "That's how hockey treats you. You have to let those goals go and just keep going and try to make more saves."

NOTES: Blackhawks F Marian Hossa (upper body) missed his fourth straight game. ... Varlamov had an assist on Malone's goal, his third of the season. ... Varlamov was 4-0 in five games (four starts) against Chicago, with a 1.59 goals-against average. ... Varlamov was given the puck to commemorate his 100th win. "It was important that I save the puck," he said.