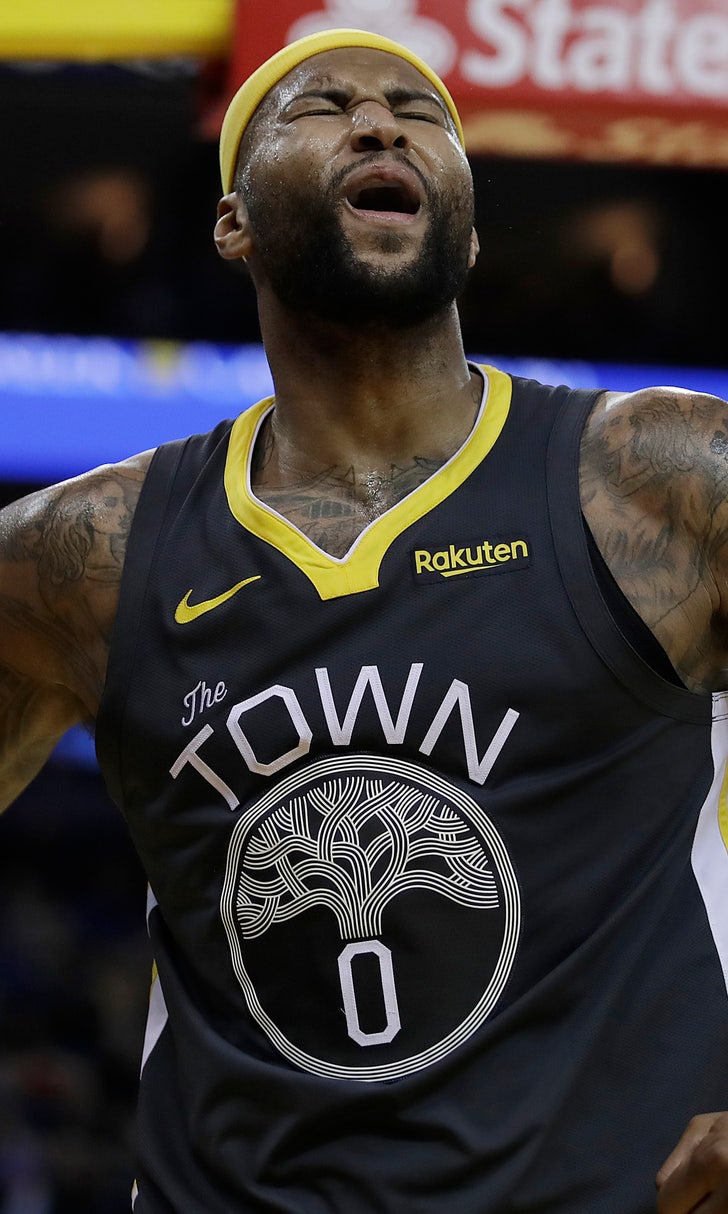 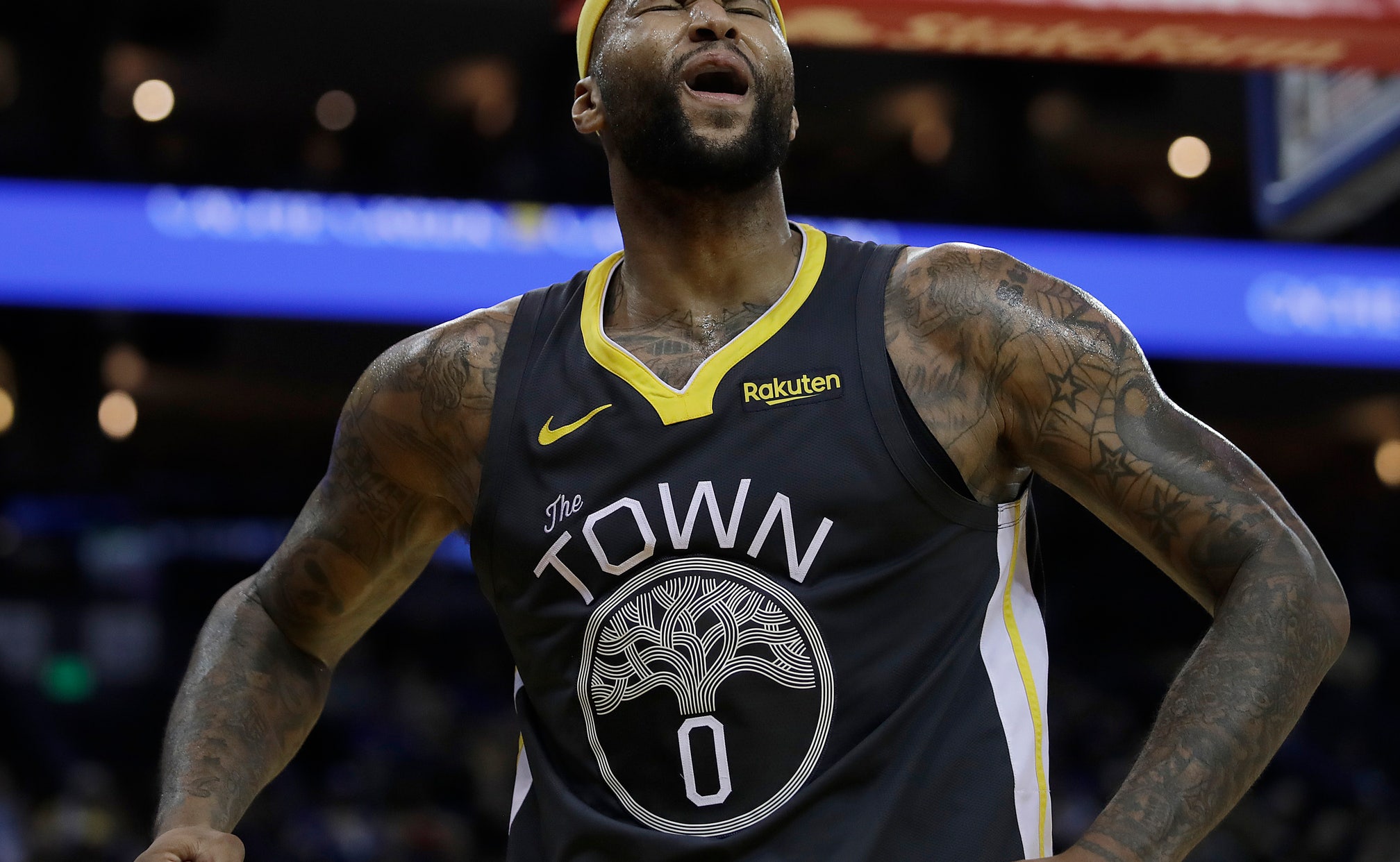 DeMarcus Cousins to get his first playoff chance at last

OAKLAND, Calif. (AP) — DeMarcus Cousins shoves off assistant coach Jarron Collins and goes hard for the basket. He swishes a 3-pointer from up top, then hits a jumper inside the arc on the right wing. Cousins drives to the hoop and makes a shot from close range, then a turnaround jumper goes in before he moves to the left side to begin the sequence again.

Long before the rest of the Golden State regulars have taken the court for pregame warmups, there is Cousins, earbuds in, meticulously focused on his preparation. In the locker room, he is one of the first to pull on his game jersey.

"It's been a long time coming for him," Collins said. "I definitely think he's excited and he's ready for the moment to play on the biggest stage. Obviously there's a lot that goes into it, the preparation, the dedication."

This is why Cousins approached the Warriors last summer and asked for a chance, even though he was working back from season-ending surgery for a torn left Achilles tendon. Cousins joined the two-time defending champions for $5.3 million, a low-risk move for general manager Bob Myers that has worked out beautifully for both sides.

"I never thought this situation would happen, but it's happened," Cousins said. "This is my team, and anybody that's followed me before this moment, you know how I fight for my team. It's the same thing. Step on them, you're stepping on me."

Cousins patiently worked back from a nearly yearlong absence after getting hurt in January 2018 with New Orleans, calling it one of the hardest things he has gone through emotionally and physically in his career. He made his Warriors debut Jan. 18 on the road against the Clippers, showing quickly he would make a big impact on both ends of the floor.

The four-time All-Star center's shooting stroke returned in a hurry. For him, finally getting back was largely conditioning and gaining strength in the leg to handle the rigors, pace and low-post pounding of an NBA game again.

The 28-year-old Cousins steadily found a groove and more minutes in coach Steve Kerr's rotations. He no longer glares at the coach for taking him out of games.

"He has been so much fun to coach," Kerr said. "And I wouldn't have said that before he came back when he was rehabbing, he was not that much fun to coach. He would agree with that, he was so frustrated from the injury and from not being able to play and the length of his rehab. Since he returned and since he's grown comfortable with the injury, with the comeback and since his confidence has grown, he's been amazing to coach.

"He's a fantastic human being, a great teammate. You see his frustration and his passion on the court so people automatically sort of attach labels to him. What I see is passion and emotion because he wants to win."

Teammate Shaun Livingston can only imagine what Cousins' first playoffs will mean after a nine-year wait, and after all the hours of rehab. Livingston has lived through the grueling recovery from a major injury like Cousins just endured.

Livingston's left leg could have been amputated 12 years ago, and the knee injury he suffered while with the Clippers in 2007 was so serious nobody knew if he'd walk again let alone play basketball. Going for a layup, Livingston's leg buckled backward, parallel to the court, when he fell in a freak accident.

So, he can certainly relate to Cousins' comeback challenges. Livingston offered an encouraging word whenever Cousins seemed to need that boost or encouragement.

"It's pretty gratifying to see that. ... It feels good to see somebody that, you go through the struggle and then you're able to come back and have success at this level," Livingston said. "Put in a lot of work, more importantly what is fulfilling to see is to see the hard work pay off, because I remember the hard work he's put in, getting to the gym early, getting his routine in. He's put in a lot of work into his body so he could come out and play and perform on the court."

Cousins has taken his offensive game to another level, finding a rhythm in Golden State's offense and finding the open teammate with solid ball movement. Before his return, Cousins insisted he understood how things might be in a starting lineup of All-Stars: "It's obvious I won't be taking as many shots as I have in the past," he said.

He is dangerous from anywhere, shooting the 3, moving well and drawing defenders to him. One of the NBA's most dominant big men when healthy, he is taking charges on the defensive end and altering shots.

"I never doubt DeMarcus. He's another guy that's got great pride, great competitor," Nuggets coach Michael Malone said. "He's always just wanted to be a part of a winning team and a winning organization. Now he has that here. He's a guy that he often gets overlooked because of the amount of talent and depth this team.

"You worry about this team at the 3-point line, well DeMarcus is a guy that in the playoffs you can go to and pound the ball inside into the post, he's going to score, get fouled, or create a double-team and find an open teammate. What a great luxury to have."