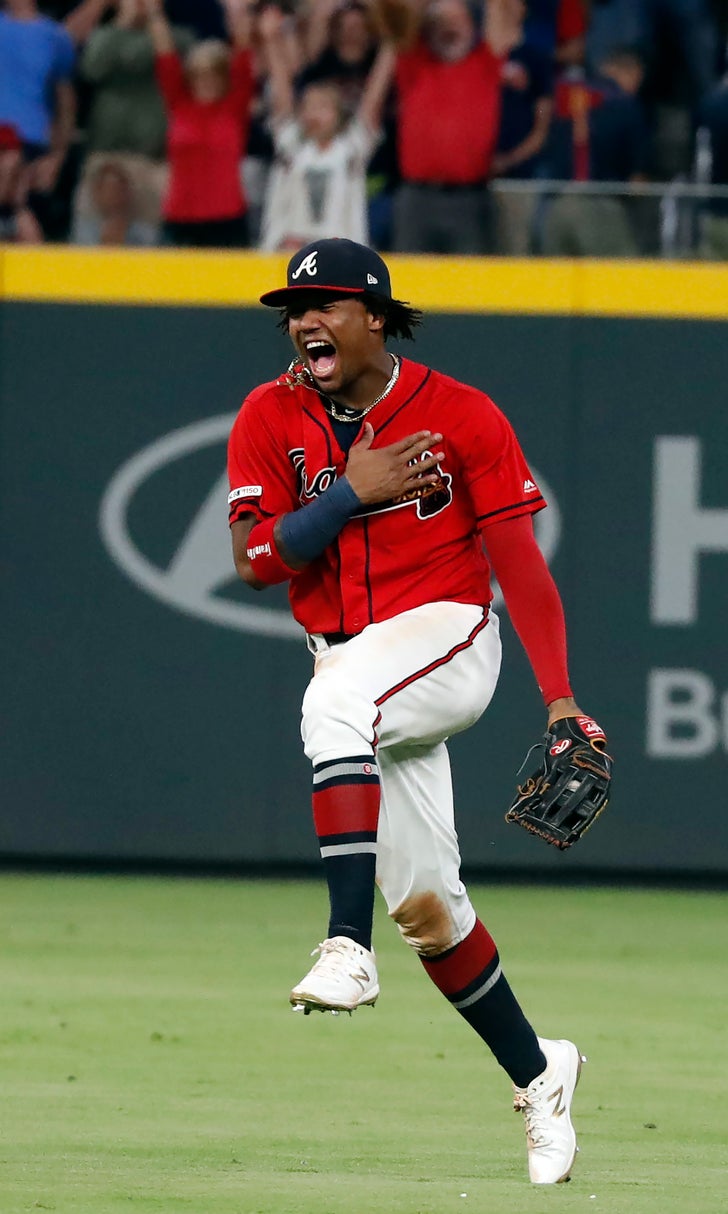 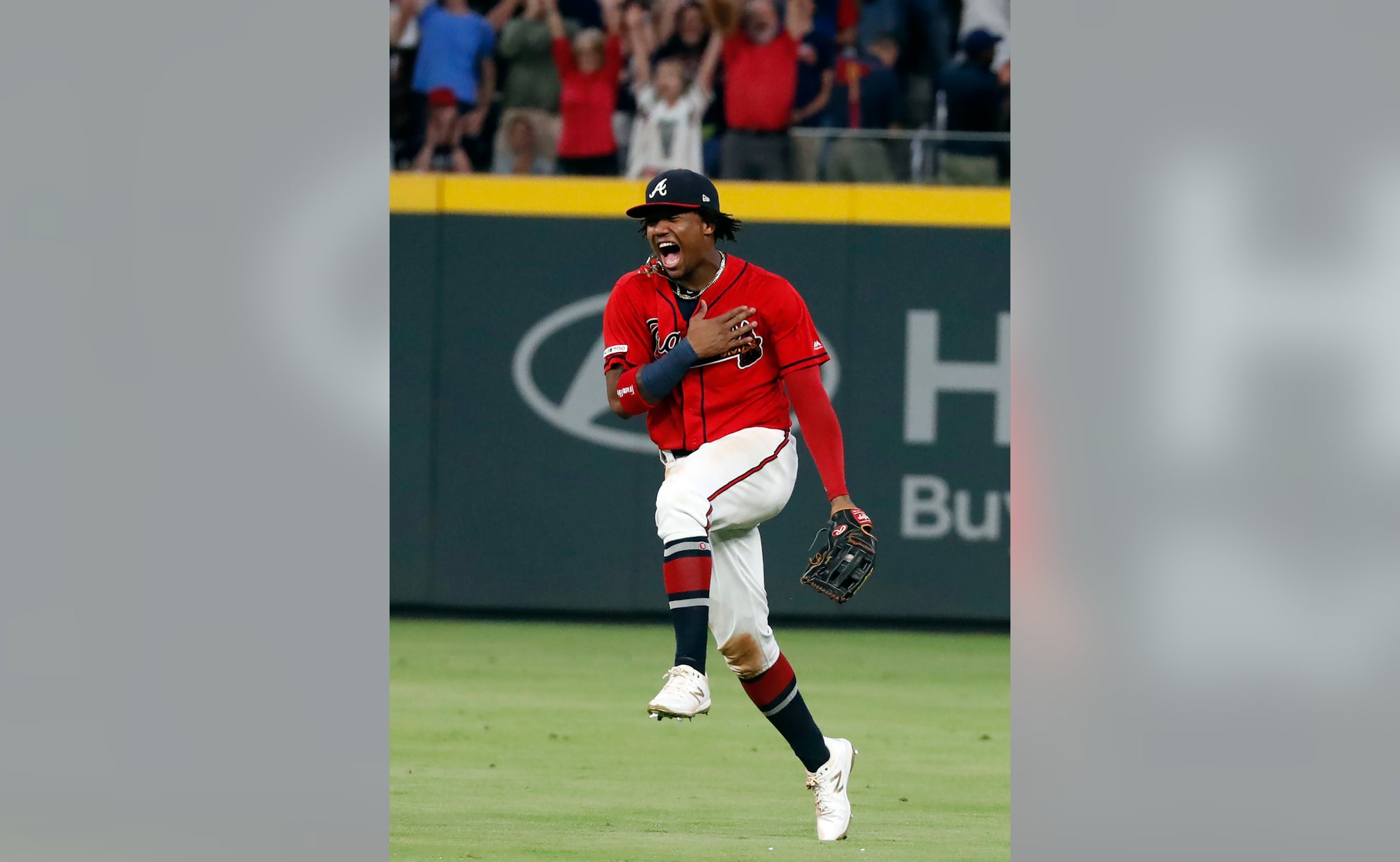 Acuña scored three runs to back Mike Foltynewicz (8-5), who allowed three hits in eight innings. Atlanta's 19th division title tied the New York Yankees for the most since Major League Baseball split into divisions for the 1969 season.

Atlanta's win ensured it will finish ahead of second-place Washington and will start the NL Division Series at home on Oct. 3, most likely against the NL Central champion.

Atlanta (95-60) moved into sole possession of first place for good on June 12. Led by Acuña, Freddie Freeman, Josh Donaldson and a offense that produced a franchise-best 241 homers, its lead swelled from 5½ to 10 games in six days ending with a 9-4 home win over Washington on Sept. 7.

The Braves, who have not won a postseason series since 2001, secured a playoffs berth last week and needed a few extra days to clinch the division. They lost three in a row for the first time since July 16-18 but have won two straight.

CHICAGO (AP) — Yadier Molina had three of St. Louis' four hits, including a two-run single, and the Cardinals held off the fading Chicago.

Carlos Martinez got the final two outs. The Cardinals' NL Central lead is three games over Milwaukee and five over Chicago. The Cubs are two games behind the Brewers for the second NL wild card.

Chicago has totaled nine runs while losing its past four games. The Cardinals have won the first two games of this key four-game set, and they'll play the Cubs five more times over their final eight games.

The Cubs scored their run following a St. Louis error in the second inning, and the Cardinals rallied in the sixth.

Ryan Helsley pitched a scoreless fifth and was awarded the win.

ST. PETERSBURG, Fla. (AP) — The World Series champion Boston Red Sox were mathematically eliminated in the late innings, then lost to Tampa Bay when Willy Adames had an RBI single in the 11th.

A year after going 108-54 to win their third straight AL East title, the Red Sox (80-73) were knocked out during the ninth inning when Cleveland beat Philadelphia, around the time Mitch Moreland hit his second two-run homer.

Mike Brosseau and Daniel Robertson drew two-out walks in the 11th from Trevor Kelley (0-3), and Adames lined a single to left that scored pinch-runner Johnny Davis from second base.

Diego Castillo (4-8) struck out Moreland with a runner on first to end the top of the 11th.

CLEVELAND (AP) — Carlos Carrasco got his first save in five years, and Cleveland beat Philadelphia to maintain position for the second AL wild card and damage the Phillies' playoff chances.

Cleveland (91-63) is tied with Tampa Bay for the second wild card, trailing Oakland. The Indians are four games behind AL Central-leading Minnesota.

Philadelphia slipped five games behind Milwaukee for the second NL wild card and lost for the fourth time in six games.

Amed Rosario hit a two-run homer and Jeff McNeil added a solo shot for the Mets, who remained 3 1/2 games behind Milwaukee for the second NL wild card.

Cincinnati rookie Aristides Aquino led off the ninth with a homer. The midseason call-up has 17 home runs in 49 games this season.

DeGrom (10-8) struck out nine and didn't walk anybody to match his win total from last season, when he won the NL Cy Young Award.

Cincinnati is 72-82, assuring itself of a sixth straight losing season and 16th in 19 seasons.

Washington had dropped four of six. It maintained its one-game lead over Milwaukee for the top spot in the NL wild-card standings.

The Marlins became the third team to lose 100 games this season, joining the Baltimore Orioles and Detroit Tigers. Miami also had 100-loss seasons in 1998 and 2013.

Before the game, the Marlins announced manager Don Mattingly had agreed to a two-year contract extension. Mattingly was in the final year of a four-year contract.

The Nationals grabbed the lead for good on Asdrúbal Cabrera's three-run homer off Robert Dugger (0-3) in the fourth inning.

Minnesota won for the sixth time in eight games to maintain its four-game lead over Cleveland in the AL Central. It reduced its magic number to clinch the division title to five with eight games to play.

Marwin Gonzalez hit a two-run double for the Twins, and Miguel Sanó had a run-scoring triple.

Kansas City has dropped seven of eight and is one defeat away from its second consecutive 100-loss season and No. 6 in franchise history. The Royals could give the majors four 100-loss teams in a season for only the second time.

Dobnak (1-1) surrendered one run and three hits in his fourth start.

Trevor May struck out the side in his second save of the season.

Milwaukee pulled two games ahead of the Cubs for the second wild card after Chicago fell to St. Louis 2-1 earlier in the day. The Brewers trail Washington by a game for the top wild card and are three back of the NL Central-leading Cardinals.

The Pirates fell to 65-89 with their seventh straight loss.

Anderson (7-4) allowed three hits, struck out four and walked one while matching his longest outing of the season.

BALTIMORE (AP) — Félix Hernández labored through five innings in what was likely his penultimate start with Seattle, and Baltimore got home runs from Anthony Santander and Hanser Alberto in the win.

After rookie Kyle Lewis hit a two-run homer in the first inning, Hernández (1-7) gave the lead back in the bottom half after throwing just eight pitches.

NEW YORK (AP) — Star second baseman Gleyber Torres prompted an audible gasp from the Yankee Stadium crowd when his right leg buckled while fielding a grounder and made an early exit in New York's loss to Toronto.

Aaron Judge and Tyler Wade homered for the Yankees a day after they clinched the division.

Justin Smoak hit a go-ahead, two-run homer in the seventh to help Toronto match a season high with its fifth straight victory. He connected off Tommy Kahnle (3-2) as the Yankees' bullpen wobbled in the late innings for the third time in a week.

Danny Jansen also homered for the Blue Jays. Jason Adam (2-0) won in relief and Ken Giles closed for his 21st save in 22 chances.

Tim Anderson had two more hits in his pursuit of the American League batting title, and the White Sox chased Jordan Zimmermann (1-12) in the fourth.

Dylan Cease (4-7) allowed a run and five hits in six innings — the first quality start for the White Sox since Sept. 6. Cease struck out eight with two walks.

Jiménez finished a double shy of the cycle, and Yolmer Sanchez had four hits for Chicago.

The Astros have won six straight and already secured a playoff spot.

Zack Greinke (17-5) retired his first six batters before Kevan Smith hit his first pitch of the third inning into the bullpen in right-center to cut the lead to 5-1. Greinke yielded seven hits and four runs in five innings to win his third straight decision.

Roberto Osuna allowed one hit in a scoreless ninth for his 36th save.

OAKLAND, Calif. (AP) — Mike Fiers struck out five and didn't walk a batter over eight dominant innings to win for the first time in four starts, and Oakland beat Texas to maintain a two-game lead for the top AL wild card.

Chad Pinder hit a three-run homer and Mark Canha also connected as the A's (93-61) kept their margin over Cleveland and Tampa Bay (91-63).

Fiers (15-4) allowed two hits and faced the minimum, helped by a double play and a pickoff. Chris Bassitt struck out two in a perfect ninth to finish Oakland's 11th shutout in 2 hours, 38 minutes.

Arizona remained five games behind Milwaukee for the second NL wild card and also needs to overtake the Chicago Cubs and New York Mets. The Diamondbacks have won four of their last six games after losing six straight.

The 30-year-old Kelly (12-14) held the Padres to two hits and struck out nine while walking three.

LOS ANGELES (AP) — A.J. Pollock hit a three-run homer in the home half of a seven-run, fourth inning that took 41 minutes, and Los Angeles beat Colorado for its 99th victory this season.

The NL West champions improved to 14-3 against the Rockies this year, including 7-0 at home. Colorado has dropped 12 straight games at Dodger Stadium.

Clayton Kershaw (15-5) put the Dodgers in a 3-0 hole with back-to-back homers to Nolan Arenado and Charlie Blackmon in the first, and an RBI single by Tony Wolters in the second. He gave up another homer to Garrett Hampson in the fourth. Kershaw allowed four runs and eight hits in six innings, struck out five and walked one.

In the especially long inning, Colorado's three pitchers threw 61 pitches to 12 batters. The Dodgers had five hits, three walks and one batter hit by a pitch. The Rockies committed an error on a pickoff throw, too.

Corey Seager got the comeback going with a solo shot off rookie Peter Lambert (3-7). The Dodgers scored the tying and go-ahead runs on back-to-back RBI singles by pinch-hitter Kiké Hernández and Max Muncy.