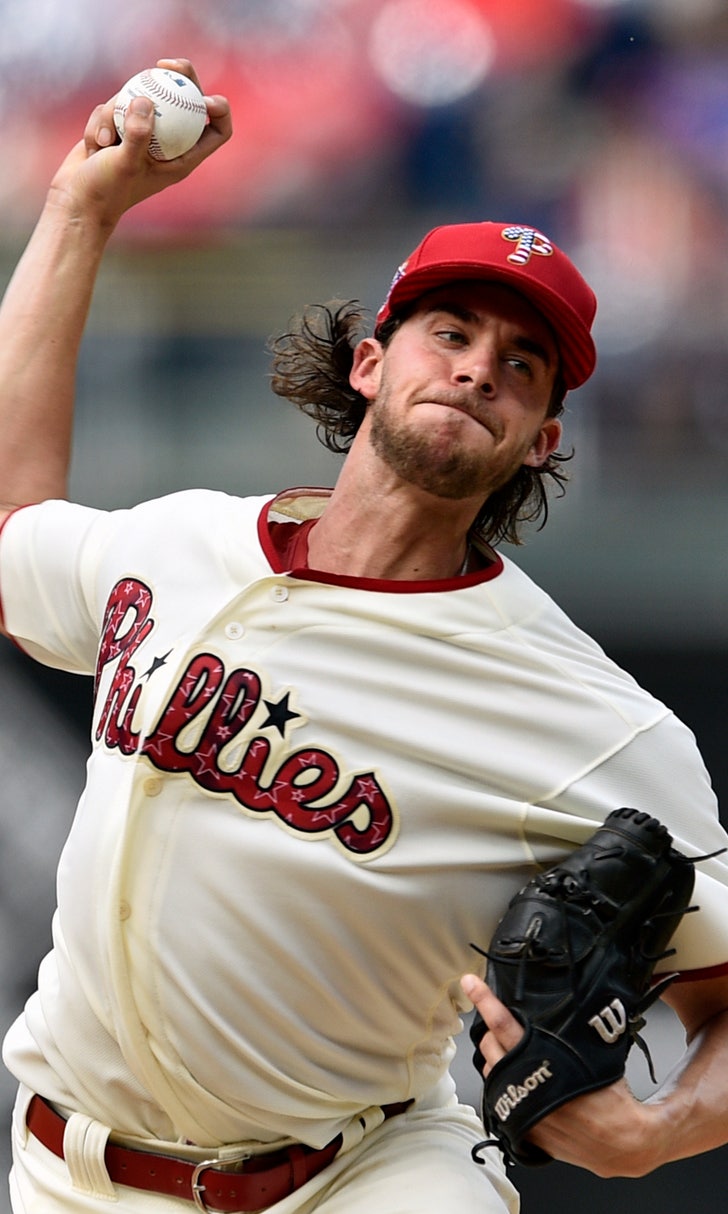 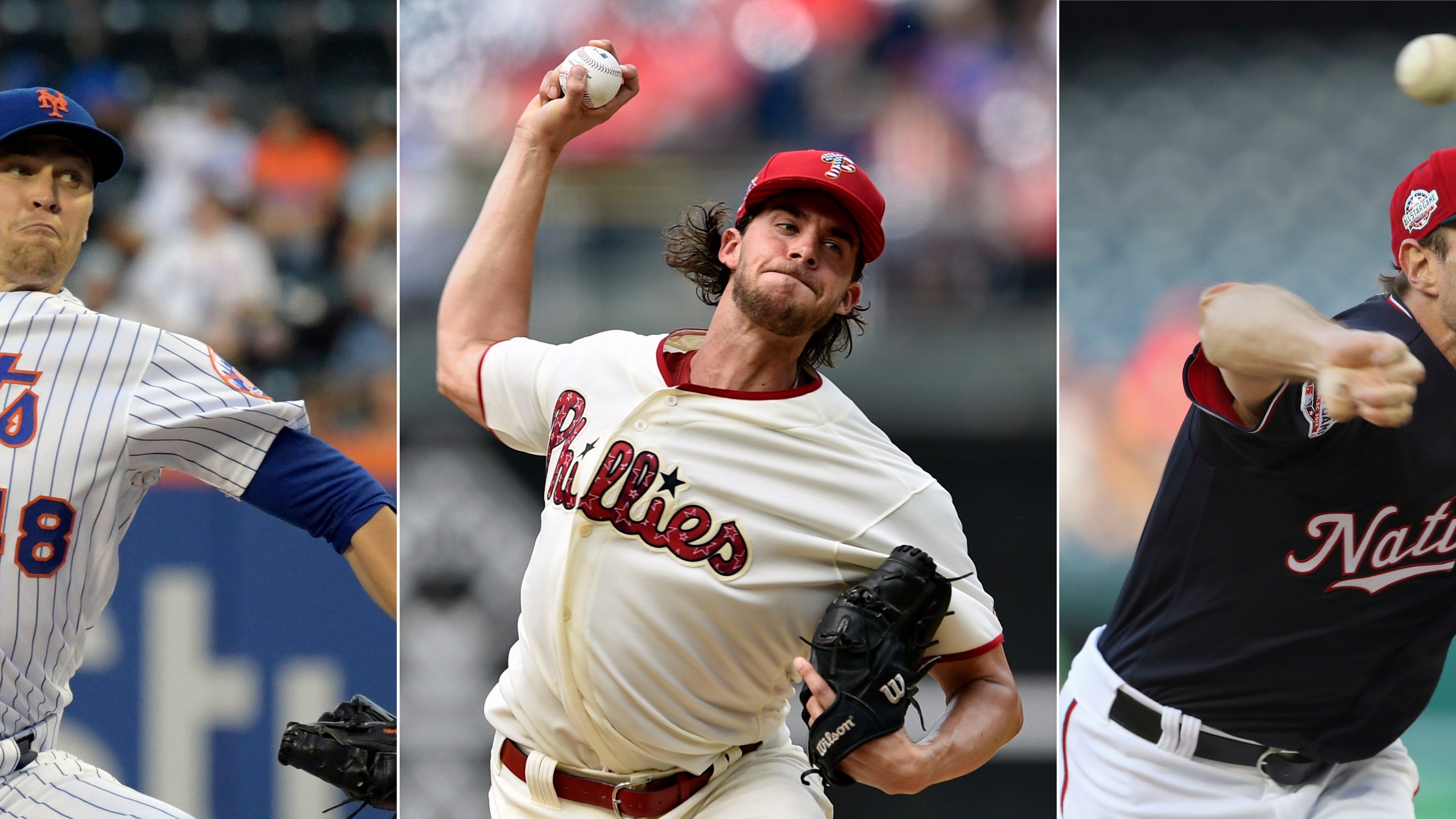 A pitcher for NL MVP? The numbers make a compelling case

Problem is, that prize might not do the trio justice. Not according to baseball's advanced analytics.

With 2½ weeks left in the season, it's time to ask: Should one of those three be MVP?

"It's the best player in the league," deGrom said. "If that happens to be a pitcher and they can win it, then it's well deserved."

There's no debating deGrom's dominance, even if it's not translating into wins for the struggling New York Mets. Scherzer's awards-season resume is more traditional, bolstered by league-leading totals in victories and strikeouts. And Nola is right there, too, in a breakout season with the Philadelphia Phillies.

But an MVP? For three pitchers who are going to miss the postseason? Some don't think pitchers should even be considered for the award, though they've won 25 times before.

The stats devised by sabermetricians suggest it would be a swing and a miss not to consider a pitcher — certainly not in a year when the crop of NL hitters just doesn't add up.

The National League has produced at least one hitter worth 6.0 wins above replacement (WAR) each season since the Chicago Cubs' Hack Wilson topped 1926 at 5.7, according to Fangraphs.

For a catch-all stat like WAR — which measures contributions on offense, defense, baserunning and pitching — that 0.6 gap from Arenado on up is nearly negligible. Can't go wrong choosing among them.

But that group is far behind the league's top pitchers by the same measure. DeGrom leads the NL with 8.1 WAR, and Scherzer, Nola and Diamondbacks ace Patrick Corbin are also ahead of the hitters. Over at Baseball-Reference, which has its own WAR formula, Scherzer (9.7) holds the top spot way ahead of Cain (6.3), with Nola, deGrom and Rockies left-hander Kyle Freeland all beating the batters.

It's unusual, but not unheard of, for a pitcher to lead a league in WAR. By Baseball-Reference's math, Clayton Kershaw did it when he won NL MVP in 2014, as did Justin Verlander for his AL MVP in 2011. Corey Kluber, Cliff Lee, Roy Halladay and Zack Greinke each did it over the past decade, too. But in the age of ever-tighter pitch counts and innings limits, it's not as common as it once was and figures to keep getting tougher.

Of the 25 pitcher MVPs, 14 were awarded before the Cy Young Award was introduced in 1956. Prior to Kershaw and Verlander, the previous pitcher winner was reliever Dennis Eckersley in 1992, and the prior starter to take MVP was Roger Clemens in 1986.

Marlins manager and 1985 AL MVP Don Mattingly was the runner-up to Clemens that year — and wasn't thrilled about it.

"Hard for me as a player, to kind of know I play 160 games or whatever it is and then somebody has 30, 35 starts," Mattingly said.

He's changed his mind since becoming a manager. Doesn't hurt that he was leading the Dodgers when Kershaw won MVP.

"If you're talking about them as Cy Young and MVPs, they're guys that are basically taking care of your bullpen that day, stopping any kind of streaks, adding to streaks — a guy you know you can count on," Mattingly said.

Mattingly has seen plenty of deGrom, Scherzer and Nola in the NL East.

"I can see where you could look at them as being most valuable player," he said.

The cases for those pitchers are a little different from their predecessors — especially for deGrom.

The Mets ace is just 8-9, putting him in the historic position of having more WAR than wins. According to Baseball-Reference's records, deGrom would be just the second qualified pitcher ever to have more WAR than wins, following Eddie Smith (4-17 record, 4.1 WAR) with the Philadelphia Athletics in 1937.

At this point, deGrom's underwhelming win total probably won't hurt him much in Cy Young balloting. Voters set aside the stat when crowning Seattle's Felix Hernandez in 2010 despite a 13-12 mark, and the electorate seems to agree that victories aren't paramount to being the best pitcher.

But to be the most valuable? Voters might still be stuck on wins there. Opinions are all over the board on how to quantify value — some voters insist MVPs have to come from winning teams, others see winning as something of a tiebreaker, and a growing number of progressive writers try to separate a player's performance from that of his teammates entirely.

That's where deGrom's candidacy could fall apart. Of the 21 starting pitchers to win MVP, all of them won at least 20 games. DeGrom is going to have a hard time winning 10.

That's not deGrom's fault, of course. He has a 1.71 ERA this season, and yet New York is 12-17 behind him thanks to minimal run support.

DeGrom has taken to helping himself, driving in four runs since Aug. 3, including New York's only RBIs in 2-1 losses to the Braves and Cubs.

Scherzer has been even better with the bat. He's hitting .270 with six RBIs and a stolen base. Those contributions won't help him stave off deGrom in his pursuit for a fourth Cy Young and third straight in the NL, but it could sway some MVP voters.

Nola's pitch seems to have lost a little steam as the Phillies have faded out of the playoff picture. Philadelphia dropped 6½ games behind Atlanta in the NL East after getting swept by the Nationals in a doubleheader Tuesday. Nola was 16-4 with a 2.29 ERA prior to a start Wednesday and wasn't far behind Scherzer with 8.9 WAR, per Baseball-Reference.

Unless a hitter separates from the pack over the final couple weeks, one of those three just might be an MVP.

"It's been done before," Mets manager Mickey Callaway said. "They should be considered."