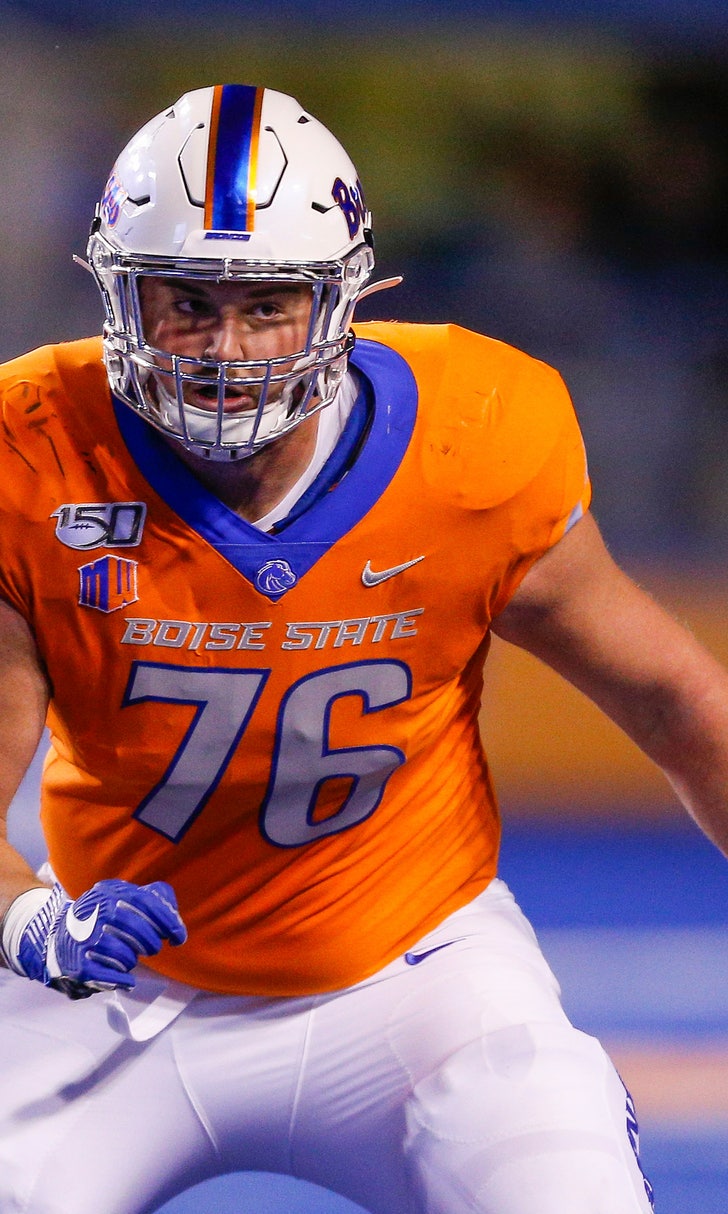 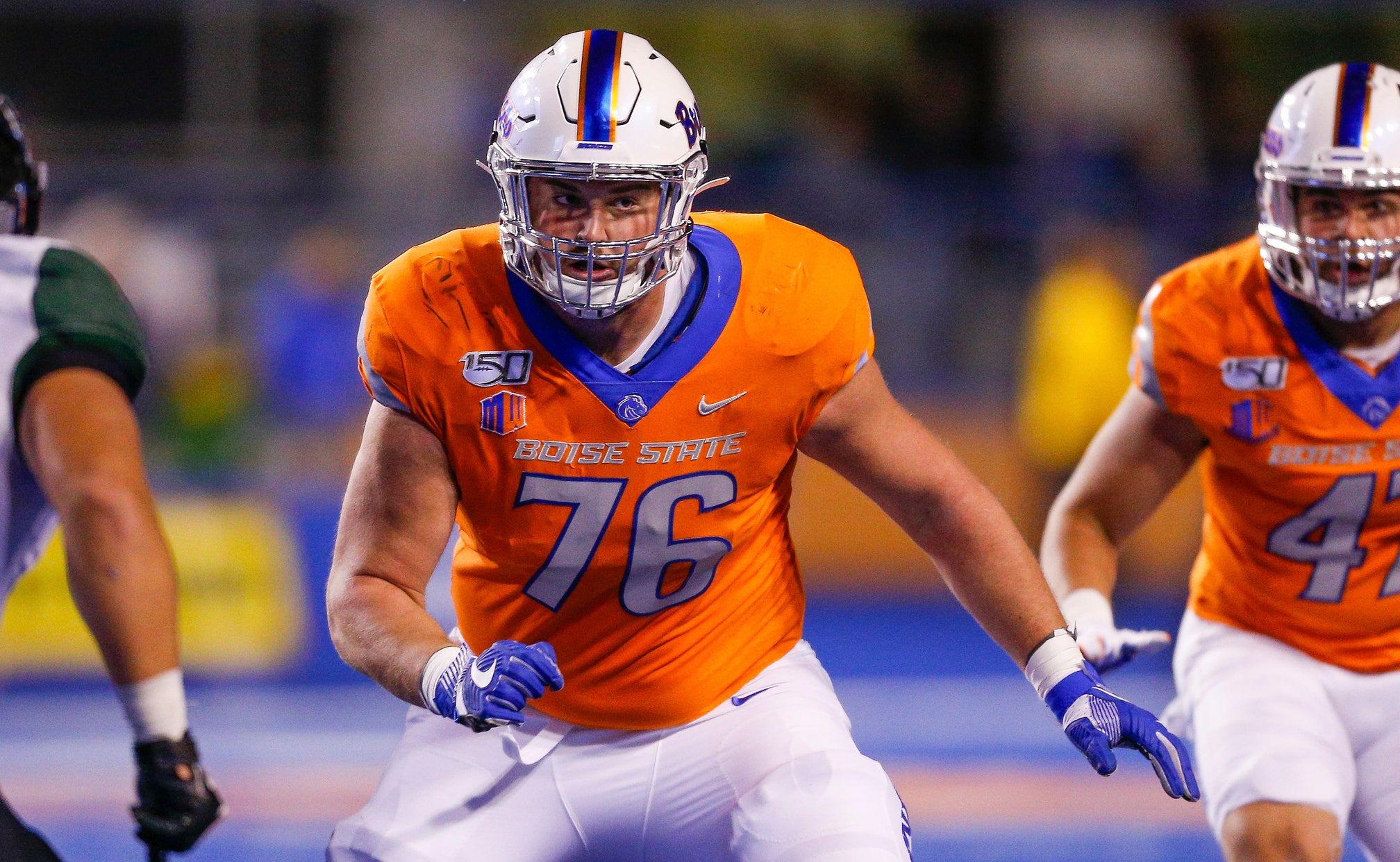 MINNEAPOLIS (AP) — The Minnesota Vikings patiently filled major needs on the offensive line and in the secondary with two more picks on Friday night, taking advantage of a deep draft without having to move up and adding three more selections for the final day for good measure.

Boise State offensive tackle Ezra Cleveland went to the Vikings in the second round at 58th overall, and Mississippi State cornerback Cameron Dantzler was their choice in the third round at 89th overall. Then they dealt the 105th pick, one of the compensatory selections at the end of the third round, to New Orleans for picks in the fourth, fifth, sixth and seventh rounds.

“You were kind of like, ‘Let’s hold our horses here and just be a little patient and see how things start to fall,’” general manager Rick Spielman said.

The 6-foot-6, 311-pound Cleveland posted some standout numbers at the scouting combine after three years as the starting left tackle for the Broncos.

His athleticism is one of his primary attributes, boasting the mobility to make zone blocks that are key to offensive coordinator Gary Kubiak’s system. Boise State ran an offense with similar tendencies and philosophies, a transitional advantage amid the virus-caused uncertainty of when rookies will actually be able to get in-person practice time with the new team.

“I think it’s a huge benefit for me to be coming from a zone type scheme and then going right back into one,” Cleveland said.

Six offensive tackles were taken in the first round, but only one was off the board in the second round when the Vikings came on the clock. Washington has been shopping seven-time Pro Bowl left tackle Trent Williams, who sat out last season in a health-related dispute with the team, but the Vikings didn’t bite and went with the rookie instead without having to give any assets up.

“We thought about going up, potentially, but we just felt like with all the players left on the board, we would just sit and wait and get our guy,” college scouting director Jamaal Stephenson said.

Cleveland was timed in the 40-yard dash at the combine in 4.93 seconds, the third-fastest among all offensive linemen. He performed 30 repetitions at 225 pounds on the bench press, the fifth-most at his position in Indianapolis two months ago.

“I’m not quite sure if he faced the kind of people that he’s going to see at the NFL level that he saw at Boise. I think there will be an adjustment, like there is for most, but he’s a smart guy,” Stephenson said. “He’ll figure it out. He loves football. He’s tough. We think he’s going to be OK.”

The Vikings have two established tackles in Riley Reiff and Brian O’Neill, so if Cleveland proves to be a quick study Reiff could move to guard. Or Cleveland might slide inside for the time being.

“The coaches will figure out the best five offensive linemen,” Spielman said.

The offensive line has been a clear area of need for the last five years, and the attempts to address that by Spielman have been rather spotty. Center Garrett Bradbury went in the first round in 2019 and O’Neill was a second-rounder in 2018, but they’re among just six offensive linemen the Vikings have taken in the first four rounds over the last five drafts. Reiff, who got a five-year, $58 million contract in 2017, is the only significant free agent signing currently on the roster.

Now Spielman will have ample opportunities on Saturday to enhance the depth up front with a whopping 13 picks — three each in the fourth, fifth and sixth rounds and four in the seventh. He will undoubtedly use the surplus to move up for certain players of interest, but the more drafted players the fewer college free agents they have to try to sign during the post-draft free-for-all.

The Vikings used their two first-round picks to fill voids at wide receiver (LSU’s Justin Jefferson) and cornerback (TCU’s Jeff Gladney). Jefferson went 22nd overall, the fifth wide receiver taken. Gladney was the 31st pick, after the Vikings moved down six spots in a swap with San Francisco that landed them extra selections in the fourth and fifth round.

After letting their top three cornerbacks from last season leave, the Vikings have places for Gladney and the 6-foot-2, 188-pound Dantzler to play right away. They’ll join Mike Hughes, Holton Hill and Kris Boyd at an especially young position group.

Dantzler ran a concerning 4.64-second 40-yard dash at the combine, but the Vikings were confident he’s faster than that and more interested in how well he fared against the best SEC competition including Jefferson’s national champion LSU squad.

Dantzler already has one of the best nicknames on the team: “The Needle.”

“Because I was always skinny,” he said, “but when I hit you, it hurt.”