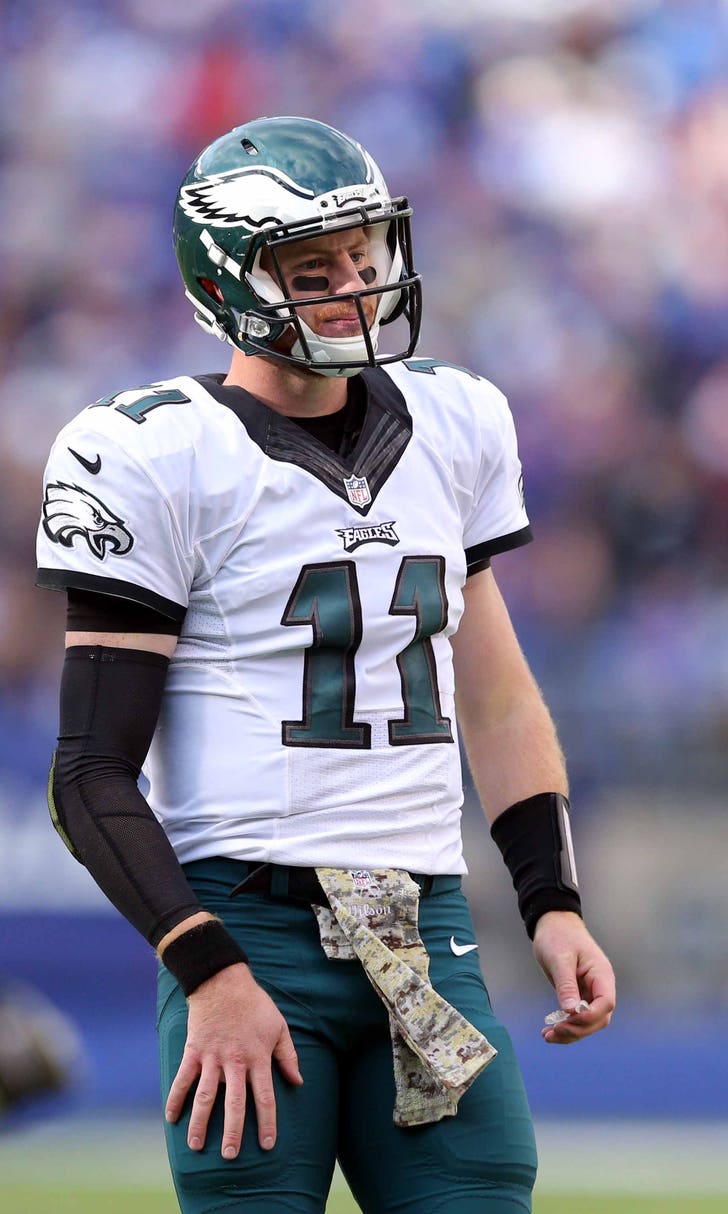 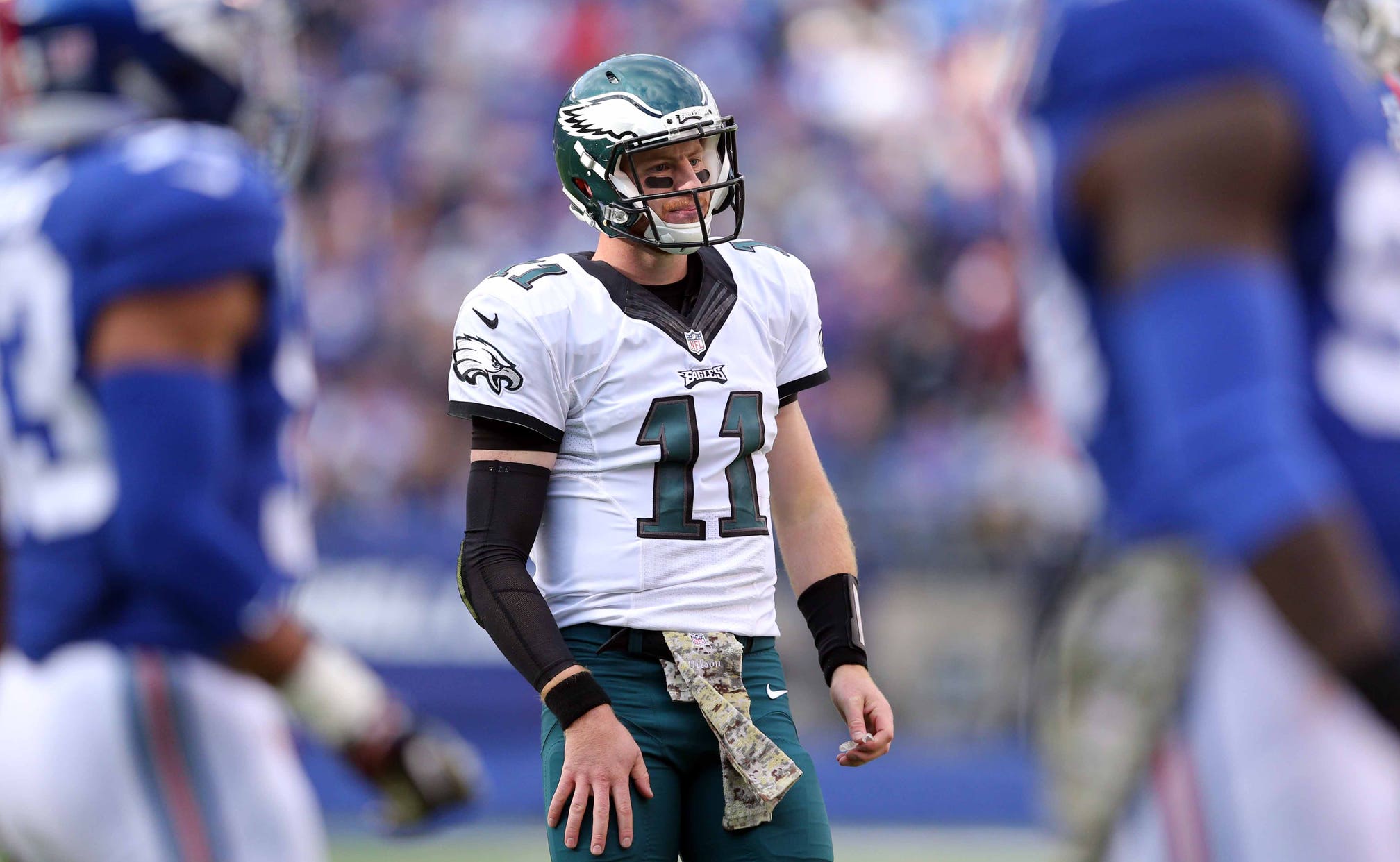 How the free-falling, last-place Eagles handed victory to the Giants 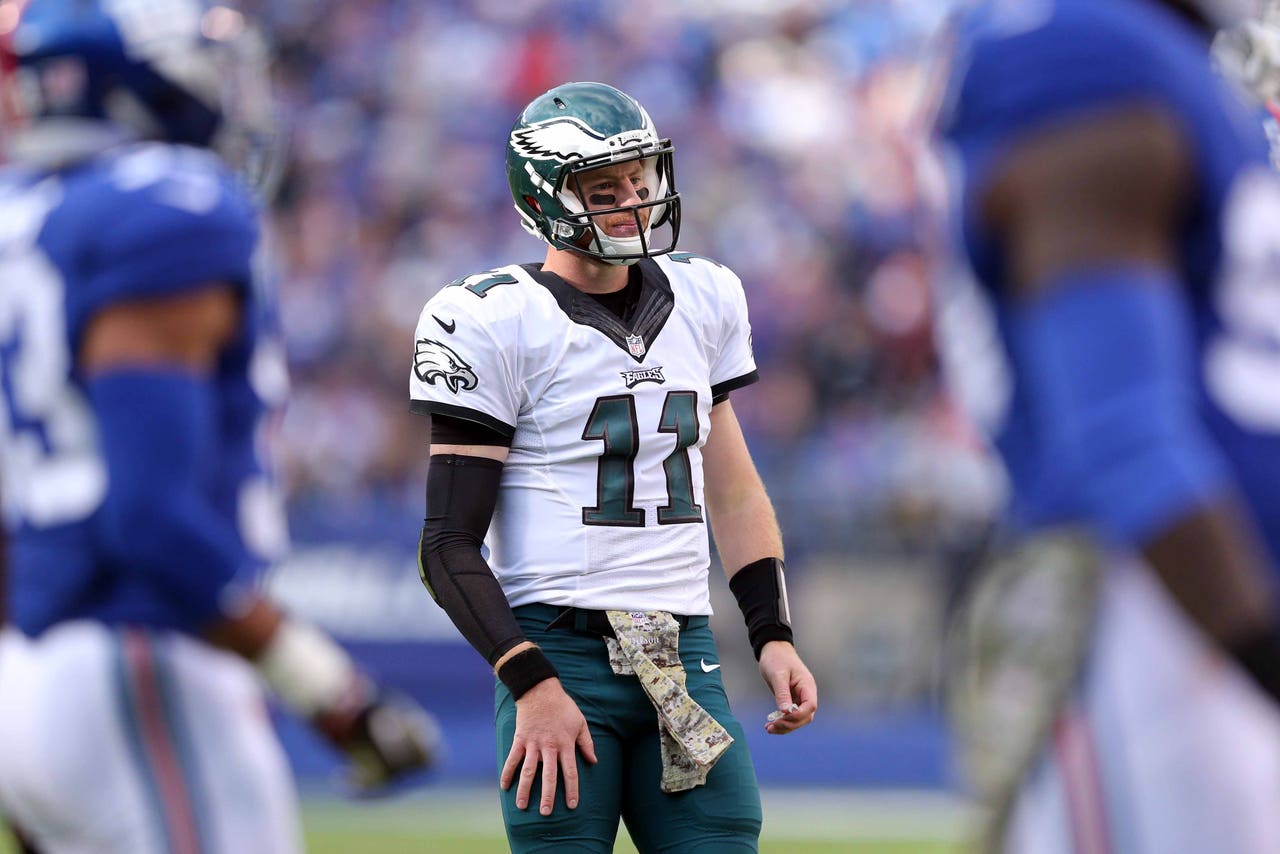 Second-guessing will be the theme of the week in Philadephia after Doug Pederson and the Eagles left a victory in New York following a series of baffling, backfiring decisions. Among them:

• Pederson wasted a challenge on a play in which an Eli Manning pass was momentarily caught but then quickly stripped away by Philadelphia -- an easy incompletion call for the officials. But Pederson challenged because after the strip the Eagles "recovered" the ball. Thus, he was hoping (hoping being the operative word) the ref would determine that the Giants had indeed caught the ball, fumbled and saw it recovered by Philadelphia. Both live and on full-speed replay, there was exactly zero doubt that the call on the field was correct. But Pederson did that thing NFL coaches do where they challenge because they really, really, really want something to be true. It cost Philadelphia a crucial timeout.

• Down eight points with 6:12 left, Pederson went for a 4th-and-9 from the New York 46-yard line. Philly had turned around field position, so a nice punt and another anemic Giants drive would have put the Eagles back in the same spot. This one succeeded, however and led to a Philadelphia field goal to make it 28-23.

Those four moments fundamentally altered the trajectory of the NFC East battle and ultimately played a major role in the Eagles falling to 4-4 after a 3-0 start and into last place in the super-competitive division.

Going for the first fourth down was a great decision. I loved it -- gutsy and showing confidence in an offense led by a rookie quarterback. The problem wasn't with the call, it was with the play call. Carson Wentz lined up in a shotgun and rolled left to the short side of the field. If you'd told the Giants which play was coming, I doubt they could have played it any better. Wentz was stuffed four yards behind the line of scrimmage. Yes, the Eagles basically gave up three points, but down 14-3 it was a justifiable risk. You move on.

The next fourth down was not. It wasn't a good decision. Or a reasonable decision. Or a slightly defensible decision. The Giants offense was struggling after those opening two touchdowns, and it was clear this would be a game decided long after this possession. Get the points and get off the field. The Eagles didn't, and it's because Pederson seemed like he was trying to make up for failing to take the three points earlier in the half by doubling down. We didn't get three points on that possession, so let's get seven here to square it. As anybody who's gambled and tried to make up losses by going all-in with the next bet knows, such strategy rarely works. Philly started that possession on the Giants' 15-yard line after a 66-yard punt return by Darren Sproles, by the way. They went four-and-out.

As the clock started to wind down, you couldn't help but do the math, adding three or six points to the Eagles total every time you checked the score. Two-possession games became one. Being a touchdown and two-point conversion down should have been a field goal from taking the lead. When Philly picked off Manning with 1:48 left in the game, the Eagles needed a touchdown to go ahead. But they were down 28-23 in a game in which they passed up two field goals. At worst it should have been 28-26. In that situation, the Eagles could have milked the clock before hitting a go-ahead field goal.

What if? What if? What if? You can play that game all day. Every team, with the exception of the one-loss Patriots (who weren't in that game they lost), can look back to one game on their schedule that could have gone the other way if only they'd done this, that or the other thing. For the Eagles, who have now dropped four of five and are looking up at three teams in their division, this one will gnaw at their minds more than any other.

Put it all aside though. Forget the bad play call, the make-up fourth-down call it brought, the bad challenge, the dropped passes and everything else. Ignore all of it. With 1:48 left and still down those five points, the Eagles defense picked off Manning and put the offense 18 yards away from a game-winning touchdown. On four plays, the offense gained exactly zero yards. Zippy. It was the second time the Eagles defense or special teams had given the offense possession inside the New York red zone and the second time Wentz and Co. had failed to come away with points.

Bad decisions hurt a football team. But bad execution is what kills them. 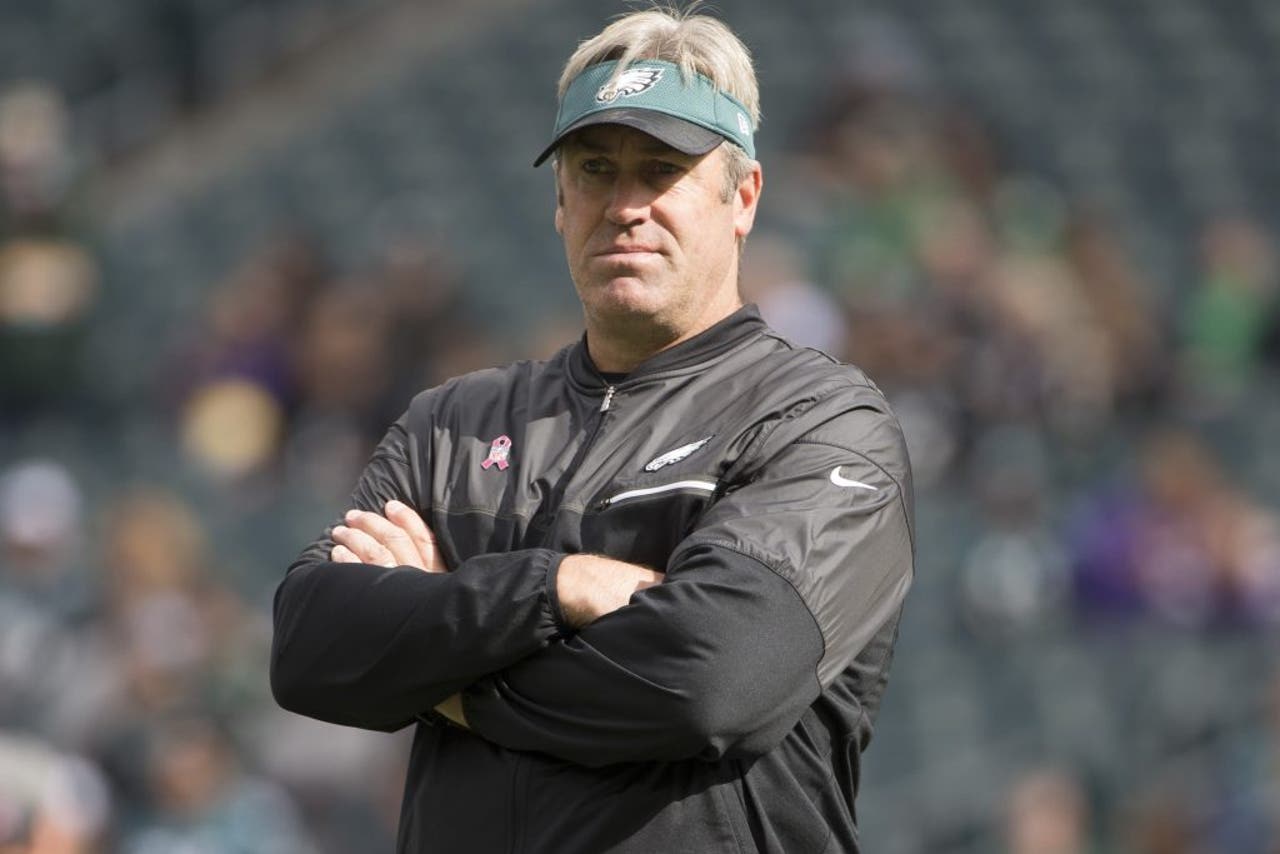 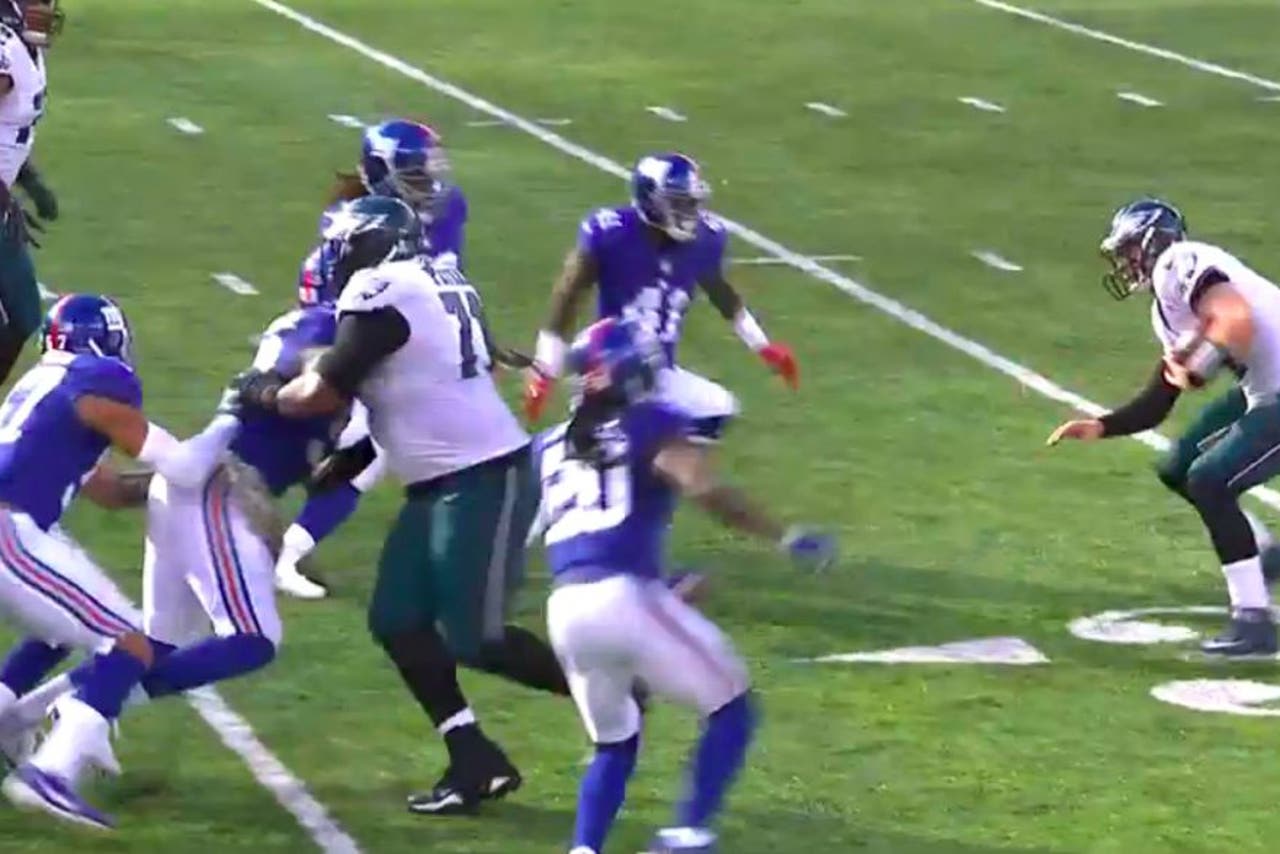 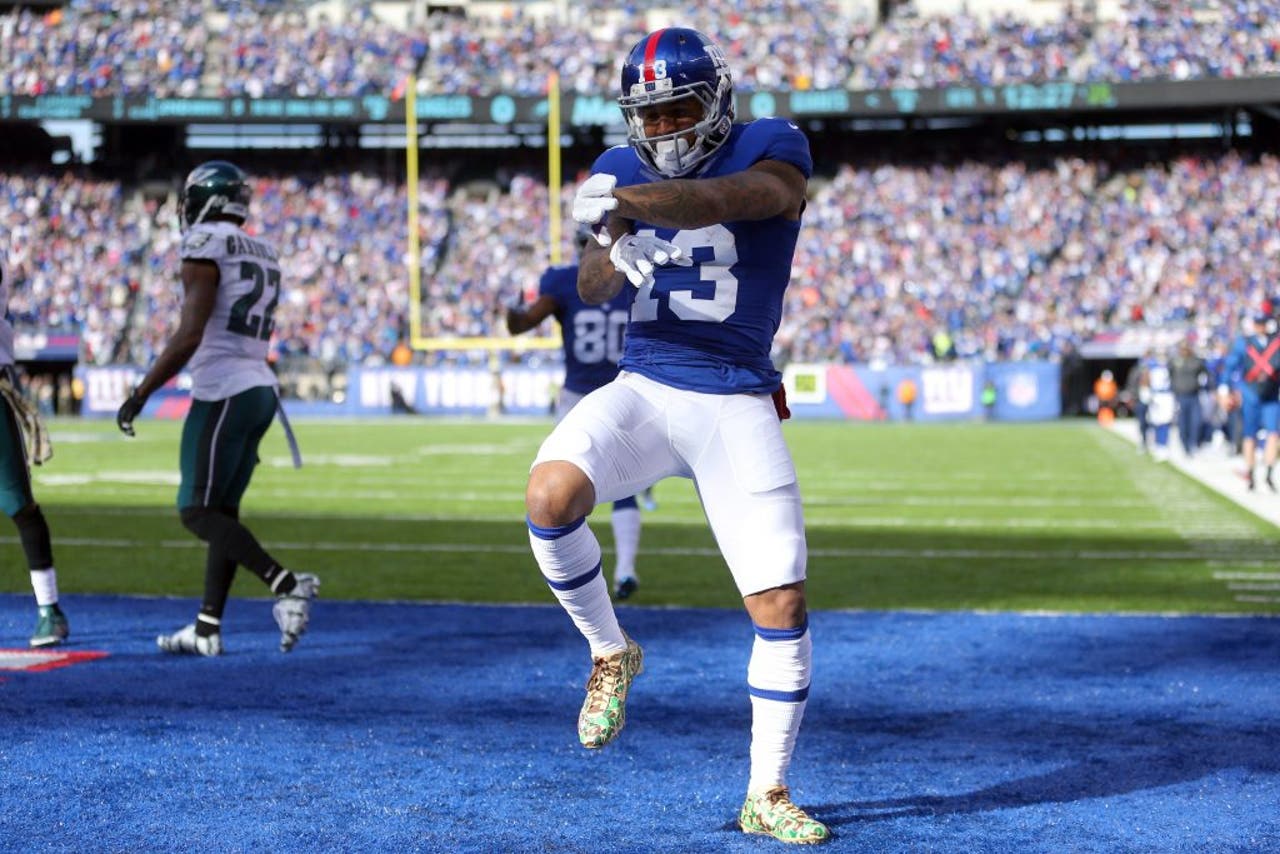 Eagles Rally Late, Beat Giants
Somehow, at 2-4-1, the Philadelphia Eagles are in sole possession of first place in the NFC East after Thursday's win.
20 hours ago

Twitter Fingers: Rumbling and Stumbling
Daniel Jones' near-90 yard touchdown run quickly went from a glorious highlight to a Twitter-user's dream.
21 hours ago

Starring Role
Andy Dalton is the next man up in Dallas. Can he guide the Cowboys to an NFC East crown in his first season?
6 days ago
those were the latest stories
Want to see more?
View All Stories
Fox Sports™ and © 2020 Fox Media LLC and Fox Sports Interactive Media, LLC. All rights reserved. Use of this website (including any and all parts and components) constitutes your acceptance of these Terms of Use and Updated Privacy Policy. Advertising Choices. Do Not Sell my Personal Info