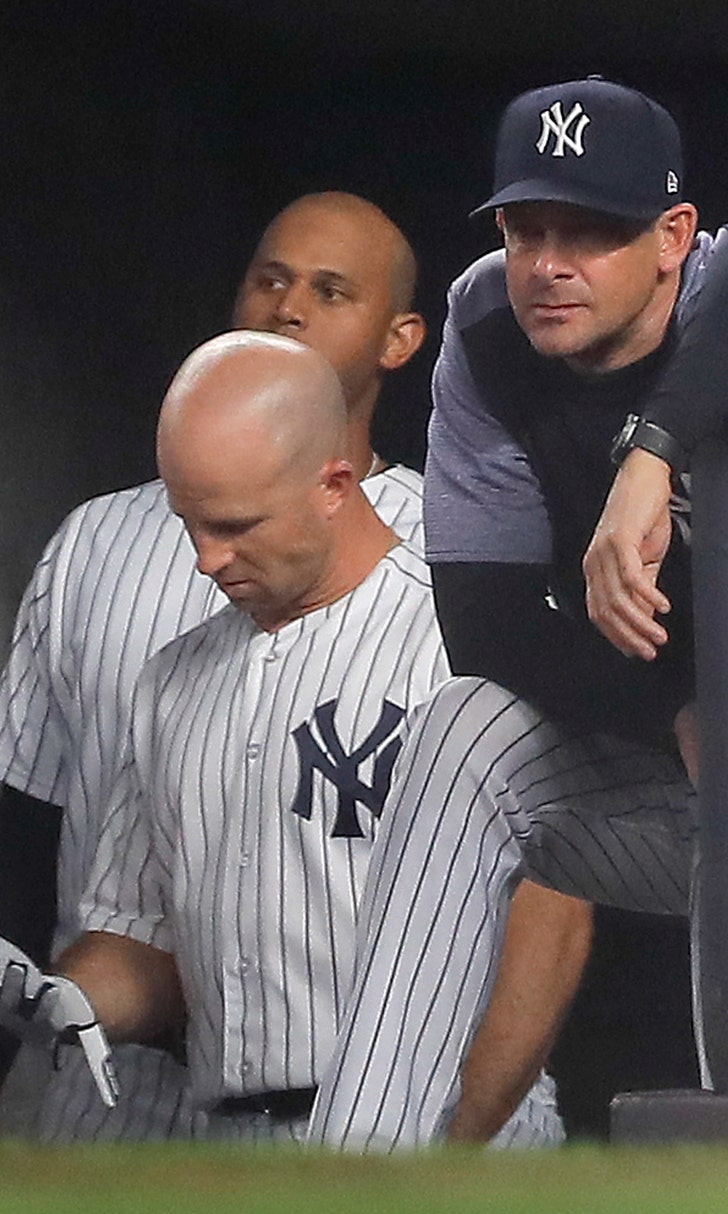 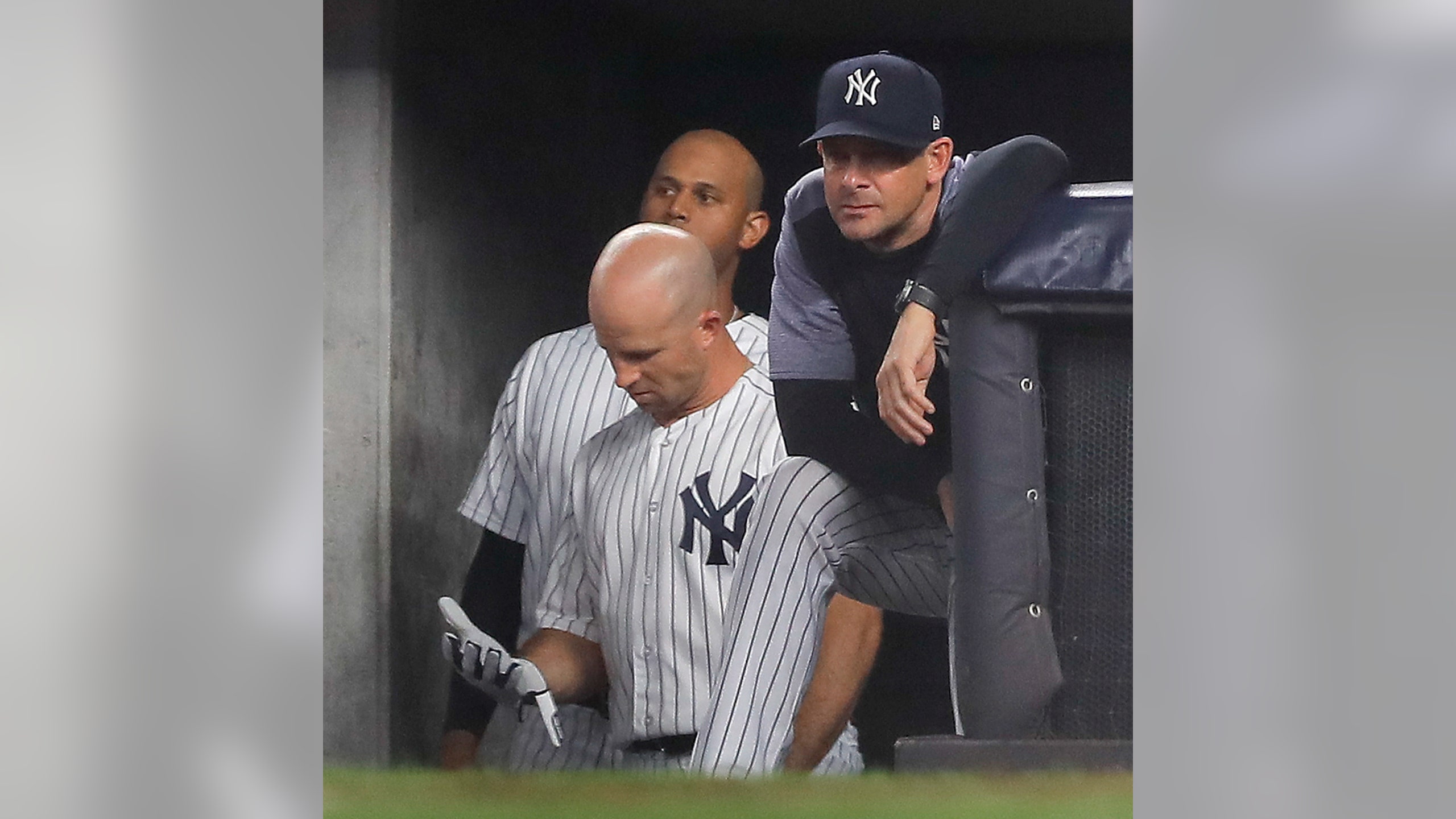 Yankees in danger of decade without World Series

NEW YORK (AP) — The Yankees are in danger of going an entire decade without reaching a World Series for the first time since the 1910s.

Aaron Boone's rookie season as a manager ended in failure when New York fizzled in the AL Division Series against Boston and was eliminated in four games.

A year after losing in the AL Championship Series was perceived as success, elimination by Boston left a feeling of failure for the title-worshipping Yankees.

New York went 100-62 for its best record since its last World Series championship in 2009, yet finished eight games back of the Red Sox. The Yankees have gone six straight seasons without a first-place finish.

They're set to retool around the young core of Aaron Judge, Gary Sanchez, Gleyber Torres, Miguel Andujar and Luis Severino, plus in-prime regulars Giancarlo Stanton, Didi Gregorius and Aaron Hicks. The Yankees got the power but were plagued by inconsistent production on nights the long ball was lacking.

New York drove in 432 of its 851 runs on homers, at 50.8 the highest percentage in the major leagues, according to the Elias Sports Bureau. The Yankees also were 10-21 when failing to homer, according to Sports Info Solutions.

While they set a big league record with 267 home runs, they were 16th in batting average at .249, eighth in on-base percentage at .329 and tied for 25th in stolen bases with 63. They also were eighth in strikeouts, topped by Stanton's career-high 211 and Judge's 152 in two-thirds of a season.

"The collection happens to be home runs and strikeout versus home runs along with contact and high averages," general manager Brian Cashman said last month.

First up will be a decision on New York's $12.5 million option on 35-year-old outfielder Brett Gardner, who has been with the Yankees big league team since 2008.

"Got a lot of young guys in this room. The future is bright," he said.

If the Yankees choose to pay a $2 million buyout and let Gardner go, Andujar could be moved from third base — where his range is limited — to the outfield. That would open third base for Manny Machado, one of the premier players on the free-agent market along with Bryce Harper.

And with Gregorius and Hicks eligible for free agency after the 2019 season, it would not be surprising if the Yankees trade the shortstop, outfielder or both when they are coming off superb seasons.

First base remains the position most in flux. Luke Voit was obtained from St. Louis in July and took over from Greg Bird, who returned in mid-May following foot surgery and couldn't shake what became a puzzling season-long slump.

And catcher remains a concern because of Sanchez's season-long struggles, both offensively and defensively.

Cashman's priority is likely to be pitching, and Dallas Keuchel and Patrick Corbin are among the free agent options. Yankees starters averaged 5 1/3 innings, 18th in the majors, according to Sports Info.

Only Severino and Tanaka appear assured of rotation spots among the current group. Left-hander CC Sabathia is set to become a free agent again at age 38, and he didn't get an out in the seventh inning during the second half of the season.

"We've got a lot of talent, and I want to be a part of seeing this thing through, because it's going to go through," he said.

J.A. Happ, a lefty obtained in July, will be 36 this month but could be offered a chance to stay. He was 7-0 down the stretch but lost the opener against the Red Sox. Righty Lance Lynn, also acquired in the summer, is also a free agent but probably will move on. Sonny Gray, flustered by the intensity of impatient and passionate fans, likely would be better off if he is traded to a smaller market.

Relievers David Robertson and Zach Britton also are set to become free agents, and New York might try to re-sign one or both to remain in a formidable bullpen headed by Aroldis Chapman and Dellin Betances.

Outfielder Andrew McCutchen also is set to go on the market along with infielders Neil Walker and Adeiny Hechavarria.

"We're chasing the perfect offense," Boone said. "Unfortunately, it wasn't good enough, and we'll continue to work at getting to that point where we're as complete in every department as we can be: offensively, pitching, defense."

With a nod and a wink
Trevor Bauer is new to the Dodgers-Padres rivalry, but he didn't hesitate to jump in with both feet, and one eye closed.
2 hours ago

Spring Training Sights And Sounds
Baseball is back, as the Cactus and Grapefruit Leagues take the field to start spring training. Check out Day 1's best moments!
6 days ago
those were the latest stories
Want to see more?
View All Stories
Fox Sports™ and © 2021 Fox Media LLC and Fox Sports Interactive Media, LLC. All rights reserved. Use of this website (including any and all parts and components) constitutes your acceptance of these Terms of Use and Updated Privacy Policy. Advertising Choices. Do Not Sell my Personal Info