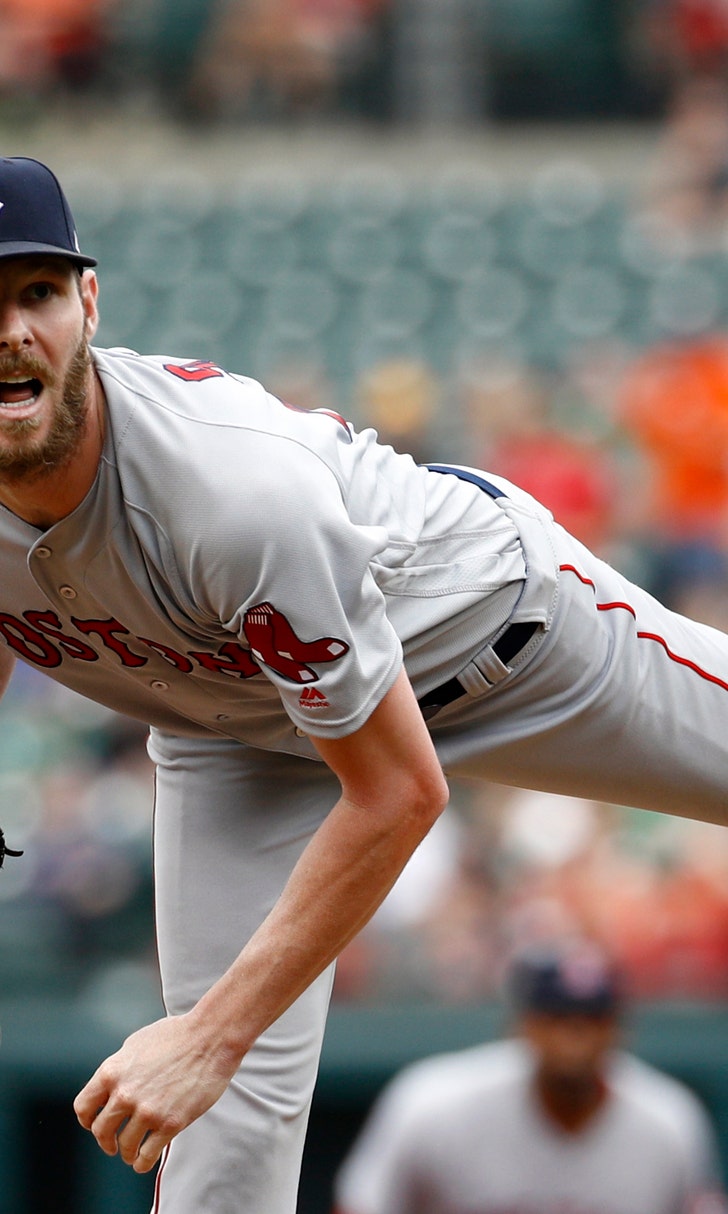 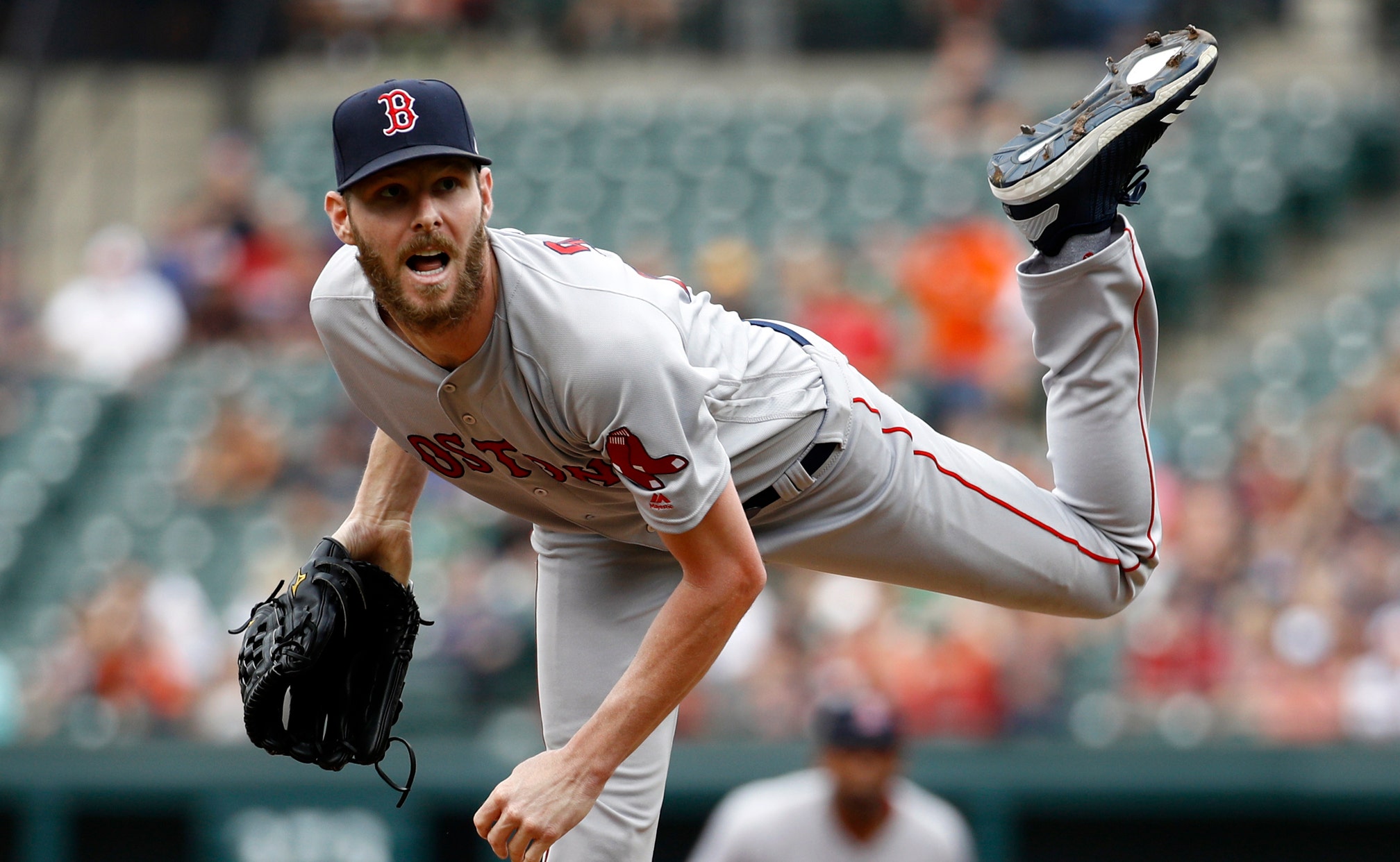 CHICAGO (AP) — Pinch-hitter David Bote smashed a grand slam against Ryan Madson with two outs in the ninth inning to lift the Chicago Cubs to a 4-3 victory over the Washington Nationals on Sunday night.

Madson (2-5) came in with a 3-0 lead to start the ninth and quickly ran into trouble. He gave up an infield single to Jason Heyward with one out and hit Albert Almora with a pitch. Madson then retired Kyle Schwarber on a foul pop before hitting Contreras to load the bases, but Bote drove a 2-2 pitch well beyond the center-field wall.

Bote's drive made a winner of Justin Wilson (4-3), who got the final two outs in the ninth.

BALTIMORE (AP) — Chris Sale celebrated his return from the disabled list by striking out 12 over five dominant innings, and the Boston Red Sox moved 50 games over .500 by completing a sweep of the lowly Orioles.

Sale (12-4) was placed on the DL on July 28 with left shoulder inflammation. Judging by his performance, the injury is no longer an issue.

The left-hander allowed just one hit, a clean third-inning single to left field by Renato Nunez, and walked none. Craig Kimbrel, the last of five Boston relievers, worked the ninth for his 35th save.

Alex Cobb (3-15) took the loss despite allowing only two runs, one earned, over seven innings.

HOUSTON (AP) — Ryon Healy hit a tying homer with two out in the ninth inning, Mitch Haniger delivered an RBI double in the 10th and the Mariners swept a four-game series from the AL West-leading Astros.

It's the first time in franchise history that Seattle swept a four-game series from Houston. The third-place Mariners pulled within four games of the Astros.

Healy's solo drive off Hector Rondon made it 3-all. Pinch-hitter Dee Gordon singled against Roberto Osuna (1-1) with one out in the 10th, and the speedster easily scored on Haniger's double that skipped down the left field line.

DENVER (AP) — Chris Iannetta drew a bases-loaded walk with two out in the ninth inning, and the Rockies beat the Dodgers after squandering a late lead.

It was the second walk-off win in as many days for Colorado. Ryan McMahon lined a three-run homer in the ninth on Saturday.

McMahon was walked intentionally to load the bases for Iannetta, who drew a five-pitch walk off Dylan Floro (4-3).

The loss dropped the Dodgers out of a first-place tie with Arizona in the NL West.

Wade Davis (2-6) pitched a shaky ninth for the win after Colorado failed to protect a 3-0 lead.

Didi Gregorius also homered and turned in a nifty defensive play for New York. Sabathia (7-4) allowed one hit in his first win since July 4.

Joey Gallo had two hits for Texas, which dropped three of four in the series. He also reached over the left-field wall to take a home run away from Austin Romine in the eighth.

Stanton hit his 30th homer, giving New York a first-inning lead for the second straight day by connecting off Martin Perez (2-5). The slugger has five homers in his last six games.

The Cardinals moved eight games above .500, equaling their season high set on June 11, and improved to a National League-best 12-4 since July 27.

Molina's bases-loaded single scored Harrison Bader and Patrick Wisdom, who had two hits, drove in a run and scored twice in his major league debut.

Tyson Ross (7-9) pitched six solid innings in his St. Louis debut after he was claimed him on waivers last week from San Diego. Ross stepped in for Luke Weaver, who was scratched after cutting his right index finger on the aluminum foil cover of his clubhouse meal on Saturday night.

ATLANTA (AP) — Ozzie Albies led off the seventh inning with a tiebreaking homer, one of three for Atlanta, and the Braves overcame 19 hits by Milwaukee.

Ronald Acuna Jr. and Dansby Swanson each hit a two-run homer for Atlanta, which took two of three in a matchup of playoff contenders. Jonny Venters (2-1) pitched a scoreless inning for the win, and A.J. Minter worked the ninth for his 10th save.

Jesus Aguilar hit a three-run homer and drove in four runs for Milwaukee. The Brewers left 13 runners on base.

Albies gave Atlanta the lead by lining his 21st homer over the left-field wall on a slider from Dan Jennings (4-4).

ANAHEIM, Calif. (AP) — Jed Lowrie homered and moved over 1,000 hits for his career, and Oakland held on for its ninth win in 11 games.

The A's, who currently occupy the second AL wild-card spot, moved within 2 1/2 games of first-place Houston in the AL West.

Fernando Rodney (4-2) pitched a scoreless inning for his first victory with Oakland. Blake Treinen struck out the side in the ninth for his 30th save.

Last-place Cincinnati had won three of four, including the first two games of the weekend series. Jose Peraza and Eugenio Suarez each had two hits, but Luis Castillo (6-10) was tagged for five runs and five hits in 5 2/3 innings.

Galvis connected against Jake Arrieta (9-7) in the third inning, hitting a two-out drive to center for his first career slam. It was his third homer in his last seven games and No. 8 on the season.

Carlos Carrasco struck out nine in seven innings, and the Indians held on for the win.

AL Central-leading Cleveland had a 9-1 lead heading into the bottom of the eighth, and almost blew it. Run-scoring singles by Tim Anderson and Kevan Smith trimmed the Indians' lead to 9-5 in the ninth before manager Terry Francona replaced Dan Otero with Cody Allen.

Adam Engel greeted the closer with a two-run triple before Allen struck out Nicky Delmonico and Yolmer Sanchez for his 23rd save in 26 chances.

Carrasco (14-6) allowed three hits. Melky Cabrera hit a three-run homer against one of his former teams, helping the Indians take two of three in the series.

Rodriguez (6-1) allowed one run, struck out four and walked one. Will Smith pitched the ninth for his eighth save.

Nick Hundley and Joe Panik each drove in two runs for the Giants, and Gorkys Hernandez scored twice.

The game started 20 minutes late because of the ceremony to retire Morris' No. 47 jersey. Morris and longtime teammate Alan Trammell were inducted into the Hall of Fame earlier this month.

Boyd (7-10) won for the third time in four starts, giving up one run and two hits. Shane Greene pitched the ninth for his 25th save.

MIAMI (AP) — Jose Reyes hit a two-run homer and Noah Syndergaard struck out seven in seven innings, leading the Mets to the victory.

Michael Conforto also connected for New York, which took two of three in the weekend series. Wilmer Flores knocked in a run with a sacrifice fly.

Syndergaard (8-2) allowed three runs and seven hits. He improved to 4-1 in his last five starts.

Seth Lugo worked around two hits in the ninth while recording his first career save.

Devon Travis had two hits and drove in a run as Toronto won for the second time in nine meetings with Tampa Bay.

Tampa Bay's lone run came in the fourth on a two-out RBI single by Willy Adames.

Jaime Garcia (3-6) worked one inning for the win. Ken Giles got three outs for his 13th save in 13 opportunities.

Tampa Bay's Jose Alvarado (1-5) got one out and was charged with a run and two hits.