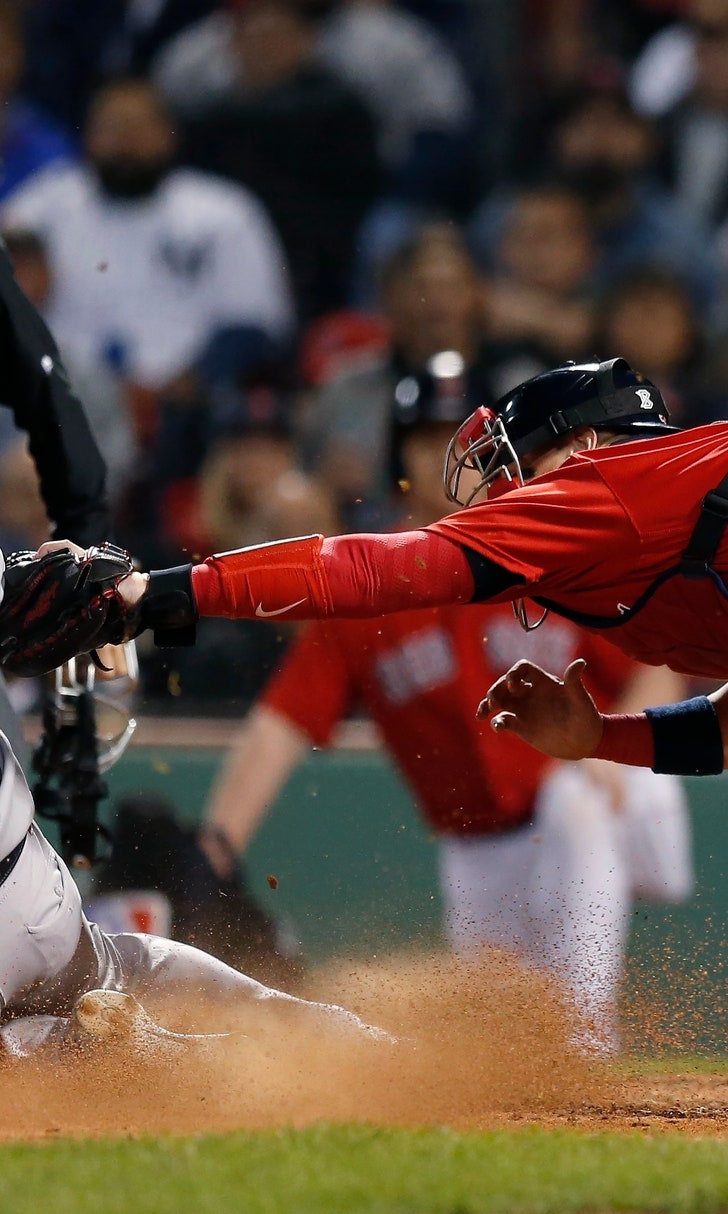 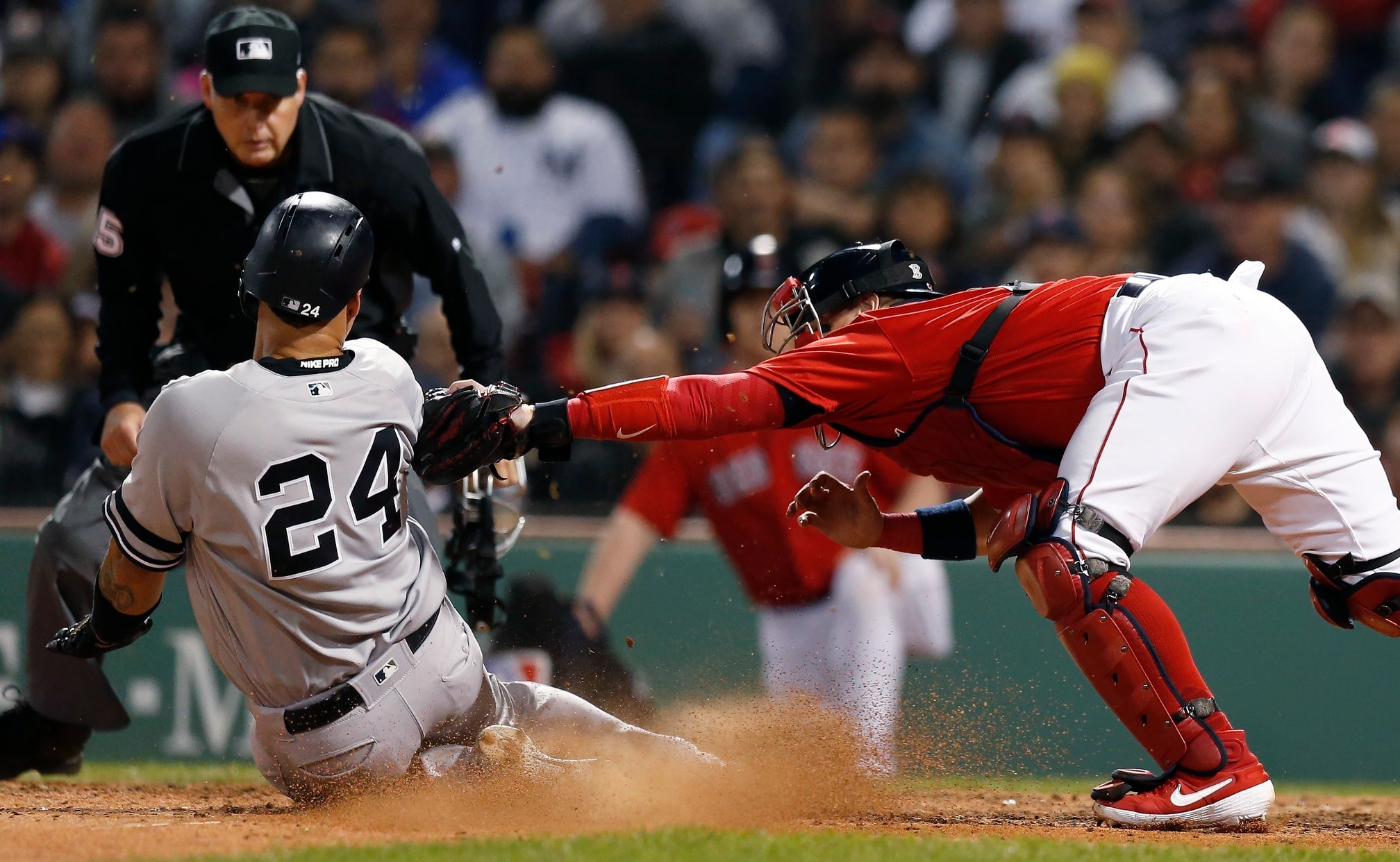 BOSTON (AP) — Mitch Moreland hit a three-run homer and seven pitchers combined on a three-hitter to lead the Boston Red Sox to a 6-1 victory over the New York Yankees on Friday night.

Xander Bogaerts added a two-run double and Moreland two singles for the Red Sox, who won for the 13th time in 19 games. The defending World Series champions remained 6 1/2 games out of the AL's second wild-card spot with 21 games to play.

Brett Gardner homered for AL East-leading New York, which lost for just the third time in 11 games. The Yankees lead atop the East dropped to 8 1/2 games over Tampa Bay, a 5-0 winner at home against Toronto.

The NL East-leading Braves have won eight in a row, 19 of 23 overall and 12 consecutive at home, dropping Washington nine games back. It was Atlanta's fourth straight victory and eighth in 11 tries over the Nationals.

Shane Greene earned his first save in three tries with Atlanta and 23rd overall after facing the minimum with two strikeouts in the ninth.

Francisco Lindor drove in another run with an infield single off Graterol. Then Oscar Mercado, who tied the game in the eighth by scoring on a one-out sacrifice fly by Yasiel Puig after hitting a leadoff triple off Sergio Romo, tacked on a two-run single against Trevor Hildenberger, the seventh reliever for the Twins after a stellar start by Michael Pineda.

Tyler Clippard (1-0) struck out three of four batters he faced for the victory, and Nick Goody fanned two of three in a perfect 11th to finish it.

The Twins had their "magic number" for clinching the Central stay at 14, meaning any combination of their wins and losses by the Indians reaching that total.

New York took a 4-2 lead in the bottom of the eighth on RBI singles by Alonso and Wilson Ramos. However, embattled closer Edwin Diaz (2-7) gave up a one-out, two-run homer to J.T. Realmuto in the top of the ninth.

However, the Mets bailed out Diaz when Mike Morin (1-2) retired the first two batters he faced before Juan Lagares singled to left-center. Lagares went to third when J.D. Davis, pinch-hitting for Diaz, got ahead 3-0 before singling to left on a full-count pitch.

Nick Vincent then plunked Jeff McNeil with an 0-2 pitch to load the bases. Alonso walked on a full count and then had his uniform torn off by teammates as he reached first base.

Phillies starter Zach Eflin allowed two runs and six hits with no walks while striking out six over five innings.

Milwaukee pulled within four games of Chicago for the second NL wild card. The Cubs, who had won their last six road games, remained 2½ back of NL Central-leading St. Louis, which lost 9-4 at Pittsburgh.

Randal Grichuk was lone Toronto baserunner through eight innings, reaching on his two-out opposite-field triple in the first off McKay.

The Blue Jays threatened in ninth against 29-year old Cole Sulser, who was making his major league debut. Danny Jansen had a leadoff walk, Anthony Alford grounded a single to left and Bo Bichette walked to load the bases with no outs and chase Sulser, who had a 1-2-3 eighth. Emilio Pagan retired Teoscar Hernandez on a pop-up, struck out Grichuk and got a fly from Vladimir Guerrero Jr. to get this 19th save.

Clay Buchholz (1-4) gave up four runs and seven hits over in six innings for the Blue Jays, who have lost 14 of 17.

Texas trailed 6-4 before rallying in the seventh. Elvis Andrus had the big blow, a two-run single that put the Rangers ahead to stay.

Despite battling a stomach ailment, Texas rookie Brock Burke still managed to get through five innings. He was charged with six runs and six hits.

Brett Martin (2-3) worked a scoreless sixth inning for the win, and José Leclerc got three outs for his 11th save.

Lopez (3-7) struck out six in his longest outing since May 3, when went seven innings against Detroit. Ian Kennedy earned his 27th save.

Whit Merrifield and Ryan O'Hearn each had two hits and an RBI for the Royals, who have won five of six.

Dozier hit his 25th homer, a solo shot off Miami reliever Jeff Brigham in the eighth.

The Marlins were shut out for the 21st time this season.

Pablo Lopez (5-8) had his longest outing since returning from the injured list Aug. 26. He lasted 6 1/3 innings, allowed two runs, eight hits and struck out four.

Last-place Pittsburgh scored each of its runs in the seventh with two outs. Josh Bell hit a two-run single off Andrew Miller. After run-scoring hits by pinch hitter Melky Cabrera and José Osuna, Frazier made it 7-4 when he tripled high off the 21-foot wall in right field.

The NL Central-leading Cardinals had won six of eight. Miller (4-5), the second of three relievers in the seventh, got just one out and was charged with three runs and three hits.

OAKLAND, Calif. (AP) — Chad Pinder homered, Mike Fiers earned the victory and Oakland beat Detroit in a game that was suspended on May 19 because of the weather.

Fiers (14-3) is unbeaten over 21 starts dating to his no-hitter May 7. He allowed three runs and four hits over six innings.

It took 39 minutes to finish the 2-hour, 58-minute game half a country away.

The victory gave the A's their first 11-game winning streak since winning 20 straight in 2002 and the longest in the majors this season.

Stephen Piscotty had three hits, not playing at all Friday as he's on the injured list.

In the regularly scheduled game, Willi Castro hit a go-ahead double in the top of the 11th as the Tigers rallied from a four-run deficit to snap Oakland's three-game winning streak.

Christin Stewart hit a two-run homer in the seventh for the Tigers, and John Schreiber (1-0) recorded two outs in the 10th for his first major league win.

CHICAGO (AP) — Brian Goodwin's two-run homer in the eighth inning tied the game, and Justin Upton hit a solo shot in the ninth that proved to be the winner as Los Angeles rallied to beat Chicago, snapping a four-game losing streak.

On the first pitch in the ninth, Upton hit his 12th homer of the season, off closer Alex Colomé (4-3), to give the Angels the lead.

Angels reliever Hansel Robles pitched a perfect final two innings for the win and improved to 5-0.

Luis Rengifo led off the third with his seventh homer of the season for the Angels.

The White Sox have lost nine of 11.

Tim Anderson, who was 2 for 4, is bidding to become the first White Sox player to win the AL batting title since Frank Thomas in 1997. Anderson increased his average to .333.

Nick Ahmed led off the third inning with his career-high 18th homer off Tyler Mahle (2-11). The Diamondbacks then took control with five runs in the fifth inning.

The victory extends Houston's winning streak over the Mariners to nine games and improves the Astros to 14-1 against them this season.

Reddick put the Astros on top with a solo home run in the fourth inning. Bregman had an RBI double in Houston's three-run first and stole home in the fifth to pad the lead.

Joe Smith (1-0) struck out one in a scoreless sixth for the win and Roberto Osuna pitched a perfect ninth for his 32nd save.

Tom Murphy had two RBIs and Daniel Vogelbach hit his 30th homer as the Mariners dropped their fourth in a row.

It was a matchup of the worst teams in the NL West.

Melville (2-1) allowed two runs and five hits. He frustrated the Padres for the most part, except in the third when Eric Hosmer hit a two-run single to pull San Diego to 3-2. That hit brought in Greg Garcia, aboard on a leadoff walk, and Nick Martini, who had doubled.

Jairo Diaz pitched a perfect ninth for his first big league save.

The Giants ended a stretch in which they lost eight of 10 and 12 of 16 on a night when retiring manager Bruce Bochy was honored by the Dodgers in a pre-game ceremony.

Samardzija (10-11) allowed three runs and five hits while striking out three and walking none.

Kershaw exited after four innings in his shortest start of the season. He gave up three runs and seven hits — second-most of the season — struck out six and walked three.