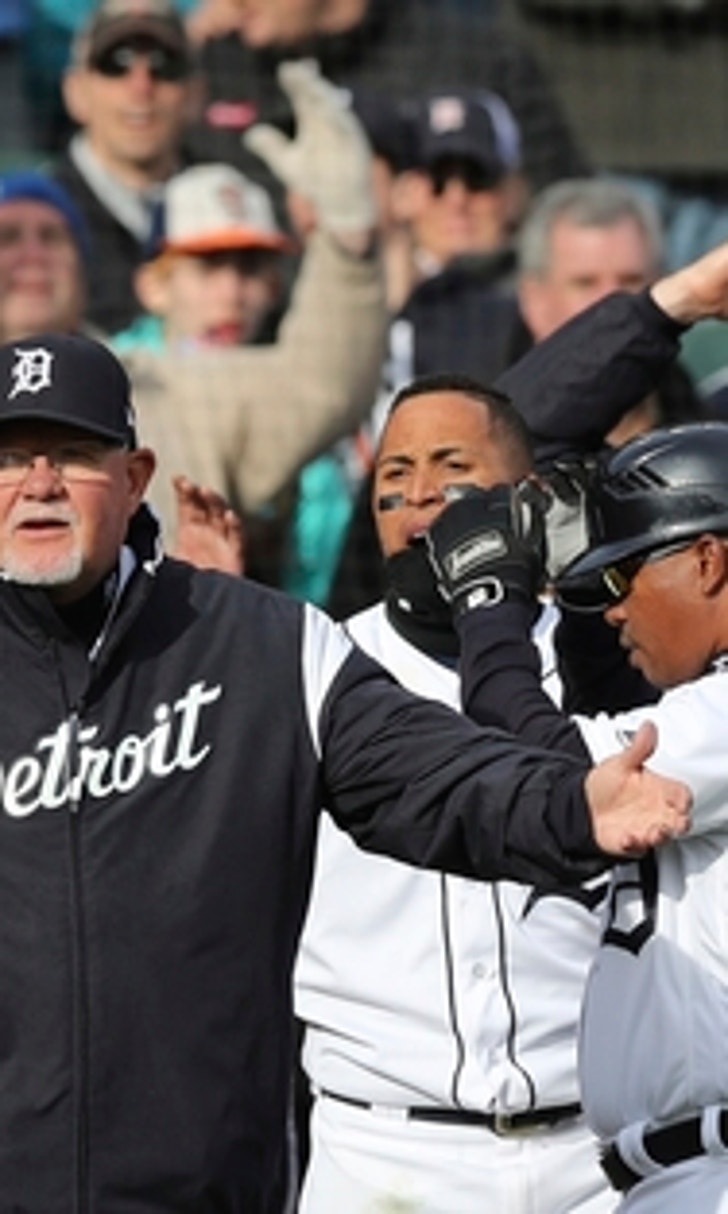 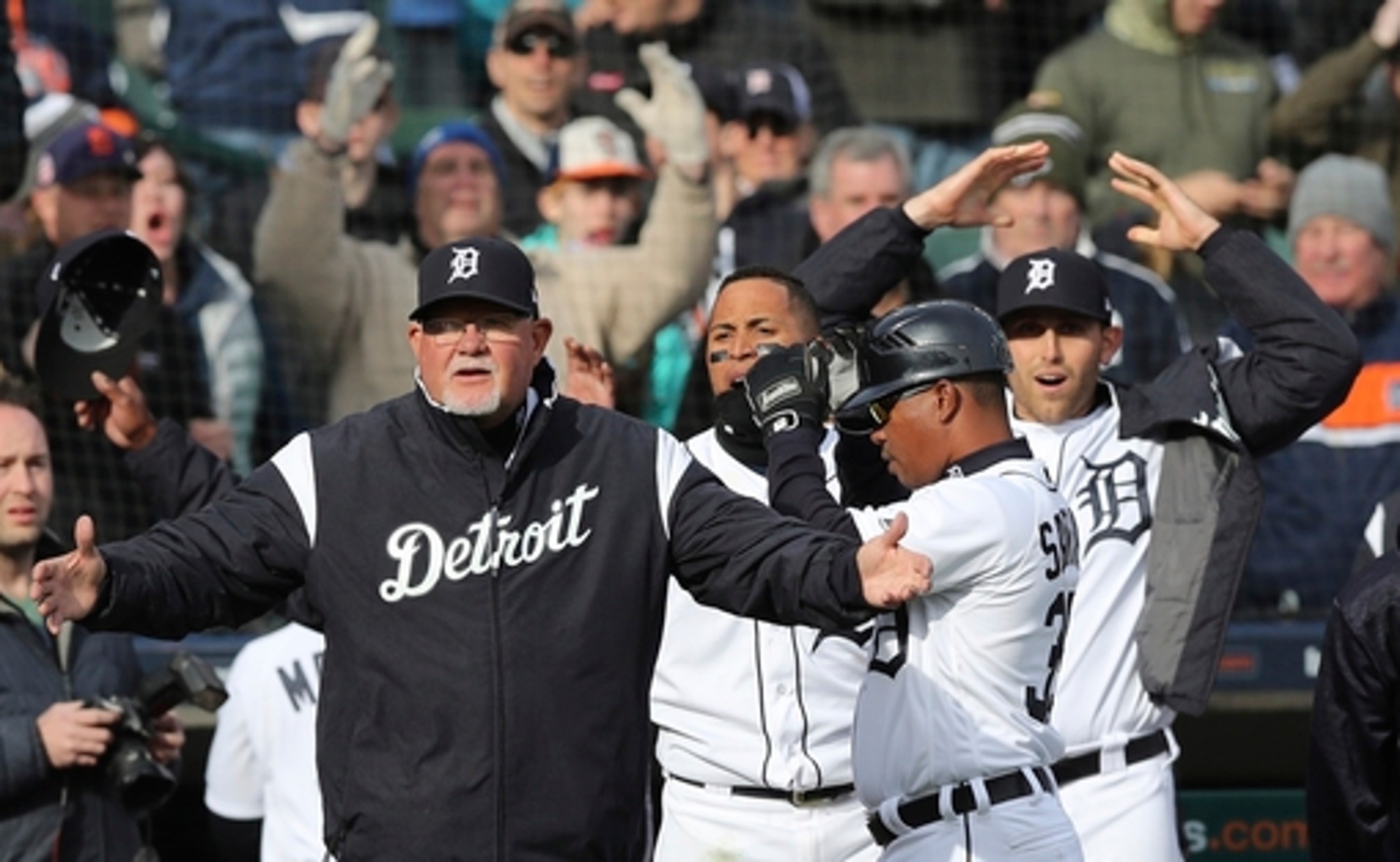 DETROIT (AP) Gregory Polanco hit a three-run homer in the 13th inning to lift the Pittsburgh Pirates to a 13-10 victory over Detroit on Friday - about an hour after the Tigers spilled onto the field to celebrate what they thought was a game-winning hit of their own.

Nicholas Castellanos was initially called safe at home in the bottom of the 10th for the Tigers, but a replay review took the run away and the teams played on. Polanco's drive to right-center on a 3-0 pitch from Alex Wilson (0-1) finally gave the Pirates a comfortable lead - or as comfortable as could be on a wacky day in which both teams scored four runs in the ninth.

Detroit put two men on base in the 13th, but Steven Brault (1-0) was able to hold on and finish his third scoreless inning of relief.

By the time the 5-hour, 27-minute game was over, there were only three umpires and one manager left. Plate umpire Mike Everitt exited in the eighth with a concussion after being hit in the mask by a pitch. And Ron Gardenhire - in his first game as Tigers manager - was ejected after the overturned call in the 10th.

MIAMI (AP) - Miguel Rojas drove in Brian Anderson with a single to center in the 17th inning, and Miami topped Chicago.

It was the second career game-ending RBI for Rojas, who did it once last year with a sacrifice fly. This one will go into Marlins lore, not only for its 5-hour, 18-minute length - but moreso because it's the first win of Derek Jeter's era as Miami's CEO.

It took a two-out rally to get it done. Anderson singled to left, and Cameron Maybin followed with a base hit that bounced off shortstop Javier Baez's glove and chased Eddie Butler (0-1) after seven innings and 90 pitches of relief.

Brandon Morrow came in to face Rojas, and two pitches later it was over.

Odrisamer Despaigne (1-0) was supposed to pitch for the Marlins on Saturday as their starter in the third game of the series, not at 12:14 a.m. as Miami's seventh reliever. But he worked a perfect 17th, capping a night where the Marlins' bullpen (and technically one member of their rotation) allowed four hits and struck out 12 in 11 2/3 scoreless innings.

The Giants won by an identical score in Thursday's season opener on Panik's solo shot off Clayton Kershaw.

This time, Panik went deep to the right field pavilion leading off the ninth against Jansen (0-1), making Giants skipper Bruce Bochy the first visiting manager ever to amass 100 wins at Dodger Stadium.

San Francisco's Johnny Cueto retired the first 18 batters he faced before Chris Taylor singled to lead off the seventh.

Hunter Strickland, filling in for injured closer Mark Melancon, earned his second save.

Tyler Skaggs (1-0) pitched 6 1/3 innings of three-hit ball in his first win over the A's in six career starts.

It was Los Angeles manager Mike Scioscia's 1,571st win, tying him with Hall of Famer and former A's and Angels manager Dick Williams for 21st all-time.

Parker allowed Jonathan Lucroy's RBI single before he got Matt Joyce to ground out to second for the save.

Trout homered off Sean Manaea (0-1) in the first. He also reached on a fielder's choice in the ninth and scored from first when left fielder Joyce short-hopped Justin Upton's single and the ball rolled to the fence.

The Brewers trailed 6-3 before jumping all over Hand (0-1) for two runs on three hits, a grounder and his throwing error.

Braun came up with runners on the corners and hit a no-doubter to left on an 0-2 pitch for his first homer this season.

Oliver Drake (1-0) pitched one inning for the win and Corey Knebel struck out the side in the ninth for his first save.

PHOENIX (AP) - Nick Ahmed had a career-best five RBIs and the Diamondbacks regrouped after blowing a five-run lead.

Ahmed hit a three-run homer in Arizona's five-run first inning and an RBI single in the third. He added another run-scoring single off reliever Antonio Senzatela (0-1) in the fifth, giving the Diamondbacks an 8-7 lead after the Rockies had tied it with a five-run fourth.

Charlie Blackmon, Ian Desmond and Gerardo Parra homered for Colorado, which lost 8-2 in its opener on Thursday night.

The five-time All-Star, slowed by injury much of 2017, struck out five and walked none in his first start for the defending AL East champions since last July, when he went on the disabled list with left elbow inflammation.

Rafael Devers snapped a scoreless tie with a single up the middle that drove in Xander Bogaerts, who doubled off Chaz Roe (0-1) leading off the seventh inning to extend his hitting streak to 11 games.

Matt Barnes pitched a scoreless eighth for the Red Sox, who won for the first time under manager Alex Cora. Craig Kimbrel struck out the side in the ninth to finish the combined four-hitter.

CINCINNATI (AP) - Max Scherzer struck out 10 in six innings and Washington, in its first game with Dave Martinez as a major league manager, beat Cincinnati to begin defense of its NL East title.

Nationals star Bryce Harper got two hits, but his string of five straight opening days with a home run came to an end.

A day after this opener at Great American Ball Park was postponed because of rain, Scherzer (1-0) picked up where he left off. The winner of the last two NL Cy Young Awards gave up five hits, walked one and permitted just one runner past first base.

Brandon Kintzler and Ryan Madson each turned in an scoreless inning before Sean Doolittle pitched the ninth for the save.

Homer Bailey (0-1), making his first opening day start in his 10th season with the Reds, allowed four hits and one run with three walks and three strikeouts in six innings.

Giancarlo Stanton, who homered twice and doubled a day earlier in the opener, went 0 for 4. So did big hitters Aaron Judge and Gary Sanchez. Yet the Yankees, under new manager Aaron Boone, improved to 2-0 for the first time since 2011.

Tanaka (1-0) allowed one run on three hits in six innings, striking out eight without a walk. He retired his final 13 batters and is now 10-4 with a 2.86 ERA in 16 career starts against the Blue Jays.

ATLANTA (AP) - Carlos Santana drove in J.P. Crawford with a sacrifice fly in the 11th inning, and first-year Philadelphia manager Gabe Kapler went through nine pitchers for his first win as the Phillies beat Atlanta.

Crawford hit a one-out single up the middle off Shane Carle (0-1) and moved to third on a single by Cesar Hernandez, who had two hits and two walks. Santana, who hit his first homer with the Phillies in the fifth, drove in Crawford with a fly ball to left field.

Drew Hutchinson (1-0) closed it out when he got Ender Inciarte to hit a shallow fly ball to center field with runners on first and second.

Kapler, who was criticized for pulling Aaron Nola with a 5-0 lead after Nola threw only 68 pitches in the Braves' 8-5 win on Thursday night, used eight relievers after Nick Pivetta lasted only four innings.

The right-hander who pitched for the Astros in 2016, the year before they won their first World Series, allowed only Max Stassi's RBI double in the fifth in his new home ballpark, where he had an 8.73 ERA coming in.

Four relievers held the Astros to one hit over the final four innings, capped by Keone Kela pitching around a walk in the ninth.