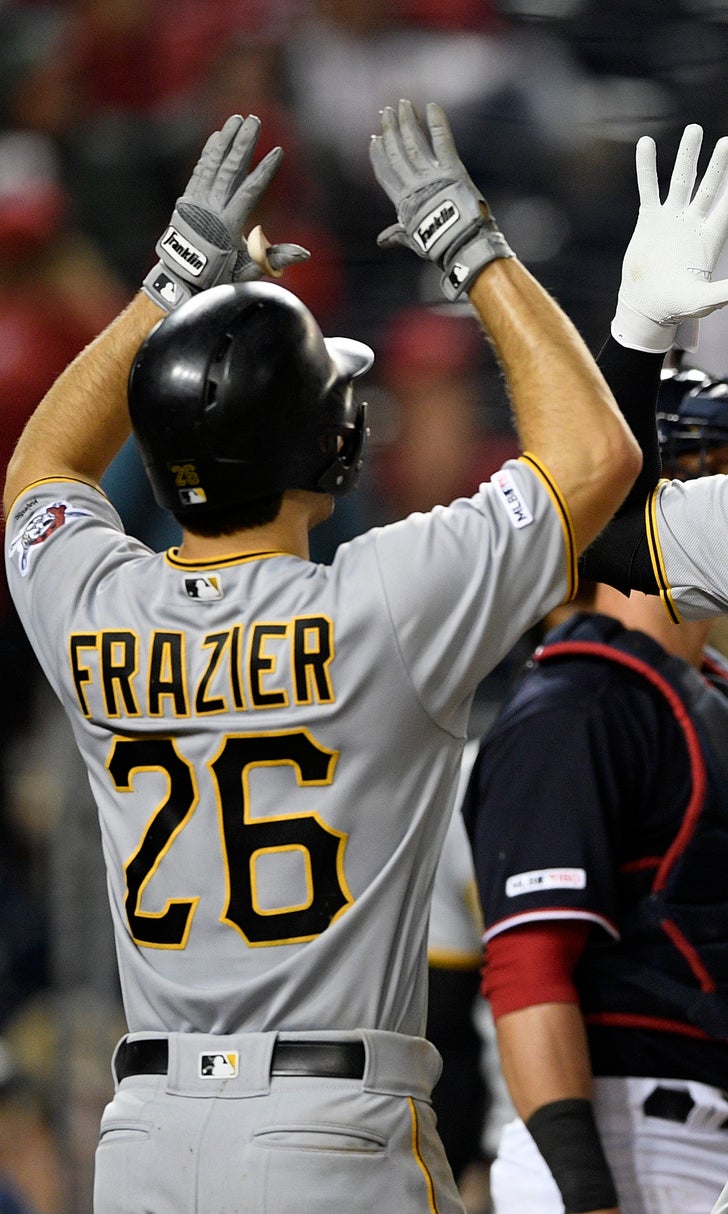 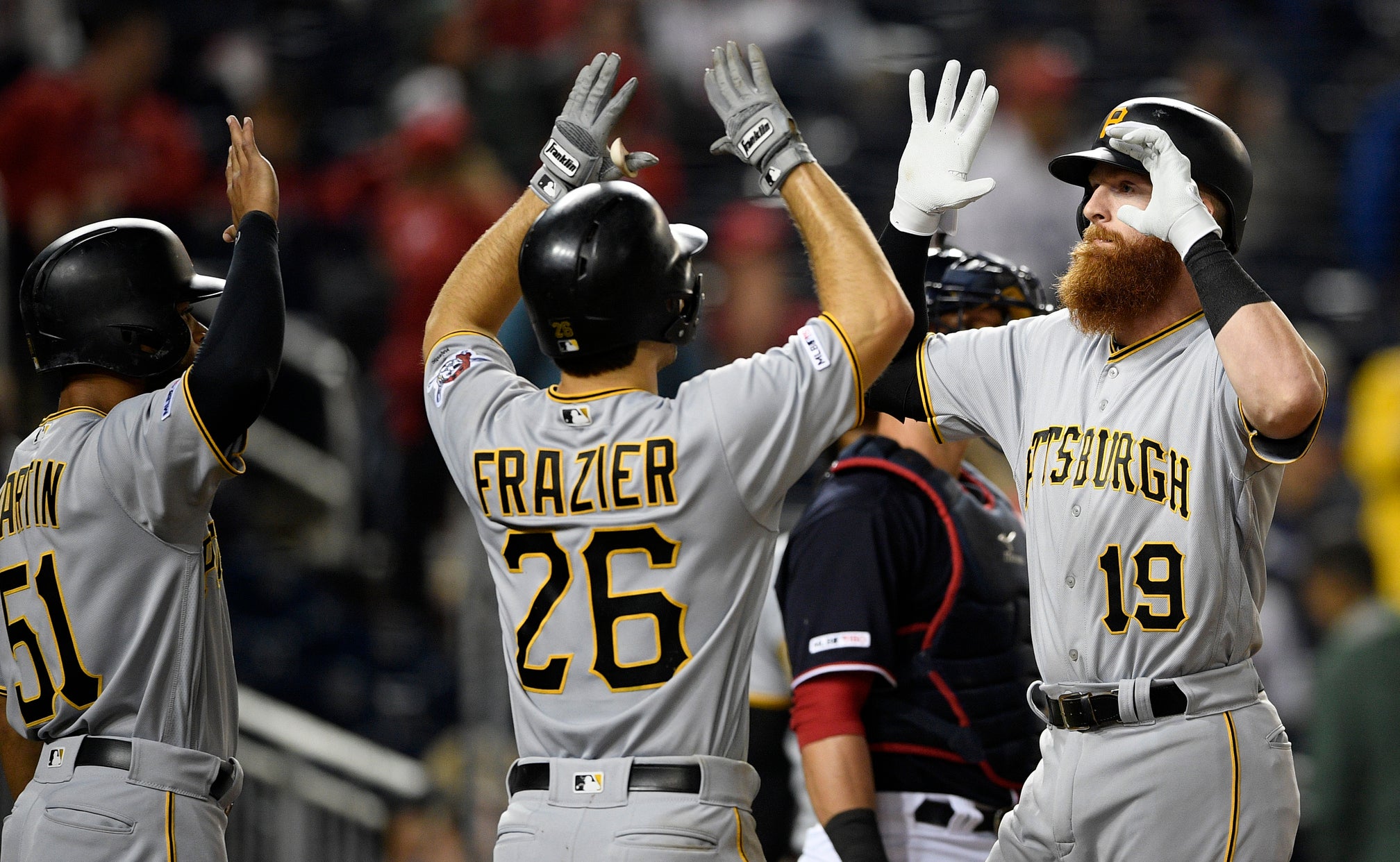 WASHINGTON (AP) — Colin Moran has less than a full season's worth of at-bats in the majors, and just maybe the 26-year-old is becoming one of the game's better pinch hitters.

Moran came off the bench in the 10th inning Friday night and hit a three-run homer, part of five runs Pittsburgh scored off Washington's struggling bullpen, in a 6-3 victory over the Nationals.

Moran's blast to right center off Justin Miller was his second as a pinch hitter in 34 at-bats. His 11 hits in that role tied him for fourth-most in the majors last season. Over his career, he has posted a 1.093 OPS in pinch hitting situations.

"I think maybe I just do a good job of keeping things simple, but I don't know," said Moran, who batted for Jung Ho Kang, after Melky Cabrera and Adam Frazier reached base against lefty Matt Grace (0-1). "You just try and get your A-swing off and see what happens early."

Pittsburgh snapped a four-game losing streak in Washington and spoiled a two-homer night for the Nationals' Anthony Rendon.

Despite a relatively clean performance during a three-game sweep at Philadelphia. Washington relievers entered Friday the worst in the majors. Their ERA grew to 8.12 by game's end.

"We've got to get this one thing ironed out," Nationals manager Dave Martinez said.

Starling Marte hit a two-run single off Kyle Barraclough in the top of the eighth inning that gave the Pirates a 3-2 lead, before Rendon's solo shot in the bottom of the inning tied it.

Cabrera's pinch-hit double led off the 10th. There were runners on second and third after Grace's throwing error on Frazier's comebacker and Starling Marte's grounder to the catcher.

Moran came up, with Josh bell — who homered earlier — on deck.

"When you pinch hit you kind of forget who's hitting behind you, and I saw JB and he's swinging a good bat," Moran said. "I had a good feeling I would get some pitches to hit if I could dial into the strike zone."

Nick Burdi (1-1) worked a scoreless ninth for his first big league win, and Felipe Vazquez pitched the 10th for his fourth save.

Rendon has six homers after going deep twice for the fifth time in his career. He extended his hitting streak to 11 games and has recorded at least one extra-base hit in the last nine games. In terms of extra-base hits, it's tied for the longest such streak since the club moved to Washington. Ryan Zimmerman had extra-base hits in nine straight games in 2017.

Patrick Corbin struck out 11 and allowed one run in seven innings in his third start since signing a six-year, $140 million contract with Washington in December. He has yet to earn a decision despite lowering his ERA to 2.84.

"We want to win, obviously," said Corbin. "I think as a starter, if you just keep us in the game, do your job out there, more times than not we're going to come away with wins."

Pirates: OF Gregory Polanco (left shoulder) and RHP Dovydas Neverauskas (left oblique strain) will have their rehabilitation assignments transferred to Triple-A Indianapolis on Saturday. Neverauskas threw two scoreless innings at Class A Bradenton, while Polanco was 2 for 13 there with four walks and an RBI in four games.

Nationals: RHP Max Scherzer (sore right leg) had his next start pushed back a day, to Sunday, because of lingering soreness after he was hit with a line drive in last Sunday at the Mets. ... With Miller's fastball velocity only in the low 90s, Martinez worried the reliever might be hurt. "I'm going to find out," Martinez said. "I don't know what's going on. I'm going to talk to him."

Pirates: RHP Chris Archer (1-0, 2.45 ERA) makes his first start against Washington since 2015. He has a 2.45 ERA in two career appearances against the Nationals.

Dodgers Bounce Back Thanks To Buehler
L.A. reclaimed the momentum in Game 3 vs. the Rays, while Randy Arozarena's last-chance homer mattered more than you think.
8 hours ago

Best Of Game 3 Watch Party
Justin Verlander stopped by to talk Game 3 with the squad, plus the real story behind Verlander's $1 million breakfast.
11 hours ago

World Series Top Plays: Game 3
From Walker Buehler's lights-out night to the Dodgers' mashing at the plate, check out the best moments from Game 3.
12 hours ago

World Series Enters Pivotal Stage
Drama. Redemption. A sudden shift in momentum. Martin Rogers breaks down the series with Nick Swisher as it heads to Game 3.
15 hours ago