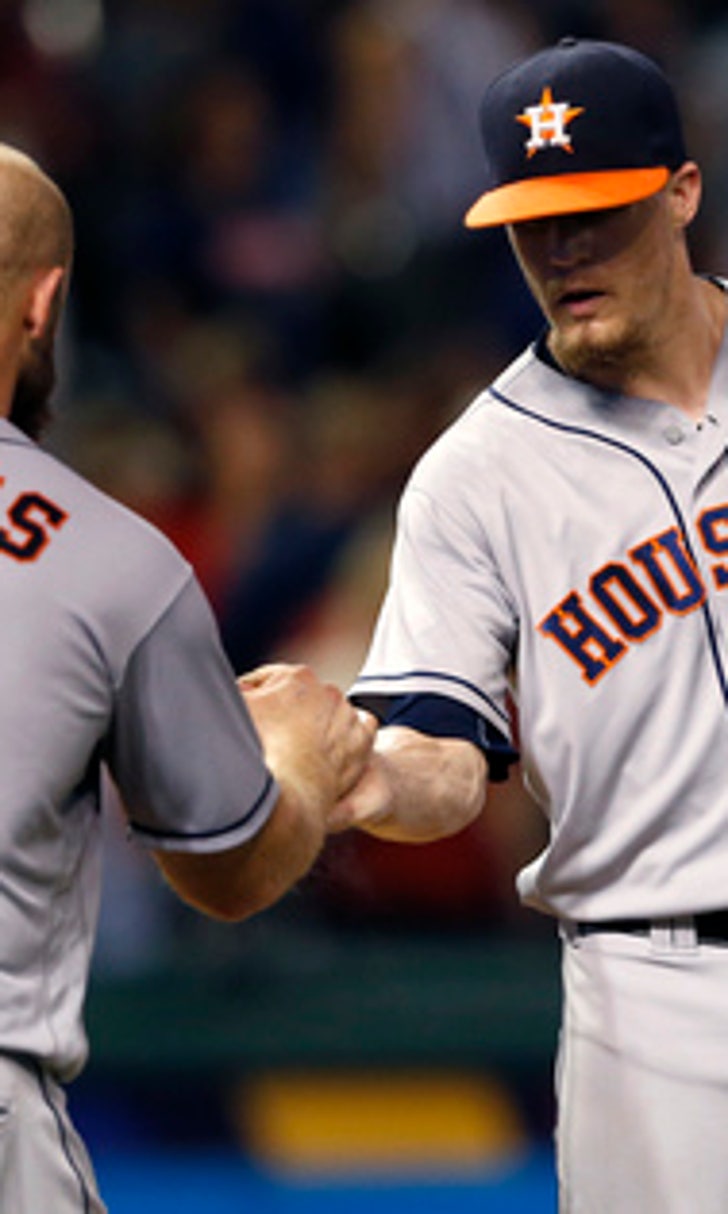 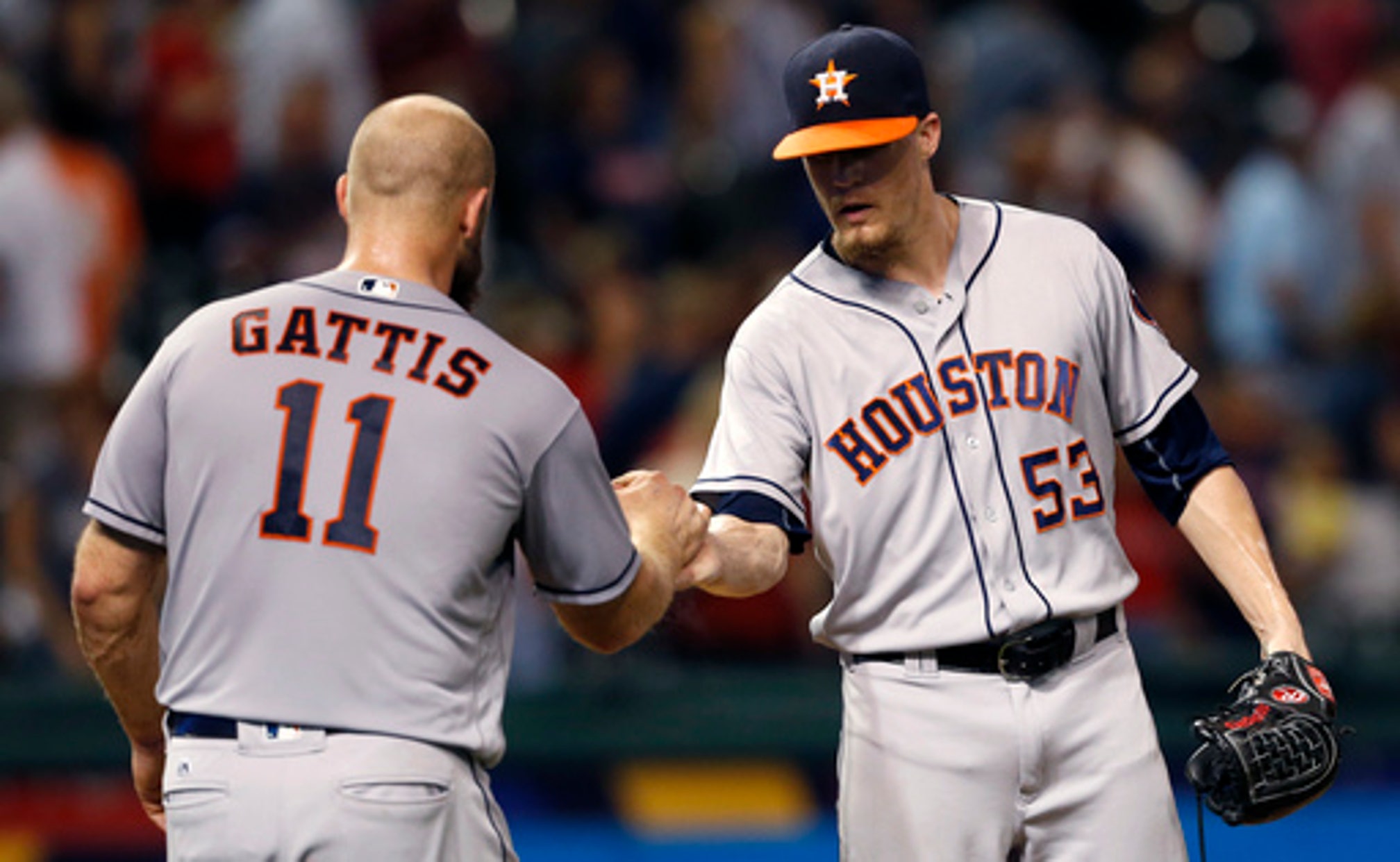 Kluber loses for first time since July, Astros down Indians 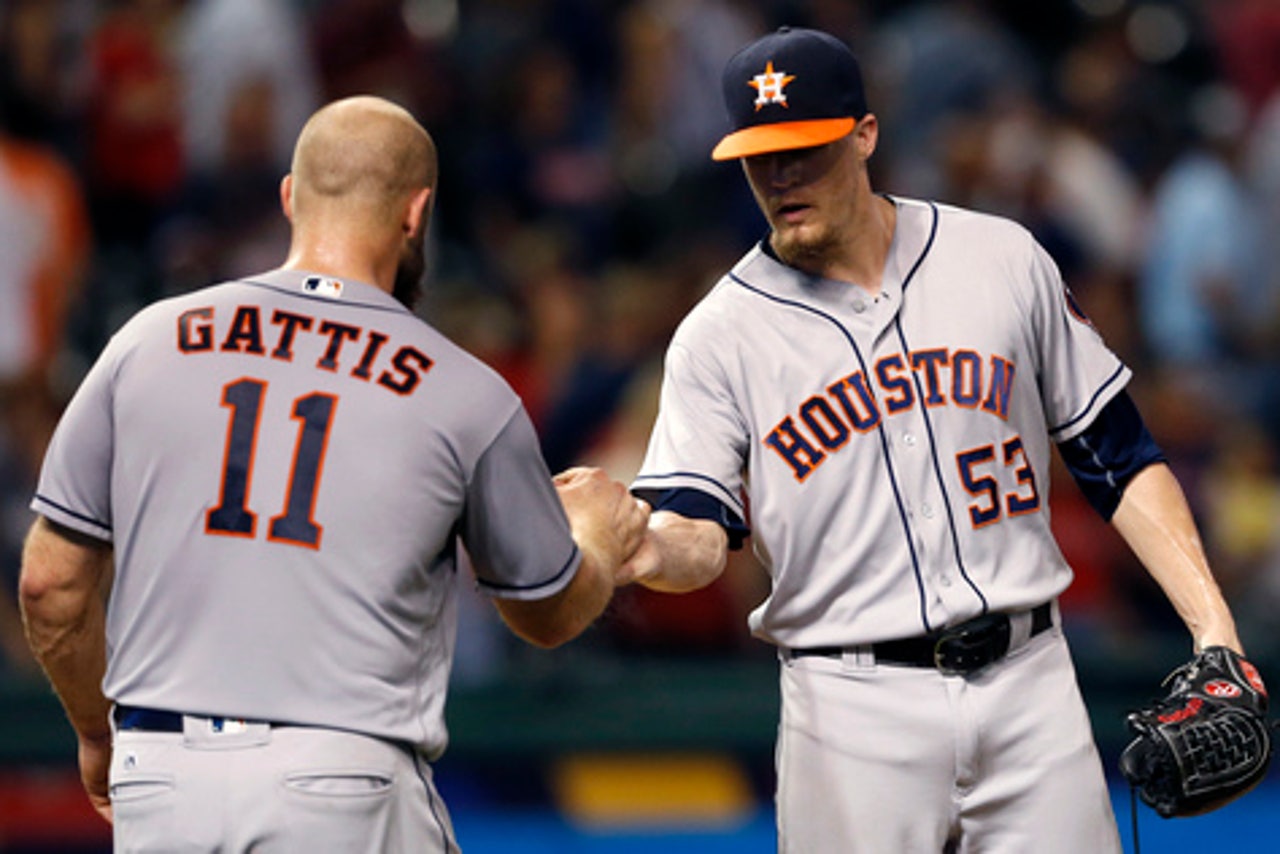 Marwin Gonzalez hit a hanging curveball from Kluber for a three-run homer in the second inning and the Houston Astros handed Cleveland's ace his first loss since July 3, 4-3 on Tuesday night.

Kluber (15-9) had won his previous seven decisions, a span during which he dominated the way he did while winning the AL Cy Young Award in 2014. But the right-hander had a bad string of six batters against the Astros, who have won the first two of four games between the playoff contenders.

After a pair of uncharacteristic two-out walks in the second, Kluber got ahead of Gonzalez 0-2 before leaving a belt-high curve over the middle of the plate that the first baseman drilled into the right-field seats.

And it was enough to send the AL Central-leading Indians, who maintained their 4 1/2-game lead over Detroit , just their second loss in eight games.

Reliever James Hoyt (1-0) struck out two in 1 1/3 innings for his first major league win. The 29-year-old rookie replaced Brad Peacock, who was called up to replace injured Dallas Keuchel and made his first start since April 14, 2015.

Carlos Santana homered in the eighth off Luke Gregerson to pull Cleveland within 4-2. The Indians scored an unearned run in the ninth and got the tying run to second before Ken Giles, Houston's fifth reliever, recorded his ninth save.

The Indians have led their division for 95 consecutive days and Kluber has been a big reason why. The unflappable 30-year-old had not lost in over two months, and whenever his team needed a big outing, Kluber delivered. He was 7-0 with a 1.94 ERA in 11 starts since losing to Toronto in July - before the All-Star break.

''It wasn't his best performance,'' manager Terry Francona said, ''but yet if not for a hanging 0-2 pitch he would have given up one (run). He's pretty good.''

After getting two outs, Kluber walked Evan Gattis and Colby Rasmus before quickly getting ahead of Gonzalez. Kluber tried to sneak his curveball past Gonzalez, but he was ready for it.

''I was just trying to put the ball in play against one of the best pitchers in the game, but I put a good swing on it,'' Gonzalez said.

The Indians, who couldn't score on Peacock in the first despite opening with a single and double, got a run back in the second on Tyler Naquin's RBI groundout.

But that missed opportunity haunted them.

''Obviously that was a big turn of events,'' Francona said. ''We have second and third and nobody out, don't score and then they come back with three. That's a big turnaround.''

Houston went ahead 4-1 in the third on Alex Bregman's RBI triple off Kluber, who settled in and retired 15 of 17 before leaving after seven. He finished with nine strikeouts.

An injury to Keuchel prevented the game from being a matchup of former Cy Young winners. The left-hander was sent back to Houston with shoulder inflammation, a significant setback to the club's wild-card chances.

The Indians are still trying to decide what to do with Josh Tomlin. The right-hander, who is 0-5 with an 11.47 ERA in his last six outings, had his start skipped Monday.

Tomlin said he's willing to do whatever the Indians need.

Indians: C Yan Gomes (separated shoulder) is scheduled to be catching minor league games on his rehab assignment this weekend. Gomes, who has been on the disabled list since July 18, threw to bases Tuesday and will DH on Wednesday for Triple-A Columbus. He is eligible to be activated on Sept 16.

Astros: RHP Doug Fister looks to bounce back after being tagged for seven runs and 10 hits in 3 2/3 innings against Texas on Sept. 2.

Indians: RHP Carlos Carrasco, who struck out 11 and pitched 7 1/3 shutout innings in his last outing, starts for the fifth time in his career against Houston. Carrasco is 2-1 with a 2.05 ERA against the Astros.