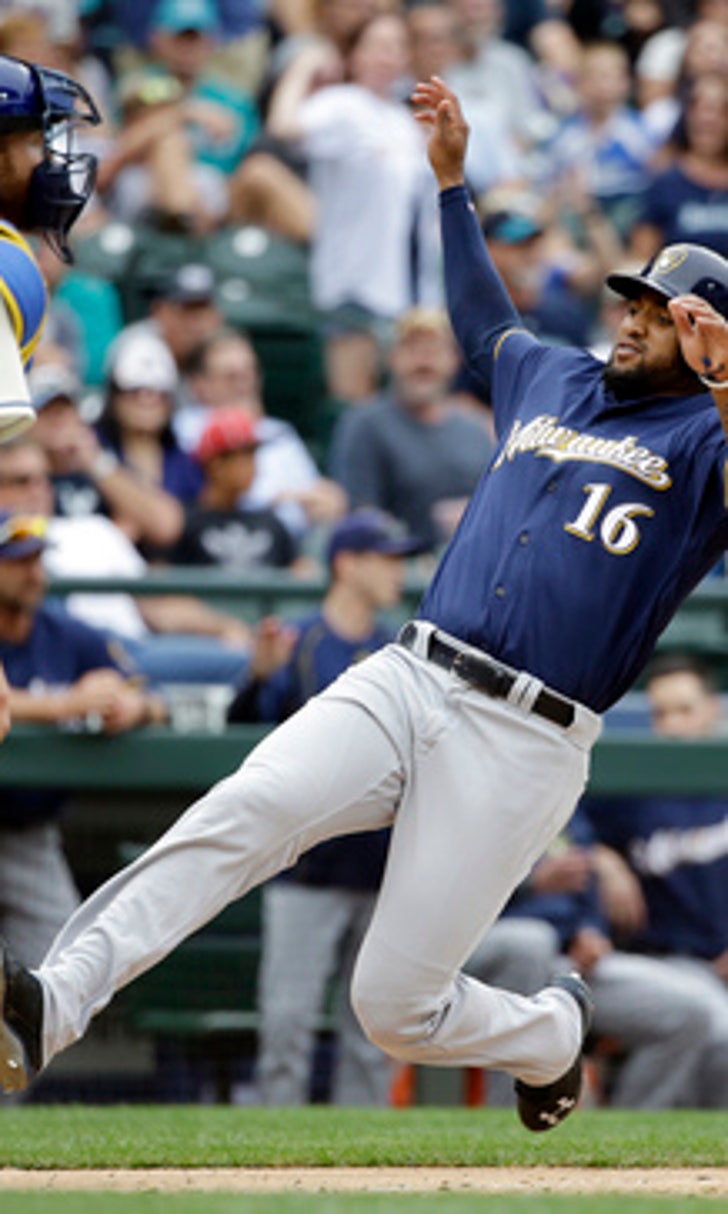 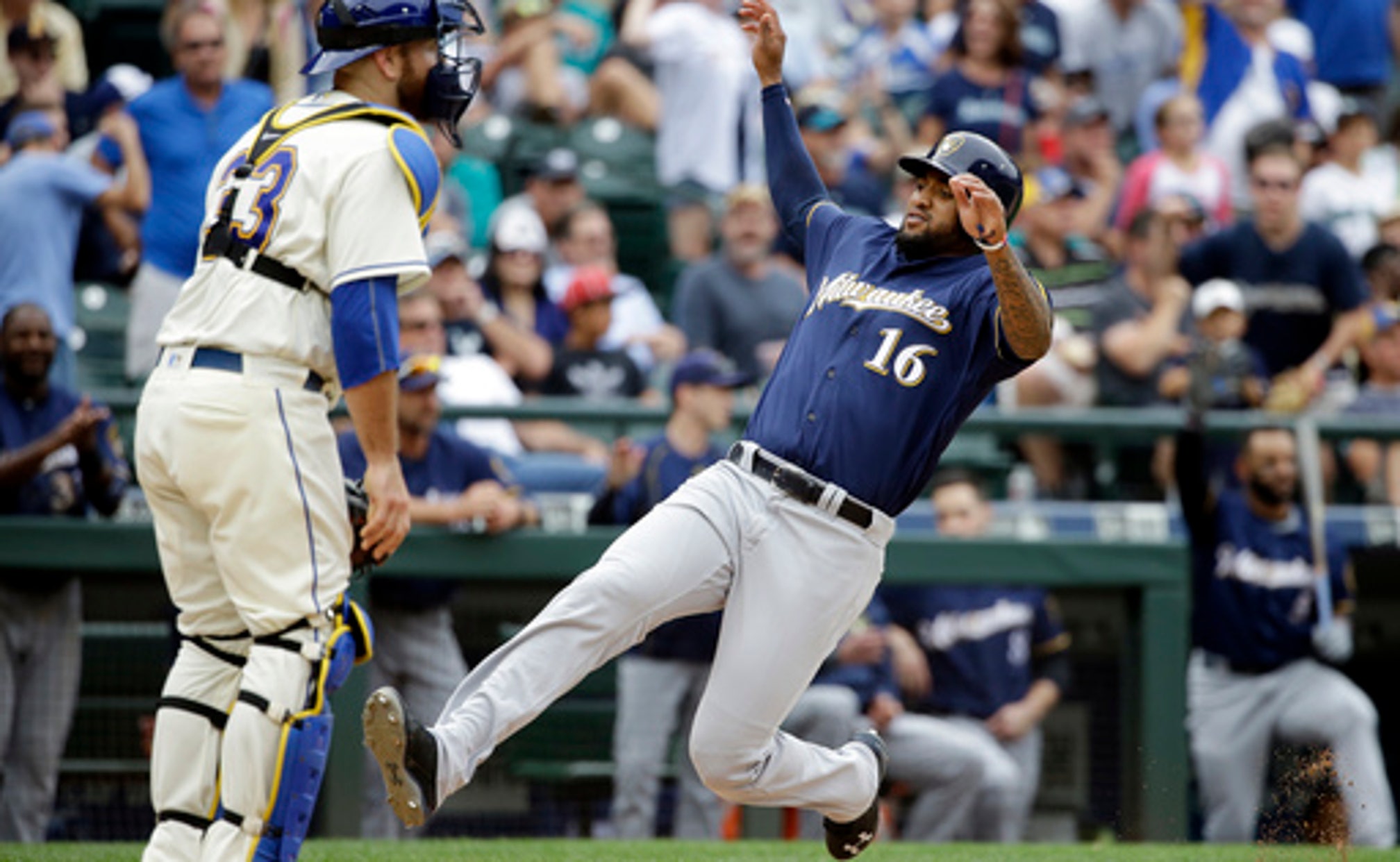 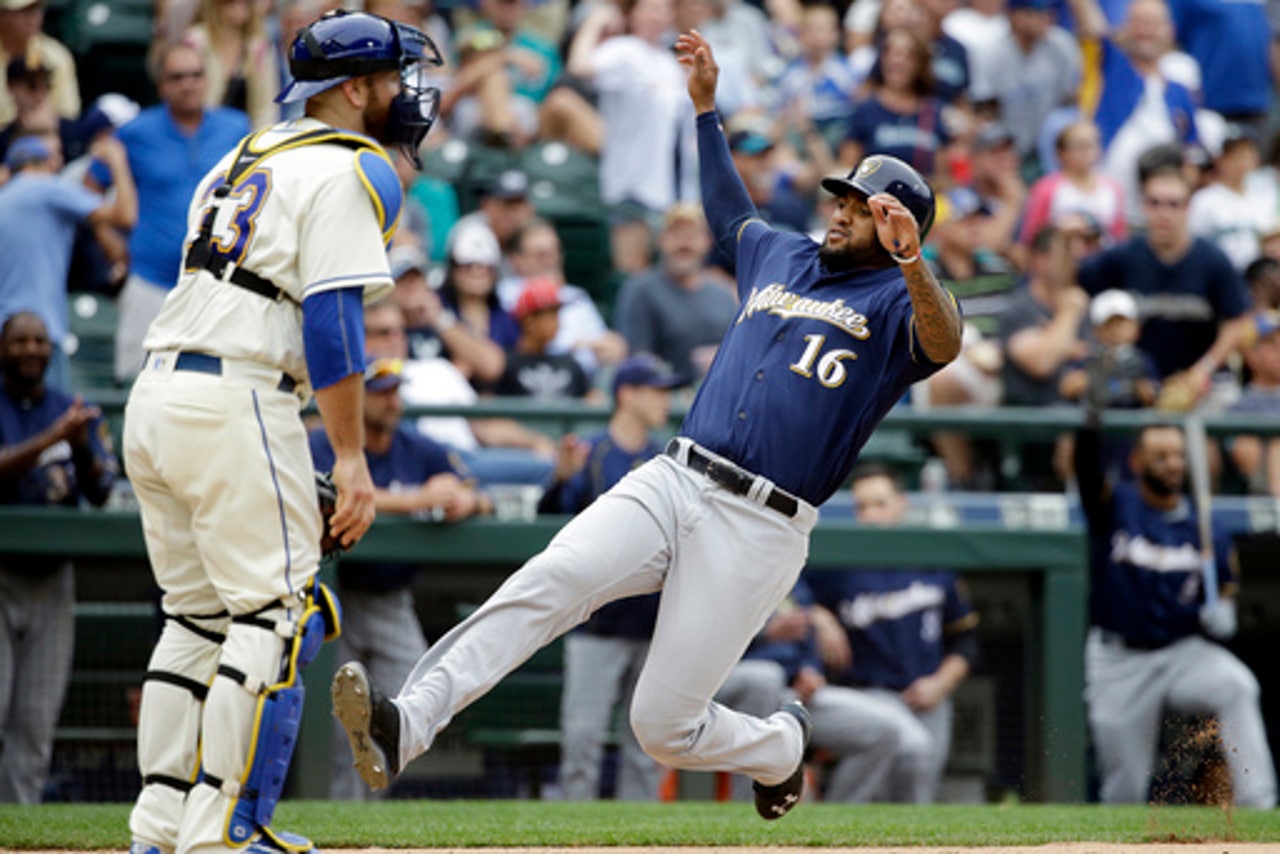 Keon Broxton and Chris Carter homered and Scooter Gennett had an RBI single during a four-run ninth, lifting the Brewers over the Seattle Mariners 7-6 on Sunday to end a six-game losing streak.

''That's a really good one. A really good birthday present for sure,'' said Brewers manager Craig Counsell, celebrating his 46th birthday. ''We talked about it earlier in the series, we've been giving ourselves some chances late in these games, and it hasn't worked out. Today it kind of all came together.''

The Brewers never even got a lead during the first six games of this road trip and trailed 6-3 after eight innings Sunday but rallied against Tom Wilhelmsen (2-4). Broxton hit his second solo homer of the game and Carter followed with a two-run shot, his 29th, to tie it.

It appeared right fielder Shawn O'Malley may have made a leaping grab of Carter's drive at the wall in right-center.

After Domingo Santana singled, Vidal Nuno relieved Wilhelmsen and allowed a single to Manny Pina. Gennett then blooped a single into left-center that scored Santana from second.

Manager Scott Servais chose not to use closer Edwin Diaz after he threw 34 pitches in an outing Friday.

''I thought we were in a good spot,'' Servais said. ''Tom Wilhelmsen has given us everything he's got this year, it just wasn't his day. You've got to give them credit, they didn't quit.''

Tyler Thornburg (5-4) pitched the final two innings for the win.

''Every day is a new day and this is a good win,'' Counsell said. ''When you're struggling, and wins seem really tough and you find a way to win a game through some heroics and great performances, you celebrate it for sure.''

The Brewers, whose 20-41 road record is worst in the majors, trailed 6-1 after four innings. Ryan Braun had a two-run double in the sixth off rookie Ariel Miranda, making his third career start since being acquired from Baltimore for Wade Miley on July 31.

The Mariners, who had won eight straight at home, scored three in the third and three in the fourth off Matt Garza (4-6), who was tagged for six runs, five earned, and nine hits in 3 2/3 innings.

In the third, Leonys Martin opened with a ground-rule double and Ketel Marte lined an RBI single that just eluded diving shortstop Orlando Arcia. Marte advanced when Garza failed to handle Norichika Aoki's chopper to the mound for an error.

Seth Smith followed with an RBI single to right to make it 2-0, and Robinson Cano added an RBI groundout.

Broxton cut the lead to 3-1 with his fifth home run, a one-out shot in the fourth for the Brewers first hit.

Seattle manufactured three more station-to-station runs in the bottom half on a bases-loaded single by Smith, another RBI groundout by Cano and a run-scoring infield single by Nelson Cruz.

BROXTON STAYS HOT: Since being recalled from Triple-A Colorado Springs on July 25, Broxton is hitting .361 with five homers, five doubles, a triple and 13 RBIs, along with 14 walks and 10 stolen bases.

Mariners: After a solid rehab start on Saturday at Triple-A Tacoma, LHP James Paxton (left elbow contusion) is expected to rejoin the Mariners rotation and likely to start Thursday at the Chicago White Sox. ... RHP Taijuan Walker, sent to Triple-A Tacoma on Aug. 8 after going 4-7 with a 4.10 ERA in 17 starts for Seattle, could start for Seattle on Tuesday.

Mariners: RHP Cody Martin (1-2, 3.14 ERA) will make his second spot start against the Yankees on Monday.

Scenes From LA's Celebration
The Los Angeles Dodgers are crowned World Series champions for the first time in 32 years, and the emotions were on full display.
7 hours ago

Best Of Game 6 Watch Party
Nick Swisher, Tino Martinez, Rick Ankiel and Ben Verlander react to Blake Snell being pulled and the Dodgers' title win.
8 hours ago
those were the latest stories
Want to see more?
View All Stories
Fox Sports™ and © 2020 Fox Media LLC and Fox Sports Interactive Media, LLC. All rights reserved. Use of this website (including any and all parts and components) constitutes your acceptance of these Terms of Use and Updated Privacy Policy. Advertising Choices. Do Not Sell my Personal Info