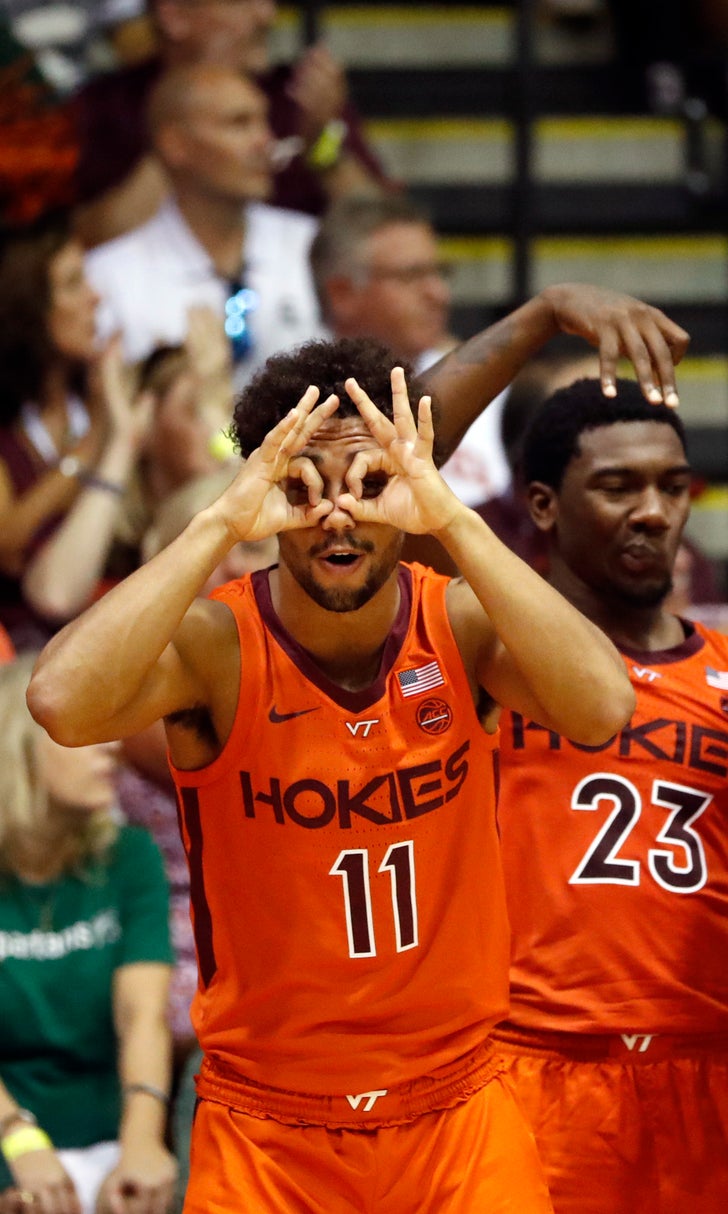 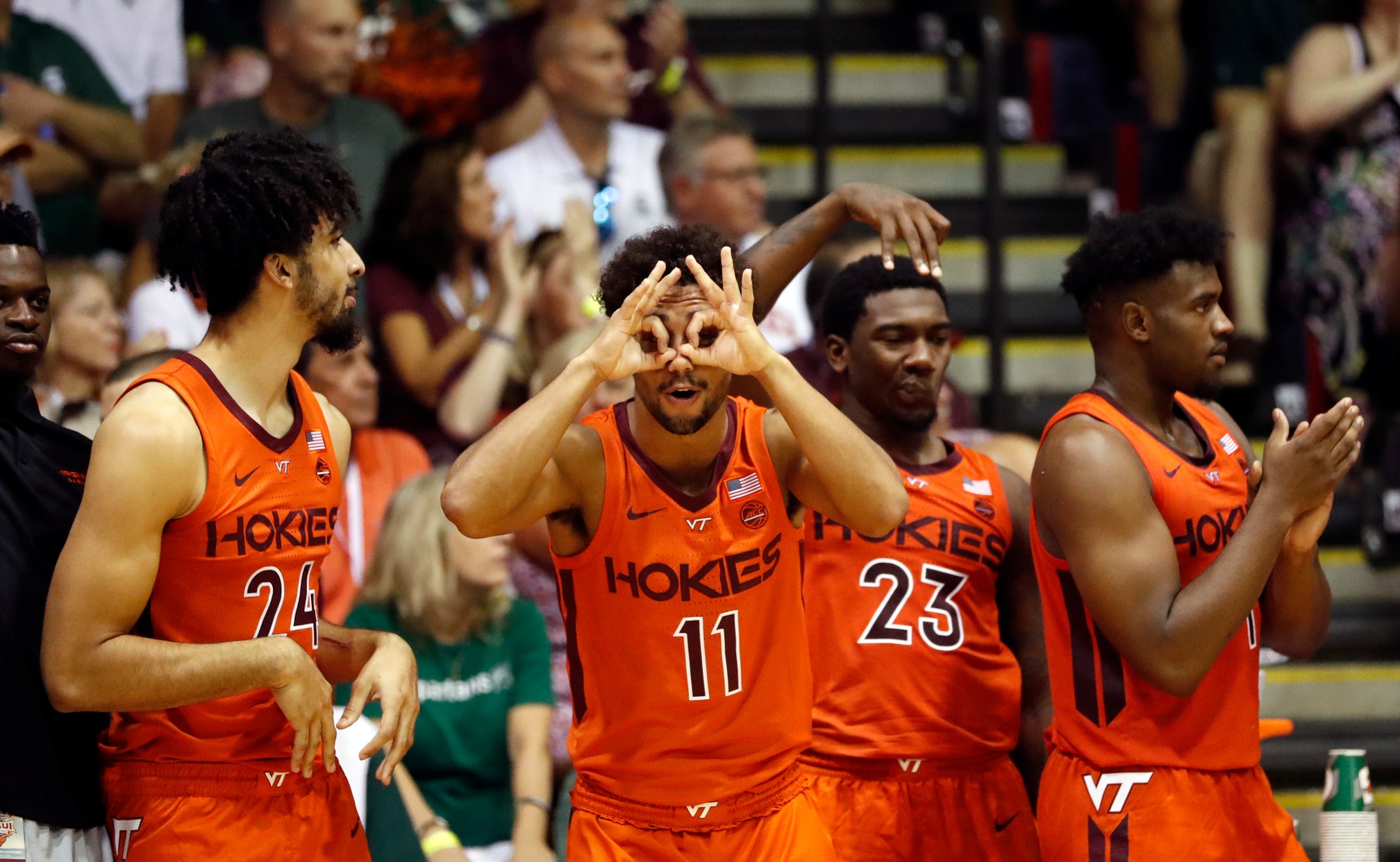 Michigan State and Kansas missed each other in the season-opening Champions Classic.

They won’t be facing each other 5,000 miles away in Hawaii, either.

The third-ranked Spartans and fourth-ranked Jayhawks were on opposite sides of the bracket in the Maui Invitational, setting the stage for a tantalizing matchup between college hoops heavyweights. But after their loss to Kentucky in New York, the Spartans were dealt another defeat by unbeaten Virginia Tech on Monday, relegating coach Tom Izzo’s squad to the loser side of the bracket.

“I've said this for 20 years: ‘Upsets happen.’ And that's no insult to them, but it is an upset,” Izzo said. “I thought they played harder than us and better than us.”

The Jayhawks, who lost their season-opener to top-ranked Duke in New York, got a relatively easy opener in Maui by playing Division II host Chaminade. But even after the loss by Michigan State, there is no easy path to the tournament title in a field that includes Georgia, Dayton, BYU and UCLA.

Not to mention the Hokies, who already scored an ACC win over Clemson this season.

“That's what we look for as coaches,” Young said, “and if you do that, you're going to give yourself a chance to win every game. And we have done that through six.”

The Maui Invitational is hardly the only holiday tournament worth tuning into this week. This is a look at some of the other events featuring some of the best teams in the country:

The showdown in the Bahamas could be the crème de la crème of holiday tournaments with four ranked teams among the eight landing in Nassau for the opening round Wednesday.

Michigan and Iowa State get things going, followed by No. 6 North Carolina against Alabama and No. 8 Gonzaga against Southern Miss. The last opening-round matchup pits No. 11 Oregon against No. 13 Seton Hall, meaning one of those teams could need to down three top 15 teams en route to the title.

“We're a Final Four team. I fully believe that,” North Carolina guard Cole Anthony said. “I don't see any reason why we can't be. It's a long road and we're not there yet, but it's early in the season. That's why we have these games.”

The Tar Heels have a bunch of them coming up, too. After the tournament in the Bahamas, they face No. 10 Ohio State and seventh-ranked Virginia in back-to-back games to start December.

“I think it'll be a good thing to see us go against some big teams,” the Tar Heels’ Garrison Brooks said, “and really see how we measure up against them.”

Fifth-ranked Maryland, which leapfrogged North Carolina in the Top 25 on Monday, is the favorite when the eight-team tournament begins at HP Field House in Orland on Thursday.

No. 18 Auburn already has had several close shaves as it seeks to follow up its Final Four trip of a year ago. But the Tigers were still the headliners in a field that includes Wisconsin, Richmond and New Mexico when the tournament tipped Monday night at the Barclays Center in New York.

No. 12 Texas Tech has reloaded after its Final Four run and will try to carry its hots start to Orleans Arena for its semifinal against Iowa. Creighton and San Diego State also meet Thursday night.

Nico Mannion and No. 14 Arizona take their high-scoring, acrobatic show to Anaheim on Thursday, where the Wildcats are the star attractions in a field that includes Pepperdine, Wake Forest, College of Charleston, Long Beach State, Central Florida and Penn.

No. 17 Tennessee faces Florida State and VCU meets Purdue in the semifinals in Niceville, Florida, on Friday night. The consolation and championship games are Saturday.

No. 21 Colorado rolled past Wyoming on Sunday and into the championship game, where the Buffalos will face Clemson on Tuesday night. The Tigers edged TCU in their semifinal matchup.

Former Big 12 rivals in Oklahoma and Missouri are in the four-team field in Kansas City, and both should bring plenty of fans. Stanford and Butler will no doubt feel like the road teams.

Once the dominant early season tournament, the in-season NIT offers up-and-coming Penn State and Oklahoma State along with Ole Miss and Syracuse at the Barclays Center.

Top-ranked Duke has Stephen F. Austin and Winthrop this week, while No. 2 Louisville plays Western Kentucky in Nashville and No. 16 Memphis faces North Carolina State on a neutral floor in New York.