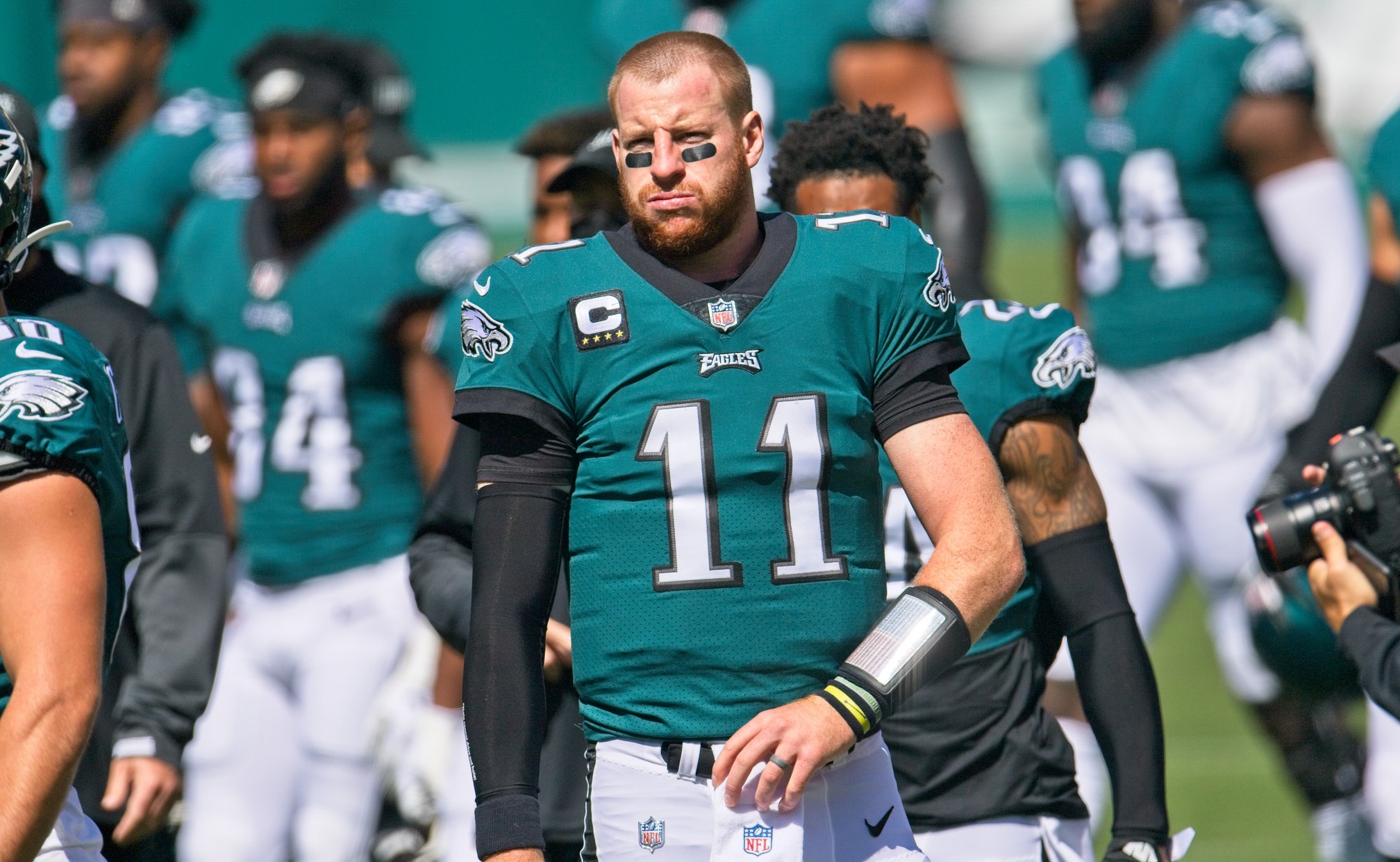 Colin Cowherd has never been shy in voicing his opinions on professionalism in sports.

And just this week, Cowherd took issue with one style choice from one struggling franchise quarterback.

Philadelphia Eagles quarterback Carson Wentz has stumbled out of the gate this season.

The Eagles are 0-2 and Wentz is completing just 58.8 percent of his passes. He has 2 passing touchdowns, 1 rushing TD, 4 interceptions and 2 fumbles.

And on Thursday, things got a little bit worse for Wentz, after Cowherd called him out wearing his hat backwards during a press conference after the Eagles' latest loss.

"You tell me there's not a difference between this look as a franchise quarterback, and this look," said Cowherd, switching his Eagles hat from backwards to front-facing live on FS1's The Herd with Colin Cowherd.

Cowherd's point was that Wentz – the face of the Eagles – was not carrying himself as a franchise quarterback by wearing his hat backwards in a press conference, and on Friday, Colin doubled down, after Twitter began to take swings at him in the form of tweeting photos of other quarterbacks – such as Seattle's Russell Wilson – wearing a hat backwards.

"There's certain things you just wouldn't wear if you were introduced to the Pope or the president. Time, place, location [and] assignment matters ... If you are a quarterback and you have your once-a-week podium discussion ... and you have the Eagles banner behind you with a major corporate sponsor, you're telling me this [backwards hat] is no different than this [front-facing hat]? I think you're wrong."

It was at that point that the internet took over, led by this Cowherd impressionist.

Lids even got in on the action.

As you might notice, Gottlieb made sure to "@" both Cowherd and NFL analyst Bucky Brooks in his tweets, due to the fact that Brooks took to Twitter to defend Cowherd's take regarding Wentz and his headwear choices.

And as the responses kept coming in, Brooks kept standing tall.

'The Great Backwards Hat Debate' will surely rage into the future, or it will at least be reborn next time Colin sees a struggling QB turn his cap in reverse after a loss.

Spitting Image
Sunday night proved that Kyler Murray is chasing Russell Wilson for the title of 'Best Undersized Quarterback' in the NFL.
9 hours ago

Like Fine Wine
Tom Brady's tearing up the NFL at age 43, and the Buccaneers' offense could be getting even scarier in the coming weeks.
10 hours ago
those were the latest stories
Want to see more?
View All Stories
Fox Sports™ and © 2020 Fox Media LLC and Fox Sports Interactive Media, LLC. All rights reserved. Use of this website (including any and all parts and components) constitutes your acceptance of these Terms of Use and Updated Privacy Policy. Advertising Choices. Do Not Sell my Personal Info