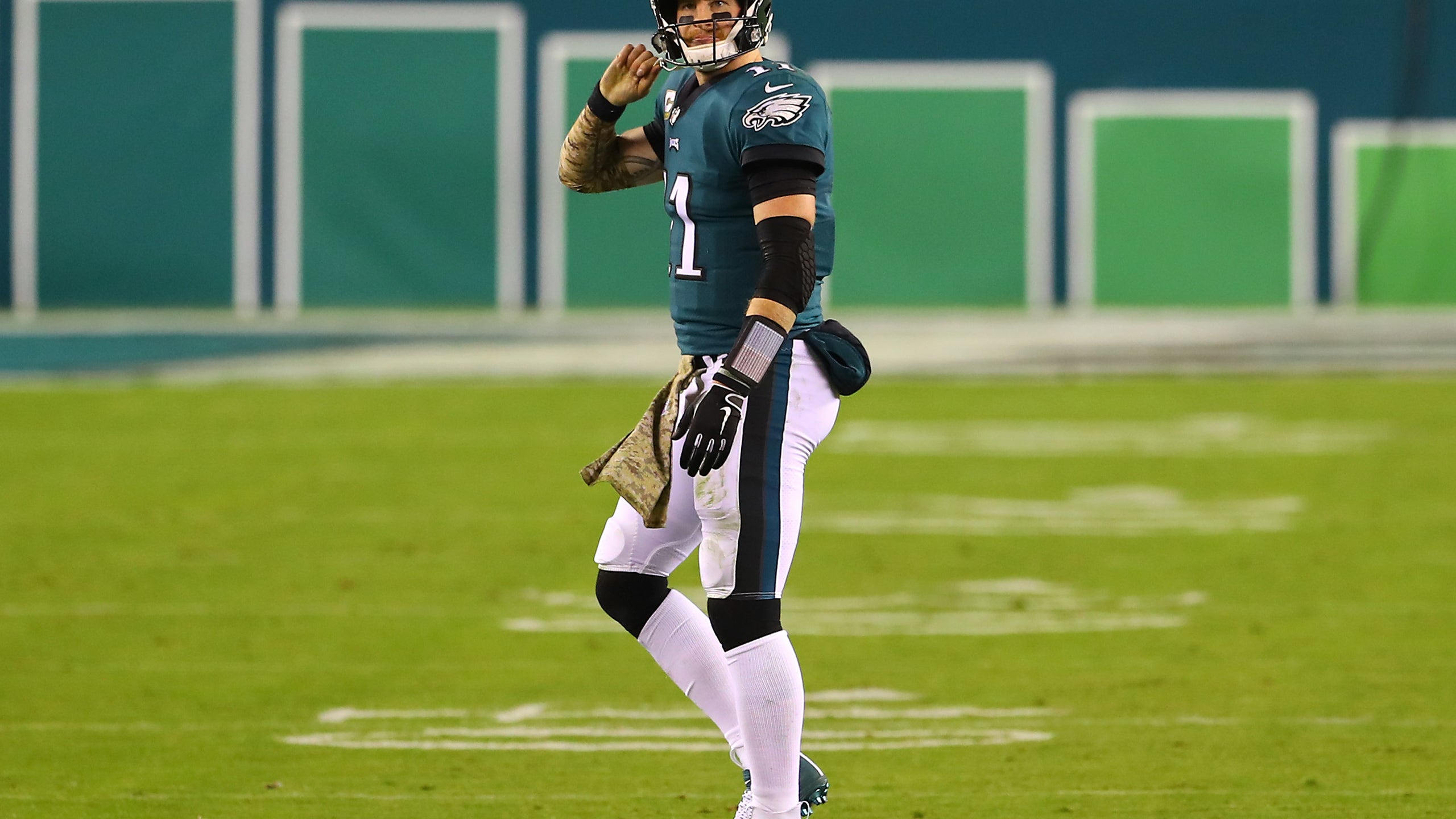 The NFL offseason begins in earnest after the Super Bowl, but there’s already plenty to discuss heading into the 2021 offseason.

We are looking at an offseason of unprecedented quarterback movement. With as many as 15 veteran QBs on the move, plus five projected first-round picks, we might have 20 quarterbacks starting in new places next season, including Deshaun Watson.

Watson wants out of Houston, as the team has repeatedly taken steps to alienate its franchise quarterback. The last straw appears to be the team’s refusal to include Watson in the coaching search, despite assuring him that he’d be part of the process.

That search came to an end on Wednesday, as the Texans hired Baltimore Ravens assistant David Culley.

Whether or not Watson was included in the coaching hire, he's reportedly still unhappy. Yet the Texans told the media on Friday that they have no interest in doing a deal.

For now, we have a stand-off – but you have to imagine that eventually, Watson will win out. And if so, where might he land?

Franchise quarterbacks with the talent and career ceiling of Watson’s rarely become available, and any team attempting to acquire him will need to come strong with a trade package.

The two options, at least publicly, are the New York Jets and the Miami Dolphins. These two teams happen to be the ones with the most draft capital to acquire Watson. Odd how that reporting goes. Nonetheless, let’s discuss these.

Both make sense because they can offer multiple high-round draft picks. The Jets and Dolphins have stockpiled picks to improve their rosters but also have them for this rare case of a QB trade.

The Jets can offer three picks in the top 34 this year, as well as two first-rounders and a second-rounder next season. Plus, they can throw in quarterback Sam Darnold, the fourth pick in the 2017 draft.

However, even with the acquisition of Watson, the Jets would not be talented enough to win right away, and trading all that draft capital for Watson would make building the roster around him a tougher task. Although the Jets should have serious discussions about this trade, I do not believe they can make that deal.

The Dolphins are the best landing spot for Watson, and at +400, they have the odds I’d sprinkle some money on. It’s not a full-unit wager (more on that later), but it’s worth some pizza money. The Dolphins went 10-6 last season because of their coaching, defense and special teams. They are a young offense, with multiple rookies on the offensive line and injuries at wide receiver. Then there's Tua Tagovailoa, whom they drafted fifth overall last season.

If the Dolphins swap Watson for Tua, they would immediately be the favorites to win the AFC East and challenge the Kansas City Chiefs for the AFC Championship. The Dolphins can offer four picks in the top 50, including Nos. 3 and 18, in this year’s draft, as well as their first- and second-rounders next season. That’s six draft picks in the top two rounds, plus Tagovailoa. This trade could be appealing to the Texans if they believe Tua can be a franchise quarterback.

The Dolphins are not a full-unit wager because the Texans should keep Watson. Unlike the NBA — which is a players’ league, and James Harden can just play like garbage until he’s traded — the NFL is an ownership/front-office league. Watson is under contract, and there are penalties if he decides to skip games.

If he does show up to play, unlike Harden, Watson will play to his full abilities, and the Texans will win games with him under center. As such, the Texans have to choose: Do they start over with the Dolphins’ draft picks and Tua, or do they roll the dice with an unhappy Watson?

Meanwhile, Matthew Stafford is leaving the Detroit Lions after years of leading that franchise, and I can’t wait to see him on a winner.

That leaves two options for Stafford, and both are plus-money. The Indianapolis Colts are +250, and the San Francisco 49ers +350 for Stafford’s services. The deciding factor in these teams’ aggressiveness in trying to add Stafford will be how close they believe they are to winning.

The 49ers proved that with at least an average quarterback for a full season, they can reach the Super Bowl. However, their roster isn’t as good as it was in 2019. They are getting older on defense and lost their defensive coordinator to the Jets.

Does adding Stafford at the cost of a first-round pick plus more get them back to the Super Bowl? That’s a tough call, but I think the 49ers would welcome Stafford if given the chance.

I’d put my money on the Colts at +250. The Colts have a roster to win now, as proven this season with Philip Rivers. They should have beaten the Bills in the wild-card round. With the addition of Stafford and the young talent on the roster, they’d immediately be at the top of the list to contend with the Chiefs in the AFC. I’d put Stafford on the Colts.

Darnold is the answer for the 49ers at +1100 (assuming the Jets do not trade him as a package for Watson). Darnold has shown glimpses that he can be elite in the NFL, and while it’s unlikely he will ever be a top-five QB, it’s fair to withhold judgment until we see him away from Adam Gase.

Darnold would be perfect for the 49ers’ offense. He’d fit great within the scheme, throwing to the open receivers Kyle Shanahan generates with his playcalls but also being good enough to improvise plays, something Jimmy Garoppolo did not do well.

Darnold is still young, and the Niners can pay him a modest contract to take over for Garoppolo, just to mitigate a future giant contract. Trading for Darnold would not require a large package of picks, so the Niners could continue to build their roster.

Lastly, if you wanted a super long shot, the Steelers at +1800 is something to peak at.

Carson Wentz is -250 to stay in Philadelphia, and while that juice is too much for me, I think that would be the best bet. The Eagles had to choose after the season: head coach Doug Pederson, who showed that he wasn’t able to get the best out of Wentz anymore, or Wentz. The franchise couldn’t keep them together.

The Eagles dealt a large package of picks for Wentz, then paid him two years ago. The contract had barely started before he was benched last season. His contract now makes him tough to trade, so the Eagles got rid of Doug Pederson to hire a coach I did not know existed before he was hired.

Reports out of Philly are that Wentz is the favorite of general manager Howie Roseman, and Nick Sirianni as head coach seems like a guy Roseman can control. If Roseman has control, Wentz is staying an Eagle.

Rodgers was emotional after the Green Bay Packers’ loss and was noncommittal about his return to the team in 2021. But why the heck would he want to leave? He has been to two straight NFC Championship Games, and his roster should only improve this offseason.

I understand he’s probably still upset the team "wasted" a draft pick on his replacement instead of helping the offense, but Jordan Love is not a threat to start next season.

The Packers have no reason to trade Rodgers. It’s not happening. This is foolish.

Steelers & Big Ben Face Uphill Battle
The Pittsburgh Steelers are stuck in an unenviable spot with what shapes up as a difficult season ahead, Martin Rogers writes.
12 hours ago

Dak Drama
The waiting game continues in Dallas as the Cowboys have yet to negotiate a deal with franchise quarterback Dak Prescott.
23 hours ago
those were the latest stories
Want to see more?
View All Stories
Fox Sports™ and © 2021 Fox Media LLC and Fox Sports Interactive Media, LLC. All rights reserved. Use of this website (including any and all parts and components) constitutes your acceptance of these Terms of Use and Updated Privacy Policy. Advertising Choices. Do Not Sell my Personal Info