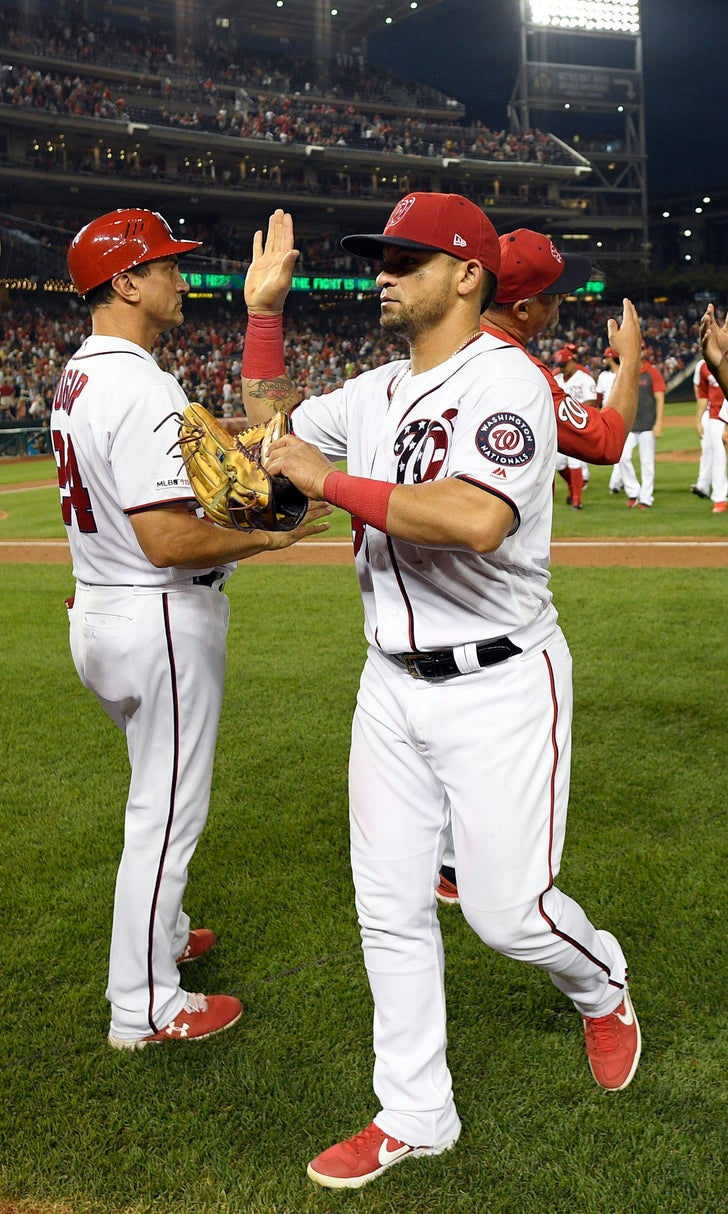 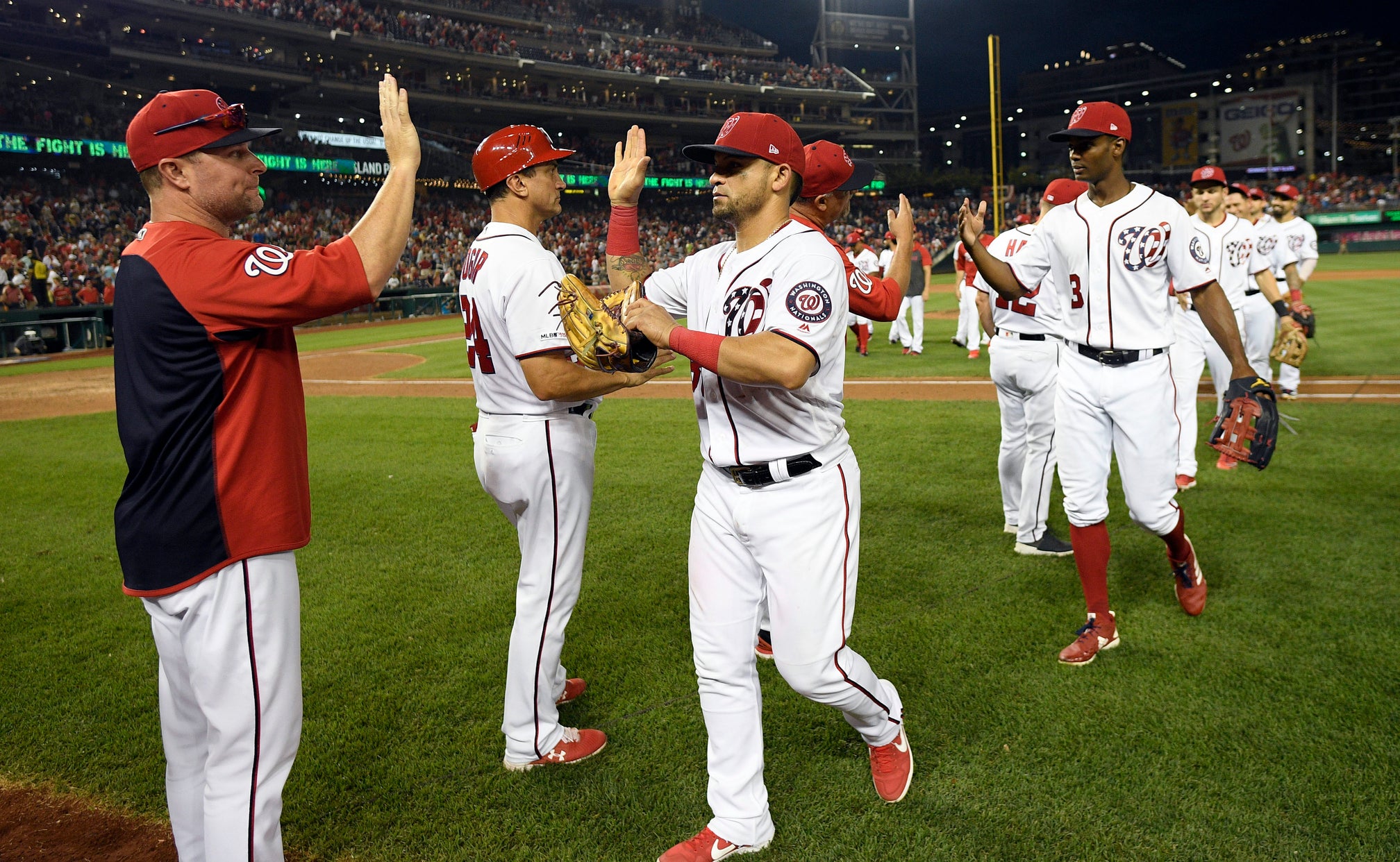 WASHINGTON (AP) — The Washington Nationals assured themselves of hosting the NL wild-card game by holding on to beat the already-eliminated Cleveland Indians 10-7 Saturday with the help of a grand slam in a nine-run second inning from Gerardo Parra.

Nationals Park will be the site of a win-or-go-home game Tuesday night between Washington, which will send three-time Cy Young Award winner Max Scherzer to the mound, and either the St. Louis Cardinals or Milwaukee Brewers. One of those clubs will be the NL Central champion; the other will be the league's second wild-card entry.

Washington starter Patrick Corbin got hit around, giving up six runs in 4 1/3 innings — on three homers. Daniel Hudson (3-0), the fifth of six Washington pitchers, struck out two in a perfect eighth.

Jordan Luplow hit a solo homer, Franmil Reyes had a two-run drive and Eric Haase added a three-run shot for the Indians, who have lost four in a row. Luplow added another drive to left off Sean Doolittle with two outs in the ninth that allowed Cleveland to break the franchise record for homers in a season with 222.

The NL West champions won their sixth straight and tied the win mark of the 1953 "Boys of Summer" team based in Brooklyn that included Jackie Robinson, Duke Snider and other Hall of Famers.

The Dodgers began the day one game behind Houston for the best record in baseball and one game ahead of the Yankees. Los Angeles will begin the Division Series next Thursday at home against the NL wild-card winner.

Ryu (14-5) allowed five hits, struck out seven and didn't walk a batter. He also hit an RBI single. Kenta Maeda pitched the eighth. Kenley Jansen struck out three for his 33rd save.

Max Muncy hit his 35th homer in the sixth off rookie Logan Webb (2-3), who allowed two runs on six hits in six innings, struck out five and walked one.

ST. LOUIS (AP) —St. Louis' push for a division title will go down to the final day of the regular season following a loss to Chicago.

Adam Wainwright (14-10) allowed four homers for the first time in his career, but the Cardinals maintained a one-game lead over Milwaukee for the NL Central lead when the Brewers lost 3-2 in 10 innings at Colorado. If the teams are tied after Sunday's regular season finales, they will play a tiebreaking Game 163 in St. Louis on Monday.

Steve Cishek (4-6) and four other relievers turned a lead over to Brandon Kintzler, who pitched a scoreless ninth for his first save.

DENVER (AP) — Milwaukee closer Josh Hader gave up a tying home run with two outs in the ninth inning and the Brewers lost to Colorado in 10 innings, preventing them from catching St. Louis atop the NL Central.

The Brewers will go into Sunday's regular-season finale one game behind the Cardinals, who lost 8-6 to the Chicago Cubs. If the Cards and Brewers wind up tied, there would be a one-game tiebreaker Monday in St. Louis for the division title.

If the Brewers don't overtake the Cardinals, they will play at Washington on Tuesday night in the NL wild-card game.

With a chance to tie for the division lead, Hader quickly retired the first two batters in the ninth. But rookie Sam Hilliard then stepped up as a pinch-hitter and launched an opposite-field drive to left field that made it 2-all.

Trevor Story led off the Colorado 10th with his 35th home run, connecting against Matt Albers (8-6).

The A's will host the Tampa Bay Rays on Wednesday night. Tampa Bay lost 4-1 at Toronto earlier Saturday. Oakland has won three of its last four games and is 18-7 in September.

Oakland used Anderson (13-9) and three relievers for the victory. Anderson gave up three hits, struck out three and walked one in five innings, extending his career high for wins. Jesus Luzardo struck out three in the eighth and ninth for his second save.

ANAHEIM, Calif. (AP) — Justin Verlander recorded two strikeout milestones, getting his 3,000th in the majors and career-high 300th of the season, and Houston clinched home-field advantage throughout the postseason.

Verlander struck out 12 in six innings while allowing three runs and four hits.

Verlander and teammate Gerrit Cole are the first teammates to record at least 300 strikeouts in the same season since Curt Schilling and Randy Johnson for the Arizona Diamondbacks in 2002. Cole has 316 this year.

Houston rallied with a five-run sixth.

Houston will face either Tampa Bay or Oakland, who play Wednesday night in the AL wild-card game, starting Friday in the Division Series. The Yankees and Minnesota will meet in the other ALDS, which starts the same day.

Matt Duffy homered in the seventh inning for Tampa Bay. Duffy finished with two hits and Tommy Pham singled for the team's other hit.

The Rays (96-65) secured a postseason berth Friday and began the day tied with Oakland in the wild-card race. The A's shut out Seattle 1-0 on Saturday night to clinch home field for the wild-card matchup.

Alonso has already set franchise records for homers, total bases (347) and extra-base hits (85). He has 120 RBIs and 102 runs, becoming the first Mets rookie to reach triple digits in both categories. The home run was his 11th of September.

Steven Matz (11-10) allowed two hits and five walks in six innings, finishing with a winning record for the first time since his first full season in 2016. Jeurys Familia, Brad Brach and Edwin Díaz finished the three-hitter. Diaz struck out two in a perfect ninth for his 26th save in 33 chances.

Mike Foltynewicz (8-6) gave up three runs and three hits in his final start for the NL East champions before the Division Series against St. Louis or Milwaukee.

Arraez collided with first baseman Willians Astudillo while chasing Hunter Dozier's pop fly at the mound. Astudillo caught the ball and Arraez grabbed the back of his right leg as he tumbled to the ground. Arraez had to be carted off the field.

Nelson Cruz hit a tiebreaking homer in the eighth for Minnesota, which has won six in a row and eight of nine overall. Mitch Garver had two doubles and scored twice, and Astudillo had two hits and two RBIs.

Kansas City slugger Jorge Soler went deep twice to move into the AL lead with 47 homers. Soler snapped a tie with the Angels' Mike Trout, who is out with an injury.

BOSTON (AP) — Renato Núñez homered in his second straight game and was one of four Baltimore players to go deep in a win over Boston.

DJ Stewart, Richie Martin and Trey Mancini also homered for Baltimore, which won its 54th game of the season and has a chance to close out a dismal year with a three-game sweep of the defending World Series champion Red Sox.

Xander Bogaerts and J.D. Martinez homered for the Red Sox, who lost their third straight.

Jhoulys Chacín (3-12) lasted just 2 2/3 innings for Boston. He allowed four runs on five hits, struck out three and walked one.

CHICAGO (AP) — Pinch-hitter John Hicks connected for a three-run homer in the ninth inning, and Detroit beat Chicago for a doubleheader split.

Detroit was down 2-1 when Ronny Rodriguez reached on an error on shortstop Tim Anderson leading off the ninth. One out later, Travis Demeritte singled to put runners on the corners.

Hicks, batting for catcher Jake Rogers, then drove a 1-2 pitch from Alex Colomé (4-5) deep to left for his 13th homer.

Buck Farmer (6-6) pitched a scoreless eighth and Joe Jiménez got three outs — giving up a pinch-hit solo homer to Yoán Moncada — for his ninth save.

Anderson, who is looking to become the third White Sox player to win a batting title, went 0 for 2 with two walks after sitting out the opener. He is batting .337.

In the first game, Reynaldo López tossed five-hit ball into the ninth inning to lead Chicago.

Miguel Cabrera homered for Detroit, which has 113 losses on the season, the second-most in franchise history.

López (10-15) allowed one run and five hits with nine strikeouts.

Cesar Hernandez and Maikel Franco also went deep for Philadelphia, which evened its season record against the Marlins at 9-9. The Phillies (81-80) will need to complete a three-game series sweep in Sunday's season finale to clinch their first winning record since going 102-60 in 2011.

Philadelphia tied a club record for homers in a month with 44. Harper has 114 RBIs.

Walker continued a breakout season with his 28th and 29th homers.

The Padres lost for the 14th time in 16 games. They had a 5-1 lead in the seventh inning, but Arizona rallied with five runs, including Walker's grand slam deep into the left-center seats off David Bednar (0-2).

Arizona's Robbie Ray (12-9) gave up four runs over six innings in his career-high 33rd start of the season. He struck out 10. Jimmie Sherfy (1-0) earned the win after giving up one run in one inning of relief.

Kevin Ginkel earned his second save.

ARLINGTON, Texas (AP) — Luis Severino was erratic in his third and final start of the regular season, with four walks and a throwing error over three innings, and the AL East champion New York Yankees lost to Texas.

Rougned Odor had a career-high six RBIs for the Rangers, including his 30th homer that was a grand slam in the sixth to make it 8-1.

Severino (1-1) will go into the playoffs having pitched only 12 innings for the Yankees this season after recovering from a lat injury that had sidelined him since spring training.

The Rangers played the final night game at their ballpark before moving across the street to a new stadium next season. A day game Sunday wraps up the 26th and final season at the stadium that opened in 1994 as The Ballpark in Arlington.

Iglesias' two-out liner to center snapped a 2-2 tie and came after the Pirates turned a double play. The hit scored Kyle Farmer, who led off with a single against Alex McRae (0-4).

Iglesias had three hits and two RBIs for the Reds, and Tucker Barnhart homered. The Pirates were held to five hits by seven pitchers and were shut out over the final 10 innings.