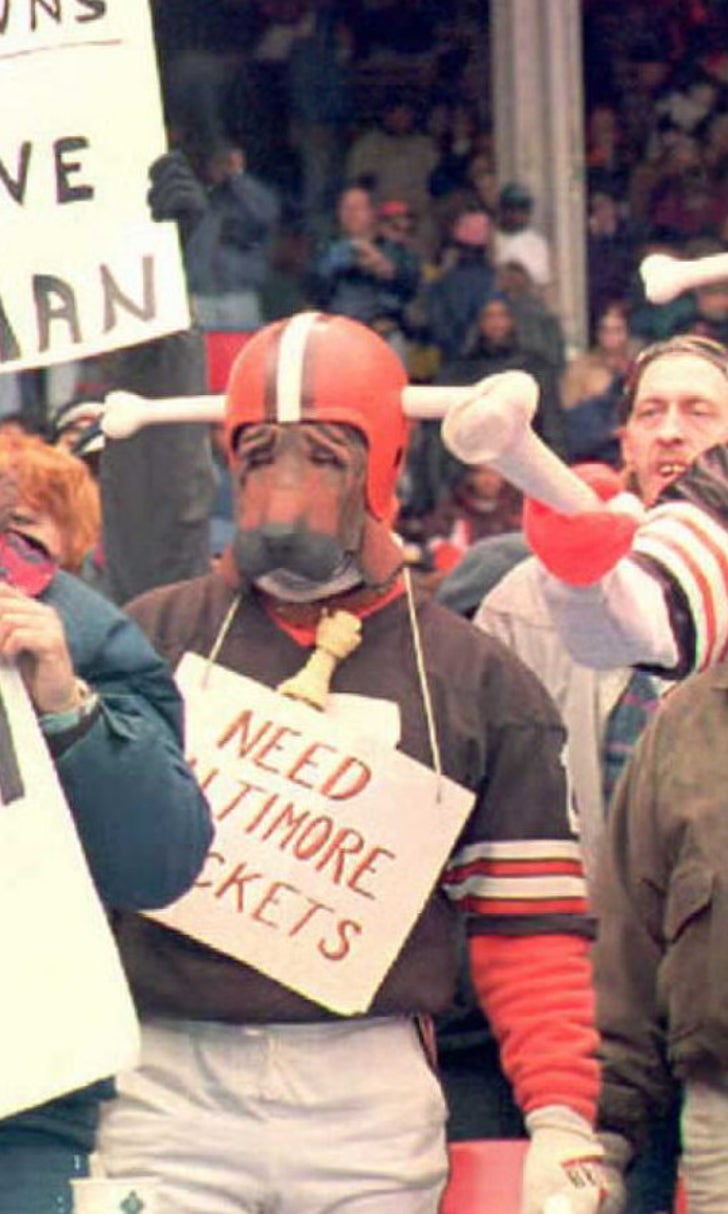 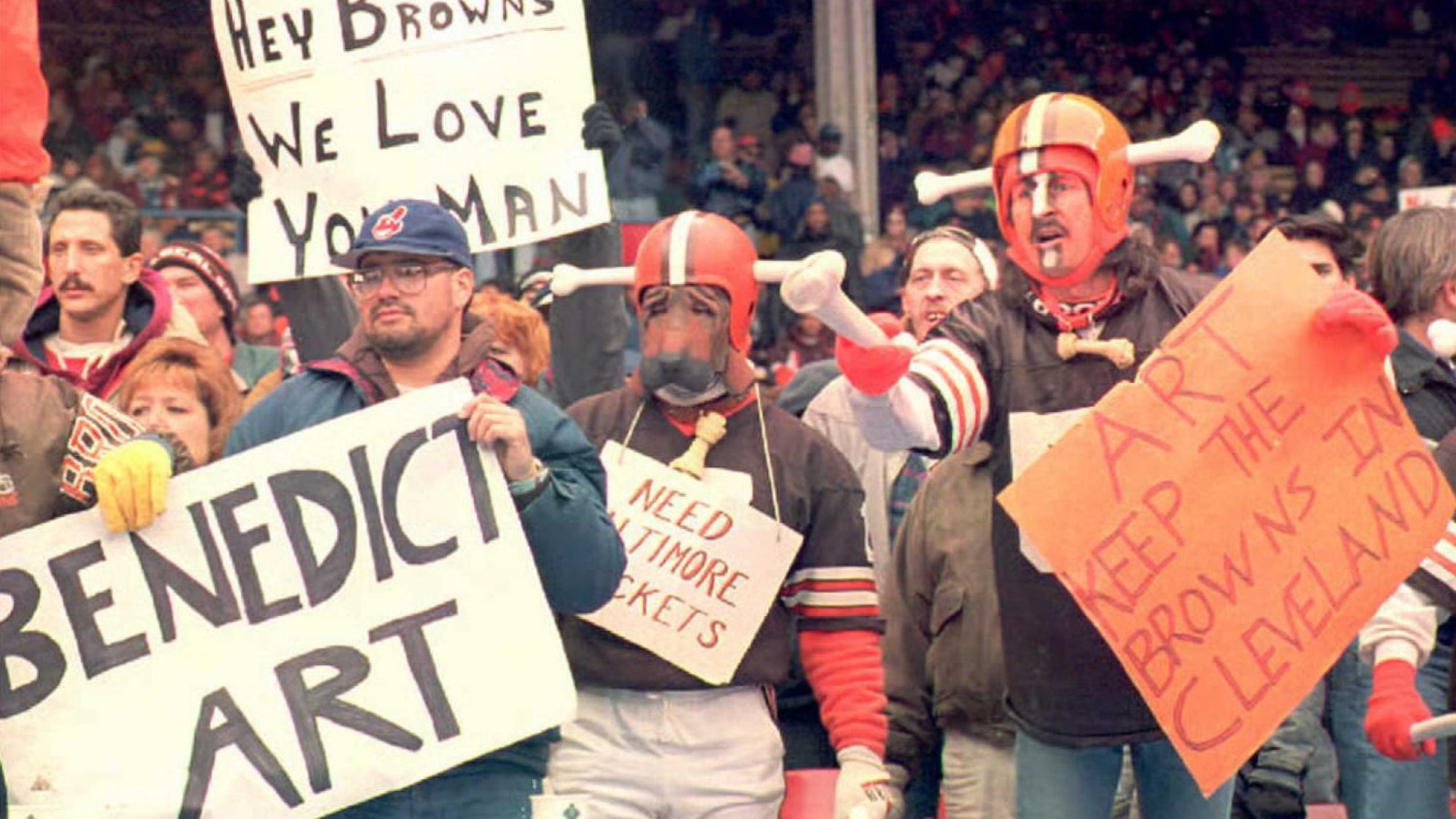 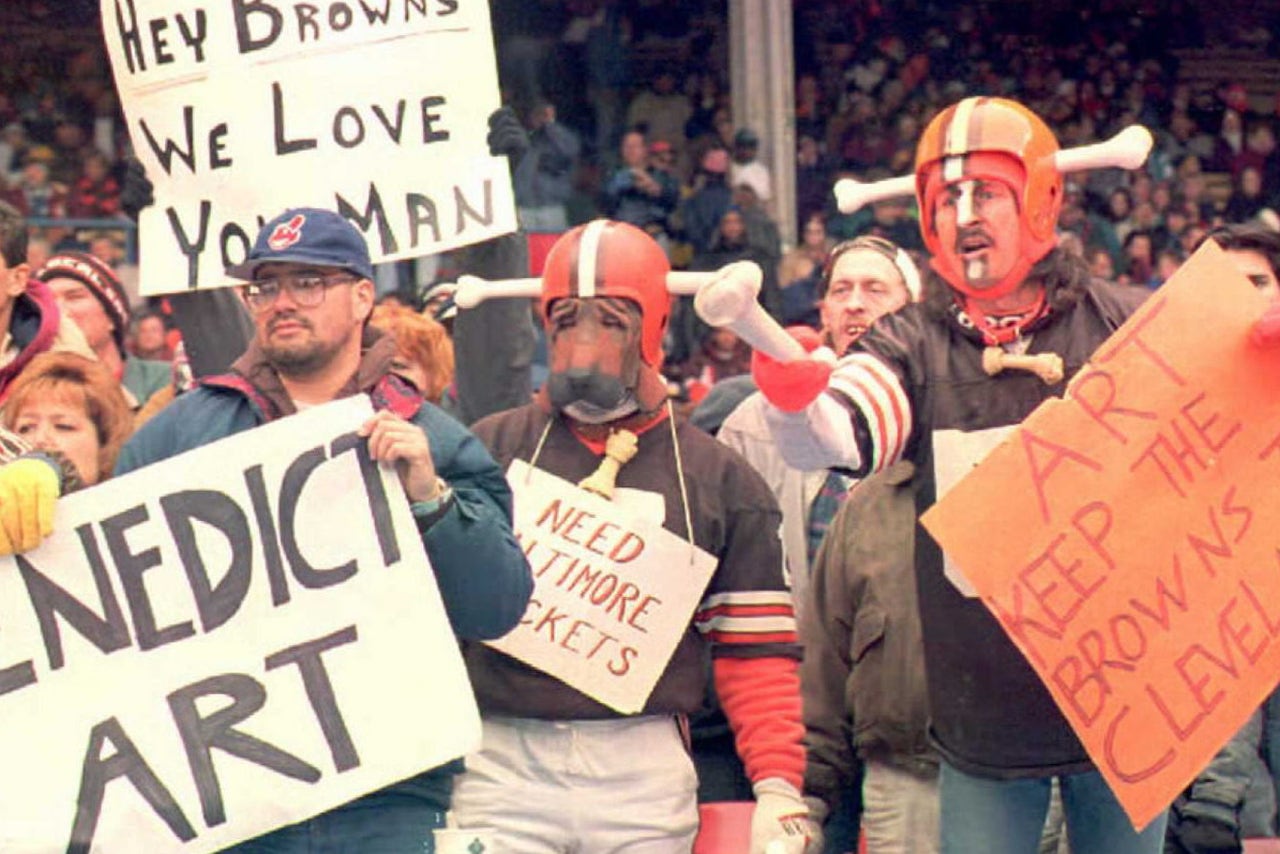 When the hapless Cleveland Browns meet the undefeated Cincinnati Bengals on national television this Thursday night, it will come on the eve of the 20th anniversary of “The Move” — more specifically, the day Art Modell officially announced the relocation of the original Browns franchise to Baltimore. That surreal, grotesquely festive press conference held on the afternoon of November 6, 1995, is far enough in the rearview mirror that an entire generation of Cleveland fans wasn’t even alive to witness it. And yet, much like the Indians’ remarkable World Series run that directly preceded it, the ripples created by that moment are still lapping up on the shores of Lake Erie to this day — slowly and irrevocably pulling an embittered fan base into the undertow.

The way we generally talk about them, the 1995 Indians and 1995 Browns seem to exist in alternate dimensions. One is the gold standard for rosy regional sports nostalgia — the “season of dreams that became a reality” — to paraphrase Tom Hamilton. While the other is the lamest of all lame-ducks — the once proud franchise forced to play out the string while its mumbling head coach and merciless demon owner prepare for unjust triumphs to come. The two narratives stand in stark contrast, and yet, they very much crossed over and co-existed in the fall of ’95 — almost magnifying their respective impacts in the process.

On the morning of October 27, 1995, Art Modell famously sat aboard his friend Al Lerner’s jet on the tarmac of the Baltimore-Washington International Airport, dutifully signing the paperwork that would end the Browns’ 50-year tenure in Cleveland. The very next day, October 28, Tom Glavine shut out the Tribe in Game 6 of the World Series to end Cleveland’s dream season on a surprisingly disappointing note. That’s two of the defining moments in modern Cleveland sports history occurring within hours of each other.

Rather than one measly Sunday raising our hopes and letting us down, this was a twisted ass-kicking of the soul on a much grander scale

Rather than one measly Sunday raising our hopes and letting us down, this was a twisted ass-kicking of the soul on a much grander scale — months, years, and decades in the making.

Keep in mind; it wasn’t just the Indians who had fans feeling uncharacteristically proud and optimistic before the other shoe dropped. When October began, the Browns — fresh off an 11-5 season and a second-round playoff appearance — were off to a 3-1 start under Bill Belichick, with many prognosticators considering them a leading Super Bowl contender.

The Tribe, meanwhile, was Major League come to life, having gloriously returned from 40 years in the baseball desert — selling out their new gem of a stadium and steamrolling the competition with a roster chock full of young superstars doing cartoonishly clutch things, including breezing through the ALDS and ALCS in the club’s first postseason appearance since 1954.

The phrase “perfect storm” has often been used to describe the Indians’ mid-90s success, as the opening of Jacobs Field lined up conveniently with the emergence of stars like Albert Belle, Carlos Baerga, Omar Vizquel, Kenny Lofton, Jim Thome, Manny Ramirez, etc. The Browns were always the lake effect in that same weather system, however — first as the franchise left in the lurch when the city poured funds into the Gateway complex, then as the departed NFL team that made baseball the No. 1 show in town once again from 1996-1999.

As the Indians established themselves as a perennial playoff team during the “Era of Champions” (an era sadly devoid of actual championships), the “perfect storm” awakened a fan base that had been dormant, if not aggressively disinterested, for half a century. Browns fans latched on to the Indians. Bandwagon fans latched on. People who’d never previously considered themselves baseball fans latched on. As an unexpected consequence, many new Tribe fans were introduced to a world that they came to identify as “baseball” — when in fact, it was “once-in-a-lifetime baseball” that they were witnessing.

Like a blind man first given sight while surrounded by supermodels, the new Cleveland Indians fan of the ‘90s was blessed by circumstances, but ultimately doomed by unrealistic expectations. And by the time the Jacobs Field sellout streak concluded and the team’s first rebuild began in the early 2000s, the perfect storm began to reveal its long-term damages.

Just a decade removed from two World Series appearances and re-loaded with another roster full of very good players, the playoff-bound Indians of 2007 finished near the bottom of the league in attendance — long before fans could complain about the trades of any Cy Young winners. There was no going back. A whole generation had been zapped into baseball consciousness during a moment of historic good fortune. And now, nothing beneath that — even a routinely competitive team with a competent front office — could ever appease the average spectator. Instead, nostalgia for the 20th anniversary of the ’95 Tribe was the best marketing ploy the 2015 Tribe could muster. In the end, the negative effects of losing the ‘95 (and 1997) World Series were nothing compared to the problems caused by the thrilling, unrepeatable success those ’90s clubs DID experience.

“Hey, the current Indians have the best strikeout pitchers in baseball and the best young shortstop and they’ve had a few winning seasons in a row and–”
“YAWN. Dolans are cheap. Go Browns!”

Which brings us to the lingering fallout from the 1995 Browns season; a moment in time that helped create a different sort of negative culture — solidifying a sense of victimization and dread that “The Drive” and “The Fumble” had only hinted at. While fans nobly fought to keep their team, and then just the intangible shell of their team (the “history” and colors), they wound up just clutching onto disease-ridden, brown-and-orange security blankets. Modell’s Browns rewarded them with a terrible farewell run (2-10 down the stretch), starting with a 37-10 shellacking at Municipal Stadium against the Houston Oilers on the bitterly cold Sunday before the Baltimore press conference (November 5, 1995). Advertisers had largely removed their banners from the ballpark that day, and fans started ripping out chairs from the 80,000-seat mausoleum. I was there. It was epically bleak.

Other youngsters like myself who were in attendance, while perhaps able to remember the heydays of Sipe or Kosar, were still unwittingly setting forth on a path toward unprecedented tests of allegiance. While we eventually found out we’d be getting a new team, we took the news with a new sense of caution: that team could leave us one day, too, so we better hang on tight. No matter how poorly the organization is run, how awful their drafting is, how many mind-boggling ways they lose…we have to hold on tight. Because they might leave us. And then we’d be stuck with nothing but that stupid, annoying baseball team to cheer for.

Oh, and I guess we’d have the Cavs, too…which I suppose warrants this final factoid. That same fall of ’95 when the mighty Indians fell to the Braves and the Browns broke our hearts, the Cavaliers — in their baby blue unis — started the season 0-7. LeBron James was 10 years old at the time, and was probably cutely pretending he was Michael Jordan instead of Terrell Brandon. And you probably were, too, weren’t you? You didn’t appreciate Terrell Brandon enough, and we’re all paying for it now. Somehow.