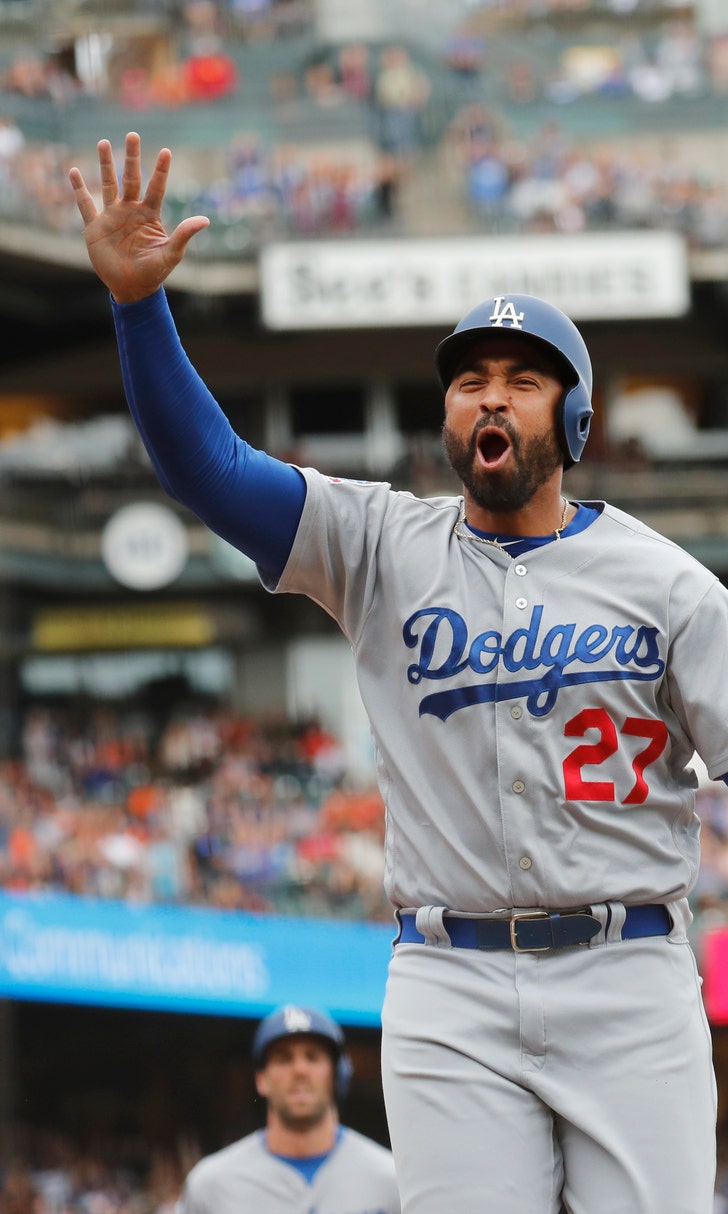 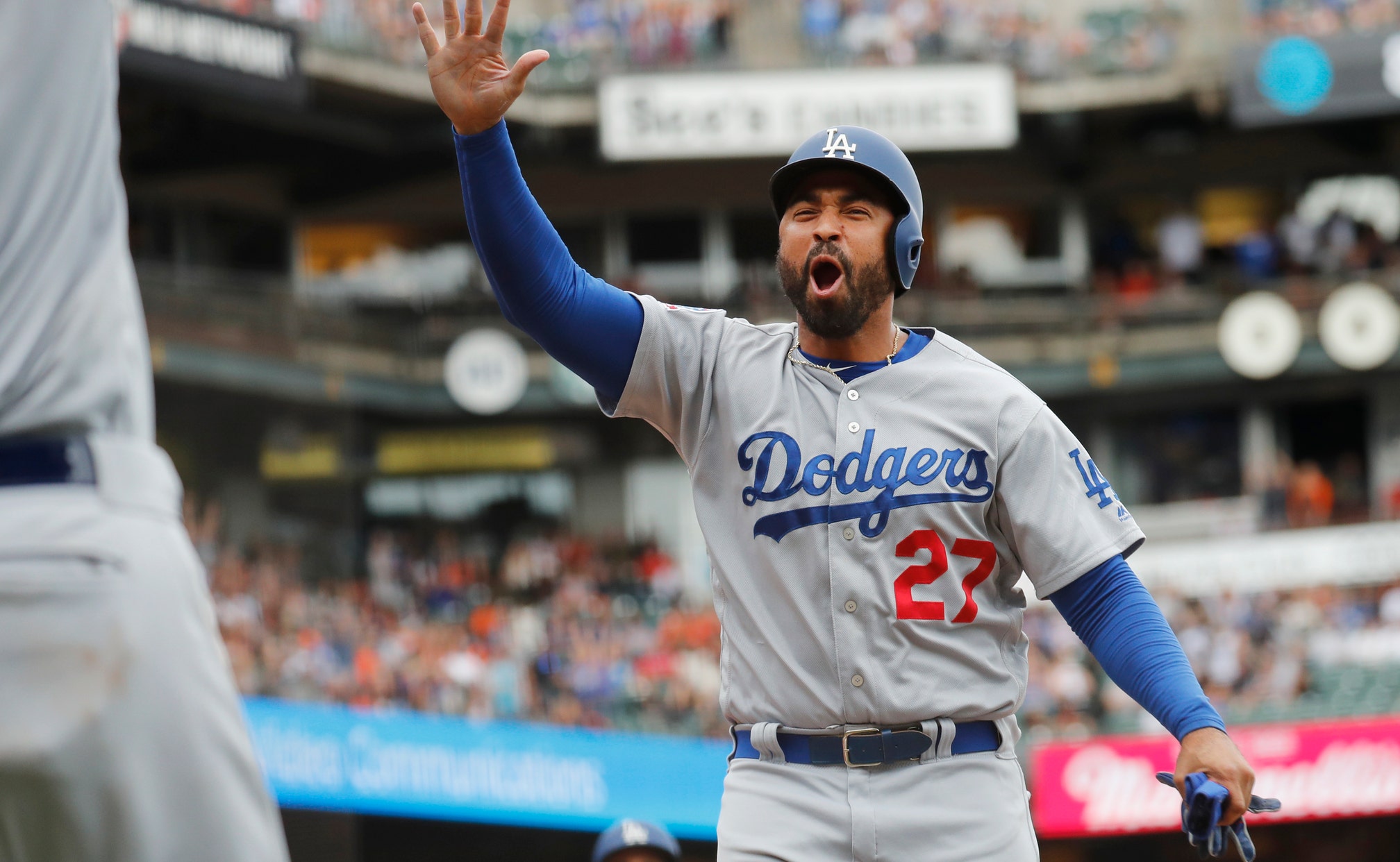 SAN FRANCISCO (AP) — The Los Angeles Dodgers clinched baseball's final playoff berth and gave themselves a chance to still win the NL West, getting a go-ahead triple from Manny Machado in the eighth inning Saturday and beating the San Francisco Giants 10-6.

The defending NL champions locked up their sixth straight trip to the postseason, assuring at least a spot in the wild-card game. The Dodgers joined Colorado, Atlanta, the Chicago Cubs and Milwaukee in the NL playoff field.

Los Angeles began the day one game behind Colorado for the division lead, and the Rockies hosted Washington later in the day. The regular season is scheduled to end Sunday — if Los Angeles and Colorado finish even, there will be a one-game tiebreaker for the West title Monday at Dodger Stadium.

Machado, the star infielder acquired from Baltimore during the All-Star break, hit a two-out triple off Mark Melancon (1-4) for a 6-5 lead. Max Muncy added a two-run double during a four-run ninth.

Alex Wood (9-7) pitched the seventh for the win and Kenley Jansen closed it out.

CHICAGO (AP) — The Cubs wasted a solid performance by Cole Hamels, sending the NL Central race to the final day of the season.

The Cubs would have wrapped up their third straight division championship with a victory and a loss by the Brewers to Detroit on Saturday night. Chicago and Milwaukee would meet in a tiebreaker at Wrigley Field on Monday if they wind up with identical records, with the loser then playing in a wild-card game at home on Tuesday.

The Cardinals kept alive their chance for a wild card, but were eliminated by the Dodgers' 10-6 victory at San Francisco. Miles Mikolas (18-4) pitched eight effective innings in his fifth straight win, and Carlos Martinez worked a perfect ninth for his fifth save in five chances.

Hamels (4-3) gave up two runs, one earned, and three hits in seven innings.

DENVER (AP) — The Colorado Rockies dropped into a tie with Los Angeles for the NL West lead with only one game left, routed by Stephen Strasburg, Juan Soto and the Nationals.

Hoping to hold their one-game edge, the Rockies instead saw their winning streak end at eight. The Dodgers were 10-6 winners in San Francisco earlier to ensure the race will go down to the wire.

With game No. 162 on deck, the Rockies (90-71) are attempting to accomplish something they've never done since entering the league in 1993: capture a division title.

If Los Angeles and Colorado finish tied, there will be a one-game tiebreaker for the West title Monday at Dodger Stadium. The loser will become a wild card.

BOSTON (AP) — Gleyber Torres and Giancarlo Stanton connected as the Yankees broke the major league record for home runs in a season and reached 100 wins.

Torres' two-run drive in the fourth was the Yankees' 265th of the year and moved them past the 1997 Seattle Mariners. Stanton pushed the record to 266 in the seventh with his 38th homer, a solo homer to left field.

A fan sitting in the seats above the Green Monster threw the souvenir back, and the ball bounced into Stanton as he rounded second base.

New York, which will host Oakland in the AL wild-card game on Wednesday, reached 100 wins for the 20th time in franchise history.

Brock Holt hit a two-run homer for the AL East champion Red Sox, who could be hosting the Yankees again in the AL Division Series starting week. Eduardo Rodriguez (12-5) got the loss.

Lance Lynn (10-10) got the win with three innings of relief. Aroldis Chapman earned his 32nd save.

BALTIMORE (AP) — Justin Verlander struck out 10 in six scoreless innings, helping the Astros take the opener of a doubleheader.

Houston shortstop Carlos Correa homered and hit a tiebreaking RBI double in the ninth inning. Will Harris (5-3) worked the eighth and Hector Rondon got three outs for his 15th save.

Verlander allowed three hits and walked one. His next outing will come in the postseason, which begins for Houston on Friday against Cleveland.

Baltimore's DJ Stewart tied it with a three-run homer off Joe Smith in the seventh. Sean Gilmartin (1-1) got the loss.

Jake Marisnick made it 5-2 with a two-run shot in the eighth.

Dallas Keuchel started and went three innings in his final tuneup for the playoffs. Brad Peacock (3-4) worked the fourth and Ryan Pressly pitched the ninth for his second save.

Baltimore enters Sunday's finale as one of only five big league teams since 1900 to lose 115 games.

Rays left-hander Blake Snell struck out 10 in five innings, but failed to win his 10th straight start. He was charged with a run and three hits.

Diego Castillo (4-2) got the win with two innings of relief. Sergio Romo pitched the ninth for his 25th save despite giving up a pinch-hit homer to Reese McGuire.

Cron's 30th homer got Tampa Bay on the board in the second, and Meadows put the Rays ahead for the first time with another homer off Ryan Borucki (4-6) in the seventh.

CINCINNATI (AP) — Michael Lorenzen singled home a run and got his first victory as a starter since 2015, helping Cincinnati snap its seven-game losing streak against Pittsburgh.

Pittsburgh has dominated the Ohio River rivalry, going 13-5 this season. The seven-game winning streak was the Pirates' longest against the Reds since 1991.

The Reds let Lorenzen (4-2) make three starts to finish the season after 42 relief appearances. He went 5 2/3 innings and gave up five hits. Raisel Iglesias got three outs for his 30th save in 34 chances.

Eugenio Suarez homered for the second straight game off Jameson Taillon (14-10), pulling out of his slump.

MILWAUKEE (AP) — The Milwaukee Brewers moved into a tie for first place in the NL Central with one game remaining in the regular season, getting two homers from MVP candidate Christian Yelich to beat Detroit and draw even with the Chicago Cubs.

Yelich turned on an 0-1 pitch from left-hander Daniel Stumpf (1-5) and lined it into the second deck in right to break a 5-all tie in the seventh inning. The left-handed slugger also hit a two-run homer in the third inning of the Brewers' sixth straight win.

The Brewers (94-67) were already assured of making their first playoff appearance since 2011, the last time they won the NL Central. They sure would like to get into the postseason again as a division winner, and Chicago opened the door by losing 2-1 to St. Louis earlier Saturday.

Yelich extended his hitting streak to 10 games, going 2 for 3 and driving in three.

Joakim Soria (3-1) got the win in relief. Jeremy Jeffress picked up his 15th save after striking out the side in the ninth

Nola (17-6) was stellar in his final start of the season, allowing two hits and striking out eight with four walks. The right-hander ended 2018 with a 2.37 ERA and 224 strikeouts in 212 1/3 innings. He likely will fall short of a NL Cy Young award after stumbling a bit in September.

The NL East champion Braves will play either the Los Angeles Dodgers or Colorado Rockies in the NLDS, and Atlanta still could host the series. The Braves (90-71) and Dodgers have the same record entering the regular-season finale on Sunday while Colorado entered Saturday with a 90-70 mark.

Odubel Herrera helped the Phillies take a 3-0 lead when he beat out a potential double-play grounder to short.

Seranthony Dominguez pitched a scoreless ninth for his 15th save in 19 chances.

Mauer had two hits and scored twice in what could be his final homestand after a 15-year career in Minnesota. Mauer has said he'll contemplate retirement once the season is over, but he's showing he can still swing the bat with a strong September.

Mauer, who entered the day with a major league-leading .410 average with runners in scoring position, drove in a run with a single as part of a six-run second inning. He is hitting .365 with eight RBIs in his last 16 games.

Corey Kluber gave up three runs and seven hits in five innings in his final regular season start for Cleveland while working on a short pitch count ahead of the playoffs.

Indians catcher Yan Gomes left the game in the bottom of the third with an injured right hand after he was hit by Alex Gordon's bat on a backswing as he attempted to throw out would-be base-stealer Mondesi.

After reliever Andrew Miller (2-4) gave up a single to Alcides Escobar in the sixth and a two-out walk to Whit Merrifield, Mondesi hit the next pitch into the left-center stands to break a 3-3 tie. The Royals added another run with consecutive hits by Gordon, Hunter Dozier and Ryan O'Hearn.

Vargas hit an RBI single in the first inning and a two-run homer in the fourth, both off rookie Jacob Nix (2-5).

Vargas' homer staked Zack Godley to a 4-0 lead and the Diamondbacks held on to give the right-hander his career-high 15th win.

Godley (15-11) allowed three runs and five hits in six innings, struck out five and walked two. Yoshihisa Hirano pitched the ninth for his third save.

The Padres again pulled within one run when Eric Hosmer homered off Brad Ziegler in the eighth, his 18th.

Nix allowed four runs and five hits in four innings, walked three and had no strikeouts.

NEW YORK (AP) — Much like the last few years of his truncated career, David Wright's finale was no fairytale at the plate.

Wright left to a long standing ovation before a sellout crowd at Citi Field in his farewell game for the Mets.

The team captain went 0 for 1 with a walk against the Marlins. He was removed after two plate appearances as planned, and on defense he handled a one-hopper to third base with no problem.

Wright joined teammates as they ran onto the field to swarm Austin Jackson, who hit the game-winning double, and then watched as the Mets played a postgame tribute on the ballpark video board. After that, Wright addressed the crowd in a postgame speech that lasted about 2 minutes, 20 seconds.

SEATTLE (AP) — Dee Gordon drove in the go-ahead run with a triple in the seventh inning, and James Paxton struck out nine to go over 200 for the season to lead the Mariners.

Paxton came into the day with 199 strikeouts and wasted no time becoming the sixth pitcher in team history to reach 200, striking out leadoff batter Jurickson Profar.

It was one of nine strikeouts in the game for Paxton, who allowed one run and seven hits over six innings and didn't give up a walk.

Seattle's ace become the first Mariners pitcher to reach the 200 strikeout mark since Felix Hernandez in 2014.

A majors-best 42-22 since the All-Star break, the A's are already locked into a trip to New York on Wednesday for the AL wild card playoff game against the Yankees.

Kaleb Cowart had an RBI single for the Angels, whose four-game winning streak ended with a landmark loss. The Angels (79-82) are guaranteed to finish with three consecutive losing records for the first time under manager Mike Scioscia, who hasn't announced whether his 19-year tenure is over.

Mike Trout, Shohei Ohtani and Justin Upton each went 0 for 4 for the Angels, who have made the playoffs just once since 2009 despite their annually bulky payroll. The Halos hadn't had three straight losing seasons since 1992-94.

Davis connected in the first off Tyler Skaggs (8-10), driving a two-run shot for his ninth homer in September and his fifth in seven games. The 30-year-old slugger matched Jimmie Foxx's 48 homers in 1933 for the fourth-most in a single season in A's history.