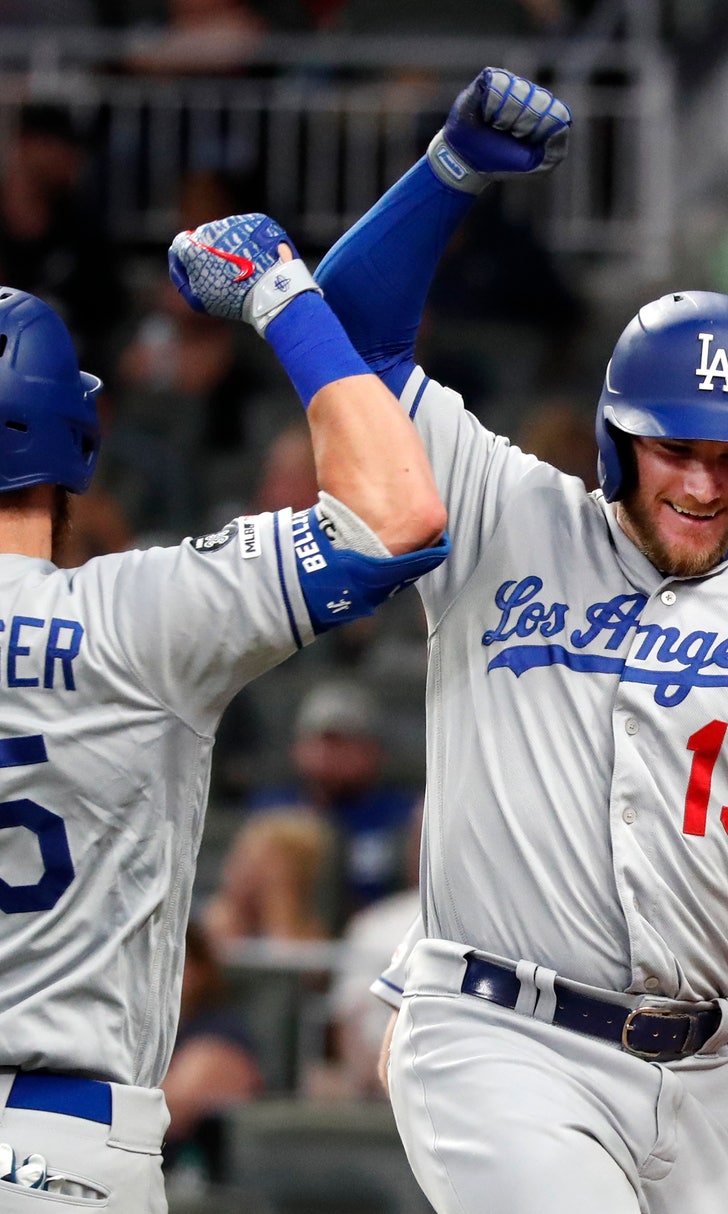 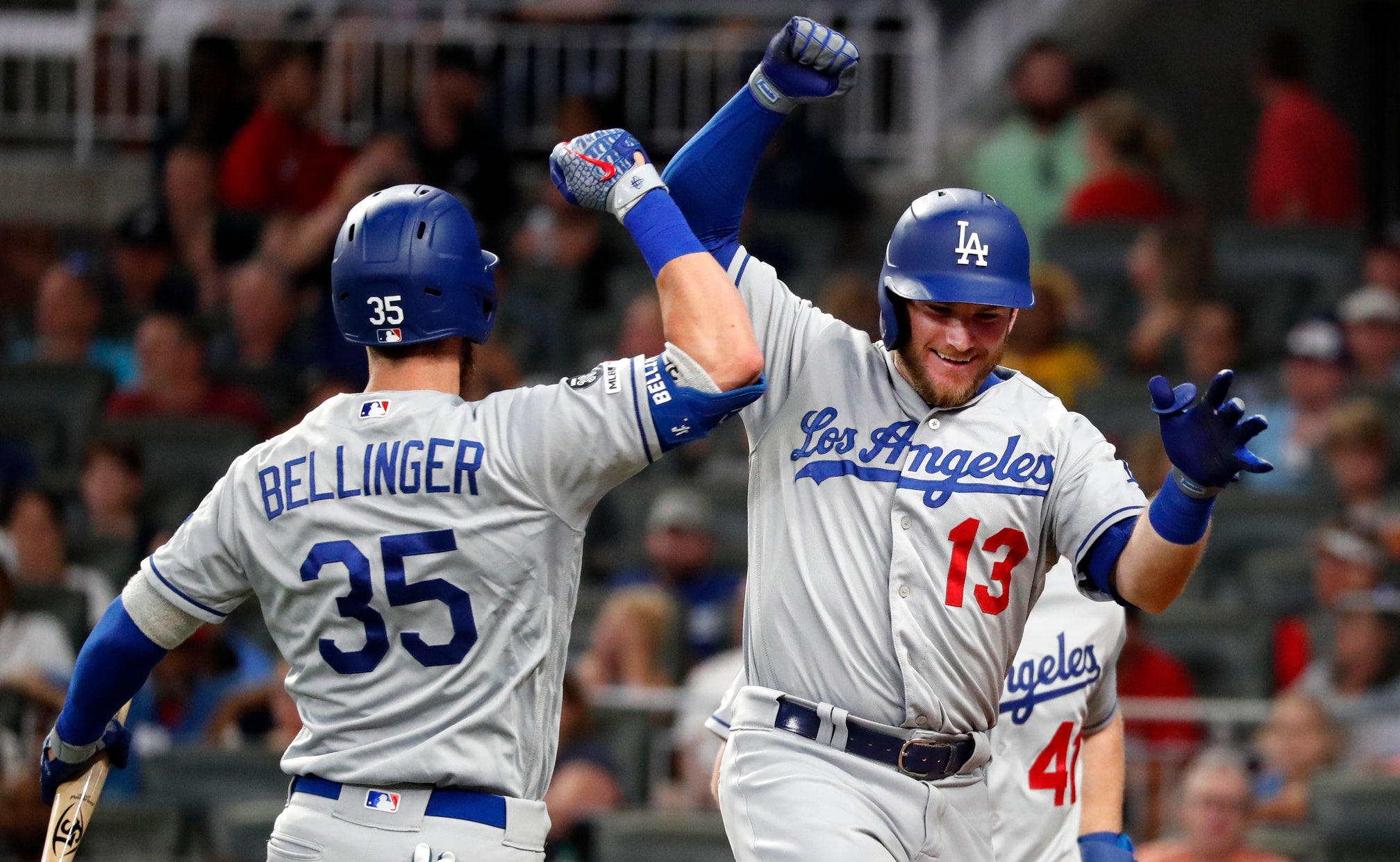 It was nothing new for the powerful Dodgers, who set a major league record with 22 homers in a five-game span when Will Smith launched a two-run shot off Jerry Blevins in the eighth.

The Dodgers improved to 18-6 against Atlanta since 2016, using Muncy's three-run homer and Turner's solo shot to lead 6-3 after Newcomb (5-3) relieved starter Mike Soroka.

Muncy's go-ahead homer sailed into the seats in right-center. Turner followed with a drive to the same part of the ballpark, the 14th time the Dodgers have gone back-to-back this season.

NEW YORK (AP) — Masahiro Tanaka pitched effectively into the seventh inning, Aaron Judge broke out of his slump with two hits and two runs, and New York rebounded from its worst home loss of the season.

New York (82-42) clinched its 27th consecutive winning record since 1993, the second-longest streak in major league history behind the Yankees' run of 39 seasons from 1926-64.

Gary Sánchez and Gleyber Torres each had an RBI single for the AL East leaders, who increased their cushion to 10½ games over Tampa Bay. They won for the 15th time in 18 tries and bounced right back from a 19-5 defeat Thursday night in the opener of this four-game series.

Cleveland, neck-and-neck with Minnesota atop the AL Central and leading the wild-card standings, lost for only the fourth time in its last 19 road games. The Indians are a big league-best 45-19 since June 4.

The Phillies had 12 hits, and tied their season-high winning streak at four while pulling even with the Chicago Cubs for the second NL wild-card spot.

The Nationals' five-game winning streak matched their longest of the season.

Washington shortstop Trea Turner led off the eighth with a walk off Junior Guerra (6-4), moved to second on Adam Eaton's sacrifice and scored on Rendon's double off the wall in right.

Rendon also drove in Washington's first run with a double in the third.

Hunter Strickland (1-1) worked a scoreless eighth in his first decision since the Nationals acquired him from Seattle on July 31. Sean Doolittle finished up for his 28th save in 33 tries.

Norris went the first three innings, VerHagen (3-2) gave up only three hits over the next five and Jimenez earned his third save by striking out Eric Sogard with two men on base to end the game.

Morton (13-5) gave up one unearned run on three hits in seven innings. It was the 19th time in 26 starts he has given up two runs or less, and the 20th time he has given up five hits or less.

BOSTON (AP) — Andrew Benintendi and Mitch Moreland each hit RBI triples in the fourth inning, Rick Porcello held the Orioles to one run over six innings, and Boston beat Baltimore.

Porcello (11-9) allowed four hits and a pair of walks while striking out two.

Benintendi finished 3-for-4 with two RBIs, Mookie Betts hit a solo home run and Chris Owings drove in two for the Red Sox, who have won three straight games and six of their last 10.

Trey Mancini drove in the only run for Baltimore in its fifth straight loss. The Orioles have dropped nine of 10, with seven losses coming to the New York Yankees.

Derek Fisher and Danny Jansen also went deep for the Blue Jays, who have hit 110 home runs since June 16. The New York Yankees entered play Friday with a major league-leading 112 homers in the same span. The Blue Jays have hit back-to-back homers 12 times this season, breaking the team record set in 1999.

Wade LeBlanc (6-7) has lost four straight decisions. He allowed seven runs and matched a career-worst by giving up 11 hits in seven innings.

PITTSBURGH (AP) — Pinch-hitter Cole Tucker drew a bases-loaded walk and Kevin Newman hit an RBI single, all with two out in the ninth inning, as Pittsburgh rallied to beat Chicago.

Tucker, pinch-hitting, worked a bases-loaded walk off Brandon Kintzler (2-2), and Newman followed with a single to center field on a full-count for his third game-ending hit of the season.

The Pirates won for the third time in four games.

Joe Musgrove carried a shutout into the eighth inning before giving up consecutive singles to Jonathan Lucroy and pinch-hitter Ian Happ with one out. Musgrove was charged with two runs in 7 1/3 innings, giving up four hits and no walks. He matched his career high with nine strikeouts.

Keone Kela (2-0) pitched a scoreless ninth for the win.

Giolito (13-6) became the first White Sox right-hander to have consecutive outings with 11 or more strikeouts since Javier Vázquez in 2007. He allowed two runs and three hits.

McCann, who launched a grand slam during the eighth inning Wednesday at Houston, did it again on Friday. His shot to left-center off a slider from Ty Buttrey was the fifth slam of his career. It also was McCann's 14th home run of the year, a career high. He had three hits.

AL home run leader Mike Trout hit a solo shot. It was his 41st of the season, which ties a career high from 2015.

Kolten Wong had a solo homer among his four hits and Fowler, Marcell Ozuna and Tommy Edman each had three as the Cardinals piled up a season-high 18 hits and moved into sole possession of first place in the NL Central.

Rookie sensation Aristides Aquino, who was the first player since 1900 to hit at least nine home runs in his first 14 games, made it a record 10 in 16 with a two-run shot deep into the left-field seats in Cincinnati's three-run sixth.

Castillo (11-5) tied his career highs with nine hits and three homers allowed, and set a career worst by yielding eight runs in 4 1/3 innings. The All-Star right-hander had three strikeouts.

Adam Wainwright (9-8) improved to 4-1 over his last seven starts. He allowed eight hits and four runs with one walk and six strikeouts in 6 2/3 innings.

Gray scattered five hits and didn't walk a batter in his best outing of the season. He threw 100 pitches and was an inning short of the second complete game of his career.

McMahon hit a two-run homer in the second inning, his 15th of the season.

Miami's Sandy Alcantara (4-11) was nearly as good as Gray, going seven innings and allowing just three hits. He walked four, including one ahead of McMahon's homer, and struck out just two. He retired the last seven batters he faced.

Arenado homered in the eighth, his 28th. Scott Oberg got the final three outs for his fifth save.

The Twins increased their AL Central lead to 1½ games over the Cleveland Indians, who lost Friday night.

Schoop homered in the seventh inning following a one-out single by Marwin Gonzalez. Kepler hit his team-leading 33rd homer in the fourth inning on the first pitch after Miguel Sanó reached when Rougned Odor dropped a popup in shallow right field.

Mike Minor (11-7) allowed all four runs in losing for the first time in four starts.

The Mets have lost four of five after a 15-1 stretch propelled them into the crowded NL wild-card race.

Montgomery (3-5) pitched six strong innings and allowed just one unearned run on five hits while striking out three and walking two. Ian Kennedy tossed a scoreless ninth for his 21st save in 24 opportunities.

Syndergaard (8-6) threw six innings and allowed just the two runs on five hits with six strikeouts, snapping a streak of six consecutive starts of at least seven innings. But after an RBI single from Michael Conforto in the third, the Mets couldn't generate anything else on offense.

For just the second time in major league history, the teams combined to hit 12 home runs. The Phillies and Diamondbacks combined for 13 earlier this season.

On Friday, the Diamondbacks hit five of their six homers after the seventh inning.

Kevin Pillar homered twice, with his second long ball giving the Giants a 9-7 lead in the 10th inning.

The Diamondbacks countered with home runs by Wilmer Flores, his second of the game, and Nick Ahmed off Giants closer Will Smith, sending the game to the 11th inning.

Smith (5-0) picked up the win despite blowing a save chance.

Brandon Belt also homered for the Giants, who have won five of six.

Mark Canha had three hits, including a homer, and Marcus Semien also went deep as Oakland beat the AL West leaders for the second consecutive night to move within a half-game of Tampa Bay for the league's second wild card.

Houston lost its fourth straight and wasted the latest strong performance by ace Justin Verlander. The 36-year-old right-hander had 11 strikeouts in seven innings to set a franchise record with his sixth game in a row of 10 or more.

Michael Brantley had two hits for the Astros.