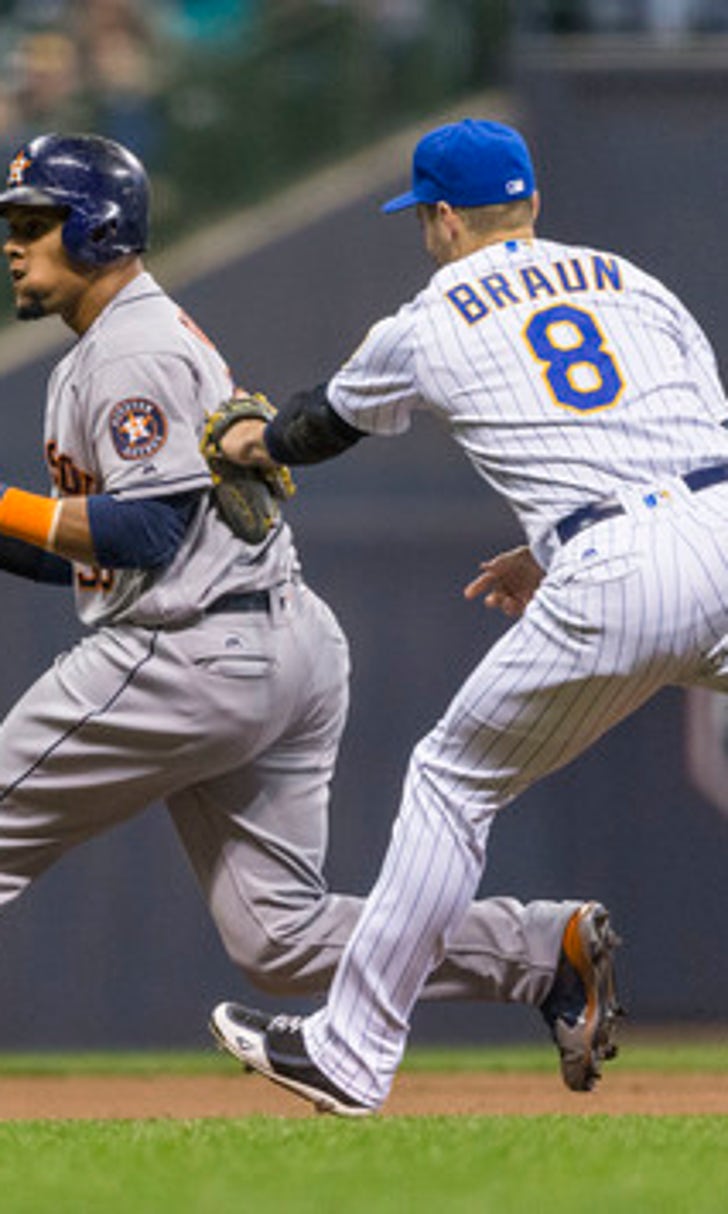 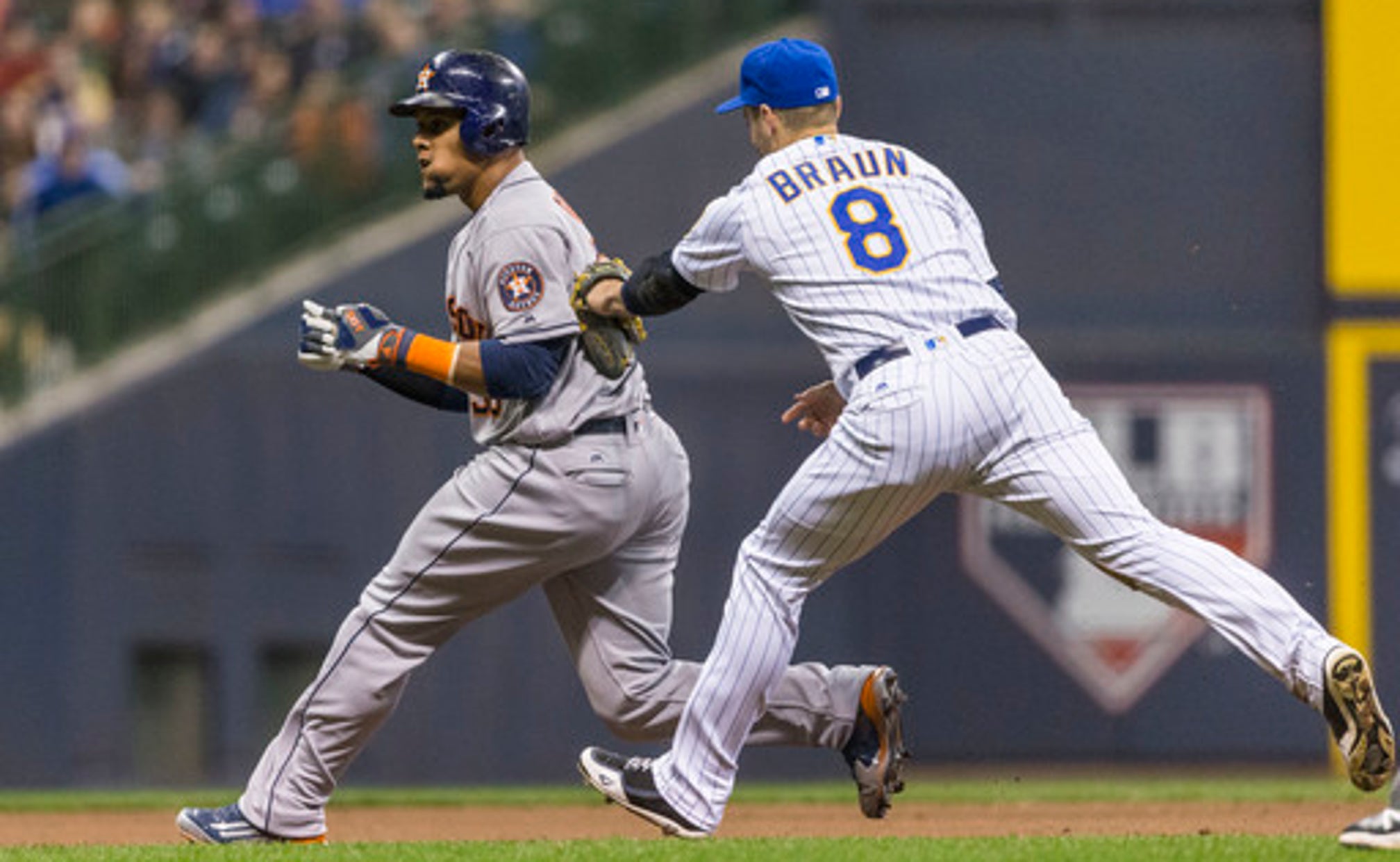 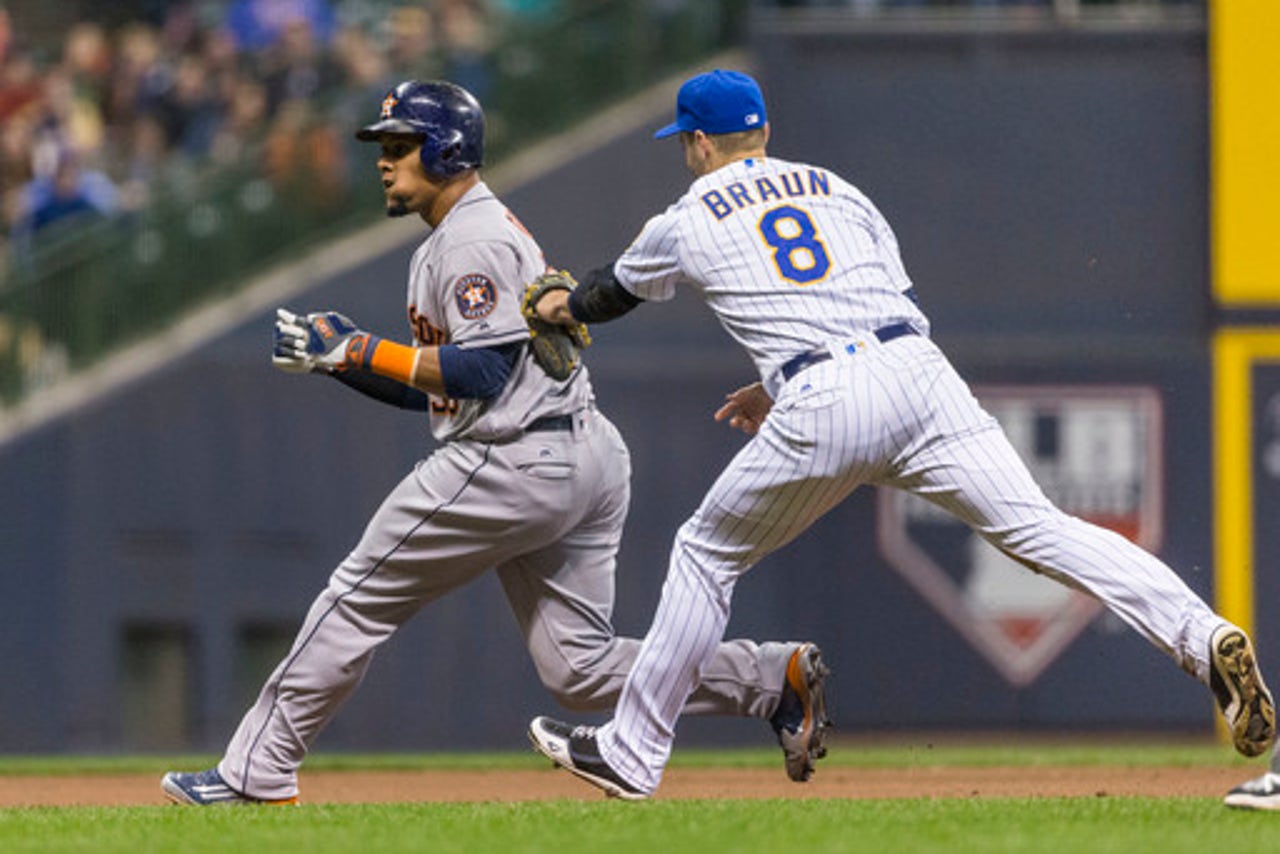 MILWAUKEE (AP) Colby Rasmus was called for interference on the ''Chase Utley rule,'' resulting in a game-ending double play and blunting the Houston Astros' ninth-inning rally in a 6-4 loss to the Milwaukee Brewers.

Down 6-0, the Astros scored four times in the ninth and put runners on first and second with one out.

Jose Altuve hit a bouncer to second baseman Scooter Gennett, who threw to shortstop Jonathan Villar for the forceout. Rasmus slid past the base, and Villar didn't make a relay to first.

Second base umpire Dan Bellino called Rasmus for not trying to stay on the bag, part of the requirement under baseball's new rule governing slides on potential double plays. The call was upheld after the Astros challenged the play.

It was the second time this week that ''Utley Rule'' call ended a game. Toronto lost two runs and a potential win when Jose Bautista was called for interference at Tampa Bay.

Rookie Tyler White hit a three-run homer in the ninth off Sam Freeman. White also doubled and singled, and is 9 for 13 since making his major league debut this week. He set a franchise record for most hits by a player in his first four games.

Jeremy Jeffress was credited with his second save after getting the double play, in spite of allowing a hit and walk in the ninth.

Anderson received plenty of support in making his first start for the Brewers since arriving in an offseason deal that sent starting shortstop Jean Segura to Arizona.

Gennett had a solo homer and Chris Carter added a two-run shot later in the first off Astros starter Scott Feldman (0-1).

Ryan Braun hit a two-run homer in the eighth, his first of the season for the Brewers.

Houston center fielder Carlos Gomez went 2 for 4 with a double in his first game back in Miller Park since getting dealt from the Brewers last summer. A fan favorite in Milwaukee for his energy and hustle, Gomez received a warm ovation his first time up to the plate in the second.

Astros: DH Evan Gattis (sports hernia surgery) had a single in four at-bats in the second night of his rehab assignment at Double-A Corpus Christi. Manager A.J. Hinch said that he would consider having Gattis catch during his rehab stint if it extended into next week.

Brewers: Manager Craig Counsell said that he'll stick with a four-man rotation with RH starter Matt Garza on the 15-day disabled list for a strained muscle in his back. Because of off days, Milwaukee wouldn't need a fifth starter until April 17 at Pittsburgh.

Astros: RHP Doug Fister makes his Houston debut on Saturday after signing a one-year deal as a free agent in the offseason. He gave up four runs in four innings in his only start against Milwaukee, a 5-4 loss in 2010 while with Seattle.

Lowe, Snell Pace Rays in Game 2 Win
Two home runs and nine strikeouts helped even the World Series at 1-1 on Wednesday. Here's how.
4 hours ago

World Series Top Plays: Game 2
Check out the top plays from Wednesday night's Dodgers-Rays matchup, as Tampa Bay got right back into the 2020 World Series.
8 hours ago

Special Delivery
Clayton Kershaw's postseason reputation may precede him, but the Dodgers star is setting the stage to flip the script.
14 hours ago