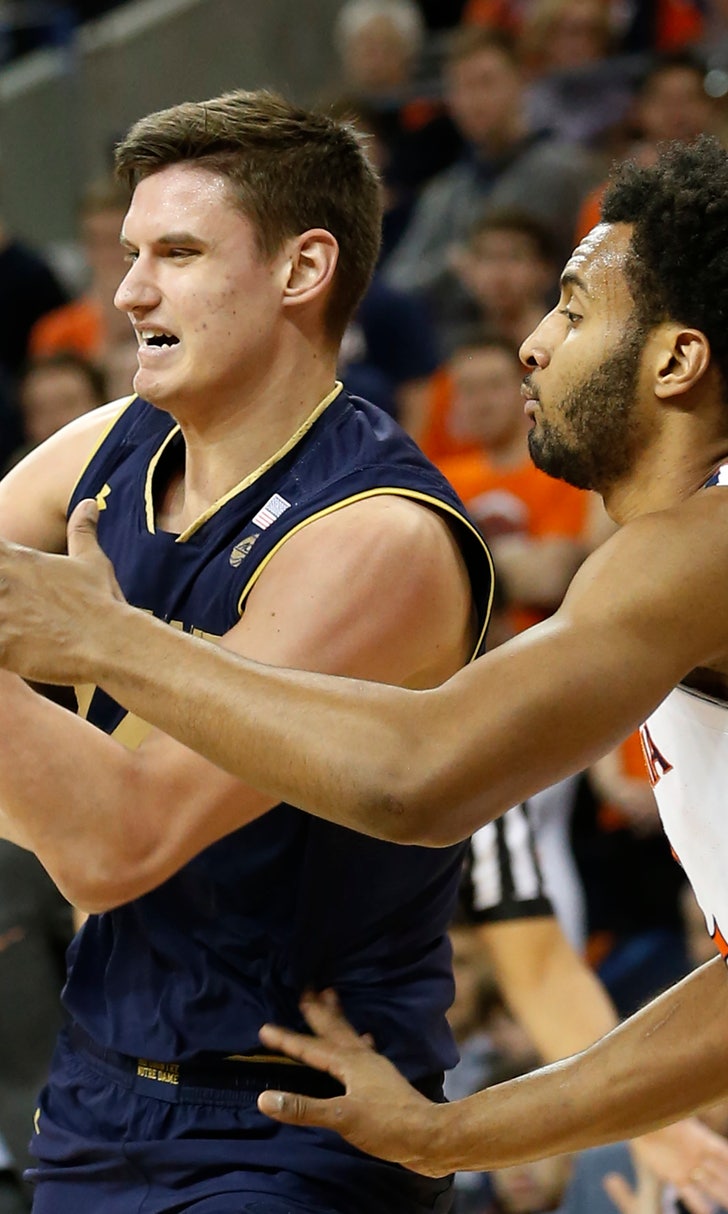 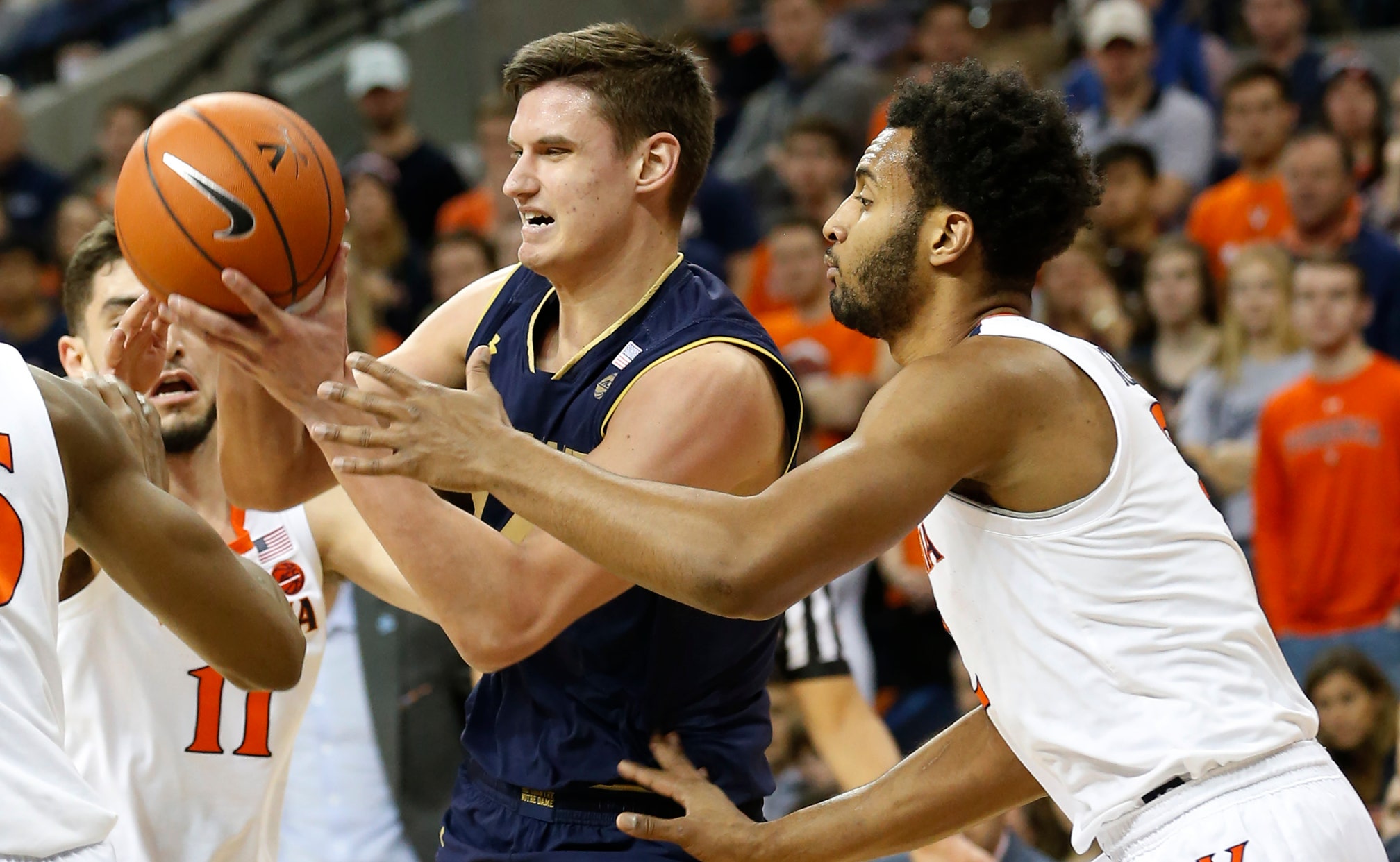 The Wildcats used a 25-7 surge over a little more than seven minutes for a 62-38 lead, providing a cushion that withstood the Volunteers' 13-0 spurt soon after that cut the advantage in half. Kentucky maintained a double-digit lead to win the highly anticipated matchup of top-five schools.

Barrett became the fourth Duke player with a triple-double and the first since Shelden Williams in January 2006. He completed it in the final minute, hitting Williamson for a layup that put Duke up 90-74.

Markell Johnson had 16 points and 10 assists for the Wolfpack (18-8, 6-7), who had their two-game winning streak snapped.

Zach Norvell Jr. added 18 points, Josh Perkins 15 and Brandon Clarke 14 for the Bulldogs (25-2, 12-0 West Coast). The nation's highest scoring team, Gonzaga had only 30 points in the first half but then scored 31 points in the first 9:59 of the second half to take control.

Notre Dame got within 54-52 in the final minute after Virginia went scoreless for more than four minutes. But Guy made four free throws to seal it.

The Wolverines (23-3, 12-3 Big Ten) rebounded from their loss at Penn State earlier in the week. Michigan raced out to a 14-2 advantage and led by as much as 15 in the first half.

Jazz Johnson contributed 12 points and Tre'Shawn Thurman had 11 points and 12 rebounds for Nevada (24-1, 11-1 Mountain West). The Wolf Pack shot 54.4 percent from the field

Freshman Coby White added 10 points, five rebounds and six assists for the Tar Heels (20-5, 10-2), who dominated from the tip following their first loss in a month.

Freshman Jaylen Hoard scored 17 points in an ugly afternoon for the Demon Deacons (9-15, 2-10), who suffered their most lopsided loss in three decades at Joel Coliseum.

WEST LAFAYETTE, Ind. (AP) — Carsen Edwards scored 15 of his 21 points in the second half and Matt Haarms added a career-high 18 for Purdue.

The Boilermakers (18-7, 11-3 Big Ten) reclaimed a share of the conference lead with their ninth win in 10 games.

Jared Butler scored 16 points and Mario Kegler added 15 for the Bears (16-9, 7-5 Big 12), who were without key backcourt players Makai Mason (foot) and King McClure (knee) for the third consecutive game.

Texas Tech (21-6, 9-4 Big 12) stayed in second place in the conference by using an uncharacteristic hot hand from 3-point range to surge into a first-half lead that was never threatened.

LOUISVILLE, Ky. (AP) — Christen Cunningham scored 16 of his 18 points in the second half to rally Louisville, which hung on in the final seconds.

The Cardinals (18-8, 9-4 Atlantic Coast Conference) led 56-49 with 17 seconds left after a free throw by Steven Enoch but then nearly lost a third straight in disastrous fashion. Marcquise Reed hit two 3-pionters that cut the deficit to one, but Louisville survived.

Freshman Devin Vassell came off the bench to score a team-high 11 while playing in his hometown for the Seminoles (20-5, 8-4).

The Tigers (21-4, 11-1 Southeastern Conference) are off to their best start in league play since the 1981 Final Four team was 11-0. They never trailed after Smart's 3-pointer midway through the second half, but Georgia (10-15, 1-11) stayed close and didn't allow LSU to lead by more than eight the rest of the way.

PISCATAWAY, N.J. (AP) — Joe Wieskamp banked in a 3-pointer from the corner with less than a second to play and Iowa posted a miraculous victory over Rutgers for its fourth straight win.

The Scarlet Knights appeared on the verge of their second upset of a ranked team this season when Gio Baker got a friendly role on a 3-pointer from the top of the key with 3.3 seconds to play to put Rutgers (12-13, 5-10 Big Ten) ahead 69-68.

After Iowa (20-5, 9-5) called a timeout, Connor McCaffrey threw a length of the court pass that Rutgers' Eugene Omoruyi deflected. The ball went to Wieskamp in the corner next to the Hawkeyes' bench and his off-balance, high-arching shot hit off the backboard and went in the basket, setting off a wild celebration on the Iowa bench.

The 6-foot-10, 250-pound Blackshear overwhelmed the undersized Panthers, making his first six field goal attempts on his way to a nearly flawless performance.