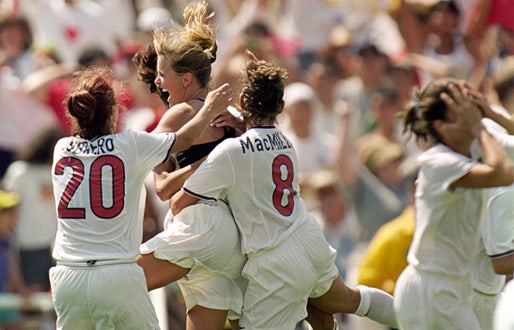 FINISH
1st
The first ever FIFA Women’s World Cup was held in China in 1991. The United States won each of its six games to capture the inaugural championship. Michelle Akers led the U.S. with 10 goals. Seven of the 12 competing countries scored fewer goals than Akers, and another, the host nation, matched her total.

FINISH
3rd
The defending champion U.S. squad won its group and made it out of the quarterfinal round before falling to the eventual winner, Norway, in the semifinal. The United States faced China in the third-place game, a rematch of their group stage game that ended in a 3-3 draw. This time around, the U.S. came out on top 2-0.

FINISH
1st
The United States hosted the 1999 World Cup and allowed just three goals throughout the entire tournament. A title match versus China took place at the Rose Bowl before a crowd of more than 90,000. After the game remained scoreless through extra time, the U.S. won the ensuing shootout 5-4, with an iconic deciding goal from Brandi Chastain.

FINISH
3rd
The United States again hosted the World Cup in 2003 due to a SARS outbreak in China. After winning its first four games, the U.S. lost 3-0 to Germany in the semifinal round. The team then faced Canada in the third-place game and won 3-1 to secure a top three finish in a fourth consecutive World Cup.

FINISH
3rd
The U.S. moved to five-for-five all-time in winning its group in 2007. However, a 4-0 drubbing by Brazil in the semifinal round sent the team to the third-place game for the second time in a row. There, the U.S. defeated Norway 4-1.

FINISH
2nd
The 2011 FIFA Women’s World Cup ended the United States’ streak of five straight first-place group stage finishes. The U.S. still managed to qualify for the knockout stage though, where it defeated Brazil and France before falling to Japan in the final.

FINISH
1st
Canada hosted the 2015 World Cup, which expanded to 24 teams for the first time. After winning its group, the United States recorded shutouts in three straight games to reach the final. Matched up against the defending champions, Japan, the U.S. raced to a 4-0 lead after just 16 minutes of play, spurred by a hat-trick from Carli Lloyd, and held on for a 5-2 victory.

With medals in all seven World Cups, including three titles, the U.S. is easily the most decorated team in international women’s soccer. Its title defense heads to France, where the U.S. will compete with Thailand, Chile and Sweden in the group stage.