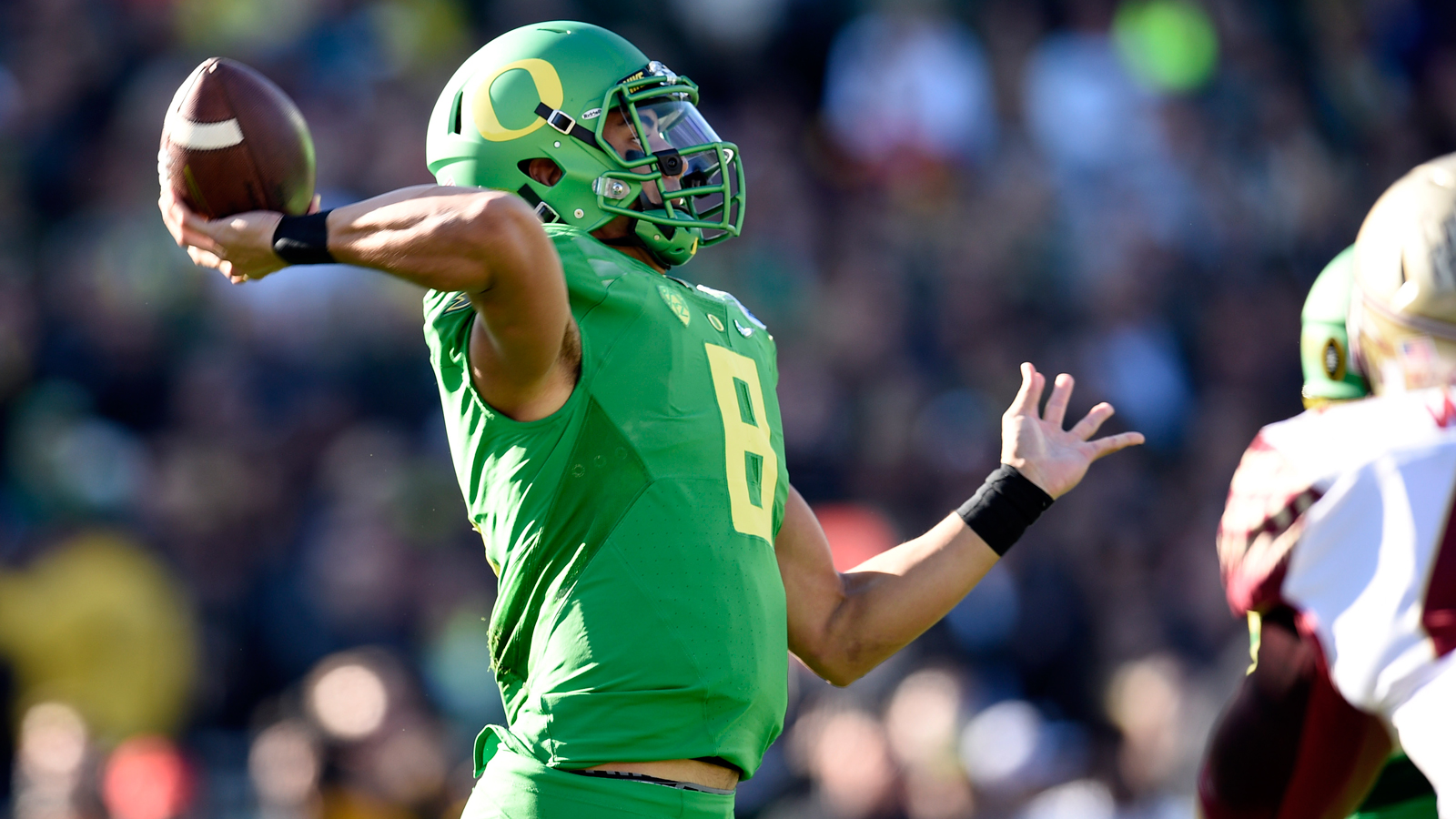 Oregon quarterback Marcus Mariota has added another award to his collection.

The Heisman Trophy winner was honored with the Manning Award for the nation’s top college quarterback Friday. The winner is determined by a vote from a panel of local and national media, as well as Archie, Peyton and Eli Manning.

Mariota announced Wednesday that he had decided to forgo his final season at Oregon and declare his eligibility for this year’s NFL draft.

The 6-foot-4 dual-threat quarterback led the 13-2 Ducks all the way to Monday’s national championship game, but Oregon ultimately fell 42-20 to Ohio State.

Mariota spoke Friday to reporters via conference call from San Diego, where he is training for the NFL combine. It was the first time he had spoken publicly since Monday night’s game.

"I’ll always be a Duck; very fortunate to be a part of that program," he said. "Now I’m looking forward to the next thing."

Mariota set a Pac-12 and school record for total touchdowns this season with 58, including 42 via pass, 15 on the run and one touchdown catch. He also set the conference mark for career touchdowns with 136.

Led by Mariota, Oregon finished No. 2 in this season’s final AP rankings. Overall, the Ducks ranked third in the nation in total offense with an average of 547 yards per game. The Ducks’ passing offense under Mariota was ranked 10th nationally with an average of 312.5 yards a game. Mariota’s passer efficiency rating (181.7) topped the nation.

He threw at least one touchdown pass in all 41 college games he played in at Oregon, starting in every one of his appearances.

Originally from Hawaii, Mariota was a three-star recruit out of St. Louis High School in Honolulu. He and his family made the decision to go pro the day after the loss to the Buckeyes in Arlington, Texas.

Archie Manning said Mariota had been to the Manning Passing Academy for three straight years.

"Marcus has kind of I guess blossomed a little bit," Manning said. "Kind of quiet and reserved the first year — nothing wrong with that when you come all the way across the country to a camp. He does such a great job with the kids. Last year I think we had nine Pac-12 quarterbacks, so we had way more from the Pac-12 than any other conference, with Marcus leading the way."

Mariota also addressed rumors that the Philadelphia Eagles may trade up from the 20th pick to get him in the draft. The Eagles are coached by former Oregon coach Chip Kelly.

"For me, whatever teams wants me, I’d love to play for them," Mariota said. "Obviously with my relationship with coach Kelly, it would be a lot of fun to be a part of that offense and be a part of the team. But for me, any team that wants me to be a part of their club, I’m all for it. Whatever happens, happens. And I’m looking forward to the process."