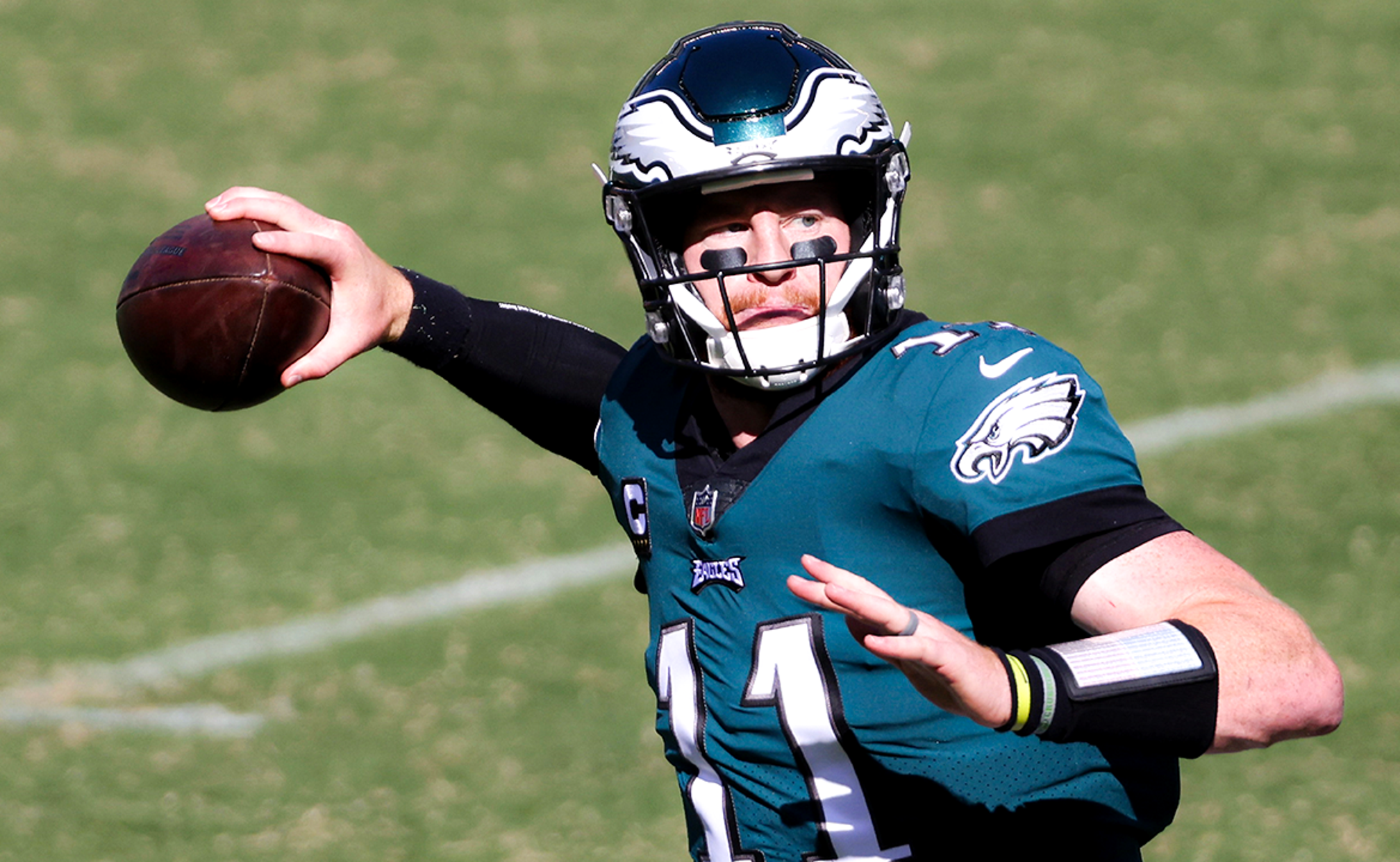 You know things are bad when fake fans get to booing.

Philadelphia Eagles quarterback Carson Wentz is having a rough start to the 2020 NFL season to say the least.

The Eagles are 0-2, losing by an average of two touchdowns per game. And so far, the collective finger is pointing at Wentz.

Does the blame for the Eagles' slow-start belong solely to Wentz?

The numbers argue that most of it does.

Currently, he's atop the league in interceptions.

He’s the only NFL quarterback who’s had a rating below 73 in two starts this year, and he has also fumbled the ball twice this season.

In addition, Wentz’s 64.4 passer rating stands as the fifth worst in Eagles history after two games among franchise QBs in the last 40 seasons.

"The Eagles don't have a QB problem, but their QB's play is problematic, and it needs to get fixed very quickly – both by him, and that coaching staff."

However, what might be most concerning regarding Wentz's play so far is how he's performed in the final 30 minutes of action in both Weeks 1 and 2.

In the second half of the Eagles' losses, Wentz is 23-for-44 for 214 yards with no TDs and 3 interceptions. He's posted a 37.5 second-half passer rating, which is worst in the league by a sizable margin.

The next worst is Cleveland Browns QB Baker Mayfield at 47.3.

Wentz has thrown 4 interceptions since his last touchdown, and after the first two weeks, Wentz dropped from No. 4 in league history in career interception ratio (one every 59 attempts) to No. 8 (one every 55 attempts).

In the first game of the season, the Eagles were up 17-0 at halftime, but in the second half, Philly did not score a single point and instead allowed Washington to put up 27 points, all of which came off of Eagles turnovers.

According to Michael Vick, Wentz needs to refocus in order to eradicate the costly mistakes.

"He's trying to do it all – it seems like he's trying to put the team on his back, which is what you are supposed to do, but you can't force it."

Meanwhile, Orlovsky believes Wentz's biggest problem is that he's dwelling in the past. 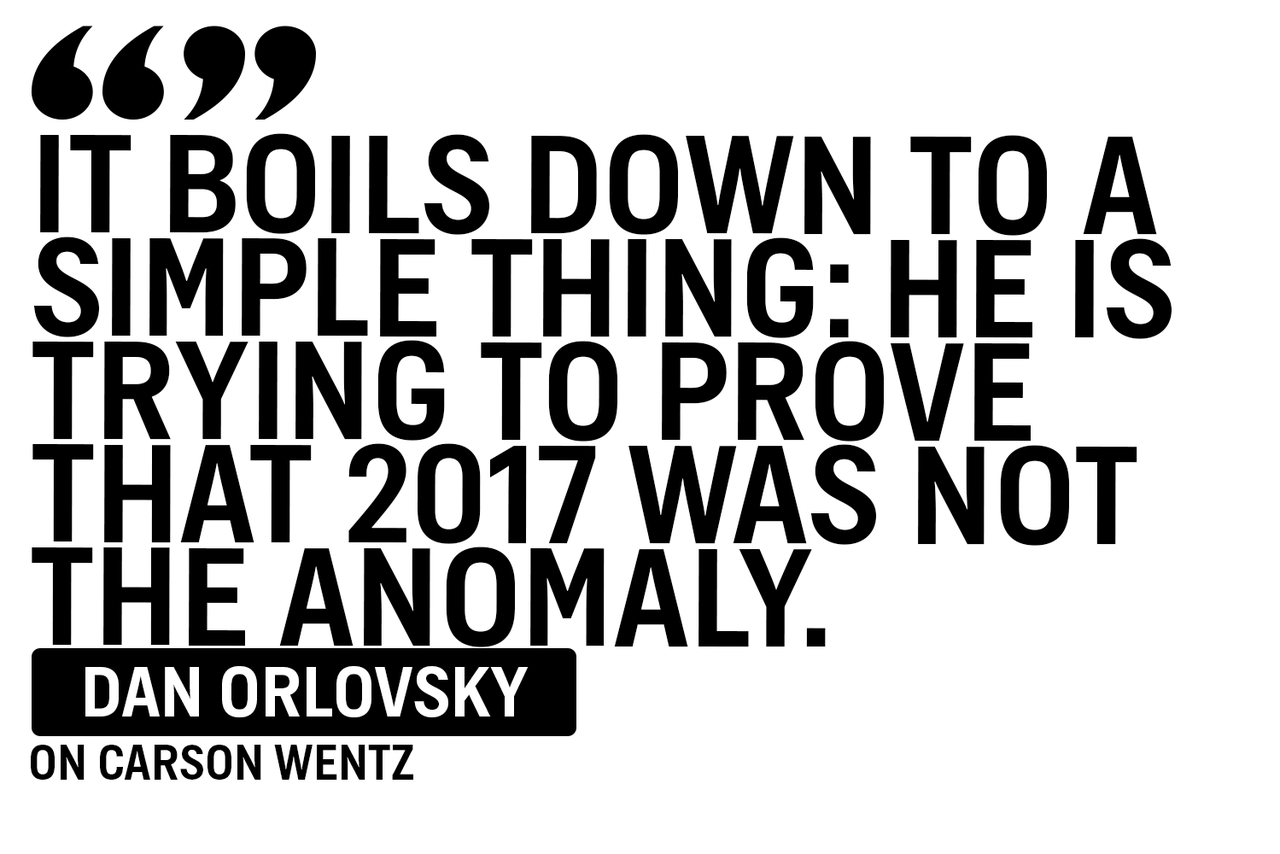 Wentz has struggled since his 2017 sophomore season, where he was an MVP front-runner before going down with a knee injury in Week 14.

Philly went on to win the Super Bowl that year, and the Eagles have made back-to-back playoff appearances since then, but Wentz's career has been fraught with injury and inconsistency.

Wentz has played only nine postseason snaps in the past two seasons, while the Eagles have compiled a 14-15 record (regular and postseason) in his 29 starts since winning the championship.

After recovering from an ACL tear in 2018, Wentz's numbers have placed him in the middle of the pack in terms of starting QBs.

For Philly fans – or in this case, sound technicians – middle of the pack just isn't going to cut it.

And in Max Kellerman's estimation, if Wentz can't right the ship, it might be time to make a change in the City of Brotherly Love.

The Eagles will host Joe Burrow and the 0-2 Cincinnati Bengals on Sunday at 1 p.m. ET, with both teams looking to earn their first win of the season.