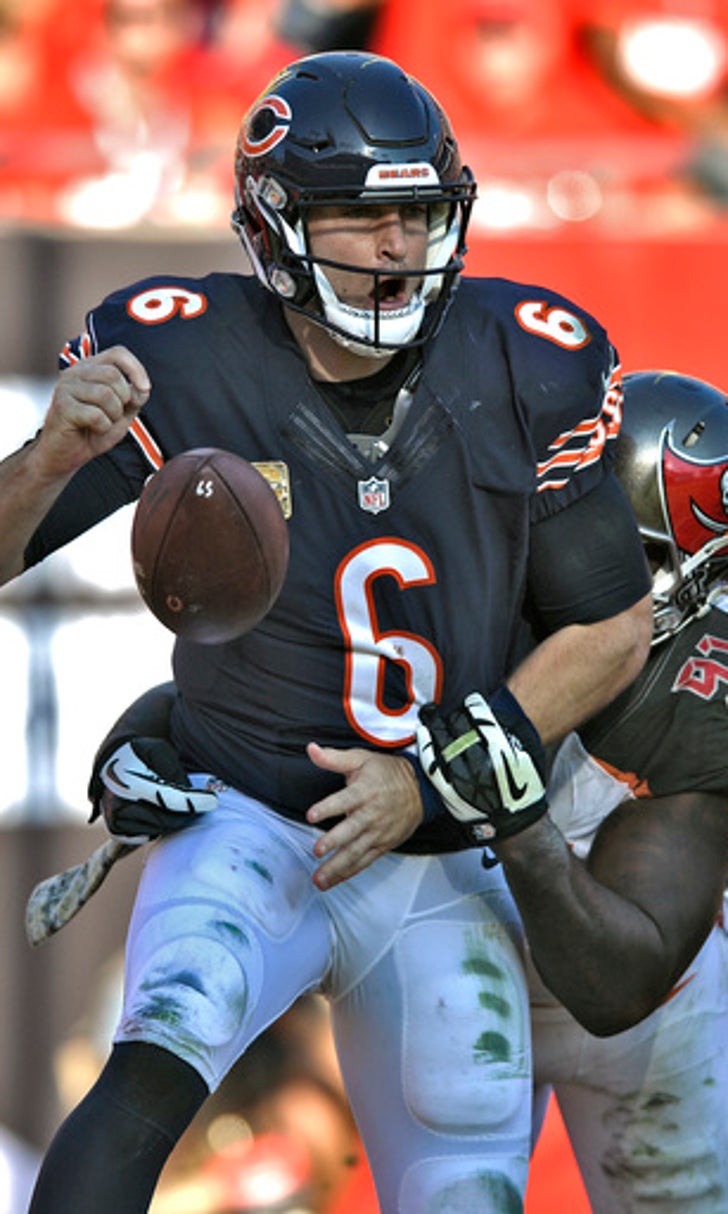 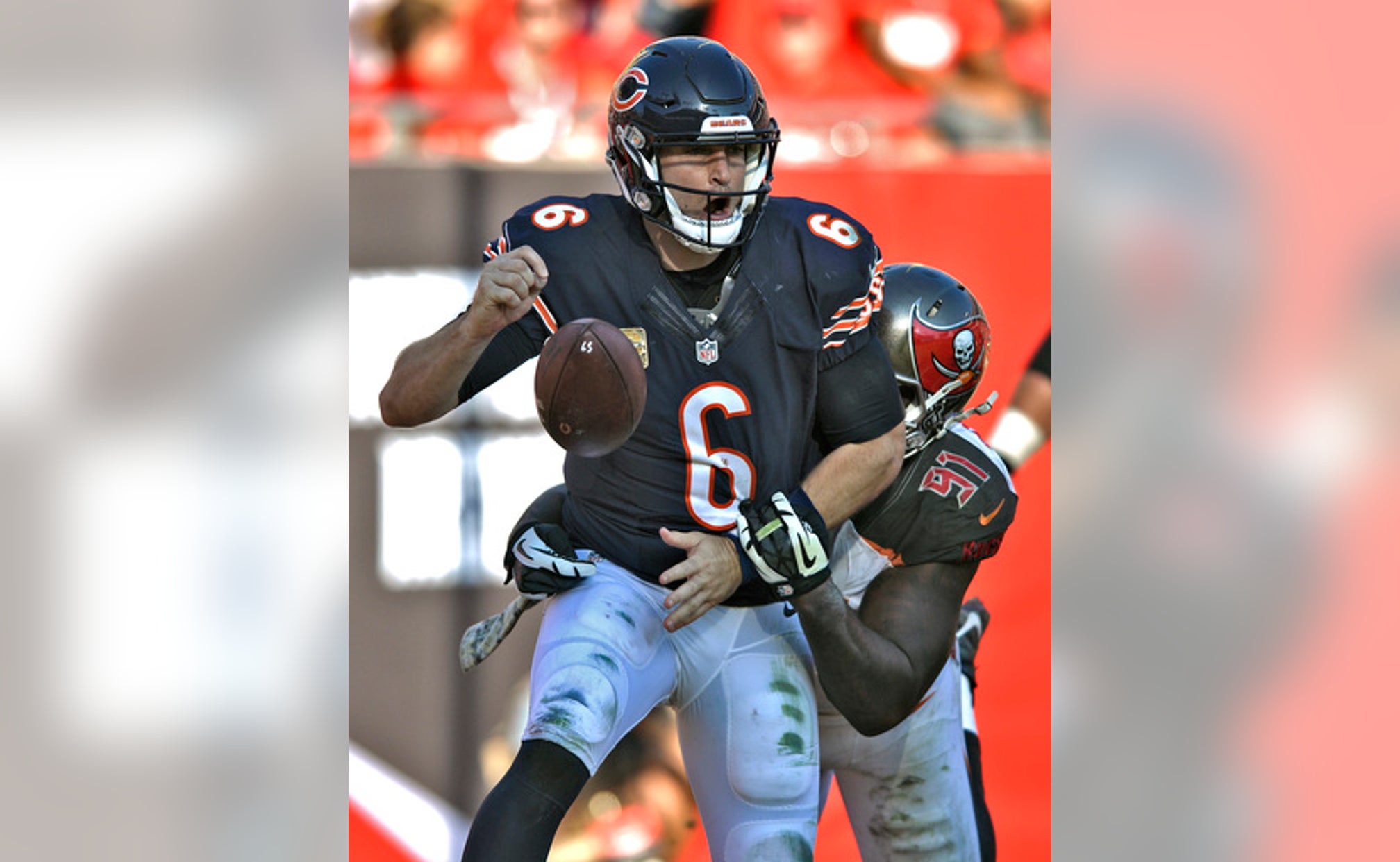 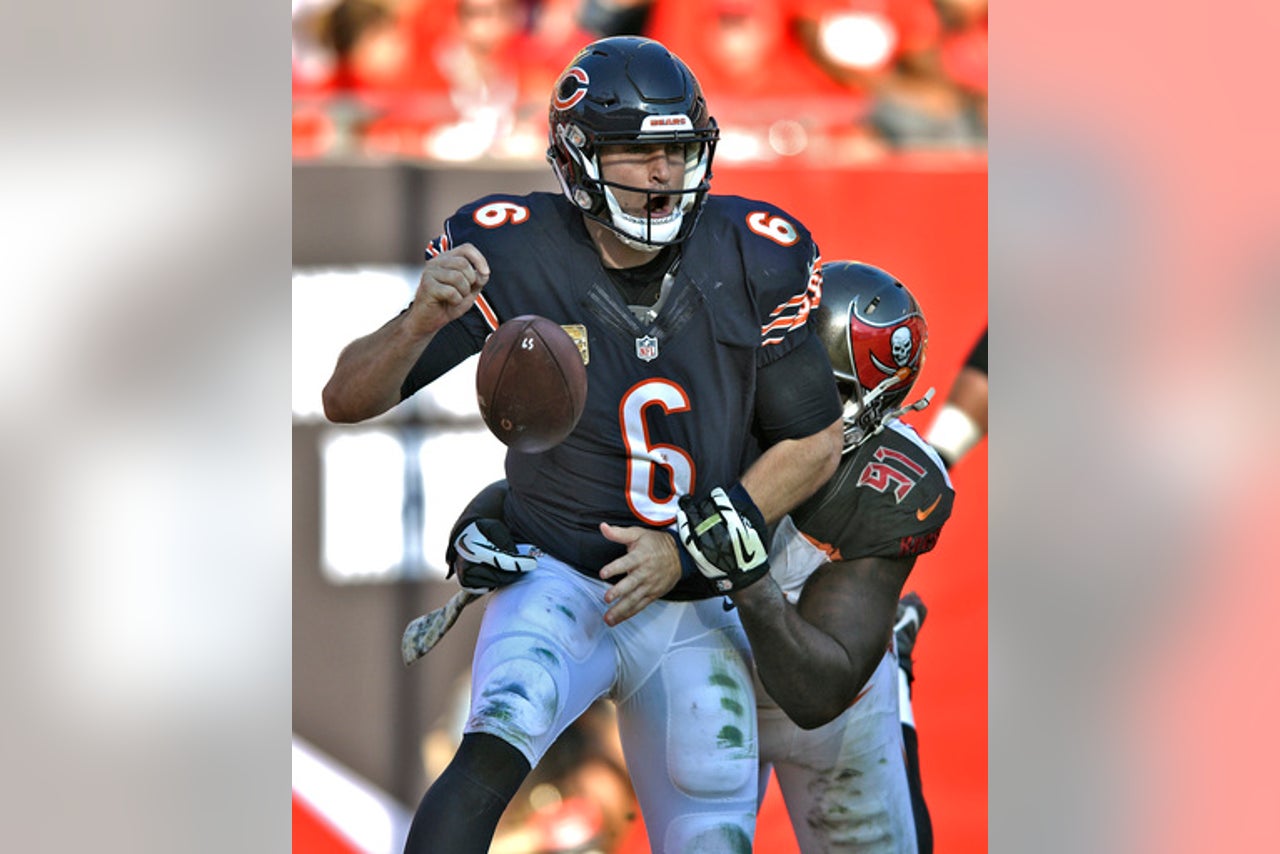 TAMPA, Fla. (AP) Jameis Winston threw for 312 yards and two touchdowns to lead the Tampa Bay Buccaneers to a 36-10 victory over the mistake-prone Chicago Bears on Sunday.

Winston threw for TDs of 10 yards to Cameron Brate and 43 yards to Freddie Martino, the latter set up by a bizarre highlight-reel play that saw the No. 1 pick in last year's draft scramble 23 yards backward into his own end zone before avoiding a safety and launching a 39-yard completion to Mike Evans at the Chicago 38.

Martino, a former practice squad player with two career receptions, scored his first NFL touchdown after a delay penalty pushed the Bucs (4-5) back to the 43.

Two weeks after returning from injury and helping the Bears (2-7) beat NFC North leader Minnesota, Jay Cutler threw two interceptions and fumbled twice, one resulting in a third-quarter safety that put the Bucs up 29-10.

The Bucs forced four turnovers overall and sacked Cutler four times. Even though the Bears are last in the league in scoring, it was a confidence-building performance for a defense that yielded 73 points and 1,087 yards - including 857 passing - in home losses to Oakland and Atlanta the previous two weeks.

Cutler missed five games with a sprained right thumb before playing well and not turning the ball over against the Vikings. The Bears had a bye last week, but the momentum they built against Minnesota didn't carry over to the trip to Tampa.

The Bears scored on Cameron Meredith's 50-yard TD reception on the final play of the first half. Cutler finished 16 of 30 for 182 yards, and Tampa Bay's Chris Conte returned a first-quarter interception 20 yards to give the Bucs a 7-0 lead.

Bucs running back Doug Martin returned from a hamstring injury that had sidelined him since Week 2. He rushed for 33 yards on 16 carries and scored on a 1-yard run that made it 36-10 late in the fourth quarter.

Deep in their own territory and down two touchdowns after turning the ball over four times, the Bears weren't content with merely running out the final 31 seconds of the opening half. They used timeouts after Jeremy Langford's 13-yard run and Cutler's 4-yard completion to the reserve running back, then set themselves up for a final play when Ka'Deem Carey scampered 16 yards to midfield on a reception before getting out of bounds. Cutler heaved his 50-yard TD pass to Meredith in the back of the end zone to finish a four-play, 83-yard drive.

Winston's second-quarter TD pass to Brate was the 40th of the second-year pro's career. At 22 years, 312 days old, he's the youngest quarterback in NFL history to reach that plateau, doing it in 25 games. He's on pace to top 4,000 yards passing for the second straight year, and has thrown for 19 TDs vs. 10 interceptions this season.

Bears: Lost the right side of their offensive line in the first half, with guard Kyle Long leaving with an ankle injury and tackle Bobby Massie suffering a concussion. Defensive lineman Will Sutton (ankle) left early in the third quarter and did not return.

Bears: Remain on the road, facing the New York Giants.

Buccaneers: Continue a stretch of four consecutive games outside the NFC South, traveling to Kansas City,

Stakes still high for struggling Giants, Eagles
The Giants and Eagles are woeful, but one can take a big step in the NFC East race Thursday. FOX Bet previews how to wager on this one.
11 hours ago

Herd Hierarchy: Week 7
Another week, another new No. 1 team in Colin Cowherd's 'Herd Hierarchy.' Find out who's in front heading into Week 7.
19 hours ago
those were the latest stories
Want to see more?
View All Stories
Fox Sports™ and © 2020 Fox Media LLC and Fox Sports Interactive Media, LLC. All rights reserved. Use of this website (including any and all parts and components) constitutes your acceptance of these Terms of Use and Updated Privacy Policy. Advertising Choices. Do Not Sell my Personal Info