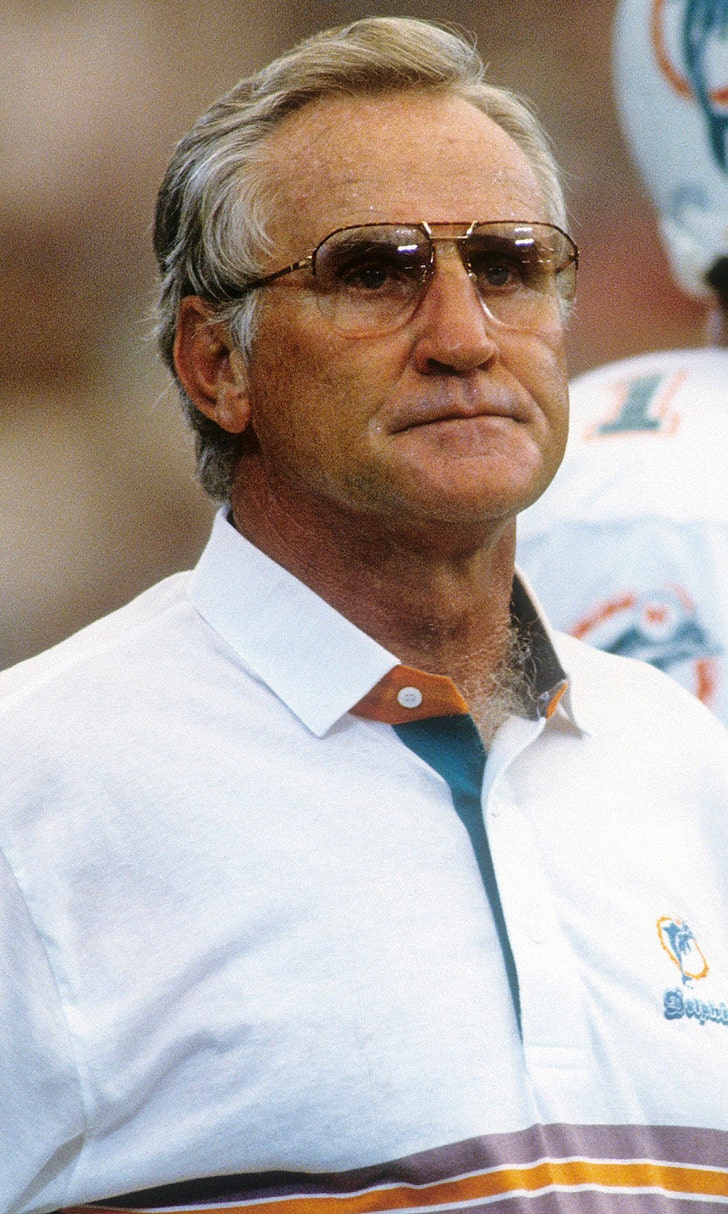 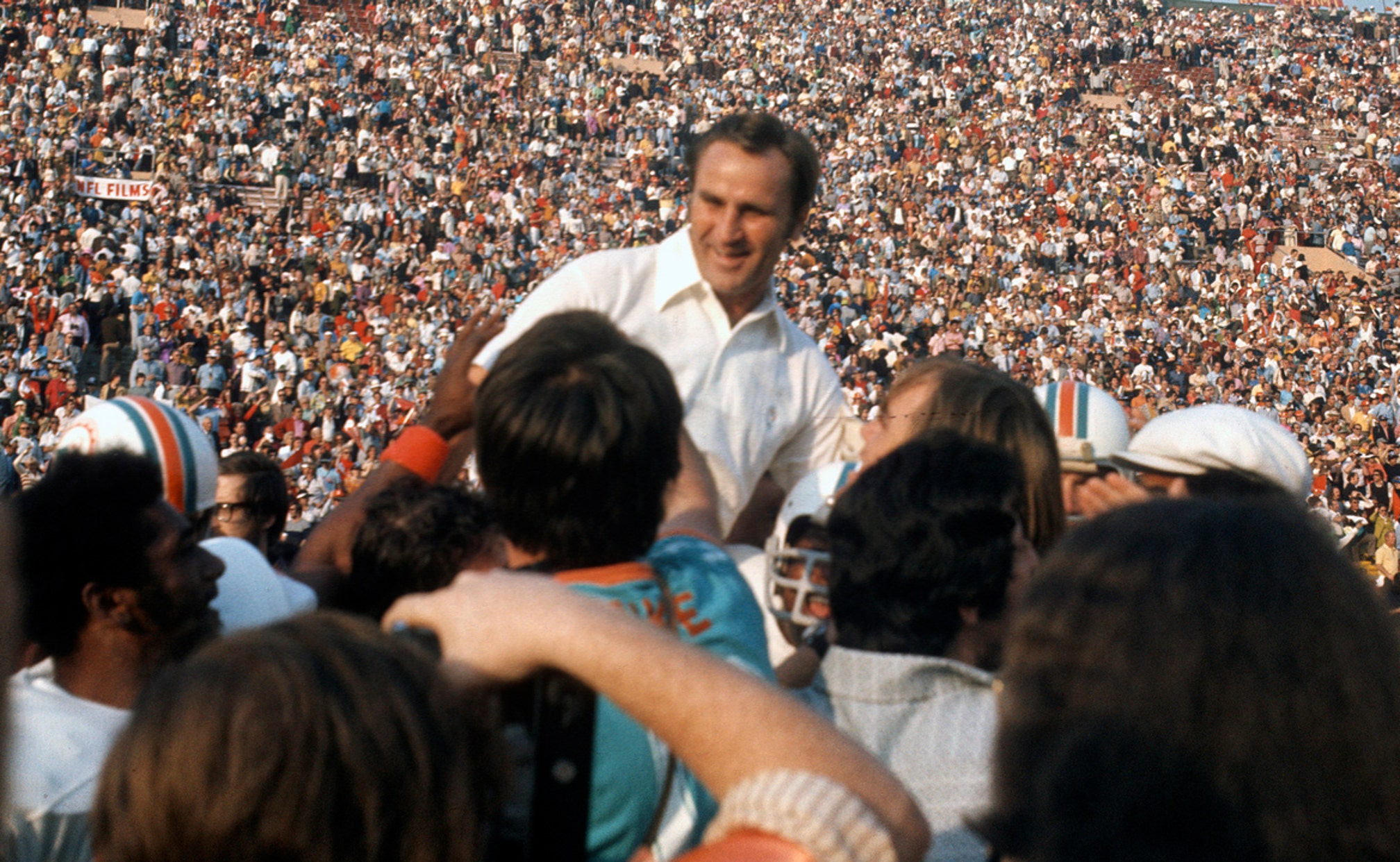 There have always been a lot of ways to lose a game in the National Football League, because there are so many things that can go wrong.

Inopportune fumbles through gloves, off the ground, or even someone’s butt. Injuries and lapses in judgment, lucky bounces and plain old loss form. Opponents who spend all week studying you, and a culture that dictates that everyone gets up most for playing the best of the best.

Unpredictability and travel proliferation and all kinds of things lead to a reality that a team which loses 30 percent of the time is doing really darn well and will probably be considered a Super Bowl contender. Truly, professional football is structured in a way that essentially guarantees everyone loses plenty. And as a rule, everyone loses at least once.

With one exception: Don Shula’s Miami Dolphins of 1972.

Shula died on Monday at the age of 90. He never saw another team complete a perfect season in his lifetime, and the way things are going, we may never see one in ours, either.

That 1972 campaign was extraordinary and historic, the only one of its kind, but he made winning normal. He worked his players so hard in training that the games seemed easy, but they loved him for it then and continued to do so for decades afterwards.

“I never really knew until that moment how close that rascal had really got to me, until he was gone,” former Dolphins running back Larry Csonka told reporters. “Unfortunately, through the course of my life, losing parents and different loved ones, you realize after they’re gone how much more they meant to you than what you realized when they were here. I hope I can be better at that in the future because I felt a terrible loss. I felt like someone very close to me and my family had passed.”

Shula was the biggest figure in that Dolphins organization, but he never made his players feel they were being overshadowed. He remains like a myth – as does his perfect campaign.

Shula’s teams won with passing, with running, and with shutdown defense. He won with superstars like Dan Marino under center, and with more unheralded types, like 1972 quarterback Earl Morrall. He won with innovation, establishing now commonplace practices such as substituting certain players into a game based on the situation, and unleashing Marino in an era when the run dominated the league.

He supervised a time when the Dolphins were the alphas of the NFL instead of a laughing stock, which is part of why it all feels so long ago.

Shula was in the game for an eternity, starting off with the Baltimore Colts in 1963, and racked up a career total of 328 regular season wins, a mark that is better than anyone’s, but may be toppled eventually by Bill Belichick, who sits 55 behind.

Belichick’s New England Patriots looked like they might get to that same magical chalice of perfection in the 2007 season, going 16-0, but falling short in the Super Bowl thanks to, among other things, David Tyree clutching The Catch to his helmet in one of the big game’s most remarkable moments.

Over the years, Shula made some spiky comments about Belichick, especially in the wake of the Spygate scandal, and also passing reference to Inflategate and its fallout. A competitor, perhaps, right to the last.

No one else has gotten near, and there isn’t much reason to expect that to change.

To start with, winning 16 games is a brutal task. It is so easy for an injury to a key player to uproot everything, plus the reality that a perfect regular season counts for nothing without the Super Bowl trophy to seal the end of it. Once a team reaches 12-0 or 13-0, the carrot of resting key starters and getting a head start on postseason preparations is too good an opportunity to let slip by.

The record of the perfect season is one that Shula, and those Dolphins, will keep defending – even with him gone. Still, let's not forget that Shula was more than just that perfect season. He won, and won, and won some more, posting just two losing seasons in 33 years as an NFL head coach.

In the NFL, it is mightily hard to sustain dominance. Players that elevate teams then want to be handsomely rewarded for their troubles. You can’t keep everyone happy, and once teams get good, there is no guarantee they will stay good.

“We are in the midst of an unprecedented drought in the NFL,” FOX Sports' Nick Wright said on First Things First. “The longest time we have gone without repeat champions. It has been 15 years.”

It is comfortably possible to imagine how there could be a repeat champion, which will probably happen again sooner or later. Perfection? Forget about that happening again.

Instead, remember the time that it did, and the man that made it so.

Not The Same Old Browns
As he makes his picks for Week 7, Jason McIntyre has a word of caution: Beware first impressions, especially with Cleveland.
2 hours ago

The Carson Wentz Conundrum
Eagles quarterback Carson Wentz can both frustrate and amaze. Is he the key to Philly's success or officially an impediment?
4 hours ago

Eagles Rally Late, Beat Giants
Somehow, at 2-4-1, the Philadelphia Eagles are in sole possession of first place in the NFC East after Thursday's win.
18 hours ago

As Odell's World Turns
Odell Beckham Jr. has never been one to shy away from the spotlight. And this week has been no different.
1 day ago
those were the latest stories
Want to see more?
View All Stories
Fox Sports™ and © 2020 Fox Media LLC and Fox Sports Interactive Media, LLC. All rights reserved. Use of this website (including any and all parts and components) constitutes your acceptance of these Terms of Use and Updated Privacy Policy. Advertising Choices. Do Not Sell my Personal Info