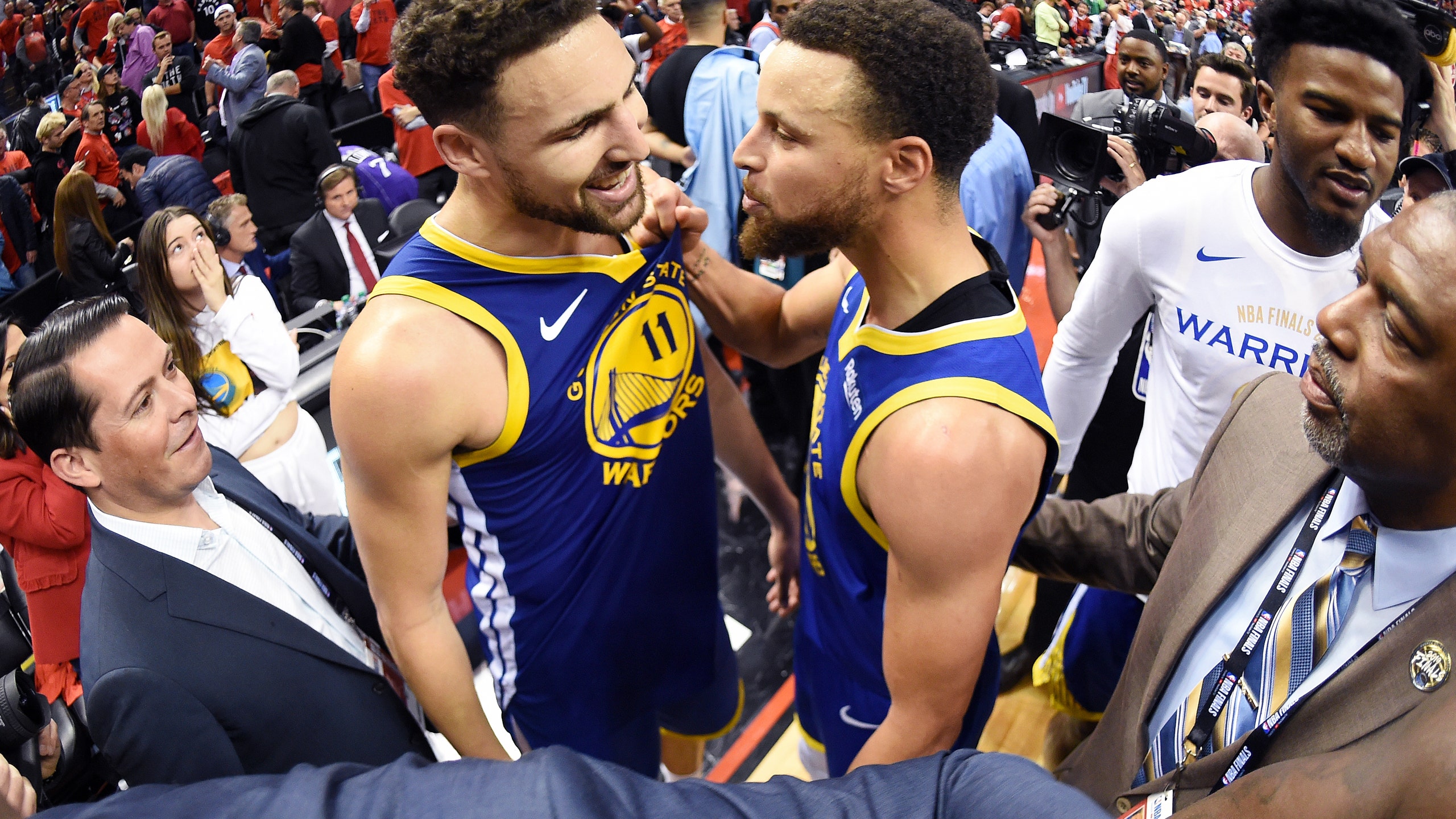 Stephen Curry has talked to Klay Thompson a few times since his backcourt partner had surgery to repair his right Achilles' tendon a week ago.

Even though Thompson was dealt a devastating blow that will force him to miss his second consecutive season for the Golden State Warriors, Curry said he earnestly believes Thompson will persevere.

After all, Curry heard it in his teammate's voice.

"It hasn't killed his spirit," Curry said Wednesday.  "We know how energetic and the magnet that Klay is in his personality. It hasn't changed that."

Thompson, who was on the brink of making a comeback from a torn ACL in his left knee that he sustained during the 2019 NBA FInals, suffered the Achilles injury during a workout in Los Angeles two weeks ago on the day of the NBA draft.

Curry said losing Thompson, a five-time All-Star who is one of the game's best shooters and has developed into a top-notch defender, was shocking.

"I mean, it's tough," Curry said. "There's no getting around that. A lot of excitement and anticipation in getting him back. It being that draft day was tough. I called it a gut punch. It was emotional for sure because you want the best for him. He deserves the best that this game has to offer.

"I know he was working hard to get back. But he'll bring that same effort, commitment and focus to this rehab. We, as his teammates, have to have his back and try to be positive and uplifting through the whole process because it's tough. There's no denying that. He's young. He's got a lot of amazing years left. We believe that, truly and fully. I know he does."

Warriors coach Steve Kerr, who traveled to Los Angeles to be by Thompson's side when he received the results of the MRI, called it a "cruel twist of fate."

The 30-year-old shooting guard was a rock for the Warriors. Kerr had often referred to Thompson as "a machine" because of his even-keeled personality, dependability on the court, unwavering love for the game and remarkable ability to remain healthy. Before 2019-2020, the eight-year veteran had never missed more than nine games in a season.

The Warriors have tried their best to fill that hole.

They fortified their roster around Curry and three-time All-Star Draymond Green by signing Kelly Oubre Jr. and Kent Bazemore.

"We did get the disabled player exception, [but] that didn't land until Monday [and] most of free agency seemed to be done by then," said Bob Myers, the Warriors general manager and President of Basketball Operations. "We did the best we could with the circumstances that we found ourselves in."

The Warriors went from winning three championships over five-straight appearances in The Finals from 2015-2019, to having the worst record in the NBA last season (15-50) without Thomspon and Curry, who only appeared in five games after sustaining a broken left hand last November.

"I'm confident on where my body is and how I've approached these last eight months," Curry said. "I've put a lot of work in and been thoughtful around how to pace myself over the course of that time."

Kerr said the Warriors need to be judicious with Curry, who, at 32, is the oldest player on the roster.

"I would love to keep his minutes down at the 34 (per game) range," Kerr said. "We know that's the best thing for him and for us long-term. That's going to be the goal. Feel free to take shots at me when we have a triple-overtime game, and I leave him out there for 51 minutes."

The Warriors have another unique challenge heading into this season.

They haven't played for nine months.

Golden State ended its season March 11, when the league was suspended because of the COVID-19 pandemic. Meanwhile, 22 teams went to the NBA Bubble near Orlando in July for a resumed season that included the Lakers and Miami Heat playing in the NBA Finals through Oct. 11.

"We're always going to think whatever it is, it's an advantage," Curry said. "It's a mindset. It's a mindset you gotta have. I think the rest was nice, knowing the guys -- myself, Loon [Kevon Looney], Draymond -- have been through years and years of Finals runs or whatnot. So you have to have that kind of mindset."

The Warriors open their season Dec. 22 against Kevin Durant and the Brooklyn Nets, an intriguing matchup highlighted by the fact that Durant hasn't played since he suffered a torn left Achilles' tendon while with the Warriors in Game 5 of the 2019 NBA Finals.

"It's exciting man," Curry said. "Throw us right into the familiarity, obviously with K, and also just teams that are expected to be at the top of each conference, or of the Eastern Conference, and kind of get a good gauge of where we are right out the gate."

There has been a lot of chatter about that.

Following Thompson's injury, the Warriors went from being thought of as title contenders to underdogs.

But Curry said none of that matters to him.

"I hear it," he said. "It doesn't sink home at all. It is what it is. I didn't get big-headed when they picked us first in the league, won't get overwhelmed wherever they have us coming into this season.

"I hope that maybe some of the young guys and the new guys who have a lot to prove in this league take it as a slight and chip on their shoulder, and we all kind of rally around that."

Defense Optional
The new-look Nets are watching their "Big 3" score at-will – but will a lack of defense keep them from their full potential?
4 hours ago

Why Pop and Kerr Spoke Out
Gregg Popovich and Steve Kerr aren't afraid to discuss social justice. Melissa Rohlin explains their desire to speak up.
6 hours ago

'Club Shay Shay' Welcomes Rick Ross
"The Boss" Rick Ross stopped by "Club Shay Shay" to talk about the Miami Heat, his resemblance to James Harden and more.
1 day ago
those were the latest stories
Want to see more?
View All Stories
Fox Sports™ and © 2021 Fox Media LLC and Fox Sports Interactive Media, LLC. All rights reserved. Use of this website (including any and all parts and components) constitutes your acceptance of these Terms of Use and Updated Privacy Policy. Advertising Choices. Do Not Sell my Personal Info