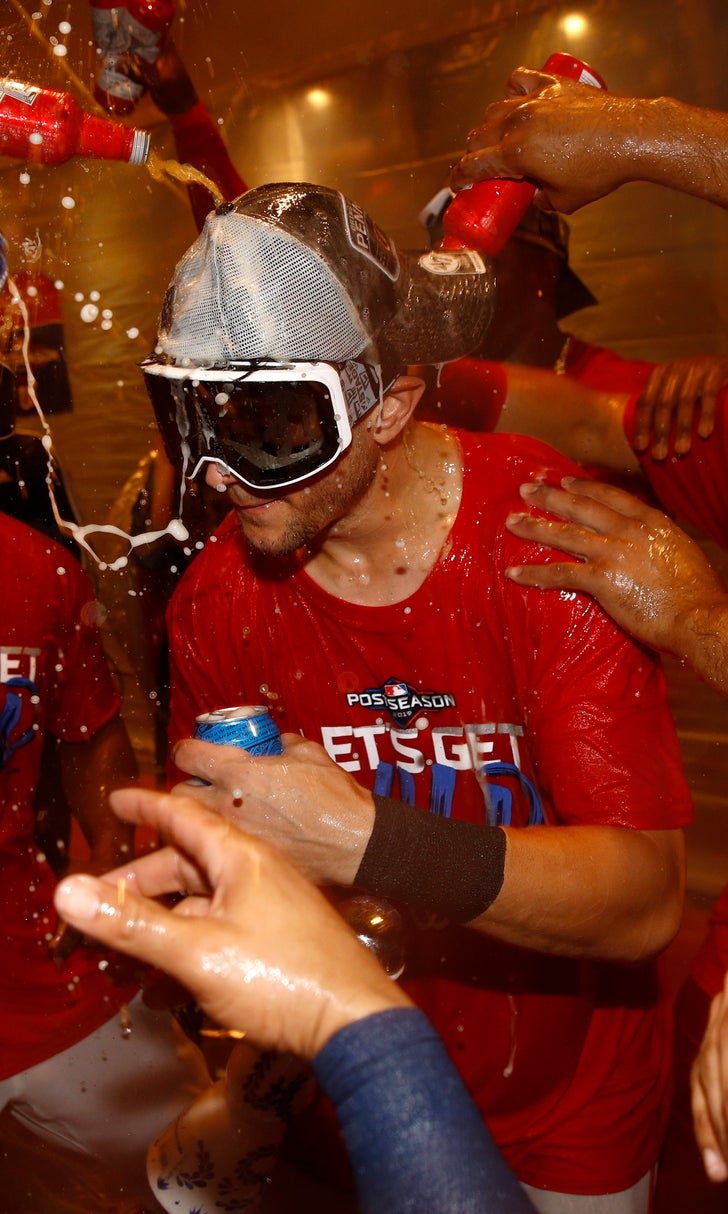 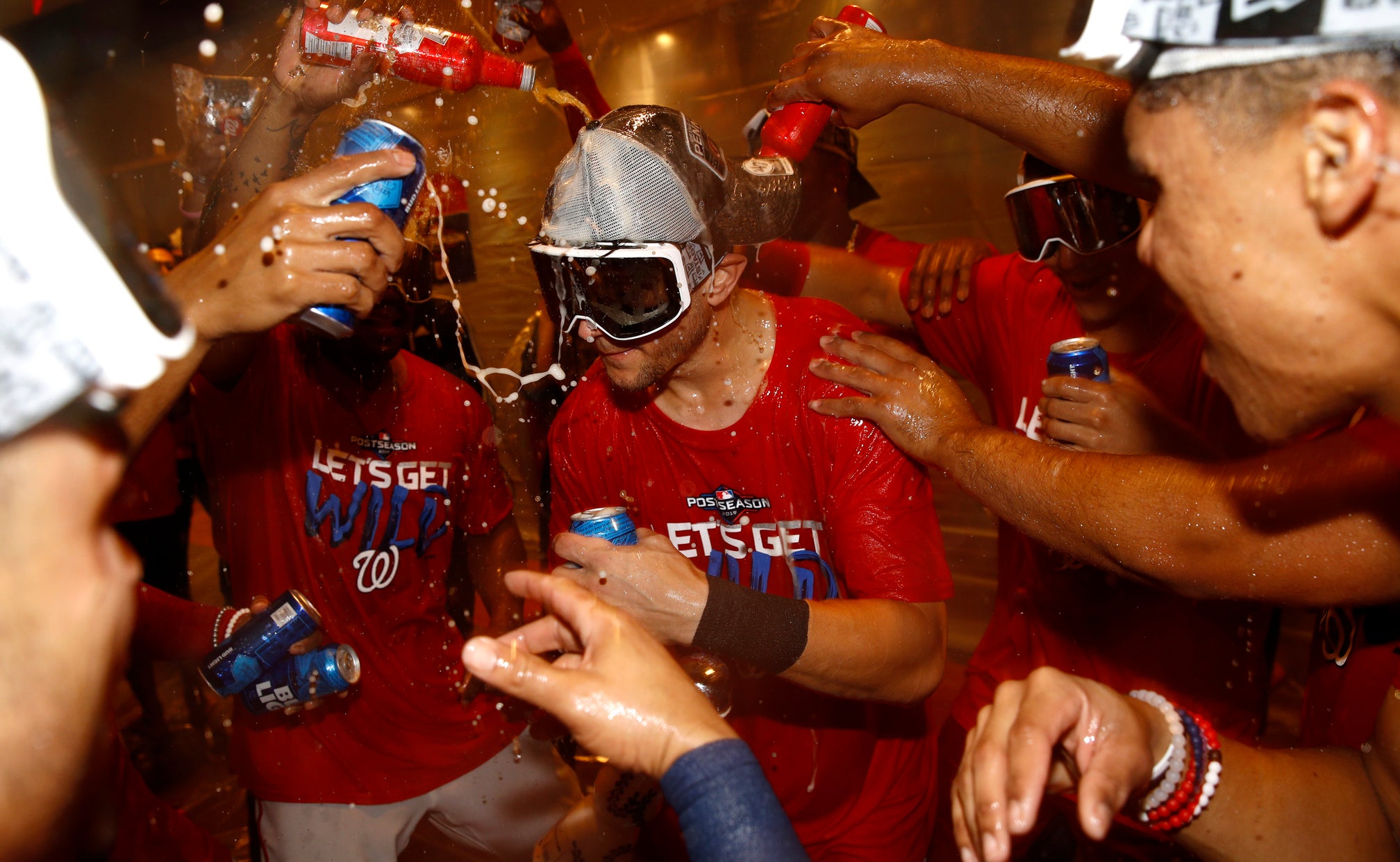 WASHINGTON (AP) — Trea Turner's go-ahead grand slam lifted Washington to a 6-5 victory over the Philadelphia Phillies for a doubleheader sweep Tuesday that helped the Nationals clinch an NL wild card, capping quite a turnaround for a team that was 19-31 in late May.

Turner had three hits in the day's first game, a 4-1 win for the Nationals. Washington assured itself of returning to the playoffs for the fifth time in eight years after sitting out October in 2018.

In the nightcap, Washington trailed 4-2 entering the sixth, because Brad Miller managed to hit two homers off Max Scherzer (11-7).

Washington loaded the bases in the sixth against Aaron Nola (12-7) with two walks and a single, setting the stage for Turner's 18th homer of the season and second career slam, which came off Jared Hughes.

PHOENIX (AP) — Ildemaro Vargas had a game-tying pinch-hit homer in the ninth inning and then singled with the bases loaded in the 19th at 1:34 a.m. local time to lift Arizona past St. Louis.

Carson Kelly and Nick Ahmed started the final rally with back-to-back singles off John Brebbia (3-4), who was the Cardinals' 11th pitcher of the night. Jarrod Dyson and Robbie Ray — a pitcher who had to pinch hit — struck out before Christian Walker was intentionally walked to load the bases.

Then it was Vargas' turn to be the hero again, smacking a single — his fourth hit of the game — through the left side of the infield. He raised his hands as players rushed the field to celebrate.

The game last 6 hours and 53 minutes and featured 24 pitchers and 48 strikeouts, with both teams plowing through bullpen arms thanks to September's expanded rosters. The Diamondbacks used a franchise-record 30 players. It was the longest game by innings and time in Chase Field history.

Kevin Ginkel (3-0) pitched a scoreless inning for the win.

St. Louis had its lead in the NL Central cut to 2 1/2 games over Milwaukee. The Cardinals have four games remaining, while the Brewers have five.

CINCINNATI (AP) — Ryan Braun added to his record total of homers at Great American Ball Park, and Milwaukee moved a step closer to a wild-card berth with its fifth win in a row.

Just like last season, when Milwaukee put on a late rush to take the NL Central title, the Brewers have closed in on a playoff spot with a September flourish. They've won 16 of 18, positioning themselves for one of the NL wild cards along with Washington. They can clinch Wednesday with a win or losses by the Cubs and Mets.

Braun connected for his 21st homer off Sonny Gray (11-8), making the final start of his All-Star season. Braun's 27 homers at Great American are the most by a visiting player.

Brent Suter (4-0) allowed three hits in three relief innings. Josh Hader allowed a pair of hits in the ninth before fanning Kyle Farmer for his 36th save in 42 chances.

PITTSBURGH (AP) — Freefalling Chicago committed five errors, including two in a seven-run seventh inning, and moved to the brink of elimination with its seventh straight loss.

Chicago dropped to 82-75 and would be eliminated with one more loss or Milwaukee win. The Cubs have not missed the playoffs since 2014.

Aided by a fielding error by second baseman Ben Zobrist and errant throw by reliever Danny Hultzen, the Pirates sent 13 batters to the plate in the seventh as they chased starter Kyle Hendricks (11-10) and erased a 1-0 deficit. Pittsburgh stopped a nine-game losing streak in which it had been outscored 87-26.

NEW YORK (AP) — Three outs from postseason elimination, New York tied it 4-all in the ninth when Michael Conforto clocked his second two-run homer of the game, connecting off José Ureña for his 33rd long ball of the season. Brandon Nimmo won it by working a bases-loaded walk in the 11th against rookie Jeff Brigham.

After wins by Washington and Milwaukee earlier in the day, the Mets needed a victory to stay in the playoff race. They are tied with the plummeting Chicago Cubs, five games behind the Brewers for the second NL wild card with five to play.

Conforto drew a leadoff walk from Adam Conley (2-10) in the 11th, and Brigham hit Amed Rosario with a 97 mph fastball. A wild pitch advanced both runners before Todd Frazier was intentionally walked. One out later, Nimmo walked on a 3-1 pitch to force in the winning run.

Paul Sewald (1-1), the seventh Mets pitcher, struck out two in a perfect inning for his first major league win in his 119th appearance.

Odorizzi (15-7) pitched two-hit ball through six innings but was pulled with a tight left hamstring after warming up for the seventh. He later said he had a cramp and expected to be fine.

The Twins improved to 97-60, their most victories since going 98-64 in 1970. Minnesota's magic number to clinch the division is two over Cleveland. Taylor Rogers pitched a perfect ninth for his 29th save.

Detroit (46-110) reached 110 losses for the second time, 16 years after setting the AL record of 119. With one more loss or a win by Baltimore, the club would be assured the No. 1 pick in next year's amateur draft.

Spencer Turnbull (3-16) allowed two runs — both scoring after he left the game — on six hits and two walks in six-plus innings.

Choi homered off Cory Gearrin (1-3) after Pete Fairbanks (2-3) struck out Brett Gardner with a runner on second and two outs in the top half.

Tampa Bay remained a half-game ahead of Cleveland for the second AL wild card.

Sabathia, a 39-year-old left-hander who is retiring at the end of the season, had made 560 regular season starts but is being moved to the bullpen along with J.A. Happ ahead of the postseason.

CHICAGO (AP) — José Ramírez hit a grand slam and a three-run homer in his first two plate appearances after missing a month with a broken hand, and Cleveland pounded Chicago.

Roberto Pérez and Óscar Mercado also went deep for the Indians, who won for the sixth time in seven games to remain a half-game back of Tampa Bay for the second AL wild card.

Mike Clevinger (13-3) pitched seven innings of five-hit ball and struck out 10 while extending his scoreless streak to 18 innings.

The switch-hitting Ramírez homered from both sides for the fourth time. He finished with a career-best seven RBIs. Batting left-handed, Ramírez drove a 3-1 pitch from Carson Fulmer (1-2) into the right-field stands with two outs in the first inning for his second career grand slam.

Cole (19-5) is unbeaten in 21 starts since losing to the Chicago White Sox on May 22. He is on the longest streak of consecutive winning decisions since Toronto's Roy Halladay was 15-0 during an 18-start span in 2003. Cole set an Astros season record with 316 strikeouts, three more than J.R. Richard's total in 1979, and established a team record with his eighth straight game of double-digit strikeouts.

Ryan Pressley and Roberto Osuna finished a four-hitter, the Astros' 12th shutout this season. Osuna worked around a leadoff single for his 37th save in 43 chances.

Alex Bregman hit his 40th homer, a fourth-inning drive off Tommy Milone (4-10). Aledmys Diaz had an RBI double in the seventh and scored when Josh Reddick grounded into a forceout.

Muncy's 34th home run was a moon shot to right field on the first pitch by Gerardo Reyes with two outs in the fourth. Reyes came on after rookie Ronald Bolaños (0-2) walked Will Smith, allowed a single to reliever Tony Gonsolin and walked Joc Pederson.

Gonsolin (4-2) pitched two perfect innings in relief of Rich Hill, with three strikeouts. Kenley Jansen worked the ninth for his 31st save.

ANAHEIM, Calif. (AP) — Homer Bailey lost for the first time in eight starts and Oakland suffered a setback in its postseason pursuit. The A's let their lead for the top AL wild card drop to a half-game over Tampa Bay and one game over Cleveland. Their magic number to clinch a playoff spot remained at five with five games left.

Khris Davis hit his 23rd homer of the season, but the A's lost consecutive games for the first time since Aug. 31-Sept. 1. Bailey (13-9) allowed three runs and eight hits in five innings.

SAN FRANCISCO (AP) — Colorado and San Francisco combined to use a major league-record 25 pitchers, and Charlie Blackmon hit a three-run homer in the 16th inning to end it. The game lasted 5 hours, 31 minutes, with Giants manager Bruce Bochy making 12 pitching changes — hardly taking it easy in his final week on the job.

Blackmon's first hit of the night came in his eighth plate appearance and off Dereck Rodriguez (6-10) for his 31st home run. Both clubs left the bases loaded in the 11th, and Colorado stranded 15 baserunners.

Sam Howard (2-0) pitched the final two innings for the win.

ARLINGTON, Texas (AP) — Eduardo Rodriguez labored through five innings to get his 19th win, allowing more runs than he had in his previous seven starts combined, and Boston beat Texas. Rodriguez (19-6) exited with a 12-7 lead after throwing 113 pitches.

Boston (82-75) clinched a winning record while the Rangers (75-82), who opened their final homestand before moving into a new stadium next year, will have their third straight losing season. Brandon Workman, the fourth Boston reliever, worked the ninth for his 16th save in 22 chances.

KANSAS CITY, Mo. (AP) — In Kansas City's first game after manager Ned Yost announced he will retire after the season, the lowly Royals burst to a six-run lead in the first three innings and beat NL East champion Atlanta behind three hits and two RBIs from Nicky Lopez.

With one more victory or a loss by Detroit, the Orioles (51-106) can avoid having baseball's worst record for the second straight season. Right-hander Dylan Bundy (7-14) allowed two runs and three hits in seven innings to win for the first time since Aug. 25.

Scheduled to make his fourth big league appearance, Blue Jays rookie left-hander Anthony Kay was scratched because of back soreness about two hours before the game and replaced by lefty Thomas Pannone (3-6). He allowed three runs in the first inning.