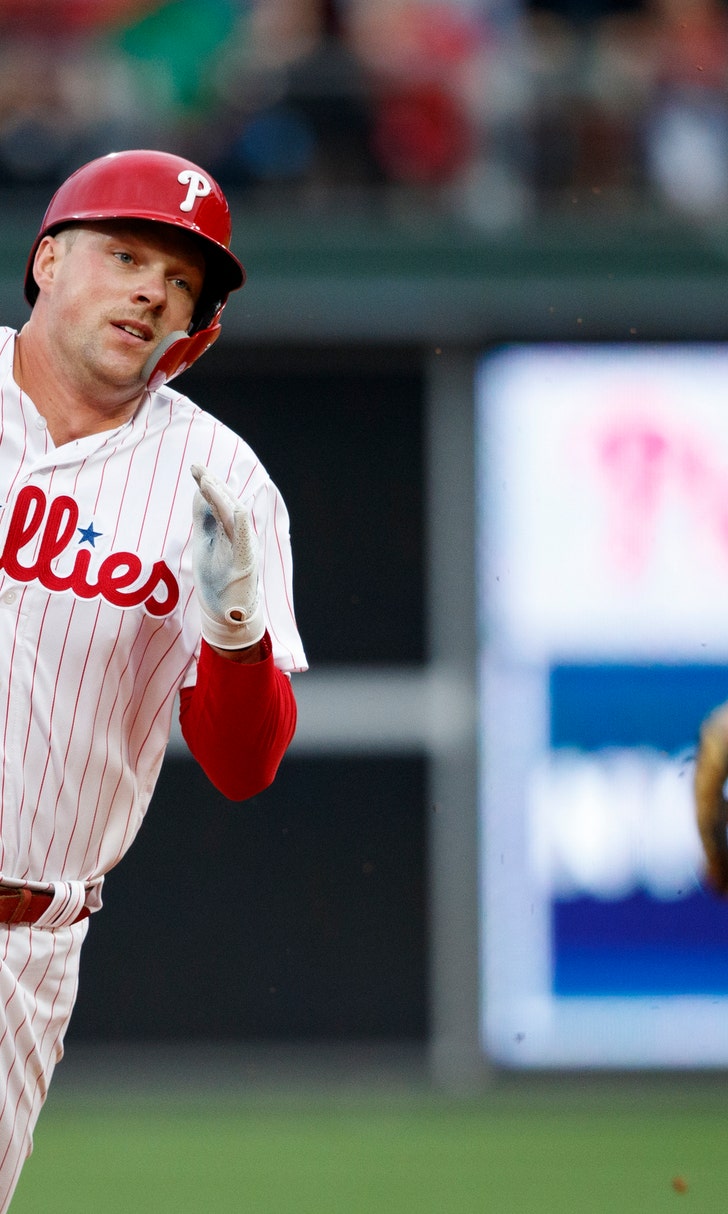 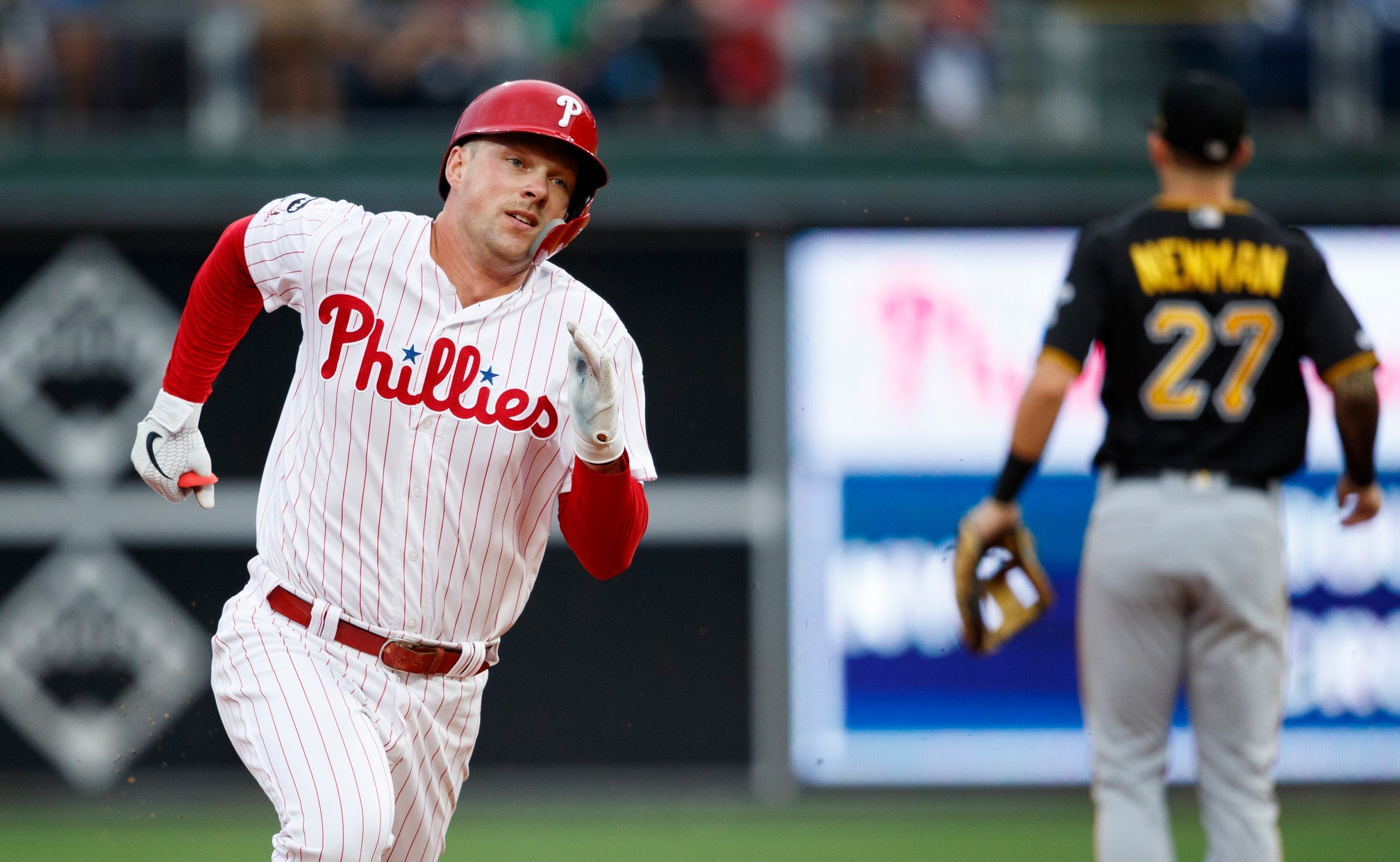 PHILADELPHIA (AP) — J.T. Realmuto had three hits, including a homer and a triple, Corey Dickerson also went deep and the Philadelphia Phillies got 17 hits in a 12-3 victory over the Pittsburgh Pirates on Wednesday night.

Every position player who started for the Phillies had at least one hit and RBI.

Starling Marte homered and had three hits for Pittsburgh, and Josh Bell hit a two-run shot.

Pirates rookie Bryan Reynolds, who began the day leading the NL in batting, went 0 for 3 to snap his seven-game hitting streak and drop his average to .330.

Mitch Keller (1-3), a 23-year-old rookie making his seventh career start, pitched into the fifth for Pittsburgh and gave up eight runs on 11 hits with eight strikeouts and a walk.

Sanchez hit a towering two-run homer in the first. Ford snapped a 2-2 tie with his sixth home run in the past 14 games, and Judge broke the game open with a two-run shot as part of New York's four-run fifth inning. LeMahieu added his 23rd of the season in the ninth.

James Paxton (11-6) gave up just one hit but was done after five innings due to control problems. Paxton issued a season-high five walks.

Seattle had just one hit until Tom Murphy doubled in the ninth.

It's the third-longest streak in franchise history. Boston's best run was 22 straight games with a homer in 2016.

The heart of the order powered the Red Sox as they finished a two-game sweep of Colorado. Rafael Devers, Bogaerts and J.D. Martinez went a combined 8 for 14 with four home runs. Bogaerts had a two-run homer in the fifth inning and a solo shot in the seventh. Martinez got things rolling with a two-run drive in the third, and Devers went deep in the ninth.

Brandon Workman struck out the side for his ninth save.

Hiura hit a solo home run in the fourth, sending a 3-0 fastball from Flaherty into the left-field seats. Hiura added an RBI double in the eighth.

Lyles (9-8) struck out five of the first seven Cardinals he faced. He fanned nine in 5 1/3 innings. Josh Hader struck out three in two scoreless innings to earn his 26th save.

Jack Flaherty (8-7) allowed five hits and three runs, two earned, in six innings. He struck out seven, walked one and took the loss.

SAN DIEGO (AP) — Kiké Hernández scored the tiebreaking run on shortstop Luis Urias' throwing error with two outs in the 10th inning and Los Angeles beat San Diego after Kenley Jansen blew his seventh save on a wild pitch in the ninth.

The Dodgers' magic number for clinching their seventh straight NL West title is down to nine. They took two of three from the Padres after losing two of three to the New York Yankees at Dodger Stadium last weekend.

Kirby Yates (0-5) got two outs in the 10th before walking Hernández, who stole second. Urias made a tough, short-hop pickup of a ball hit sharply by Russell Martin, but then overthrew first base for an error that allowed Hernández to score. A.J. Pollock added an RBI single.

The Dodgers took a 4-3 lead into the ninth and Jansen (4-3) was trying for his 28th save. But he allowed Francisco Mejia's leadoff double to left field that fell just in front of a sliding Chris Taylor. Mejia advanced on Urias' flyout to right and scored on Jansen's wild pitch.

Casey Sadler pitched the 10th for his first major league save.

Cleveland is 14-1 against the last-place Tigers this year, and that's a big reason the Indians are firmly in the postseason hunt.

Aaron Civale (2-3) allowed two runs and six hits in seven innings, striking out five and walking none. Brad Hand finished for his 32nd save in 37 chances.

Detroit starter Jordan Zimmermann allowed two runs in six innings, but Buck Farmer (5-5) allowed Lindor's one-out solo shot in the eighth, which bounced of the top of the wall and over in center field. That gave the Indians a 3-2 lead.

Ronald Acuña Jr. added a two-run double as the NL East-leading Braves snapped a two-game losing streak and won for the ninth time in 11 games.

Toronto's Brandon Drury hit an RBI groundout off Braves right-hander Mike Foltynewicz in the fourth and a second run scored on a passed ball. Randal Grichuk hit an RBI double in the fifth and Vladimir Guerrero Jr. made it a one-run game with a two-out RBI single off Jackson in the sixth.

Jacob Waguespack (4-2) lost for the first time since July 26 against Tampa Bay, ending a five-start unbeaten streak. The rookie allowed five runs, three earned, and six hits in three innings, his shortest start of the season.

NEW YORK (AP) — Kyle Schwarber hit one of Chicago's three homers against a stunned Noah Syndergaard, and the Cubs built an early nine-run lead before closer Craig Kimbrel held off New York in the ninth.

Nicholas Castellanos and Ian Happ also took Syndergaard (9-7) deep in the worst start of the 2016 All-Star's career. Syndergaard allowed 10 runs and three homers — both his most in the majors — and was pulled after three miserable innings.

Kimbrel entered with a three-run lead and let his first two batters reach in the ninth. He escaped a dicey 3-0 count against red-hot Amed Rosario with a fielder's choice, struck out Juan Lagares and got Todd Frazier to fly out for his 12th save.

Chicago climbed within two games of the NL Central-leading Cardinals, who lost 4-1 to the Brewers.

New York has dropped five straight, all at home.

Tim Hill (2-0) tossed two perfect innings in relief of Jakob Junis for the Royals, and Ian Kennedy survived a harrowing ninth inning to pick up his 23rd save.

Blake Treinen (6-5) faced four batters in the seventh inning without recording an out for Oakland. He allowed three hits and a walk, and Jake Diekman allowed one of his inherited runners to score.

Marcus Semien and Mark Canha homered for the A's.

Eugenio Suarez hit his 38th homer, connecting in the fourth straight game for the Reds.

Aquino hit a three-run shot in the first. The 24-year-old outfielder matched the NL homer mark for rookies in a month set by Cody Bellinger of the Dodgers in June 2017.

The major league rookie record for homers in a month is 18 by Rudy York of Detroit in August 1937. Aquino, who got one at-bat in the majors last year, also doubled as the Reds beat Miami for the third straight day.

DeSclafani (9-7) had his longest outing of the season, throwing seven innings of two-hit ball. He struck out eight and walked one.

Sandy Alcantara (4-12) gave up four runs and six hits, struck out eight and walked one in six innings.

The Nationals scored five runs on five hits in the first inning against Asher Wojciechowski (2-7).

Chance Sisco and Chris Davis homered for the Orioles, who settled for a split of the four-game season series.

HOUSTON (AP) — George Springer broke a tie with a bloop RBI single in a three-run seventh inning and Houston rallied to beat Tampa Bay and extend its winning streak to six.

Alex Bregman had three hits and an RBI and Yuli Gurriel hit a two-run homer for Houston.

Gerrit Cole allowed six hits and four runs in 6 1/3 innings, but did not factor into the decision. He struck out 14 to tie a season high. Will Harris (4-1) struck out three in 1 1/3 scoreless innings for the win.

It was the 13th multihomer game of Schoop's career and fifth this year.

José Abreu and Matt Skole each drove a run for Chicago.

Nick Solak had an RBI single in the sixth and Isiah Kiner-Falefa added a two-run double in the eighth as the Rangers won the season series 10-9 over their fellow AL West also-rans. Texas took four of six from the Angels in two series over the past 10 days.

After opener Emmanuel Clase barely escaped a bases-loaded jam in the first inning, Jurado (7-10) retired 16 of his first 18 batters, giving up only two hits to Kole Calhoun. José Leclerc pitched the ninth for his ninth save, his first since Aug. 11.

Max Scherzer
share story
those were the latest stories
Want to see more?
View All Stories
Fox Sports™ and © 2020 Fox Media LLC and Fox Sports Interactive Media, LLC. All rights reserved. Use of this website (including any and all parts and components) constitutes your acceptance of these Terms of Use and Updated Privacy Policy. Advertising Choices. Do Not Sell my Personal Info