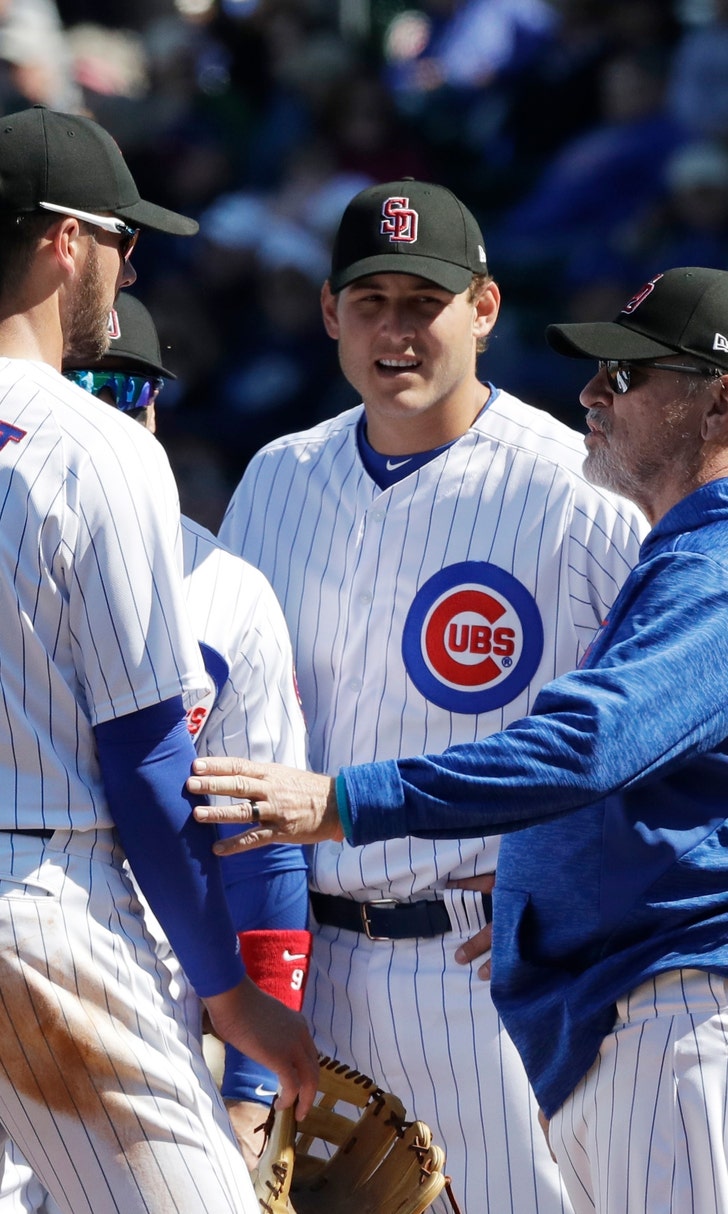 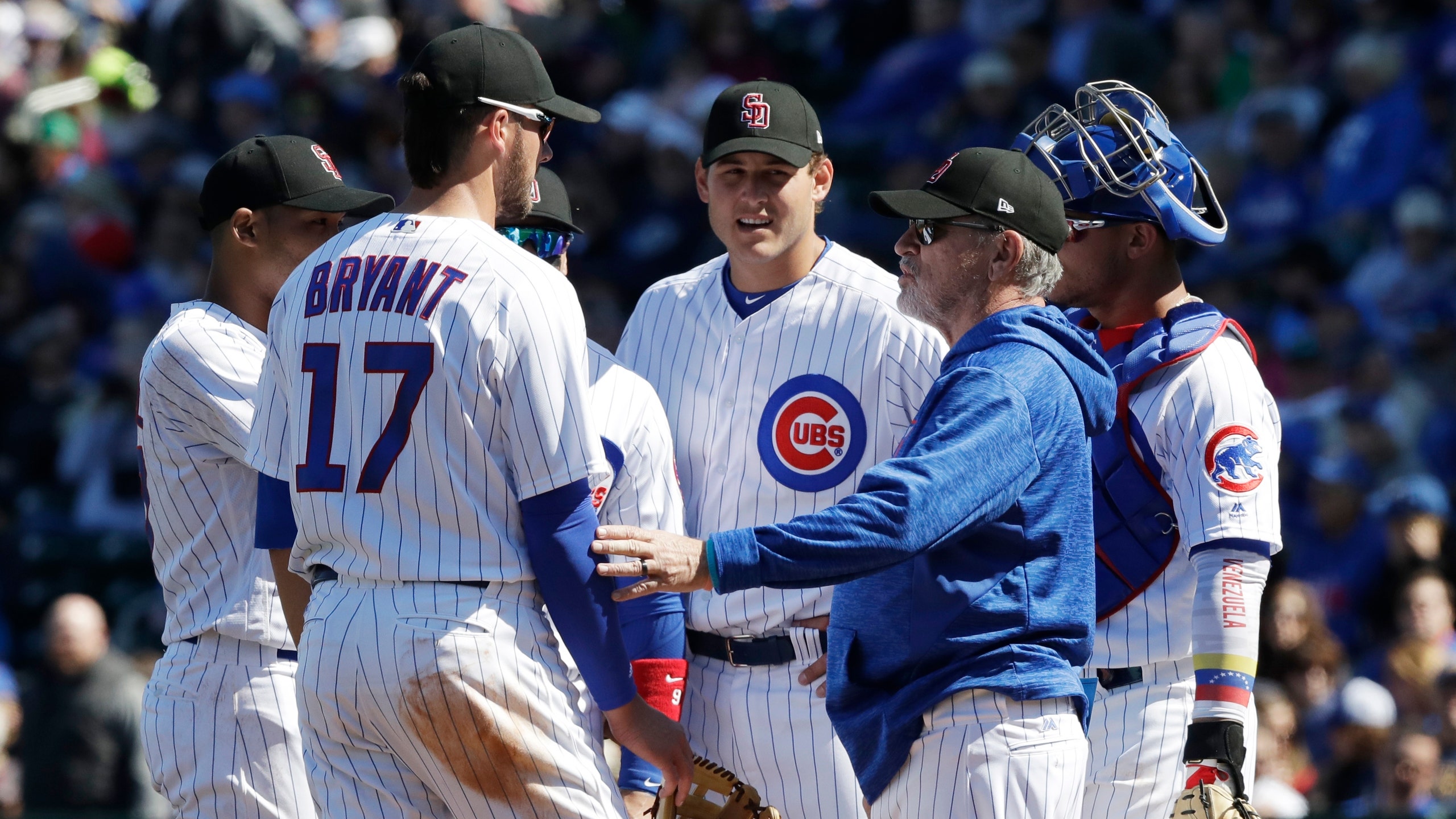 Managers, coaches adjust to get most out of millennials

MESA, Ariz. (AP) — In the aftermath of Chicago's collapse last season, Cubs manager Joe Maddon went looking for a deeper understanding of the players who dominate the major leagues these days.

Maddon's search took him to "Managing Millennials for Dummies," and the book reinforced what he already felt about the people he worked with every day.

"The big takeaway is that they're no different than anybody else," a chuckling Maddon said. "When you break it down and you go back to your own childhood we all had inefficiencies as young people. The biggest takeaway I think are two things; that the propensity to be inclined to utilize technology, which is wonderful because I've done that anyway, and then, they as a group like wanting to know why."

Millennials make up the vast majority of the majors today, and their influence is felt all over the sport.

They were the earliest adopters of the advanced statistics that have become commonplace throughout baseball, and they inform much of what they do on the mound or at the plate. They want to know the reasoning behind what their coaches want them to do.

"I've learned this generation is nothing like the generation I grew up in," Royals manager Ned Yost said. "Nothing like it. You have to learn and have an open mind to find out what makes these kids tick, how they grew up. They're so diverse and their way of communicating is different in Southern California, kids in the South, kids in the East. It's just taking the time to get to know them and how to communicate."

The millennial generation became a hot topic in Chicago when the Cubs fired hitting coach Chili Davis after they struggled to score in the final few days of last season, culminating in their 2-1, 13-inning loss to Colorado in the NL Wild Card Game.

Davis told the Chicago Sun-Times that he needed to make some adjustments to how he delivers his message to millennials, and he planned to know more about his potential players before he accepted another job. He was hired as hitting coach for the New York Mets in December.

"You learn from every place you go," Davis said during spring training. "You know, there's a lot of different personalities to try to connect with. And sometimes you connect with most of them, you hope you connect with all of 'em — that's a rarity. But you know, I had great kids in Boston, I thought I had some really good kids over in Chicago last year and I'm really enjoying the guys I'm around this year."

Defining a generation "is an art and a science," said Kate Turkcan, who is the head of youth insights for Kantar Consulting. Turkcan said millennials were born between 1979 and 1996, and centennials — the next major generation for baseball — began in 1997 and ended between four and eight years ago.

Turkcan, who has worked with universities and companies like Samsung, Coca-Cola and Target, said the millennial stereotype of entitled young person is misguided.

"They're not asking why to be difficult. They're asking why because they've grown up in a generation or in a world where you need proof for everything, you need back up," she said.

"They're taught critical thinking skills ... they've been taught you don't take anything at face value and I think even coming from someone who's experienced, like a coach or like a manager, it's not that they're doubting, but it is that they've always been taught like you don't just take anything. You ask why. ... You want to get really to the root of the issue."

Maddon, who turned 65 on Feb. 8, is the oldest manager in baseball, followed by the 64-year-old Yost and San Francisco skipper Bruce Bochy, 63. Maddon is nearly 30 years older than Rocco Baldelli, who became the game's youngest manager when he was hired by Minnesota in October.

Despite his age, Maddon has been known for his ability to relate to his players. The Cubs declined to offer him an extension after the tough finish last year, so Maddon's ability to get the most of the younger millennials on his roster could help determine his future.

That's just fine with Maddon, who thinks his style works nicely for baseball's most important generation at the moment.

"Quite frankly, when I started doing this in the mid-80s, I thought it was important to tell my players why," Maddon said. "You want to know why, I don't feel offended. I think sometimes it's, when people ask you why there's a defensive component to that that some people don't like. I don't mind it. So when they ask me that, why, I should be prepared to tell them why."