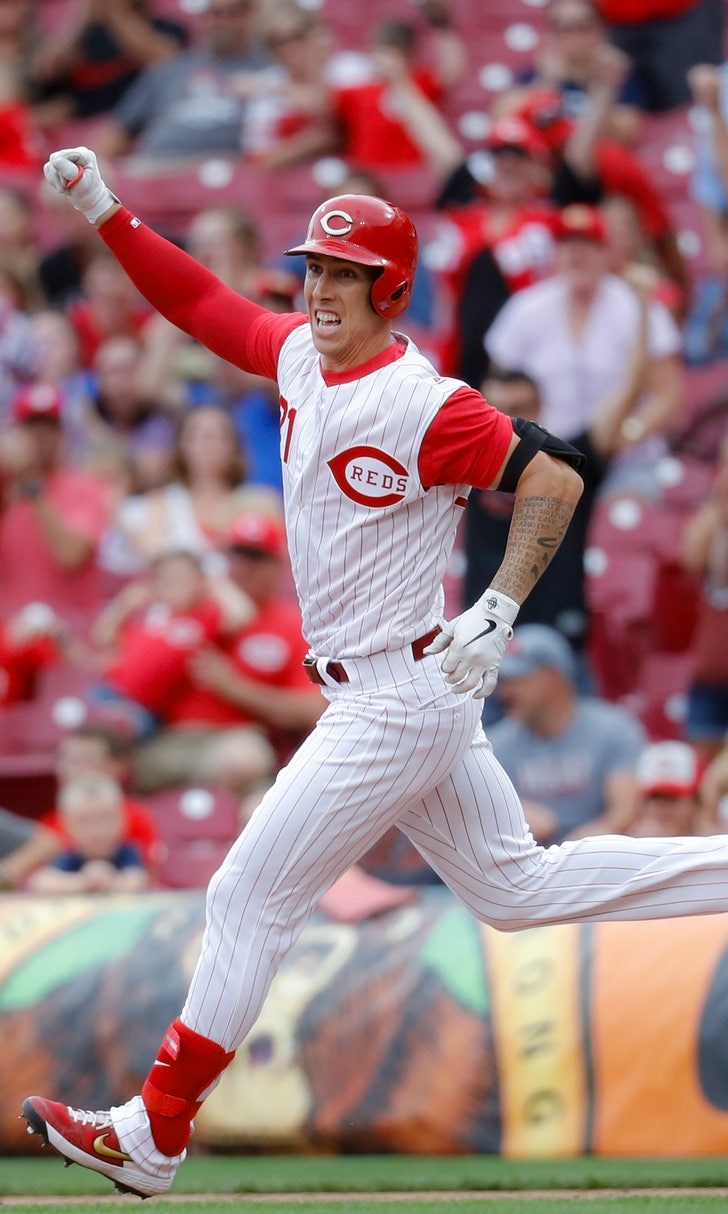 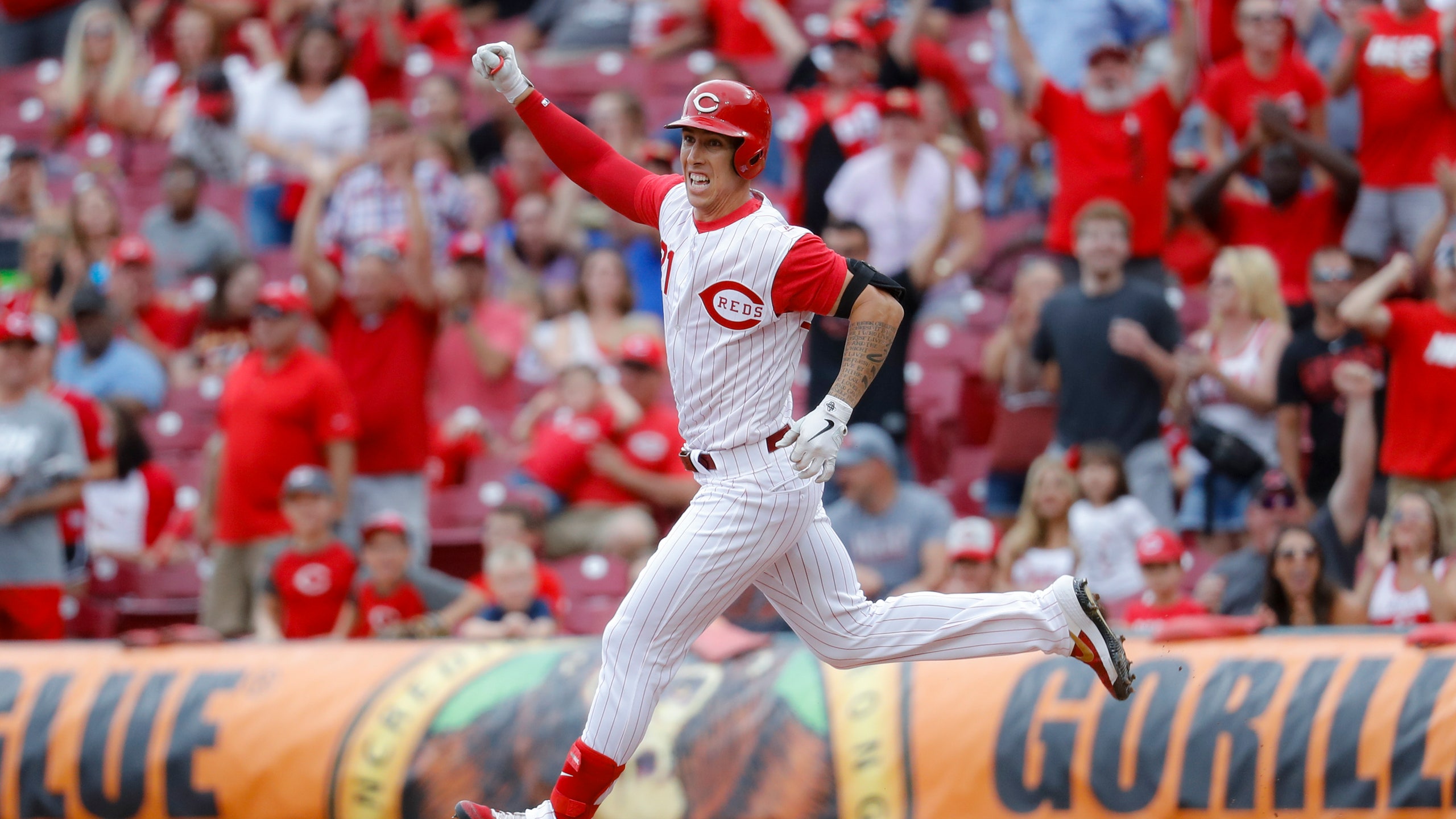 Lorenzen became the first Cincinnati pitcher with a walk-off hit since Randy Keisler in May 2005. It was Lorenzen's fifth career pinch hit and occurred four days after the reliever became the first player since Babe Ruth in 1921 to homer, play the outfield and earn a victory on the mound in the same game.

Pinch-hitter José Peraza and Phillip Ervin singled with one out off Yoan López (2-6) before Lorenzen delivered against T.J. McFarland.

Eugenio Suarez homered twice and has 44, one behind leaders Mike Trout and Pete Alonso.

Mike Clevinger (11-2) allowed two runs and four hits in 6 1/3 innings to win his 10th straight decision, and Cleveland closed within 5½ games if AL Central-leading Minnesota and remained 1½ games behind Oakland for the second wild card.

Brad Hand pitched around a walk and a hit batter in the ninth for his 34th save.

Franmil Reyes hit a two-run single in the second off Randy Dobnak (0-1). Carlos Santana homered against Devin Smeltzer in the third and Francisco Lindor went deep in the fifth for a 4-1 lead.

Austin Meadows and Avisail García homered for the Rays, who remained one game ahead of Oakland for the top AL wild card.

The Yankees won for the fourth time in five games and improved to 94-50, keeping pace with Houston for the top record in the majors.

The Yankees entered the game two homers shy of the club record of 267, set last year. Torres' two-run shot in the second was No. 266, Tauchman went deep with a man on in the fourth and Judge added the record-breaker by leading off the fifth with his 21st of the season.

Torres went 3 for 5 with four RBIs. His 35th homer moved him one ahead of Gary Sánchez for the club lead.

Jackie Bradley Jr. and Mookie Betts homered for the Red Sox, who lost for the third time in four games. Boston fell eight games behind Oakland for the second AL wild-card spot with only 19 games remaining.

Chad Green (3-4) pitched three perfect innings of relief for New York and got the victory. Rick Porcello (12-12) lasted just four innings for Boston, which used eight pitchers before it was finally over.

Manaea (1-0) allowed two hits over seven innings and has a 0.75 ERA after two starts. Yusmeiro Petit pitched around a walk in the eighth and Liam Hendriks threw a perfect ninth for his 19th save, completing a two-hitter.

Khris Davis had a two-run double for Oakland.

Detroit starter Daniel Norris (3-12) was removed after three innings for his sixth straight start, part of the Tigers' plan to limit his workload.

Flaherty won for the sixth time in eight starts and dropped his post All-Star break ERA to 0.76. Carlos Martinez worked a perfect ninth for his 19th save. St. Louis has won eight of 11 overall.

Carlos Martinez worked a perfect ninth for his 19th save as St. Louis finished the season series 14-5.

Scherzer (10-5) allowed one run and two hits in six innings with nine strikeouts. He had not gotten a decision in four starts since beating Kansas City on July 6, a span that included nearly a month on the injured list because of a bad back.

Yan Gomes homered twice, and Adam Eaton and Asdrúbal Cabrera each had three RBIs to help Washington end a four-game skid. The Nationals are nine games back of the NL East-leading Braves wbut opened a three-game lead over the Cubs for the top NL wild card.

NEW YORK (AP) — Maikel Franco, Scott Kingery and Adam Haseley homered as Philadelphia overcame a 3-0 deficit and closed within two games of Chicago for the second NL wild-card spot. The Mets stayed four back of the Cubs.

Bryce Harper drew a bases-loaded walk as a pinch-hitter, capping a three-run seventh to put the Phillies ahead 10-6. That came shortly after a sensational catch by right fielder Sean Rodríguez preserved a slim lead.

Ranger Suárez (5-1) got two outs for the win and Héctor Neris closed for his 24th save. Paul Sewald (0-1) took the loss.

MILWAUKEE (AP) — Tyler Austin drove a pinch-hit, three-run homer during the a five-run fourth against Jon Lester (12-10), and Milwaukee pulled within two games of the Cubs.

Brent Suter (1-0) gave up one hit in two scoreless innings, and Josh Hader struck out two batters for his 29th save.

Chicago's Addison Russell was hit in the face by a 94 mph fastball from Adrian Houser in the third and left in the middle of the inning. He had a bruised nose and was under evaluation for a possible concussion.

Kenta Maeda (9-8) gave up one hit and struck out six during four innings of relief, and four pitchers completed a four-hitter.

Giants manager Bruce Bochy was on the bench for the last time in a game at Dodger Stadium. He finished 107-108 in the ballpark and has the most victories of any visiting manager there.

HOUSTON (AP) — Gerrit Cole (16-5) celebrated his 29th birthday by allowing one hit with 15 strikeouts in a season-high eight innings and winning his 12th straight decision. He joined Pedro Martinez as the only pitchers in major league history with 14 or more strikeouts in three straight games. Cole leads the major league with a career-high 281 strikeouts.

Chris Devenski struck out two in a perfect ninth, finishing a series in which Houston outscored the Mariners 41-15 in a four-game sweep.

Jake Marisnick and George Springer homered, and rookie Yordan Álvarez had six RBIs and hit three of Houston's team-record 11 doubles. The Astros are 16-1 against Seattle this year, winning 11 in a row.

MIAMI (AP) — Sandy Alcantara (5-12) threw a four-hitter and became the first Marlins pitcher with two shutouts in his rookie season since Dontrelle Willis in 2003.

Playing in his 19th big league game, Solak has six RBIs against Baltimore and five against everyone else.

Texas had 20 hits off Asher Wojciechowski (2-8) and six relievers.

Mendick, Matt Skole and James McCann had two hits apiece for the White Sox, who avoided a three-game sweep.

Michael Hermosillo had two hits in the ninth spot for the Angels, who finished with five hits without the injured Mike Trout and have lost 17 of their last 22 road games.

SAN DIEGO (AP) — Wil Myers singled off Yency Almonte with one out in the 10th to drive in Manny Machado, who walked against Jesús Tinoco (0-2).

How MLB Win Totals Are Made
Predicting how many games MLB teams will win isn't as simple as plugging data into a computer. Sammy P explains it all.
February 26