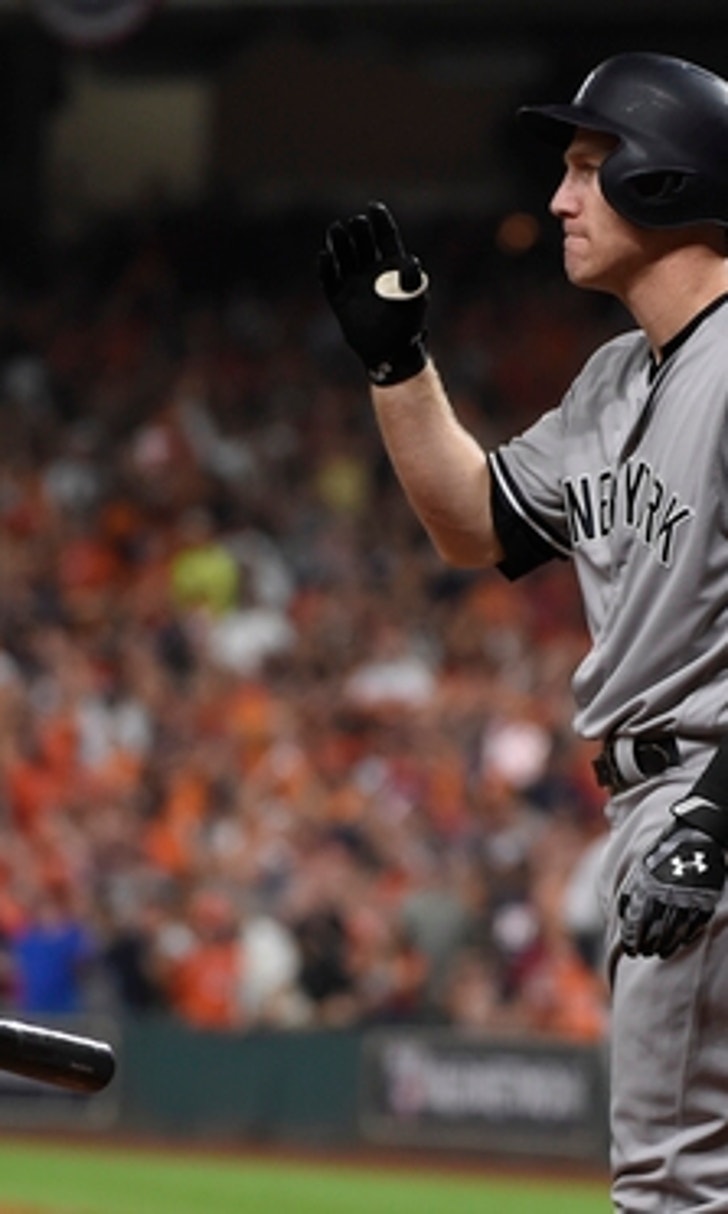 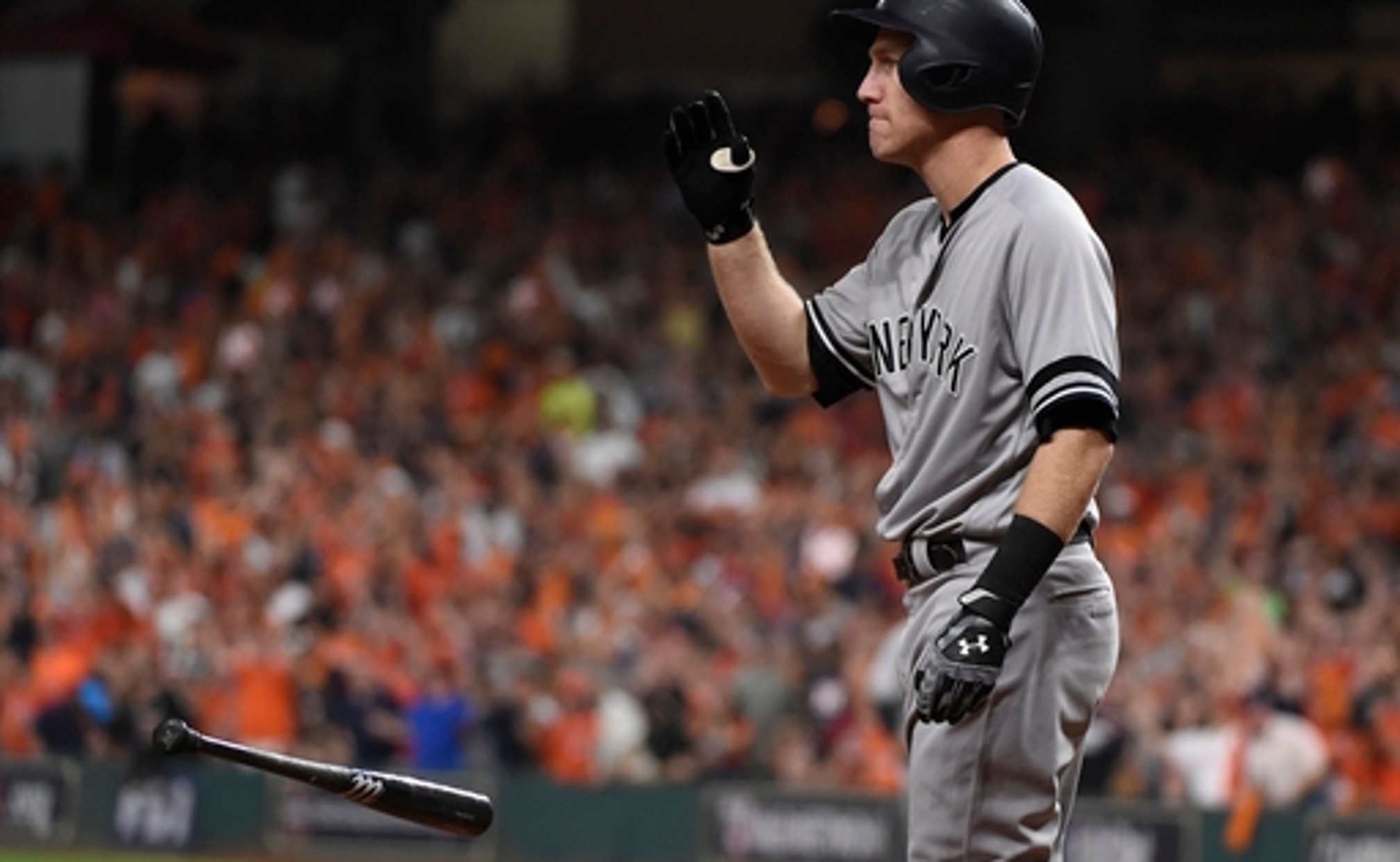 Wondering who stays and goes, Yankees turn toward 2018

NEW YORK (AP) No more chances for another comeback. That's it, the Baby Bombers are out.

After winning their first four elimination games this postseason, Aaron Judge and the New York Yankees went down swinging and were knocked out of the playoffs Saturday night with a 4-0 loss to the Houston Astros in Game 7 of the AL Championship Series.

To get that far, the Yankees rallied from a pair of 0-2 deficits against 100-win teams, beating relief ace Andrew Miller and Cy Young Award winners Corey Kluber and Dallas Keuchel along the way. But in the end, a riveting October run fell one win short of New York's first trip to the World Series since 2009.

''The closer you get, the harder it is when it's over,'' outfielder Brett Gardner said.

It was a heartbreaking finish to an encouraging season for the resurgent Yankees in their first full year of a youth movement. But with the fast rise of Judge and power-hitting partner Gary Sanchez in a dangerous lineup, this certainly looks like a team with potential to go deep for years to come - at the plate and in October.

''I'm extremely proud of this group, what they've accomplished up to this point,'' manager Joe Girardi said. ''But I think there's more. More. And that's the motivating factor.''

There are important questions to be answered, too.

Even after the wild-card Yankees easily surpassed early expectations for this season, Girardi might have an uncertain future following a decade in charge because his contract is about to expire.

Girardi came under heavy criticism for a couple of key decisions that went wrong in the Division Series against Cleveland and was booed by the New York crowd during introductions before Game 3. But he said he felt ''horrible'' that he ''screwed up'' and took full responsibility in a talk with his team. During a trying time, the Yankees rallied around their embattled skipper and fought back with three straight wins to dethrone the defending AL champions in a decisive Game 5 on the road.

''I love what I do,'' Girardi said. ''I'll sit down, talk to my wife and my kids and see where they're at and what they're thinking. And then we'll see what the Yankees are thinking.''

At age 37, left-hander CC Sabathia can become a free agent after going 14-5 with a 3.69 ERA though. Asked whether he wants to stay, he quickly replied: ''Of course.''

Right-hander Masahiro Tanaka, who had a 0.90 ERA in three playoff starts following an inconsistent season, can opt out of his contract with three years and $67 million remaining on the $155 million, seven-year deal he signed when he arrived from Japan before the 2014 campaign.

''That's a sensitive matter, so I don't want to comment on that,'' Tanaka said through a translator. ''Obviously, I will talk with my agent and move forward from there.''

Regardless of what he decides to do, the Yankees could be in the market for starting pitching this offseason to complement 23-year-old ace Luis Severino and an offense that led the majors with 241 homers, the fourth-highest total in team history. New York ranked second in runs to Houston.

Judge led the way with a rookie-record 52 homers - most in the American League - and 114 RBIs. He and Sanchez combined for 85 home runs, best in big league history by a pair of teammates 25 or younger.

''Through injuries, through ups and downs, this team always came to play every day, and that's something as a rookie, seeing the veteran guys do that and fight like they did, I had a lot of fun playing with them,'' Judge said.

''We've got a lot of guys in the minor leagues just waiting for their turn to come up here and do their thing,'' Judge said.

Young first baseman Greg Bird produced in the playoffs and certainly has pop. He's missed most of the past two seasons with injuries, so the Yankees are eager to see what he can do with a full complement of at-bats.

''We have to get ready for next year and do better next year,'' Bird said. ''We have a great group coming back. There's definitely things to be happy about there.''

Second baseman Starlin Castro, shortstop Didi Gregorius and switch-hitting outfielder Aaron Hicks are in their primes and coming off productive seasons. Gardner, Chase Headley and Jacoby Ellsbury showed they still have plenty to offer, and all three veterans remain under contract.

New York bailed out an ineffective Severino by rallying to beat Minnesota in the AL wild-card game, bringing back an October energy to a revved-up Yankee Stadium that helped New York go 6-0 at home in the playoffs. But it was a 1-6 mark on the road that did in the Yankees, who totaled three runs while dropping all four games at Houston.

With a 3-2 lead and two chances to win one game and take the series, the strikeout-prone Yankees were outscored 11-1 over the final two games of the ALCS.

Still, the experience they gained and the grit they showed throughout this exciting October bodes very well for the future.

''We're all excited for next year and what it holds for us,'' Judge said.