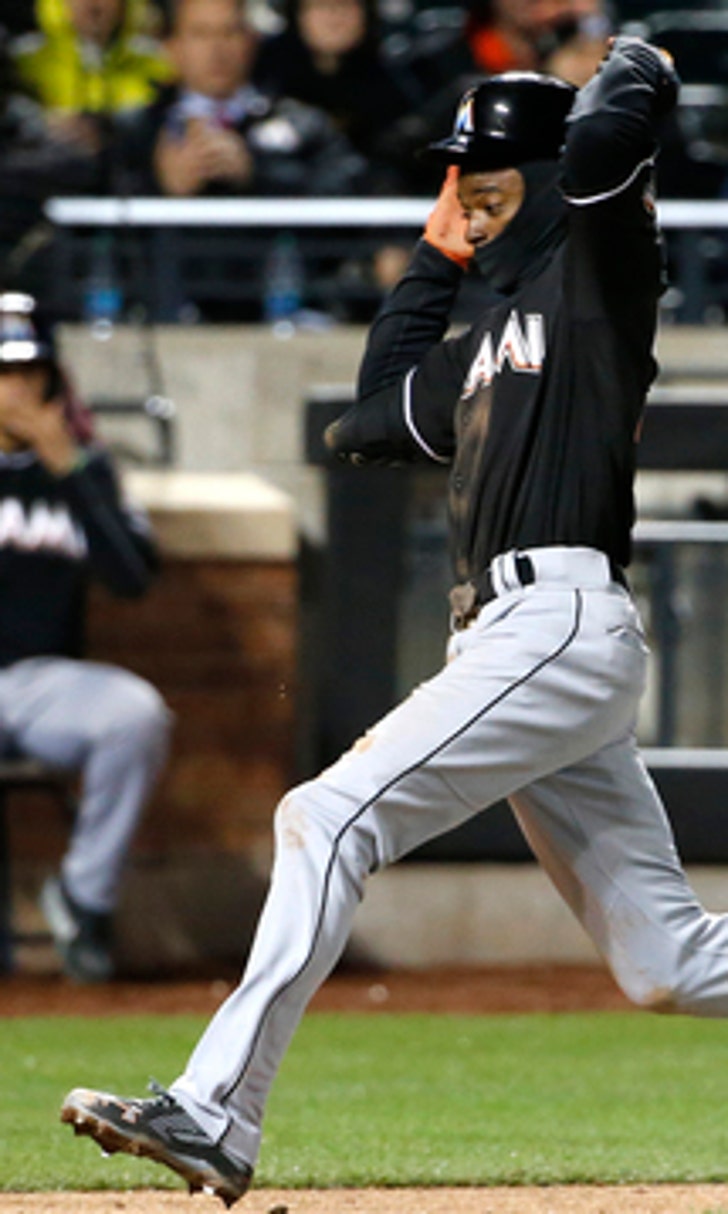 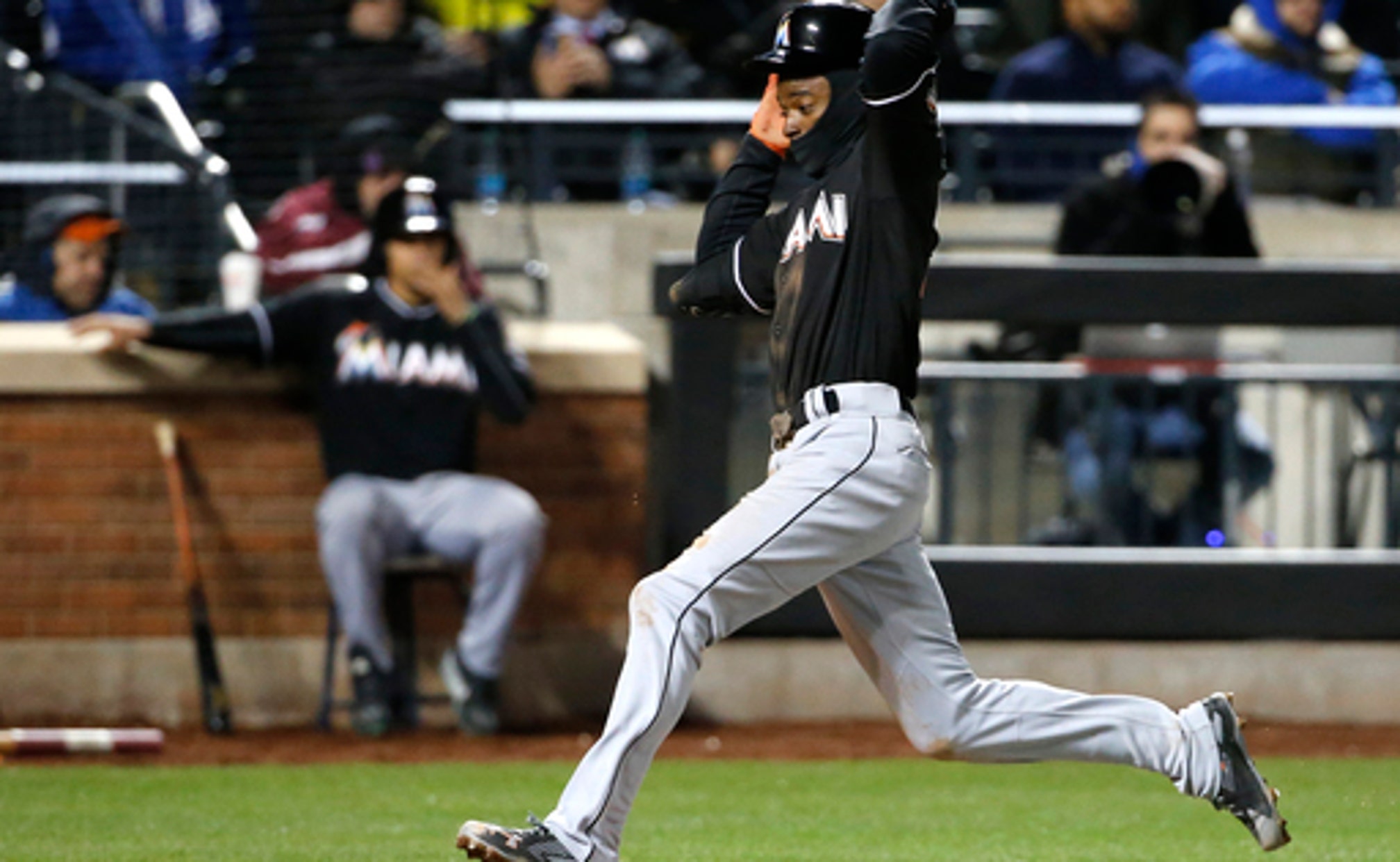 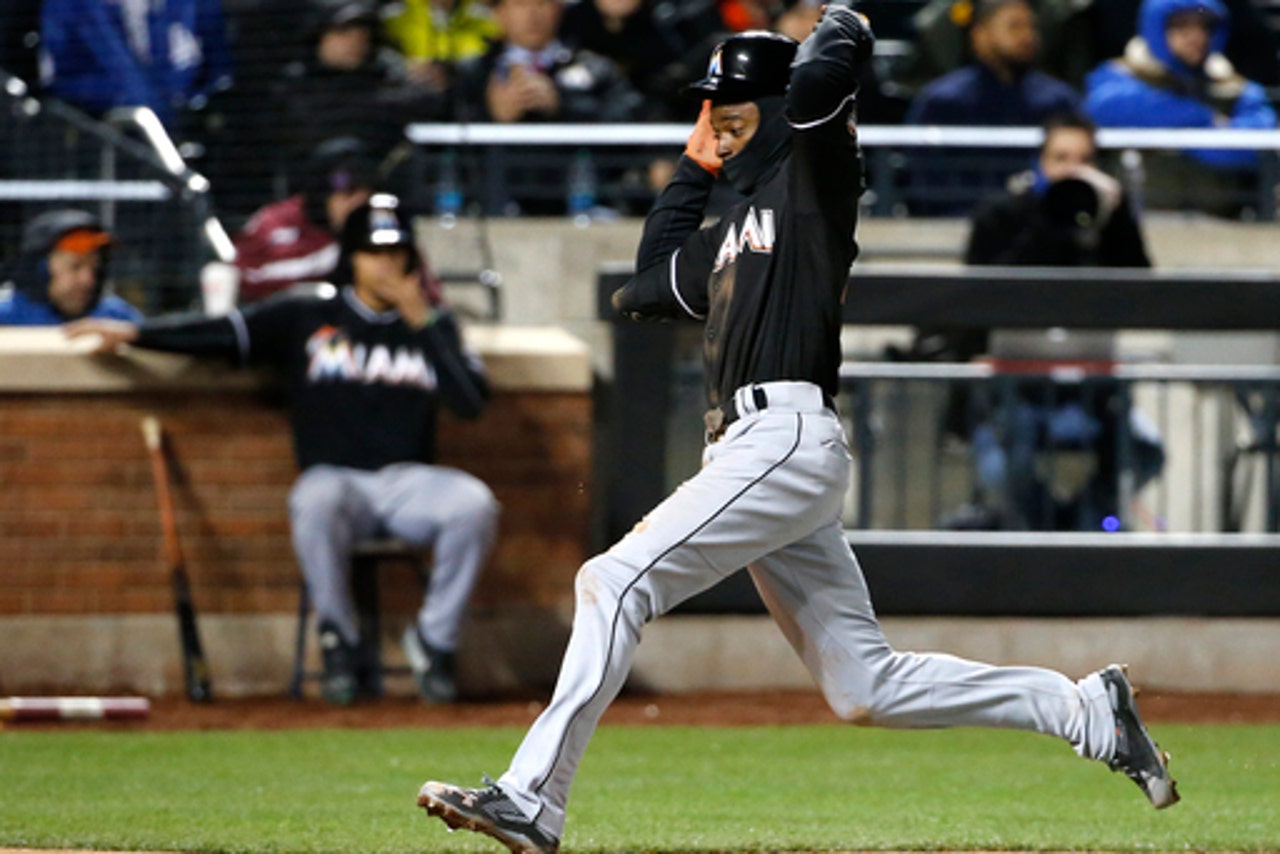 NEW YORK (AP) Dee Gordon sparked the decisive rally with a single on the 16th pitch of his gritty at-bat, ending the longest major league plate appearance in nearly two years, and the Miami Marlins edged the New York Mets 2-1 on Tuesday night to win a much-anticipated pitching matchup that mostly lived up to its billing.

Noah Syndergaard struck out 12 for the slumping Mets, one short of his career high, and left with the score tied at 1 after seven innings. Miami ace Jose Fernandez recovered from a shaky start and went five innings in a game pitting two of baseball's most electric young arms.

Derek Dietrich had an RBI single in his first start of the season for the Marlins, and pinch-hitter Martin Prado delivered a go-ahead sacrifice fly in the eighth against Jerry Blevins. Gordon, a Mets nemesis who whiffed a career-high four times, stole second base and scored the tiebreaking run after leading off with a single on the 16th pitch from Jim Henderson (0-1).

Gordon fouled off 11 consecutive 2-2 pitches in the longest plate appearance by a big league hitter since Justin Turner drew a 16-pitch walk for the Los Angeles Dodgers from Cincinnati right-hander Johnny Cueto on May 26, 2014, according to STATS LLC.

David Phelps (2-0) fanned three in two hitless innings, and A.J. Ramos got three outs for his second save.

The NL champion Mets (2-5) have dropped four straight - all at home to division foes.

Fans brought toy hammers and blond wigs to cheer on the Mets' big starter nicknamed Thor, and he didn't disappoint. Firing 99 mph fastballs with his long hair blowing in the stiff breeze, Syndergaard struck out five of his first six batters and seven through three innings.

Fernandez, on the other hand, looked antsy in the early going and threw up his arms when a check-swing call went against him. He allowed Curtis Granderson's leadoff double, which snapped a 0-for-20 slump, and was fortunate to escape the first inning down only one run after Lucas Duda was thrown out trying to stretch his RBI single.

David Wright flied out on a full-count pitch with the bases loaded to end the second, and Yoenis Cespedes' high drive was caught at the fence in the third, knocked down by wind gusting in from left field at 13-21 mph.

Facing the Mets for the first time since June 2013, Fernandez settled in and retired his last 10 batters - the final four on strikeouts. He was pulled after 90 pitches.

Dietrich hit an RBI single in the fourth, when Miami benefited from a successful replay challenge. He also doubled and tried to score from second in the seventh on an infield single by pinch-hitter Ichiro Suzuki but was thrown out at the plate.

Duda made the toss home he failed to make from first base when the Mets were trying to preserve a ninth-inning lead in Game 5 of the World Series last year against Kansas City.

It was the 2,936th major league hit for Suzuki, now 33rd on the career list after breaking a tie with Marlins batting coach Barry Bonds.

Mets RHP Jacob deGrom made it home to Florida in time to be with his wife for the birth of their first child Monday night, the team said. Jaxon Anthony deGrom checked in at 7 pounds, 12 ounces. The Mets have not placed deGrom on the paternity list because that would prevent them from being able to backdate a stint on the disabled list, if necessary. Manager Terry Collins acknowledged it's possible deGrom could land on the DL because of his sore lat muscle. ''We're trying to stay away from that,'' Collins said.

Marlins: Lefty reliever Mike Dunn felt something grab during his most recent bullpen session and will be shut down for a few days, manager Don Mattingly said. Dunn, on the disabled list with a strained left forearm, was scheduled to see Marlins medical director Dr. Lee Kaplan. ''Not great news for him,'' Mattingly said.

Mets: With the Marlins set to start a left-hander Wednesday, Collins said he was planning to play Wright even though it will be a day game after a night game. New York has a day off Thursday.

Mets: RHP Logan Verrett, scheduled to pitch in deGrom's place Wednesday, was available out of the bullpen Tuesday because New York used five relievers - three for more than one inning - to get through Monday night's 10-3 loss after starter Steven Matz was chased in the second. As insurance, RHP Rafael Montero was summoned to New York from Triple-A Las Vegas in case the Mets were to need a new starter for Wednesday. ''We're waiting to see what happens tonight first,'' Collins said before the game. ''Tomorrow we'll make a decision on whether we need to activate him.''

Timeline of Justin Turner's COVID Tests
The Dodgers third baseman left Game 6 after a positive COVID test, then returned for the celebration. Here's the latest.
9 mins ago

Scenes From LA's Celebration
The Los Angeles Dodgers are crowned World Series champions for the first time in 32 years, and the emotions were on full display.
1 hour ago

Sports World Reacts to Dodgers' Title
Twitter lit up after the Dodgers won the World Series on Tuesday night, defeating the Tampa Bay Rays in six games.
2 hours ago

Best Of Game 6 Watch Party
Nick Swisher, Tino Martinez, Rick Ankiel and Ben Verlander react to Blake Snell being pulled and the Dodgers' title win.
2 hours ago
those were the latest stories
Want to see more?
View All Stories
Fox Sports™ and © 2020 Fox Media LLC and Fox Sports Interactive Media, LLC. All rights reserved. Use of this website (including any and all parts and components) constitutes your acceptance of these Terms of Use and Updated Privacy Policy. Advertising Choices. Do Not Sell my Personal Info