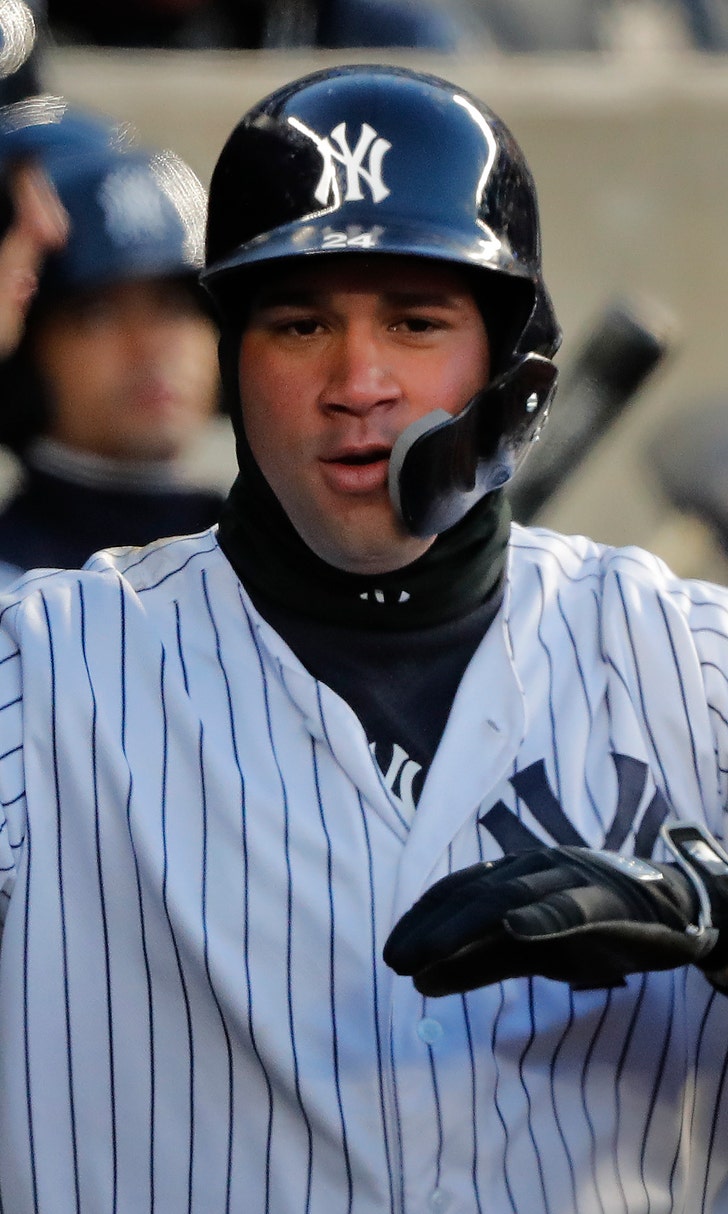 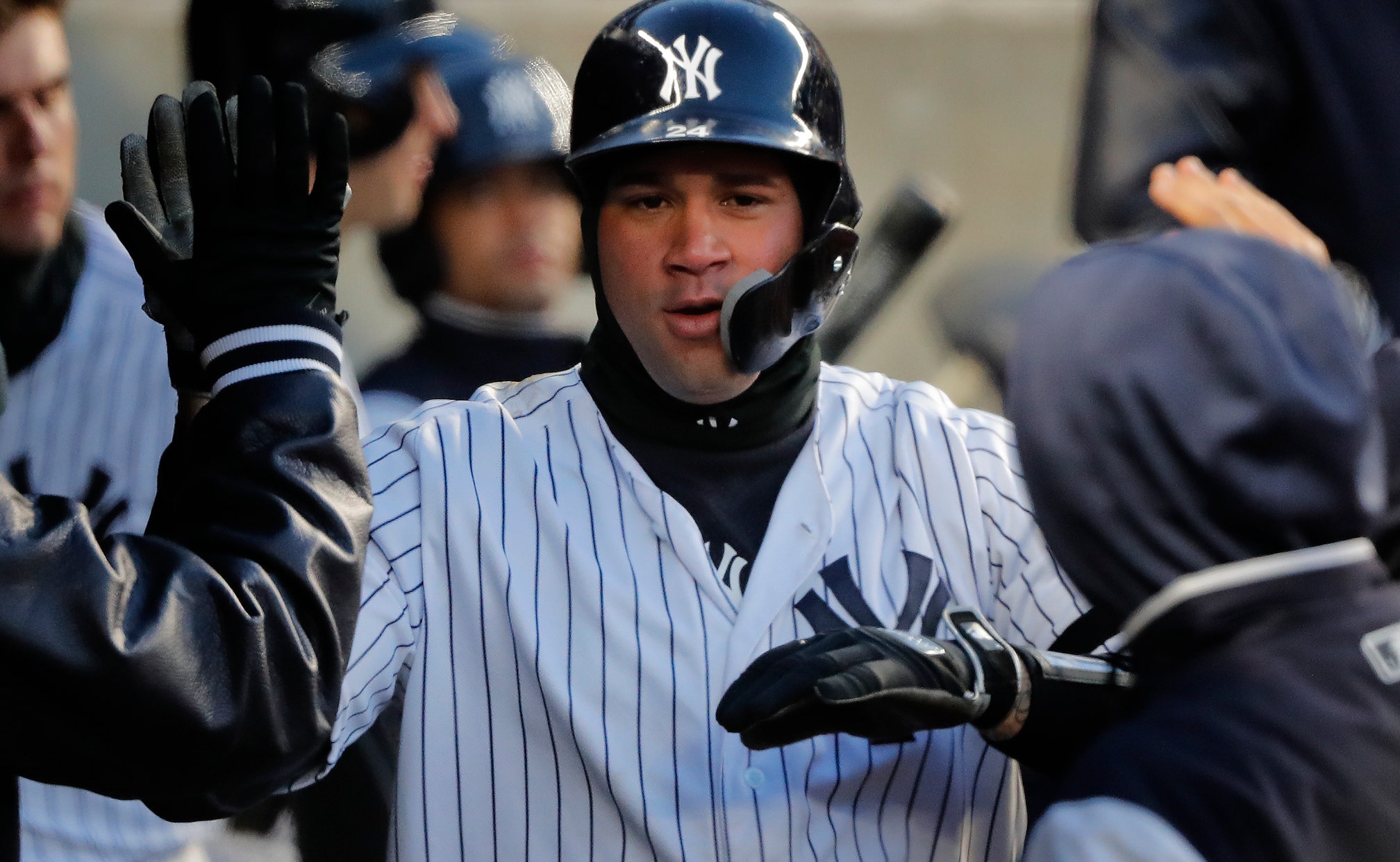 NEW YORK (AP) — The Yankees' stunning injury list grew again Friday, and things are only getting worse for a few of the players already on it.

General manager Brian Cashman said right-handed reliever Dellin Betances will get a cortisone shot in his right shoulder Saturday, which will keep him out another 6 to 7 weeks. That came hours catcher Gary Sánchez became the 12th New York player added to the IL with a strained left calf.

Betances opened the season on the IL after dealing with inflammation in his shoulder during spring training. Cashman said after a rain-shortened 9-6 loss to the Chicago White Sox that oral anti-inflammatories did not solve the issue, a determination made after Betances struggled through a simulated game Thursday.

Betances had an MRI on Friday that showed inflammation centered around a bone spur in the back of his shoulder. Cashman said the Yankees have been aware of the spur since drafting the 6-foot-8 pitcher in 2006, but it hadn't caused him discomfort until this spring. Betances is expected to be shut down for three weeks, then begin rehabbing with hopes of returning in late May.

"The strong belief is that it will resolve," Cashman said. "But obviously it's a killer for a period of time."

The bullpen has struggled without Betances, part of why New York is 5-8 with four straight losses despite leading in 12 of 13 games. Chad Green has an 11.81 ERA after allowing two homers Friday. Jonathan Holder has a 5.19 ERA, and Zack Britton is at 4.76. Not that the rotation has been much help — only Masahiro Tanaka has reliably pitched deep into games.

"We're not getting the competitive play from the healthy guys that we should expect at the same time," Cashman said.

Sánchez was added to the IL a day after a precautionary MRI revealed his injury. Sánchez said through a translator that he was "surprised" by the MRI result, believing the tightness he felt in his calf this week wouldn't require him to miss more time. He was held out of the starting lineup Wednesday at Houston and struck out as a pinch-hitter. He said he felt fine after that game.

He had the MRI during a day off Thursday, and the Yankees decided the strain was severe enough to warrant placing him on the 10-day IL, retroactive to Thursday. Sánchez hopes to return when he's eligible.

Manager Aaron Boone said Sánchez didn't want to go on the IL, but the team convinced him to take the cautious route early in the season.

Severino was scratched from what would have been his first spring training appearance with right shoulder inflammation. He was progressing well in his rehab, going through a promising long-toss session Saturday, before suddenly reporting discomfort playing catch Monday.

Tests revealed a Grade 2 strain, which will prevent the young ace from throwing for six weeks. Cashman said he is perplexed because such a substantial strain usually happens "where you're maxed out," something that wasn't a part of Severino's rehab protocol.

"I don't know how a lat strain during his rehab process could have occurred," Cashman said. "It's a new injury. It's a significant one.

"There is nothing that I can provide for you that would explain how he wound up with a Grade 2 lat strain," he added.

New York will get left-hander CC Sabathia off the IL on Saturday. Sabathia is set to make his first start since having an angioplasty and right knee surgery during the offseason.

The 38-year-old Sabathia had been rehabbing with Class A Tampa. He returned to New York on Wednesday, and his message to the clubhouse was simple.

Andújar threw lightly Friday and also took swings off a tee. He's attempting to avoid surgery for a small labrum tear in his right shoulder. Boone said the biggest concern is the throwing, and it's still too soon to determine if the third baseman can rehab rather than have a season-ending operation.

Boone also said Stanton and Hicks are recovering well, although neither is nearing an immediate return.

New York is more than halfway to its 2018 total of 20 players who had disabled list stints.

Lowe, Snell Pace Rays in Game 2 Win
Two home runs and nine strikeouts helped even the World Series at 1-1 on Wednesday. Here's how.
16 hours ago

World Series Top Plays: Game 2
Check out the top plays from Wednesday night's Dodgers-Rays matchup, as Tampa Bay got right back into the 2020 World Series.
20 hours ago