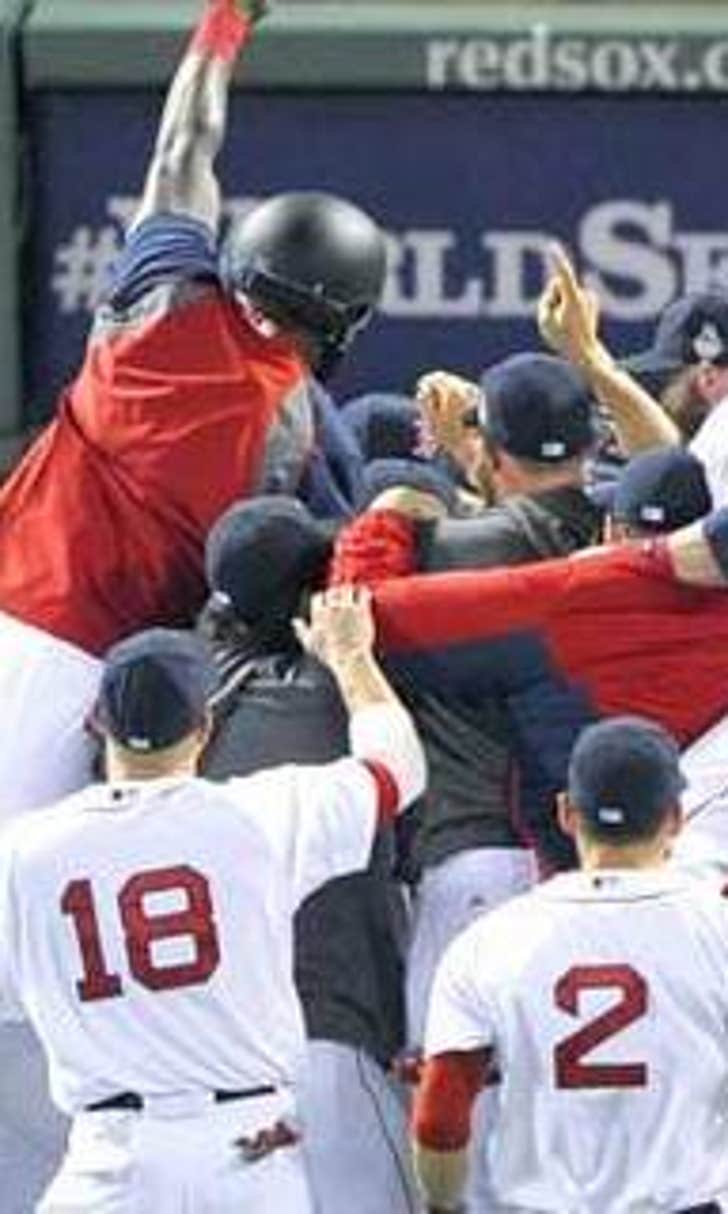 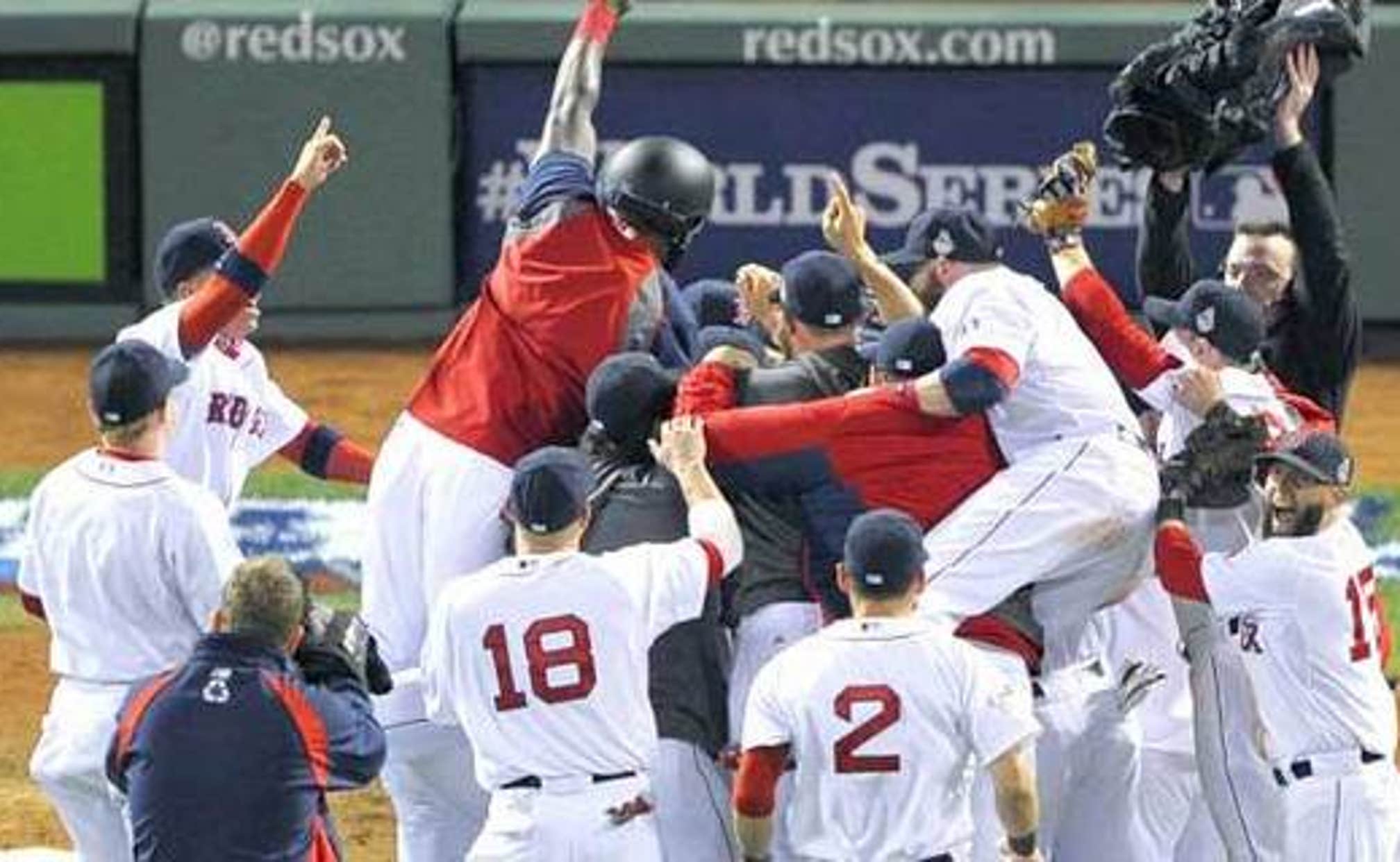 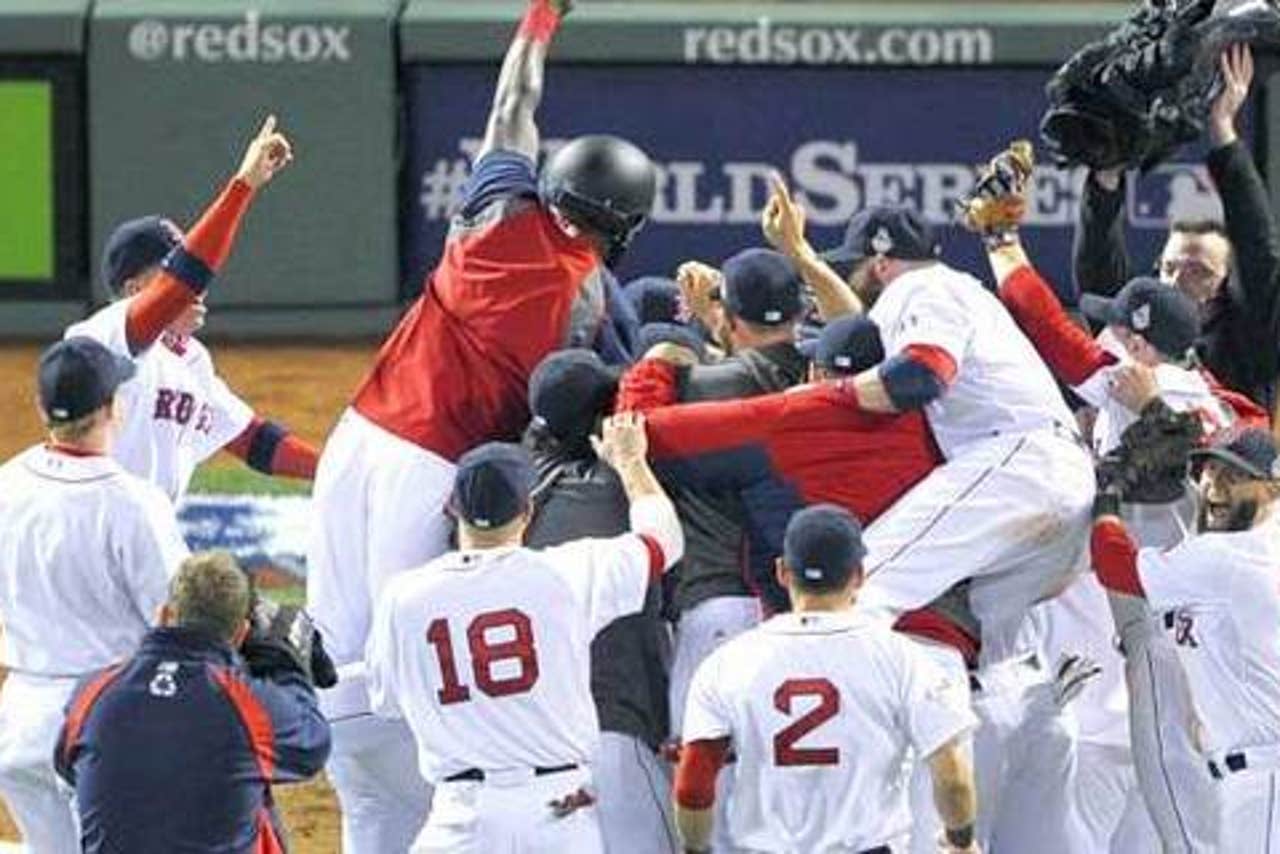 There hasn't been a party like this in New England for nearly a century.

Turmoil to triumph. Worst to first.

"We've dealt with a lot. But our team came together, and we stuck by each other," Dustin Pedroia said. "What a great feeling."

Shane Victorino, symbolic of these resilient Sox, returned from a stiff back and got Boston rolling with a three-run double off the Green Monster against rookie sensation Michael Wacha.

John Lackey became the first pitcher to start and win a Series clincher for two different teams, allowing one run over 6-2/3 innings 11 years after his Game 7 victory as an Angels rookie in 2002.

With fans roaring on every pitch and cameras flashing, Koji Uehara struck out Matt Carpenter for the final out. The Japanese pitcher jumped into the arms of catcher David Ross while Red Sox players rushed from the dugout and bullpen as the Boston theme "Dirty Water" played on the public-address system.

"We have a lot of players with heart. We probably don't have the talent that we had in `07 and `04, but we have guys that are capable (of staying) focused and do the little things," said Ortiz, the Series MVP.

And the Red Sox didn't have to fly the trophy home. For the first time since Babe Ruth's team back in 1918, Boston won the title at Fenway Park. The 101-year-old ballpark, oldest in the majors, was packed with 38,447 singing, shouting fans anticipating a celebration 95 years in the making.

"Maybe they won't have to go another 95 years," said John Farrell, a champion in his first season as Boston's manager.

There wasn't the "Cowboy Up!" comeback charm of "The Idiots" from 2004, who swept St. Louis to end an 86-year title drought. There wasn't that cool efficiency of the 2007 team that swept Colorado.

This time, they were Boston Strong, playing for a city shaken by the marathon bombings in April.

"This is for you, Boston. You guys deserve it," Ortiz told the crowd. "We've been through a lot this year and this is for all of you and all those families who struggled."

After late-season slumps in 2010 and 2011, the embarrassing revelations of a chicken-and-beer clubhouse culture that contributed to the ouster of manager Terry Francona, and the daily tumult of Bobby Valentine's one-year flop, these Red Sox grew on fans.

Just like the long whiskers on the players' faces, starting with Gomes' scruffy spring training beard.

"As soon as we went to Fort Myers, the movie's already been written," Gomes said. "All we had to do was press play, and this is what happened."

Ortiz, the only player remaining from the 2004 champs, had himself a Ruthian World Series. He batted .688 (11 for 16) with two homers, six RBI and eight walks — including four in the finale — for a .760 on-base percentage in 25 plate appearances.

Even slumping Stephen Drew delivered a big hit in Game 6, sending Wacha's first pitch of the fourth into the right-center bullpen.

By the time the inning was over, RBI singles by Mike Napoli and Victorino had made it 6-0, and the Red Sox were on their way.

All over New England, from Connecticut's Housatonic River up to the Aroostook in Maine, Boston's eighth championship can be remembered for the beard-yanking bonding.

Fans bid up the average ticket price to over $1,000 on the resale market and some prime locations went for more than $10,000 each. Nearly all the Red Sox rooters stood in place for 30 minutes after the final out to view the presentation of the trophy and MVP award.

"It was an awesome atmosphere here tonight," Lackey said.

The win capped an emotional season for the Red Sox, one heavy with the memory of the events that unfolded on Patriots Day, when three people were killed and more than 260 wounded in bombing attacks at the Boston Marathon. The Red Sox wore "Boston Strong" logos on their left sleeves, erected a large emblem on the Green Monster and moved the logo into the center-field grass as a constant reminder.

"There's I think a civil responsibility that we have wearing this uniform, particularly here in Boston," Farrell said. "And it became a connection initially, the way our guys reached out to individuals or to hospital visits. And it continued to build throughout the course of the season. I think our fans, they got to a point where they appreciated the way we played the game, how they cared for one another. And in return they gave these guys an incredible amount of energy to thrive on in this ballpark."

"When the fireworks went off at the presentation of the trophy out there, when the ballpark was filled with smoke, it was completely surreal," Farrell said. "To be in this position, given where we've come from, reflecting back a year ago at this time, there's been a lot that's happened in 13 months."

Players then put on goggles for the champagne celebration in the cramped clubhouse.

"They had tremendous will," Henry said.

Among the players blamed for the indifferent culture at the end of the Francona years, Lackey took the mound two days shy of the second anniversary of his elbow surgery and got his first Series win since the 2002 clincher. He pitched shutout ball into the seventh, when Carlos Beltran's RBI single ended the Cardinals' slump with runners in scoring position at 0 for 14.

Junichi Tazawa came in with the bases loaded and retired Allen Craig on an inning-ending grounder to first. Brandon Workman followed in the eighth and Uehara finished.

St. Louis had been seeking its second title in three seasons, but the Cardinals sputtered after arriving in Boston late Tuesday following a seven-hour flight delay caused by mechanical problems. Symbolic of the team's struggles, reliever Trevor Rosenthal tripped while throwing a pitch to Ortiz in the eighth, balking Pedroia to second.

Pedroia had brought back memories of Carlton Fisk's 1975 Game 6-winning home run, sending a first-inning drive about 10 feet foul of the Green Monster foul pole — and waving his left arm once to try to urge the ball fair as he came out of the batter's box.

Lackey escaped a two-on, none-out jam in the second when he retired Matt Adams and David Freese on flyouts and, after a wild pitch, struck out Jon Jay. Boston wasted a similar threat in the bottom half, then went ahead on the third.

Jacoby Ellsbury singled leading off and took second on Pedroia's grounder. Ortiz was intentionally walked, Napoli struck out and Gomes was hit above the left elbow with a pitch, loading the bases.

Victorino, wearing red, white and blue spikes with an American flag motif, had been 0 for 10 in the Series and missed the previous two games with a bad back.

Dropped from second to sixth in the batting order, he took two balls and a called strike, then turned on a 93 mph fastball and sent it high off the 37-foot-high wall in left. Gomes slid home as Yadier Molina took Matt Holliday's one-hop throw and applied the tag, and the catcher then argued with plate umpire Jim Joyce.

Victorino, pumped with emotion, went to third on the throw and pounded his chest with both fists three times.

After Drew's homer, Lance Lynn relieved Wacha with two on, and RBI singles by Napoli and Victorino boosted Boston's lead to 6-0. Wacha entered 4-0 with a 1.00 ERA in his postseason career but gave up six runs, five hits and four walks in 3 2-3 innings, the shortest start of the 22-year-old's big league career.

"I just made too many mistakes," Wacha said. "It doesn't matter how hard you're throwing if you can't locate it."

Boston was a 30-1 underdog to win the World Series last winter but joined the 1991 Minnesota Twins as the only teams to win titles one season after finishing in last place. Now, the Red Sox will raise another championship flag before their home opener next season April 4 against Milwaukee.

The Red Sox had not played a Series Game 6 since that infamous night at New York's Shea Stadium in 1986, when Bill Buckner allowed Mookie Wilson's 10th-inning roller to get through his legs. And there had not been one at Fenway since Fisk's 12th-inning home run off the foul pole atop the Green Monster.

Following consecutive late-season skids, the Red Sox parted with Francona at the end of the 2011 season and reports emerged of players drinking beer and eating fried chicken in the clubhouse during games.

Valentine took over as manager, injuries caused Boston to use a club-record 56 players, and the Red Sox skidded to a 69-93 record, their poorest since 1965.

Farrell, Boston's pitching coach from 2007-10, was hired after a pair of seasons in Toronto's dugout.

A roster turnover began in August 2012 when Adrian Gonzalez, Josh Beckett, Carl Crawfordand their big-money contracts were traded to the Los Angeles Dodgers in a deal that saved Boston just more than $261.66 million through 2018. The Red Sox restocked during the offseason by signing seven major league free agents for contracts of three years or fewer at a total of $100.45 million: Victorino, Napoli, Gomes, Drew, Uehara, Ryan Dempster and Ross.

After losing closers Joel Hanrahan and Andrew Bailey to injuries early in the season, the Red Sox remained relatively healthy: Seventeen players wound up on the DL, down from 27. They finished 97-65 — matching St. Louis for the best record in the major leagues — and made the playoffs for the first time since 2009. They also became the first team since the 2005 Cardinals to navigate the season without losing more than three in a row.

"When we started rolling," Ortiz said, "nobody ever stopped the train."

Bellinger's Bomb Sends Dodgers to World Series
Los Angeles stared down a 3-1 deficit and came up clutch when it mattered. Now, they'll try to finish what they've started.
17 hours ago