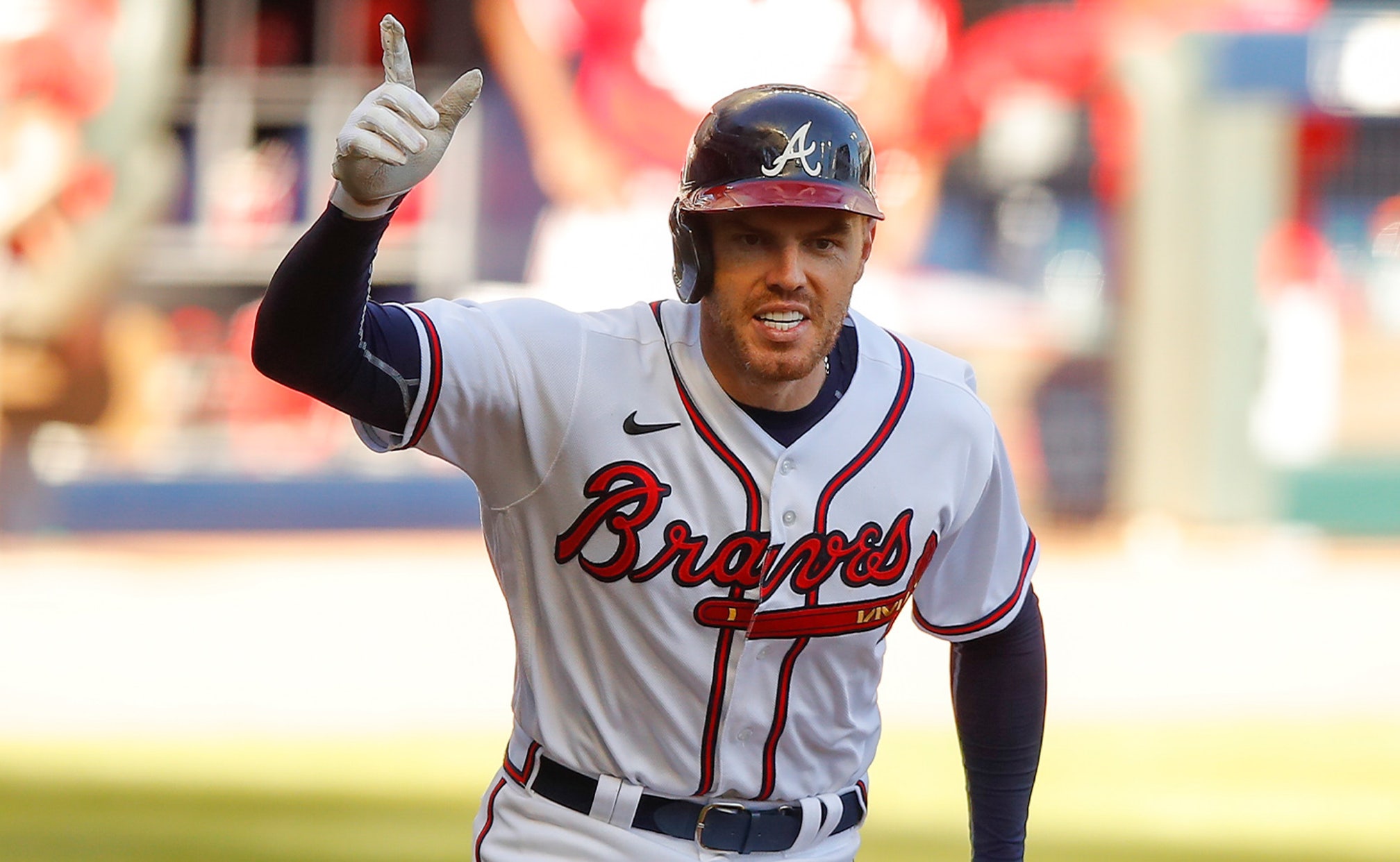 Major League Baseball took a page out of the NCAA Tournament's book on Tuesday, with a whopping eight Wild Card matchups on the docket and start times spanning from noon to 10 p.m. ET.

If that doesn't sound like October Madness, nothing does.

Here are the key takeaways from day two of the MLB postseason.

Braves walk off after lengthy bout vs. Reds

In the day's first game, which the Braves won 1-0, it took both offenses a long time to wake up.

For fans of pitching duels, starters Trevor Bauer and Max Fried both put on showcase performances.

Bauer's Game 1 effort would wind up squandered, however.

Fried also held the Reds scoreless in his 7 innings, retiring eight in a row at one point and striking out five on the day before turning it over to the bullpen. From there, a combined seven Braves relievers kept the Reds off the board, flirting with disaster but ultimately getting the job done.

Cincinnati's relievers also held firm, until Freddie Freeman delivered with two outs in the bottom of the 13th. His single to center field brought Cristian Pache home, who came in as a pinch-runner for Nick Markakis.

Carlos Correa ensured that the Minnesota Twins' postseason nightmares continued, hitting the go-ahead home run in the 7th inning off of Cody Stashak.

The 3-1 Game 2 win for the Astros meant that Minnesota's ignominious postseason run of consecutive losses extended to 18 games.

Meanwhile, Houston booked a ticket to the Divisional Series, where they'll await the winner of the Oakland A's vs. Chicago White Sox series. After the game, Correa had a message for Houston's bountiful haters.

The Chicago Cubs struck first against Miami, courtesy of an Ian Happ solo shot in the 5th inning, but Miami muscled up two innings later to take a 5-1 lead in Game 1.

Corey Dickerson got the party started for the Marlins, barreling up first-pitch fastball from Kyle Hendricks and sending it the opposite way for a three-run homer.

Jesus Aguilar followed up Dickerson's blast with a two-run jack later in the inning off Cubs reliever Jeremy Jeffress, giving Miami a comfortable cushion in their first postseason game since 2003.

A trio of Marlins relievers combined to allow just one Cubs baserunner before slamming the door shut and giving Miami the early series advantage.

If the Marlins go on to advance, they'll extend their unblemished postseason series record to 7-0.

After jumping on White Sox starter Dallas Keuchel early for back-to-back two-run innings to open the game, Game 2 looked like smooth sailing for the A's.

A Khris Davis homer in the 4th gave Oakland a five-run lead, while A's starter Chris Bassitt looked dialed in and stymied Chicago's attempts at a rally.

After Bassitt allowed a single to White Sox shortstop Tim Anderson in the top of the 8th, Bob Melvin turned to Liam Hendriks early, hoping his closer could muster a six-out save. Hendriks got Yoan Moncada to strike out, but served up a two-run bomb to Yasmani Grandal with one out.

With back-to-back strikeouts in the game's final frame, Hendriks appeared the settle down ⁠— until allowing a pair of singles and a walk.

Jake Diekman came in to get the final out, walking in a run before inducing a groundout from Jose Abreu to put the clamps down on Oakland and win 5-3.

The A's were able to exhale, for now at least, with a do-or-die Game 3 slated to take place Thursday at 3 p.m. ET.

It was a tale of two pitchers on Tuesday, as Tampa Bay won the day. Rays pitcher Tyler Glasnow opened the first inning up with a one-two-three performance and didn't let up from there.

Glasnow finished on the mound after 86 pitches, giving up two runs in six innings, while striking out eight.

And he got a little assist from teammate Hunter Renfroe, who, during the bottom of the second inning, bombed a 366-foot grand slam into left field.

And the rest is history – literally and figuratively – as he sent the Rays up 7-0.

Runs were clearly aplenty for Tampa, as Blue Jays ace Hyun-Jin Ryu struggled mightily. The pitcher was charged with seven runs (three earned) in a little over an inning of work.

In two games against Ryu in the regular season, the Rays had recorded only seven hits against the left-hander, on Wednesday, Tampa Bay racked up eight.

The Rays have officially punched their ticket to the ALDS for the second year in a row, and will face the New York Yankees.

The St. Louis Cardinals got off to a hot start against the San Diego Padres in the first game of the series and took it home, winning 7-4.

No one was more fired up than rookie Dylan Carlson, who became the first player in MLB history to have two hits, score two runs, walk twice and have a double in his first playoff game.

Carlson also made plays in the outfield, diving for big catches, and with the help of Paul Goldschmidt from first base, sent Padres rookie infielder Jake Cronenworth back to the dugout twice for trying to run the bases in the late innings.

Speaking of Goldy, he smacked a two-run homer to start the first inning with a nice four-run lead for the Red Birds.

Padres right-hander Chris Paddack had never before allowed four runs in an inning.

San Diego will now have to win two straight games against a team they have beaten just once in 11 postseason tries.

After a rain delay, a rocky start, and a slug fest, the Pinstripes managed a two-run comeback in the top of the ninth inning against Cleveland Indians closer Brad Hand.

Hand was a perfect 16-for-16 in save situations during the regular season, but unfortunately, the same cannot be said for the postseason.

Next up, AL batting champion DJ LeMahieu hit a 0-2 pitch down the center for an RBI single that plated third baseman Gio Urshela and put the Yankees ahead, 10-9.

Up next, the Yankees head to San Diego to challenge the rival Tampa Bay Rays in the ALDS.

Stars out in Los Angeles

Mookie Betts and Corey Seager led the way for the Dodgers this year in Wins Above Replacement, and they led the way to a victory for the boys in blue in Game 1 against the Milwaukee Brewers on Tuesday.

Betts tallied two hits and an RBI, while Seager mashed a moon shot to give the Dodgers a healthy bit of insurance on the way to a 4-2 win.

After the game, Betts had one thing on his mind: food.

We feel you, Mookie.

A wild day of baseball deserves a summary that only someone like Nick Swisher could deliver. Check out the 2009 World Series champ's thoughts on Day 2 of the Wild Card round.