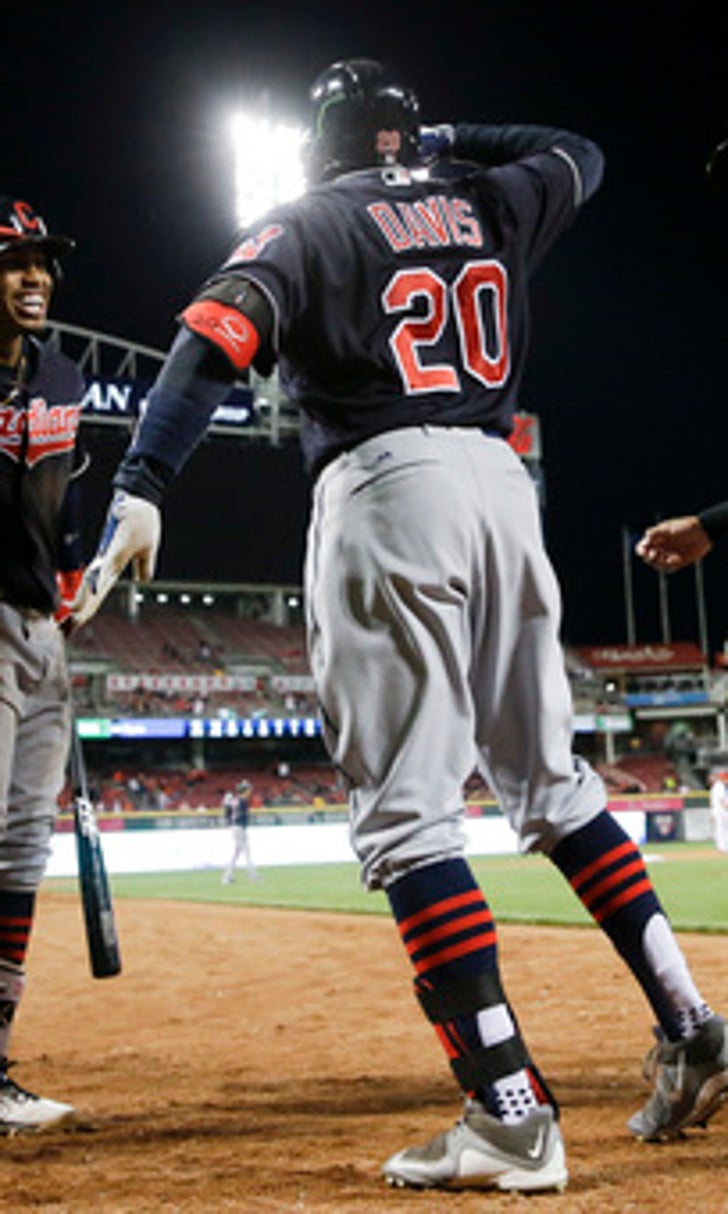 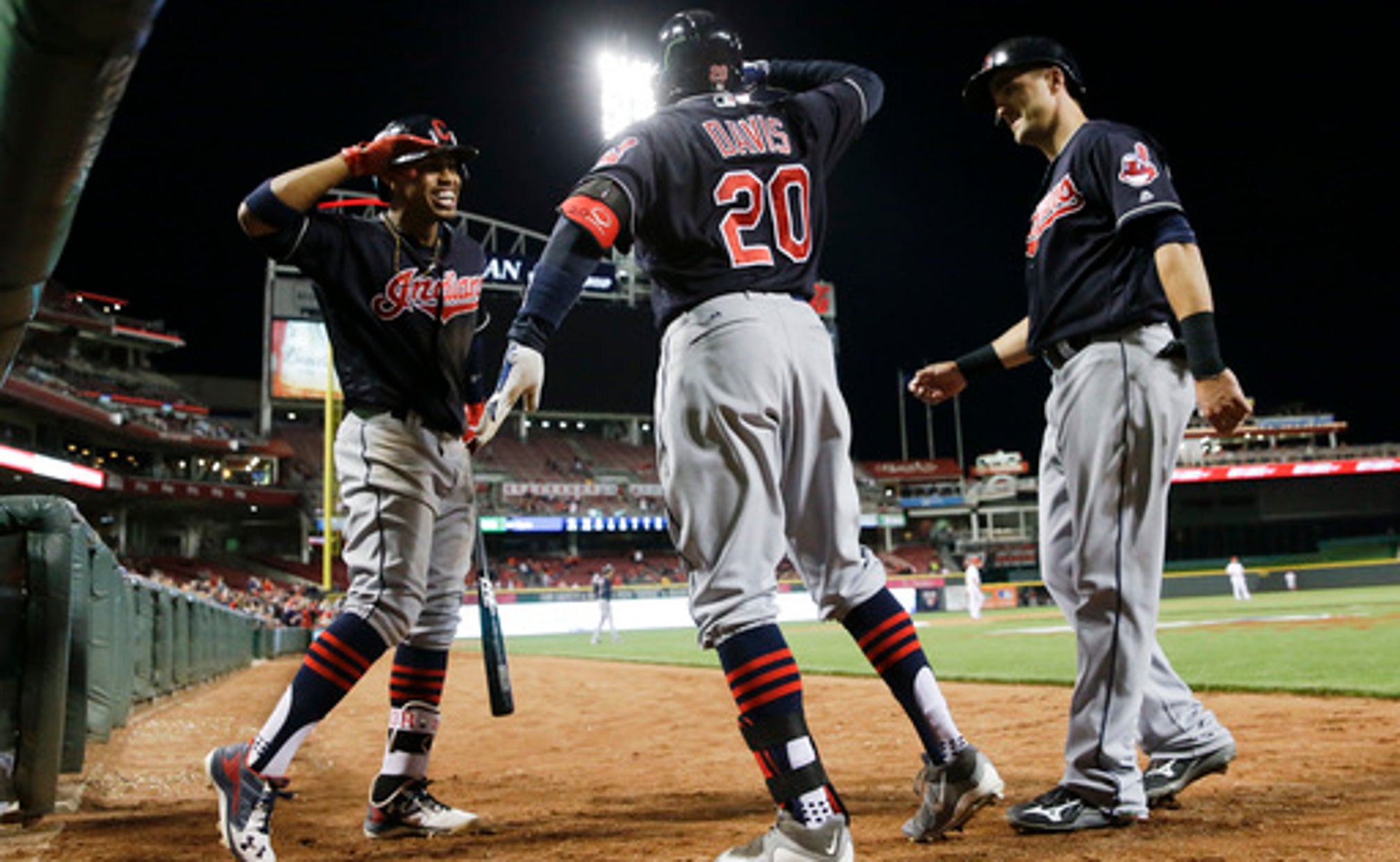 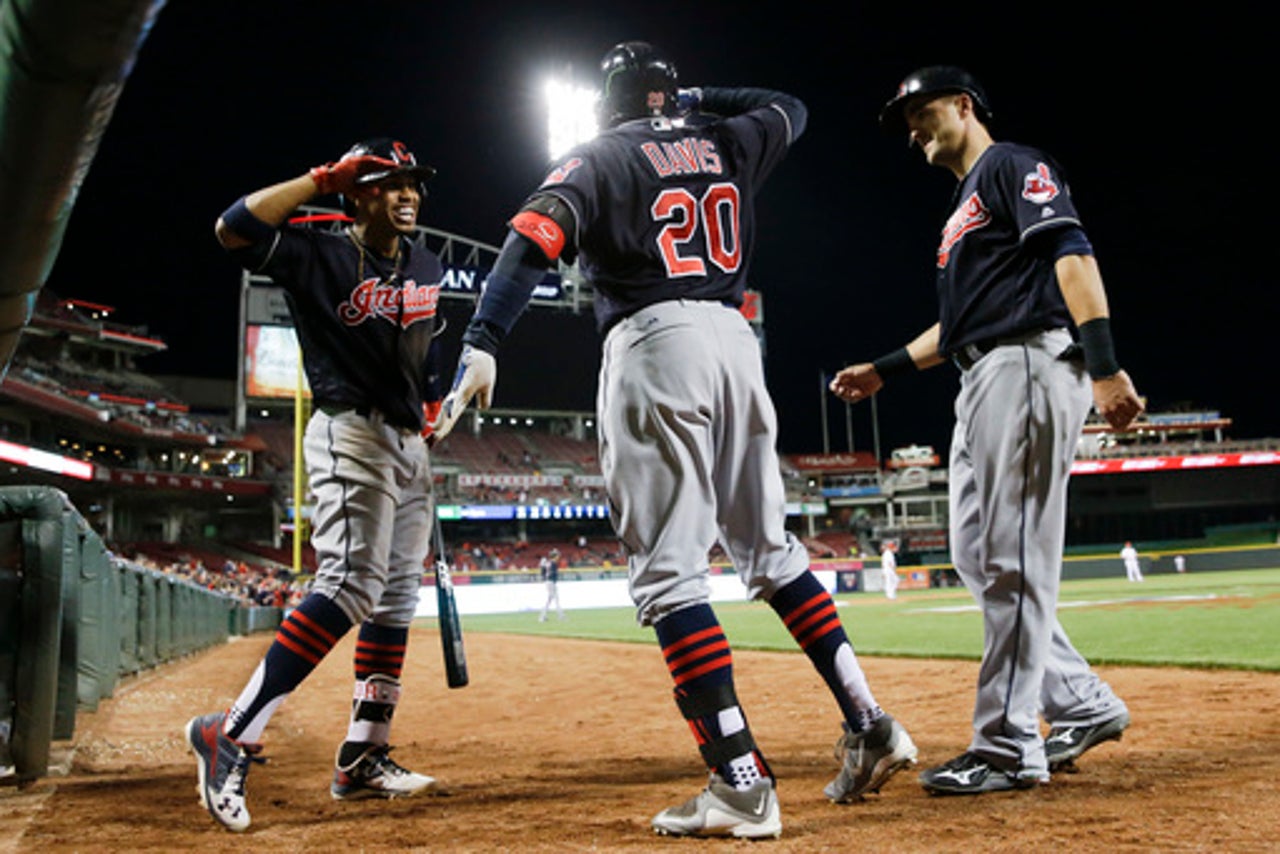 CINCINNATI (AP) Cleveland's top young starter faded in his debut. The way the Indians are hitting lately, it didn't matter.

Rajai Davis hit a tying, two-run homer in the ninth inning, and Francisco Lindor led off the 12th with another homer, powering the Indians to an 8-7 victory over the Cincinnati Reds on Wednesday night.

The Indians won the first two games of the interleague series 15-6 and 13-1 in Cleveland, then made the 250-mile trip south and pulled out another. Davis led the way with two homers - he's 7 for 12 in the three games.

''I'm a small guy so when I hit them, I hope for the best,'' Lindor said. ''It's fun to watch everyone having success.''

Cody Allen (1-3) pitched two hitless innings. Dan Otero gave up a single and a walk in the 12th but retired Brandon Phillips on a routine fly to right, earning his first save since 2014.

Jay Bruce hit two solo homers, and Eugenio Suarez had a three-run shot that allowed the Reds to take a 7-5 lead into the ninth. A beleaguered bullpen couldn't hold on. Tony Cingrani gave up the homer to Davis that tied it.

The Reds' bullpen has given up 33 homers and blown nine of 13 save chances. The Reds have dropped six of seven overall.

''You want to win the games you should win,'' manager Bryan Price said. ''If we did, we'd be right up there with Pittsburgh and St. Louis. It's maddening. People say we stink. Well, we don't stink. We're a lot better than what we've shown.''

Cleveland's Mike Clevinger made his major league debut and showed his nerves at the outset, heading for the wrong bullpen to warm up. He took a 4-1 lead into the sixth and faded. Joey Votto doubled home two runs and Suarez connected off Zach McAllister for a 6-4 lead.

''I thought he kept his composure really well,'' manager Terry Francona said. ''He made a couple of mistakes late.''

Clevinger was Cleveland's top pitcher in the minors last season. The lanky right-hander with curly, shoulder-length hair kept the Reds off-balance until the sixth with his 95 mph fastball and slider. He went 5 1/3 innings, giving up five hits including Bruce's first homer.

''It was fun,'' Clevinger said. ''The way the ball flies definitely surprised me. The whole thing was a rush.''

Bruce's homer was his 127th at Great American Ball Park, surpassing Adam Dunn for the highest total. He added another homer in the eighth. The Reds have hit 35 homers at Great American this season and only eight on the road.

Left-hander Brandon Finnegan retired the Indians in order in the fourth, ending a streak of 21 consecutive innings that Reds pitchers had allowed at least one runner.

The Indians sent OF Tyler Naquin to Triple-A Columbus to open a spot for Clevinger. The Reds called up Jumbo Diaz and Sampson from Triple-A Louisville to help their beleaguered bullpen. Each gave up a run.

Indians: OF Michael Brantley will rest for five to seven days after getting an anti-inflammatory injection in his sore right shoulder. He's on the DL for the second time this season. Francona said there's no estimate for when he'll be back: ''It's completely on how he feels.''

Reds: RHP Anthony DeSclafani felt fine a day after throwing in the bullpen. The next step is to have him throw batting practice. DeSclafani has been on the DL since the start of the season with a strained oblique.

Indians: RHP Josh Tomlin (5-0) tries to push his unbeaten streak to 10 games. Tomlin hasn't lost since Sept. 15. The Indians are 7-0 in his last nine starts, six this season.

Reds: Tim Adleman (1-1) makes his fourth career start. He's lasted only five innings in three of his starts and six innings in the other. Only twice this season has a Reds starter lasted seven innings.