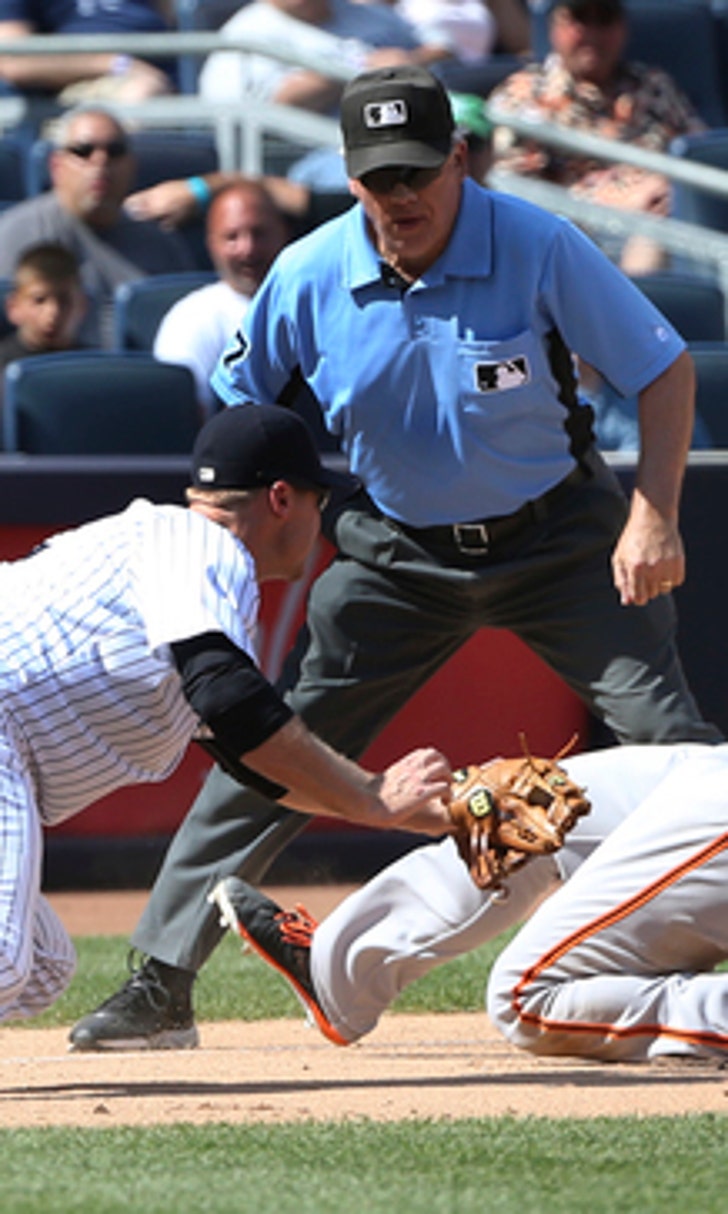 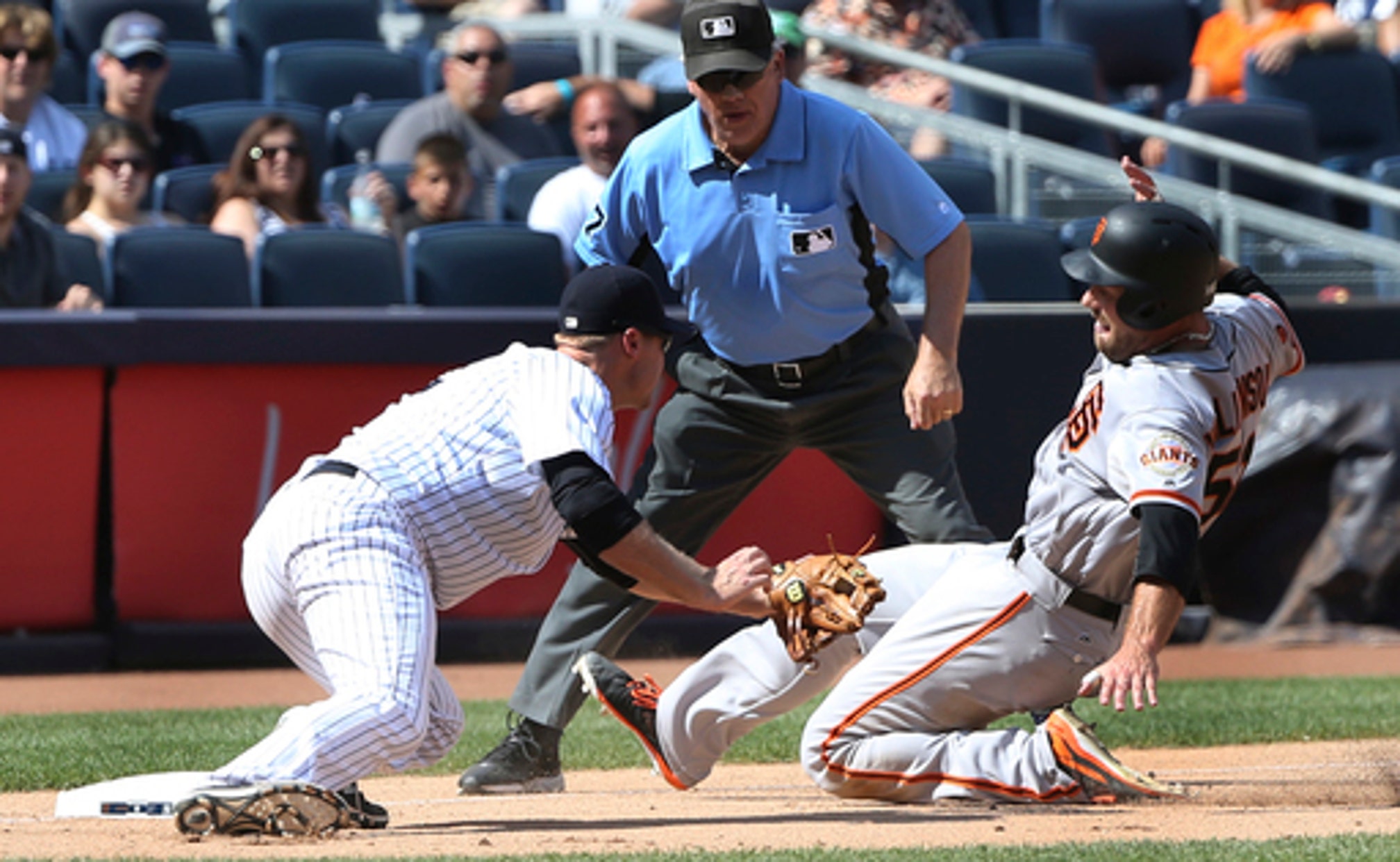 Eovaldi, Yanks top Giants 5-2, but too late to stop trades? 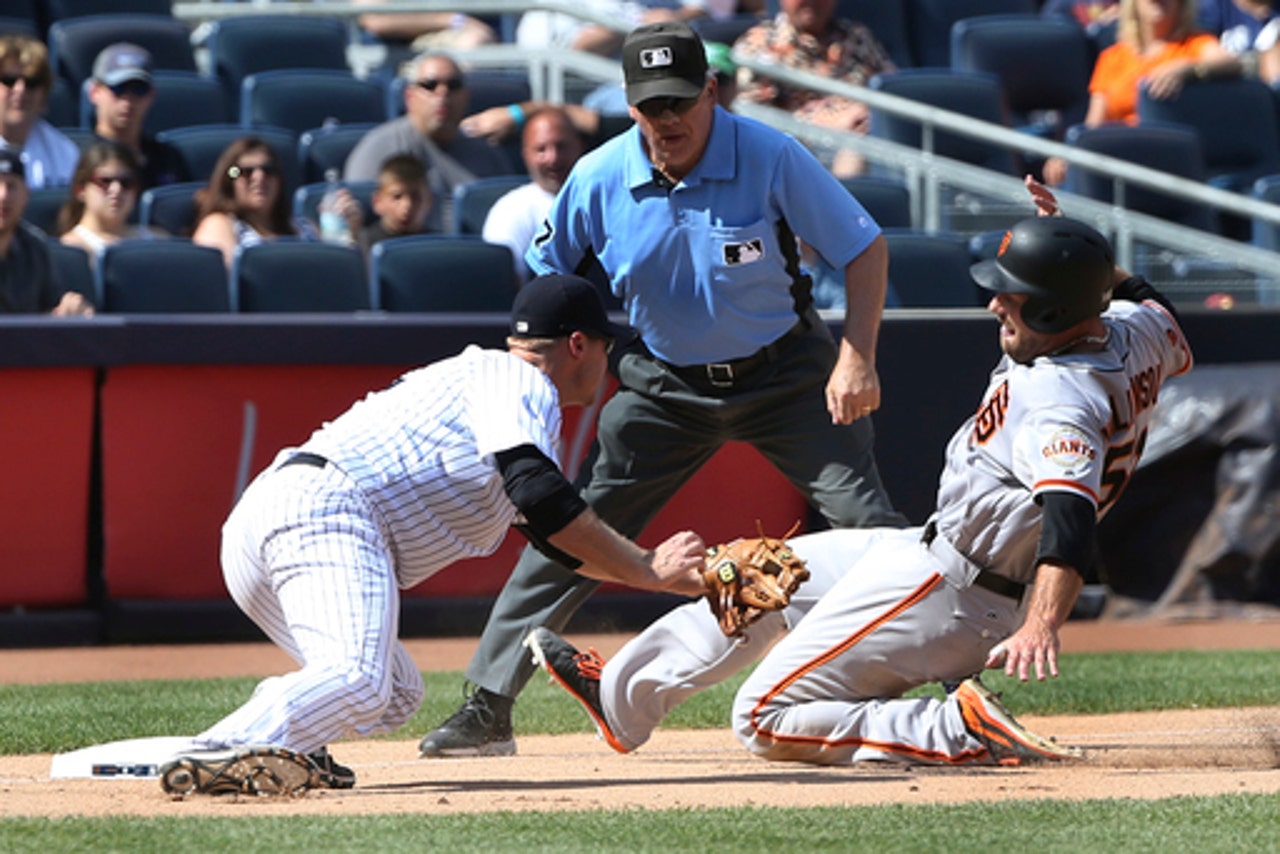 NEW YORK (AP) Nathan Eovaldi pitched shutout ball into the seventh inning, Carlos Beltran and Mark Teixeira hit early solo home runs and the New York Yankees beat the San Francisco Giants 5-2 Sunday to complete a 6-4 homestand that likely was too little and too late to keep management from selling off players ahead of the Aug. 1 trade deadline.

Making his second start following a brief bullpen banishment, Eovaldi (9-6) carried a five-hitter into the seventh, escaping bases-loaded, one-out trouble in a 33-pitch fourth inning when Mac Williamson fouled out and Ramiro Pena grounded out.

Eovaldi left after Angel Pagan's two-out double on his 118th pitch, two shy of his career high. With the No Runs DMC trio unavailable after two days of heavy use, Chasen Shreve came in and loaded the bases with a walk to Brandon Belt, and Buster Posey poked an opposite-field, two-run single to right against Chad Green before retiring Brandon Crawford on a groundout.

Green, brought back from Triple-A last week, pitched 2 1/3 innings for his first big league save.

NL West-leading San Francisco completed a 1-6 trip that opened the second half. Jeff Samardzija (9-6) gave up five runs and eight hits in 5 2/3 innings. He is 1-2 with a 7.29 ERA and nine home runs allowed in his last six starts, reaching the seventh inning just twice. He has given up 19 home runs overall this season.

Beltran hit his team-best 21st home run in the first and Teixeira, wearing white spikes along with Jacoby Ellsbury, doubled the lead on the second. The Yankees chased Samardzija with five hits in the sixth, when Ellsbury grounded into a run-scoring double play, Starlin Castro singled in a run and Didi Gregorius hit an RBI double.

New York turned a spectacular 4-1-5 inning-ending double play in the eighth. Pena grounded past a diving Teixeira at first but second baseman Starling Castro slid on his stomach to come up with the ball on the outfield grass, sat up and threw to Green covering first. The pitcher then threw to third, where Chase Headley tagged a sliding Williamson.

On a sunny afternoon with a 93-degree game-time temperature, Giants manager Bruce Bochy remembered how players used to deal with heat during his playing days.

''We wore cabbage leafs in our hat, and some guys put them in your shoes. It's a leaf and you put it right in your hat, and it keeps your head cool,'' he said. ''I haven't seen that since, I want to say probably `79 or `80. Philadelphia. I remember wearing them there, on the turf.''

Giants: OF Hunter Pence (hamstring) was 1 for 4 with a double in six innings Saturday for Triple-A Sacramento. He was to play seven innings Sunday and then take a day off. ... INF Joe Panik (concussion), who hasn't played for the Giants since June 27, still hasn't appeared for Sacramento since Wednesday. ''He's doing all baseball activities,'' Bochy said. ''He just feels like it's cleared up, so it looks like we've turned the corner on him.''

Giants: RHP Jake Peavy (5-8) opens a homestand against Cincinnati and Anthony DeSclafani (5-0). Peavy is 7-1 in 13 starts against the Reds.

MLB, MLBPA Commit To Racial Equality
MLB players reacted to the $10 million donation and the goal of promoting participation of Black Americans in the sport.
8 hours ago