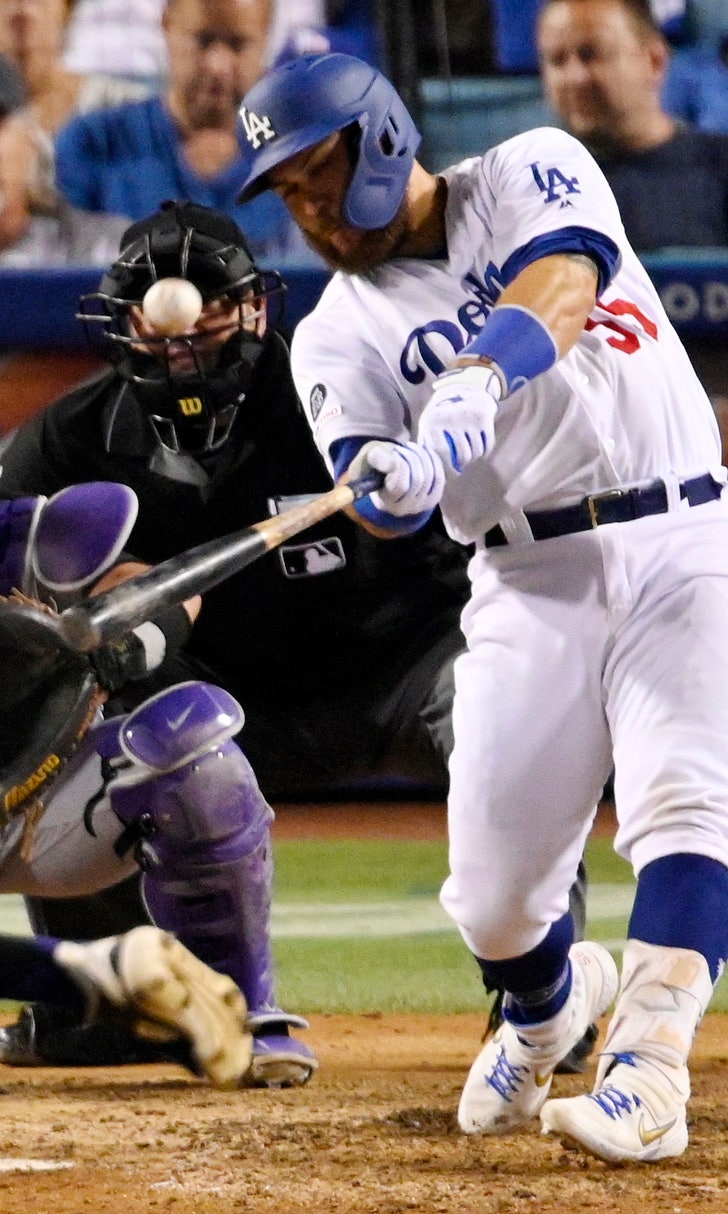 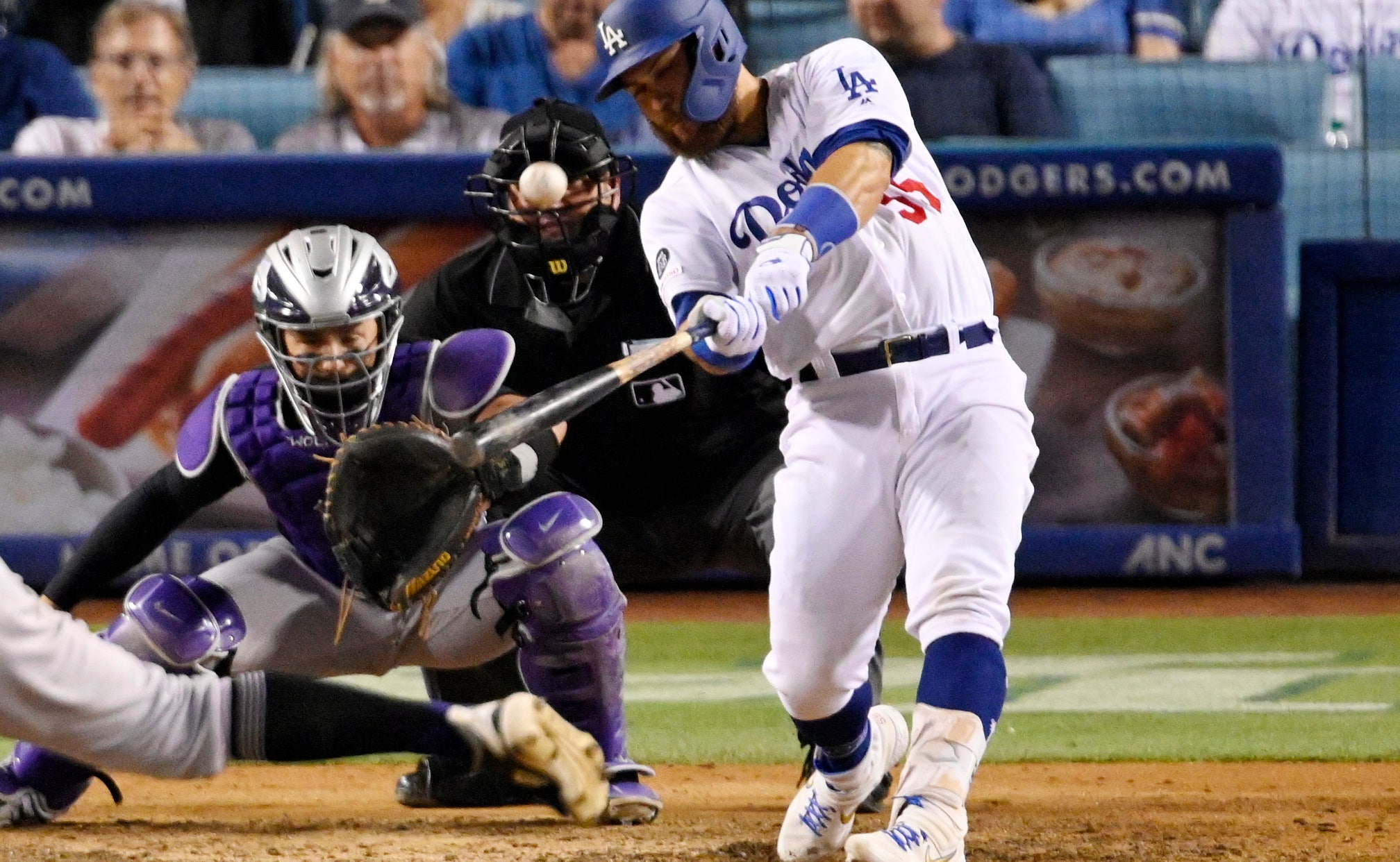 Dodgers rally on HRs by Martin, Freese to beat Rockies 5-3

On a team loaded with young talent, a trio of 30-somethings propelled the Dodgers closer to clinching their seventh straight NL West title.

Martin and Freese are both 36. Justin Turner, who is 34, tied a career high with his 27th homer.

The three homers pushed the Dodgers' season total to 248. They slugged seven homers — one off their season high — in beating the Rockies 16-9 Monday.

"It seemed like we needed every bit of it," Dodgers manager Dave Roberts said.

The Rockies lost their eighth in a row overall, tying a season-long skid, and dropped their 12th in 13 games.

Caleb Ferguson (1-1) got the victory with two strikeouts in one inning of relief.

Colorado led 2-0 on solo homers by Daniel Murphy in the second and Nolan Arenado in the fourth. Arenado's 38th homer was his fourth in his last six games at Dodger Stadium.

Rockies starter Chi Chi González took a two-hit shutout into the seventh. The Dodgers advanced just one runner to second base until that inning.

"Today was a grind," Roberts said. "We persevered. It was good to steal one from those guys."

Cody Bellinger drew a leadoff walk against González before A.J. Pollock took a called third strike. Matt Beaty singled sharply to right field and Bellinger rounded second, nearly getting caught too far off the bag, but Ryan McMahon failed to get the tag down in time on Charlie Blackmon's throw.

González was replaced by Bryan Shaw (2-2), who retired Kiké Hernández on a fly out. Martin followed and launched a 2-2 pitch into left field, giving the Dodgers their first lead of the game.

"He still has that pulse," Roberts said of Martin. "One of the biggest hits of the year for us."

Turner's solo shot into the lower left-field seats in the eighth extended the Dodgers' lead to 5-2.

Closer Kenley Jansen survived another shaky ninth to earn his 28th save. He walked McMahon with one out before pinch-hitter Yonder Alonso doubled to center. Pinch-runner Yonathan Daza scored on Tony Wolters' groundout to second, making it 5-3. Raimel Tapia grounded out to first with a runner on third for the final out.

"You just can't have that walk," Roberts said. "When you don't command the baseball like you're expected to it's hard to put guys away."

The Rockies had the potential tying runs on first and third via singles by Blackmon and Arenado in the eighth, but Casey Sadler induced a fly out to center by Murphy to end the inning.

Julio Urías made his first appearance for the Dodgers since Aug. 16 after serving a 20-game suspension for a domestic violence allegation in May. He wasn't charged in the incident, but was punished by MLB. The left-hander allowed one run and two hits in three innings of a spot start. Urías struck out three and walked none.

"Julio is a guy we're counting on and he looked sharp," Roberts said.

González gave up two runs and three hits in a season-high 6 1/3 innings. He struck out three and walked three on 101 pitches, a season high. The Rockies lost all of his first eight starts this season.

"I executed every pitch and only made a few minor mistakes," he said. "I felt like it was a good outing and it will help my confidence."

Dodgers: OF Joc Pederson wasn't in the lineup but was available off the bench after sustaining an abdominal contusion from crashing into the lower wall in right field making a catch a night earlier. ... INF Max Muncy (right wrist fracture) took ground balls and will be swinging the bat soon. ... RHP Dustin May will face hitters Wednesday. He was struck on the right side of his head by a liner in Arizona last weekend. ... C Austin Barnes will rejoin the team Friday after being sent down to Triple-A Oklahoma City.

Rookie Gavin Lux went 1 for 4 in his second big league game for the Dodgers. He had two hits, including a single on the first pitch of his first MLB at-bat a night earlier. "He looks like he belongs," Martin said.