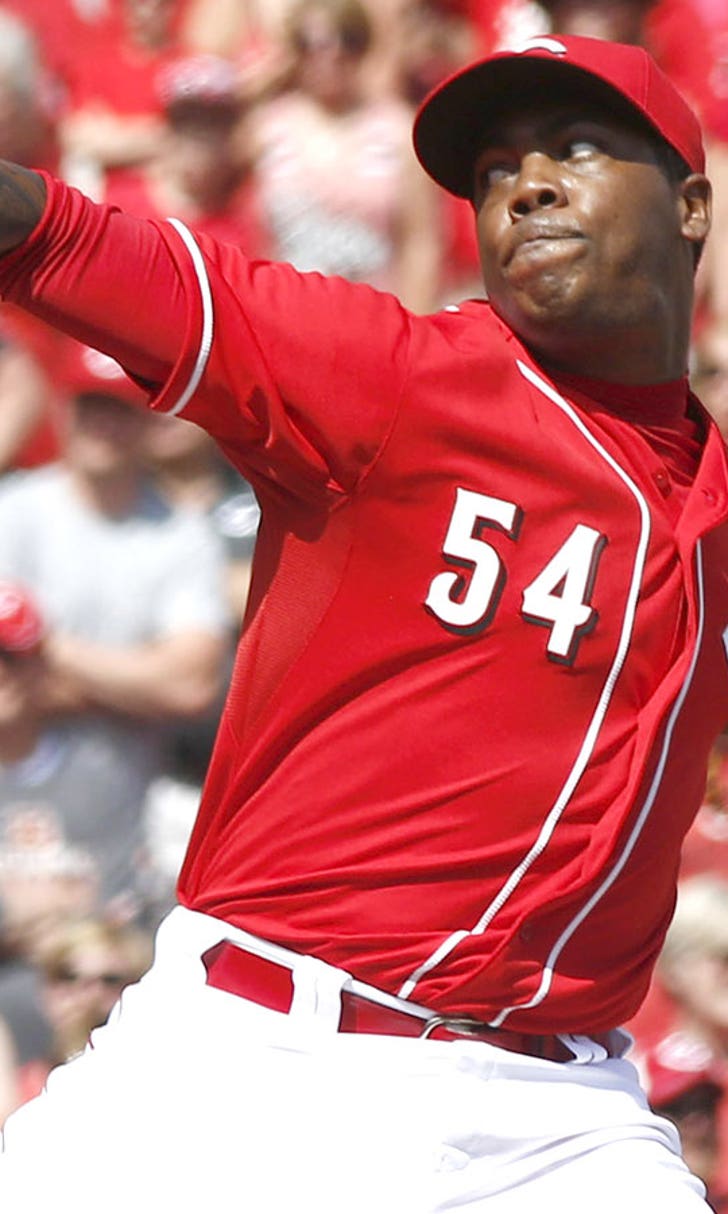 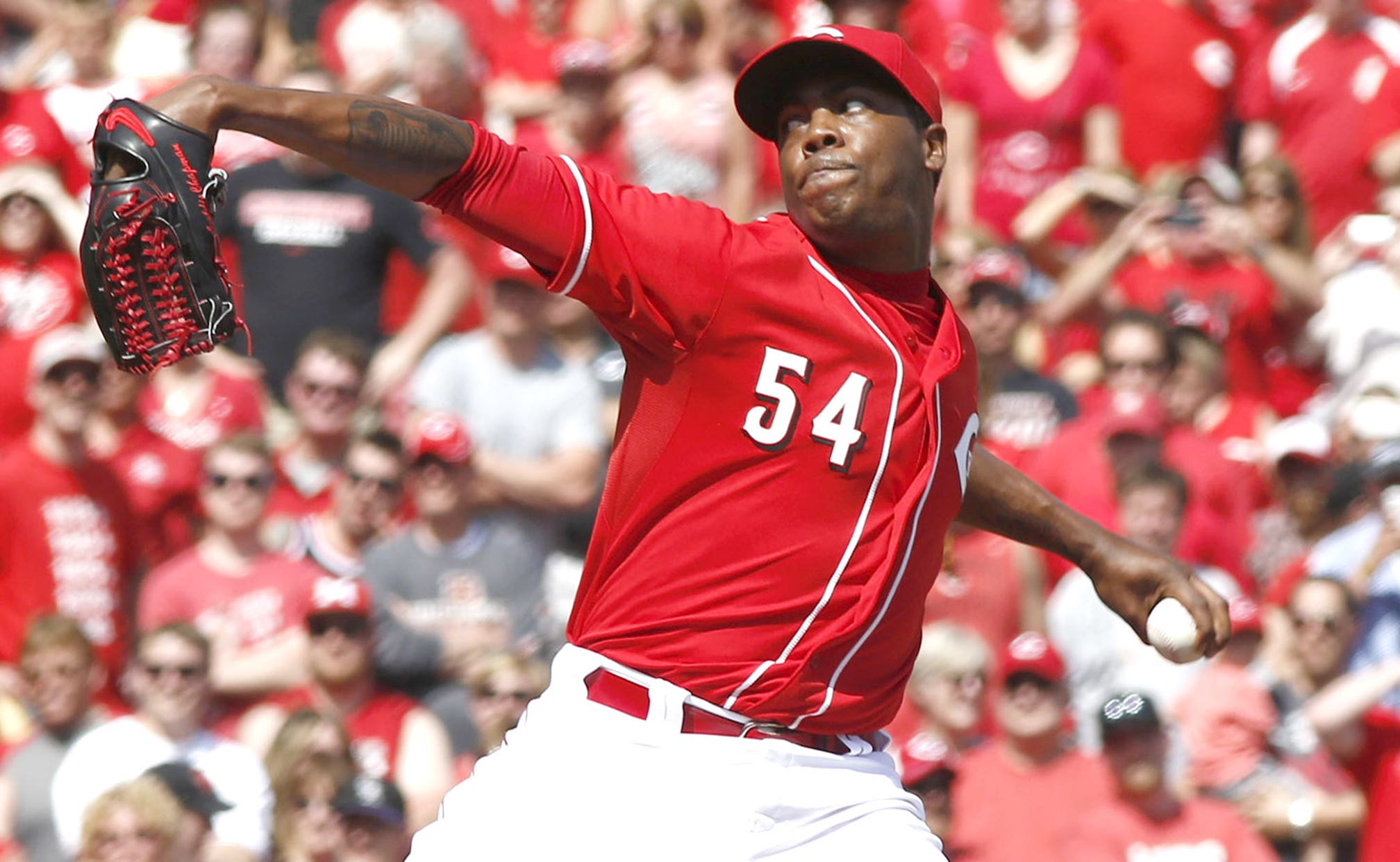 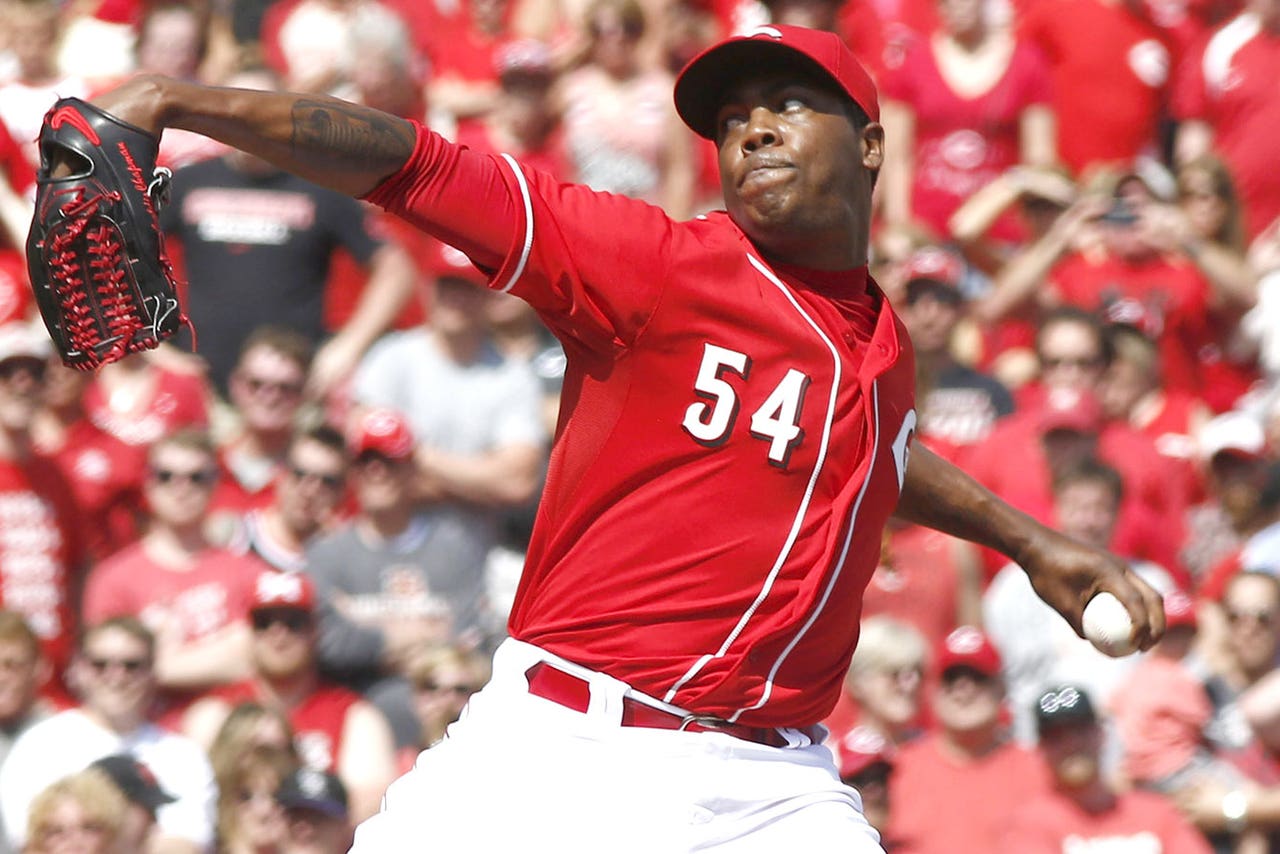 Aroldis Chapman let baseball know in his own way that his long journey back from a scary injury was complete: with a 100-mph strike to the game's hottest hitter.

Chapman made his first major league appearance since being hit above the eye by a line drive during spring training, striking out the side in the ninth with his 100-mph fastball to close out the Cincinnati Reds' 4-1 victory over the Colorado Rockies 4-1 on Sunday.

"I am really happy to get out there for the first time," Chapman said through a translator. "They are a good team but I was mentally prepared to face them. Facing those type of hitters makes you feel better than if you just break the ice."

Chapman walked Troy Tulowitzki, who started the day leading the National League with a .405 batting average, but had an easy inning.

Todd Frazier hit his second 400-foot home run in three days to back Homer Bailey's shutdown pitching as Cincinnati won the rubber match of its three-game series with Colorado.

"It was great to see Aroldis. The confidence and determination he had was very cool," said Frazier without a thought to his second home run of the series or his 11-game hitting streak.

Chapman was greeted by a standing ovation from the crowd of 33,143. He reached 100 mph with his first pitch and topped out at 102 mph in earning the save. Chapman had been out since being hit above the left eye by a line drive during a spring training game on March 19.

"I was excited to get back, but I was even more excited when I heard the fans," said the 26-year old Cuban.

Chapman was hit hard in his in his last two rehab starts in Louisville, allowing eight earned runs in one inning over the two-game stint.

"As much as you want guys to treat those assignments like a normal game, they don't always have the same focus," Reds manager Bryan Price said. "The reports we had said he was throwing the ball well. He made some big pitchers to get some good hitters out."

Skip Schumaker drove in two runs and the Reds capitalized on two Colorado throwing errors to send the Rockies to their third loss in four games.

Besides contributing two sacrifice bunts, Bailey (3-2) limited a Colorado offense that produced 11 runs and 16 hits on Saturday night to one run -- Charlie Blackmon's ninth homer of the season and second in two games -- and four hits with two walks and six strikeouts in 7-1/3 innings.

"Homer worked with (pitching coach) Jeff Pico to raise his hands above his head during his wind up," Price said.

Bailey, who signed a $105 million contract in March, struggled through his first seven starts. He began the game with an ERA at 5.36.

"I had to do something," Bailey said. "I had to figure something out. There was nowhere else to go but to be better."

Manny Parra got the final two outs of the eighth inning.

The Reds snapped Nolan Arenado's streak of getting on base at 30 consecutive games, two days after his hitting streak was stopped at a franchise-record 28 games.

"Chapman threw the ball very well," Rockies manager Walt Weiss said. "He used his splitter well to left-handed hitters. He was on today."

Juan Nicasio (4-2), who had won his previous two starts, allowed five hits and four runs -- two earned -- with one walk and three strikeouts.

Billy Hamilton, making his first start since spraining two knuckles on his left hand while making a diving catch on May 1, led off the first inning with a bunt single up the first base line and went all the way to third on first baseman Justin Morneau's throwing error. Hamilton scored on Schumaker's groundout to second baseman DJ LeMahieu.

The Reds made it 2-0 in the third on Ramon Santiago's leadoff bloop single to left field, Bailey's sacrifice, a Nicasio balk while facing Hamilton and Schumaker's soft, two-out liner to center field.

Blackmon became the first Rockie to reach base when he led off the fourth with an estimated 380-foot shot into the right field seats on a 2-2 pitch.

Frazier got that run back with his seventh homer of the season, an estimated 421-foot drive to center field on a 2-2 pitch with one out in the fourth inning that extended his career-high hitting streak to 11 games (13 for 42, .310). Frazier reached an estimated 485 feet with a home run on Friday.

The Reds used another throwing error to take a 4-1 lead in the fifth. With Santiago on third base and Hamilton on second and two outs, third baseman Arenado's high throw to Morneau on Brandon Phillips' two-out grounder pulled the first baseman off the bag. Phillips slid under the attempted tag while Santiago scored.

NOTES: Blackmon's homer was Colorado's 20th of the season with two strikes. . . . Reds RHP Mat Latos threw a bullpen session before the game, the next step in his comeback from a flexor mass strain in his right elbow that has kept him out all season. Latos had surgery to remove bone chips from the elbow shortly after the 2013 season and needed surgery on February 14 to repair a torn meniscus in his left knee. He has won 14 games in each of his first two seasons with Cincinnati. . . . Colorado and Cincinnati both have Monday off. The Rockies are scheduled to open a two-game interleague series at Kansas City on Tuesday, the same day the Reds are due to open a three-game home series against San Diego.