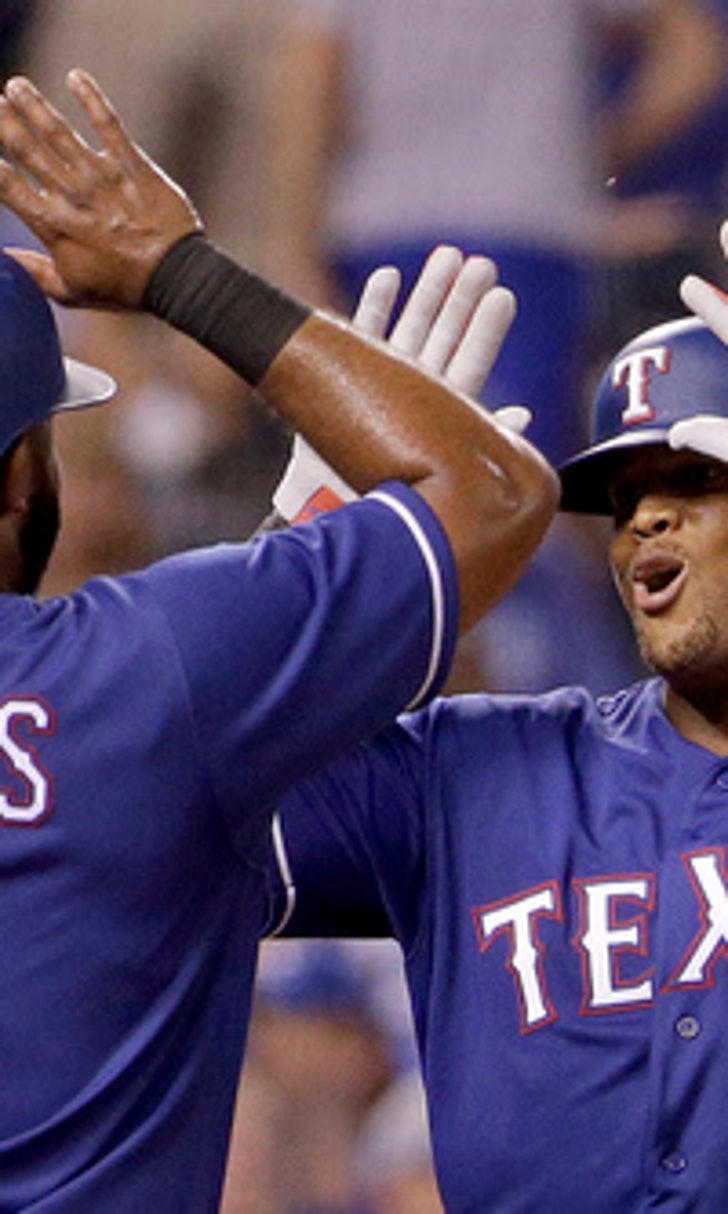 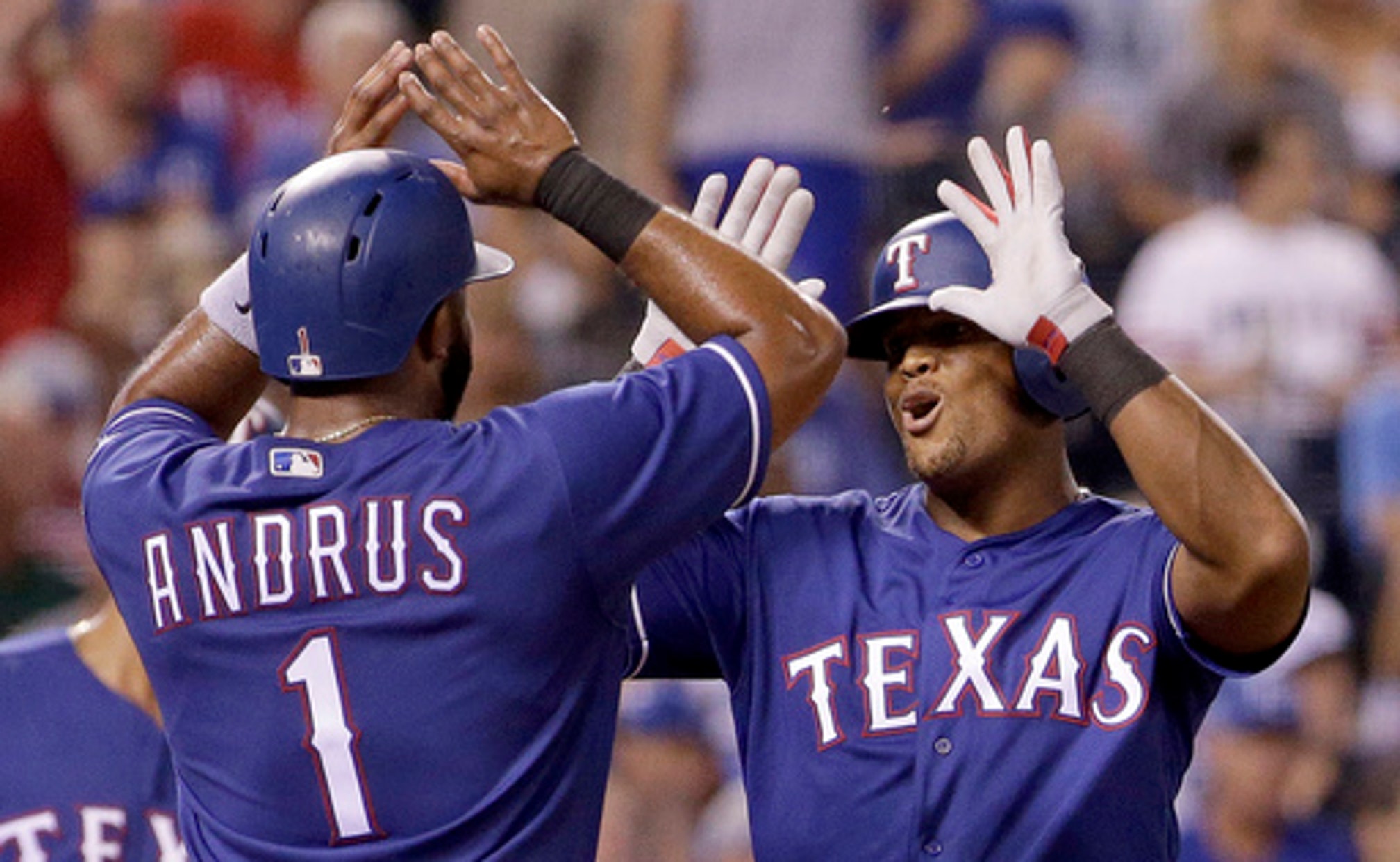 KANSAS CITY, Mo. (AP) Adrian Beltre's three-run homer had knotted the game, and with the momentum swinging the way of the Texas Rangers, manager Jeff Banister gazed at Mike Napoli sitting on the bench.

''It was time to pull the trigger,'' Banister said.

So he summoned Napoli to pinch hit for Joey Gallo with a runner aboard in the seventh, and the veteran first baseman responded with a go-ahead two-run homer to left field, sending the Rangers to a 5-3 victory over the Kansas City Royals to open the second half Friday night.

''We've got him on the bench. That's what he's here for,'' Banister said about Napoli, who homered for the fifth time in his last eight games. ''We just felt the better matchup was Napoli.''

Martin Perez (5-6) allowed eight hits and a walk over seven innings, but kept all that traffic to just three runs. Two of those came in the second, when Alcides Escobar homered to left.

Beltre connected in the sixth off Royals starter Jason Hammel, who had just surrendered back-to-back singles - the first hits off him all night. Napoli followed with nobody out in the seventh, sending a poor pitch from reliever Mike Minor (5-2) soaring over the left-field wall.

Matt Bush breezed through a perfect eighth and Alex Claudio handled the ninth for his second save, giving the Rangers their 10th straight win over Kansas City dating to last July.

''What happened in the first half happened,'' said Claudio, whose team now sits just a game below .500 and squarely in the playoff race. ''It's time to do what we do.''

The Royals jumped ahead 2-0 in the second, when the light-hitting Escobar ripped a 2-0 pitch from Rangers starter Perez off the foul post in left field. The ball caromed into the Royals bullpen as Escobar trotted around the bases for a two-run homer.

Jorge Bonifacio made it 3-0 when he drove in Whit Merrifield with a single in the fifth.

The Rangers, crossed up all night by Hammel, finally managed their first hit with one out in the sixth when Elvis Andrus beat out an infield single. Nomar Mazara made it consecutive hits before Beltre cracked the 453rd homer of his career, passing Carl Yastrzemski for 38th on the career list.

''We let them back in the door there,'' Hammel said. ''A slider in the dirt, that's just got to be a better-executed pitch there. For a guy who's sitting and from what I know and the experience of just facing him, he sits soft with two strikes. I've thrown him quite a few to him already. So he was looking for it and it stayed up enough for him to put a good swing on it.''

Minor entered a couple batters later and finished the sixth, but he surrendered a single to Carlos Gomez in the seventh before Napoli's homer gave the Rangers the lead for good.

The Royals' Eric Hosmer singled in the sixth, extending his hit streak to 16 games. ... Beltre went 2 for 3, pushing his average to .347 against Kansas City. That trails only Ichiro Suzuki (.355) for career best against the Royals. ... Hammel hasn't won since June 19 at Boston.

Rangers RHP Keone Kela (right shoulder soreness) was ''all smiles'' after throwing Thursday, manager Jeff Banister said. The next step is to throw off a mound. ... Banister said the All-Star break probably helped 1B Joey Gallo, who has been dealing with a sore left knee tendon all season. But Banister said, ''I don't think four days gets rid of (the injury) completely.''

The Royals put RHP Neftali Feliz on the paternity list and recalled RHP Miguel Almonte from Triple-A Omaha. Almonte has appeared in two games for the Royals this season.

Rangers LHP Cole Hamels and Royals LHP Danny Duffy square off Saturday night. Hamels has tossed 13 1/3 scoreless innings over his last two starts, the third-longest streak in the majors, while Duffy will be trying to bounce back from a poor outing against the Dodgers before the break.

What You Need To Know: MLB Home Stretch
Playoff baseball is less than a week away. What's at stake in the final days before the Wild Card begins? Let's catch you up.
9 hours ago