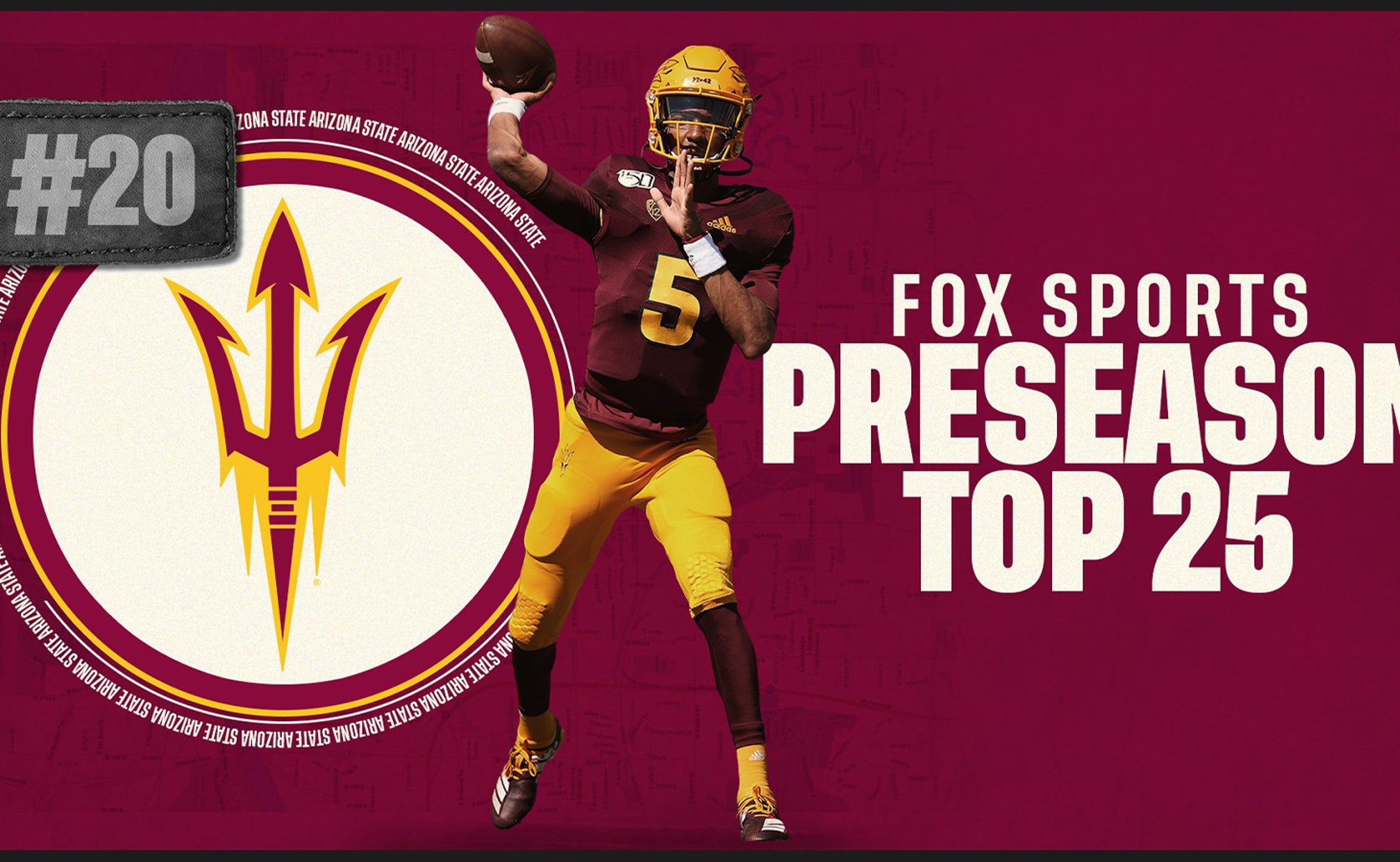 Welcome to the FOX Sports preseason Top 25, where we’re breaking down college football's standout squads for 2020. We polled our roster of FOX College Football talent to get the most comprehensive results and provide a consensus list as of Aug. 3. Join us as we count down from 25 to 1, revealing a new team each day. Previous teams can be found at the end up this writeup, which focuses on …

The Sun Devils opened 2019 with three straight wins, including a victory over No. 18 Michigan State in East Lansing. Conference play proved to be a different story for Herm Edwards’ team, as ASU faltered off the bat against Colorado at home and at one point lost four straight games. ASU closed out the season with a three-game winning streak that included a 20-14 win against Florida State in the Sun Bowl, ending the season 8-5 with a 4-5 Pac-12 record.

Tim Brando’s thoughts: “Sophomore QB Jayden Daniels is dynamic. As a freshman he had 17 TDs with 2 INTs and just under 3000 yards passing. His O-line is a year older and WR Frank Darby returns. The Sun Devils turned some heads out west last year and will be better this year in Herm Edwards’ third season.”

Key players incoming/returning: Daniels is the most important factor for ASU, and Edwards has handed him the keys to the offense with a new offensive coordinator in former Boise State coach Zak Hill. Darby headlines an otherwise largely unproven group of wideouts, but the team did recruit the position hard. Two incoming freshmen, Daniyel Ngata and DeaMonte Trayanum are expected to battle for the starting RB position.

A new scheme is coming on defense, but a bunch of familiar faces will be asked to run it. Jermayne Lole, the team leader in sacks with 6.5, will be the disrupter on the defensive line. Merlin Robertson and Darien Butler headline an experienced group of linebackers, and the secondary is loaded in veterans such as Jack Jones and Chase Lucas at corner.

Key players lost: A pair of All-Pac 12 first-teamers are gone in RB Eno Benjamin and WR Brandon Aiyuk headed to the NFL. Those two alone accounted for over 2,600 total yards and 20 combined TDs in 2019. The Sun Devils will also be without Kyle Williams, another key WR. The offensive line also lost three starters to graduation.

The defense remains largely intact from 2019, but a few solid contributors depart, including George Lea along the defensive line and LB Khaylan Kearse-Thomas. With a nose for big plays, Kearse-Thomas had two INTs, 4.5 sacks and led the team in tackles for loss with 12. CB Kobe Williams is also gone.

ASU was in control for the majority of the upset against Oregon, but the fourth quarter certainly got wacky. The Sun Devils had a 7-24 lead before Oregon rattled off back-to-back TDs and narrowed the score to 21-24. ASU responded with an 80-yard bomb to Aiyuk as Daniels ended the Nov. 23 contest with 408 yards passing and 3 TDs, putting Oregon’s College Football Playoff hopes to bed.