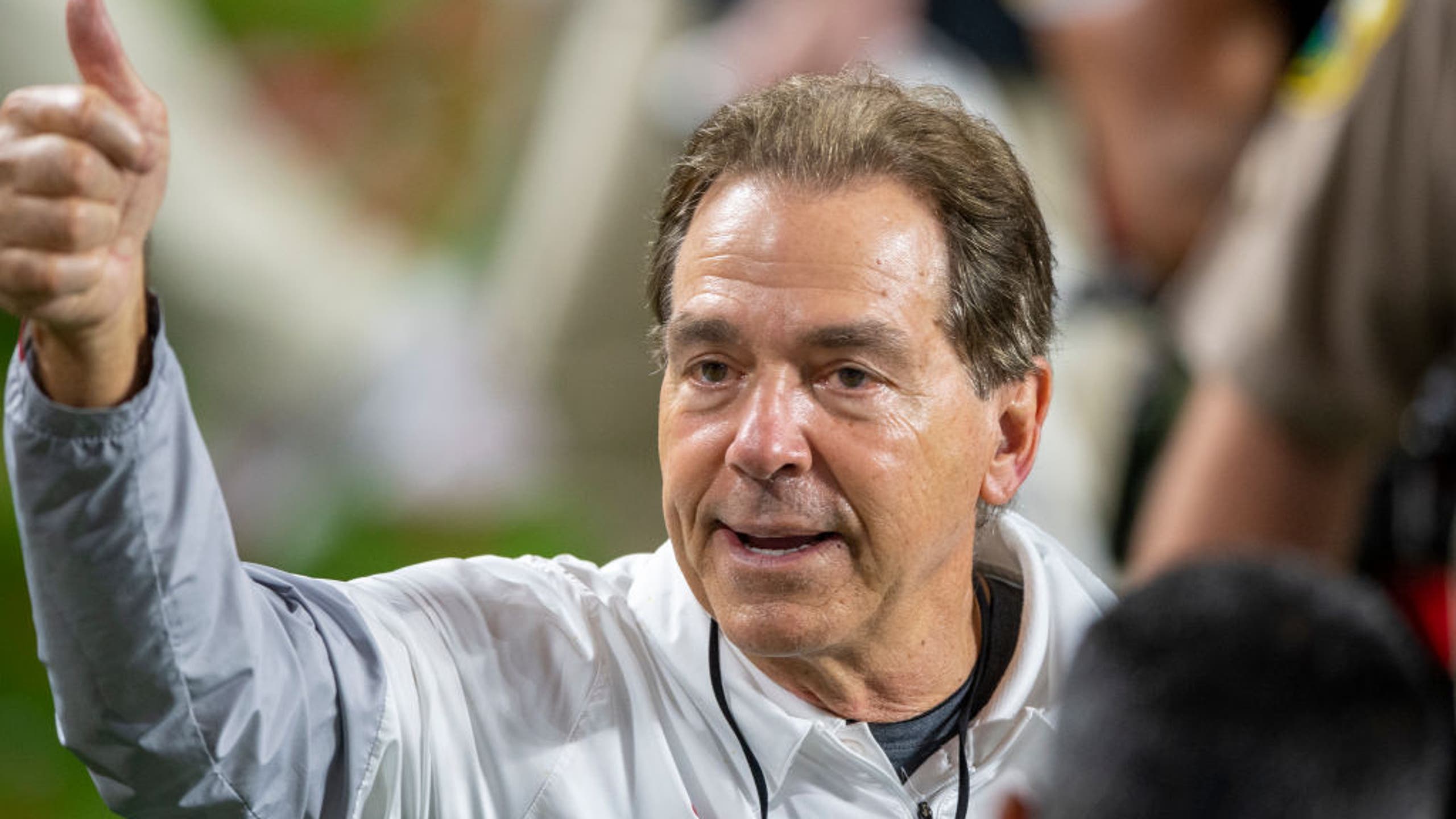 When Nick Saban finished his last season as a player at Kent State in 1972, he believed that he was through with football — forever.

What did he aspire to do with his life? Run a car dealership.

"I thought it was better to sell cars than to fix them up," Saban said in Monte Burke’s book, Saban: The Making of a Coach. 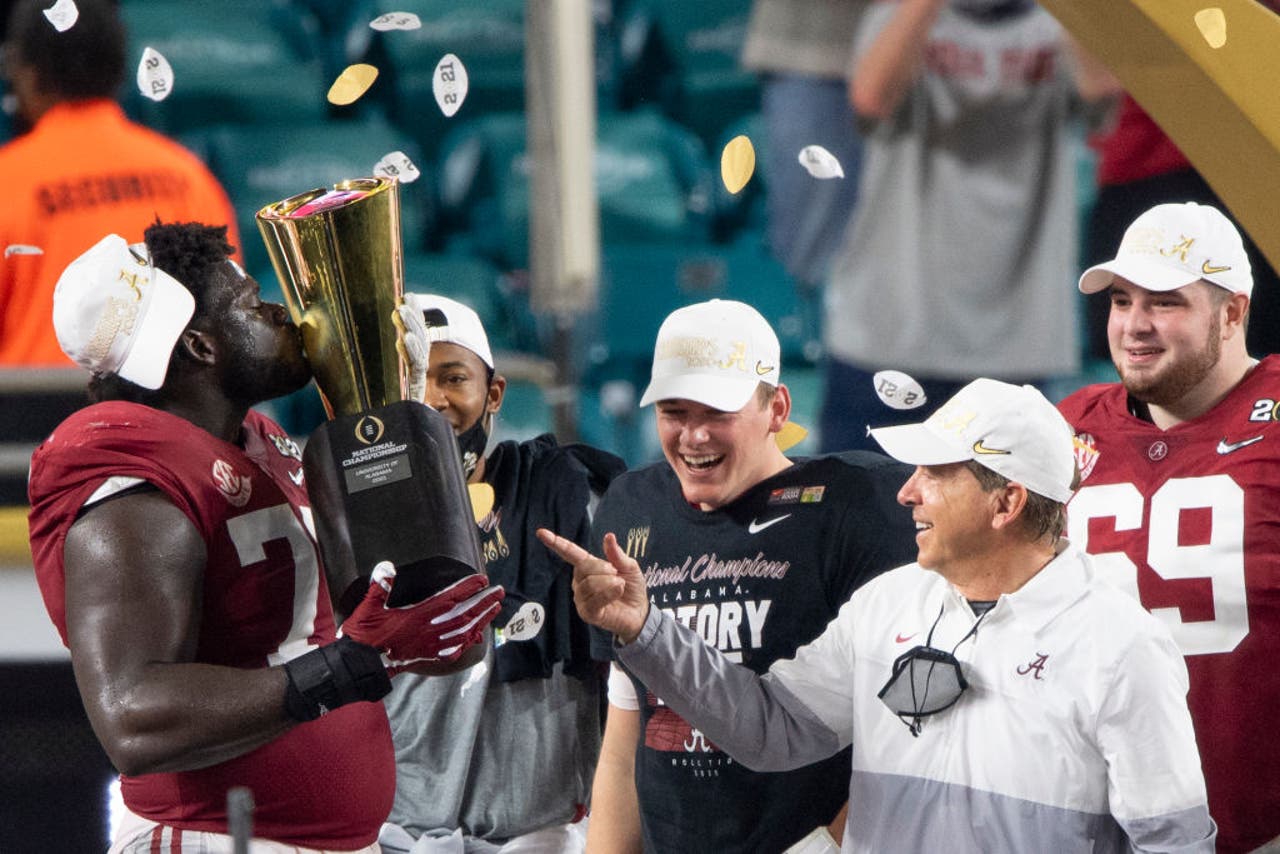 Don James convinced Saban to stay on as a grad assistant for the Golden Flashes. That decision sparked the greatest college football coaching career in the 151-year history of the sport.

Over the course of nearly 50 years as a coach, Saban has developed his own philosophy for not just competing but also dominating the game, called The Process. Inside of The Process, he developed a system for analytically grading recruits.

He taught his staff to evaluate dozens of characteristics among the players they were recruiting. He measured everything from toughness to hip flexibility to academic achievement. And he was meticulous.

"Different-colored dots were put next to the names: Green meant the kid had character issues. Red meant potential academic problems," Burke wrote. "Eventually, all of those bits of information were processed into an overall grade — from 1 to 5, with 1 being the best."

To date, the best grade an incoming recruit ever received was 1.8 (Julio Jones).

The Tao of Saban is driven by a central ethos: No one is perfect, and the process of winning is more important than actually winning.

"Believe it or not," Saban wrote in his book, How Good Do You Want to Be? A Champion’s Tips on How to Lead and Succeed, "some people are not wired to accept success. They really don’t enjoy it; they are more content going back to work than reveling in success. I guess I am one of those people."

Only one of those people might be able to put together one of the greatest recruiting teams of all time. (And he owns a stake in a car dealership — actually, four of them.)

After his seventh national title, including six in Tuscaloosa, let's assess Saban's 2020 Alabama Crimson Tide squad, which might be as close to perfection as the never-satisfied coach has come.

IS 2020 ALABAMA THE GREATEST TEAM OF THE BCS AND CFP ERA?

The 2004 USC squad holds the claim to the greatest team of the BCS era. With coach Pete Carroll, quarterback Matt Leinart and running back Reggie Bush, the Trojans began that season as the preseason No. 1 team in the country. 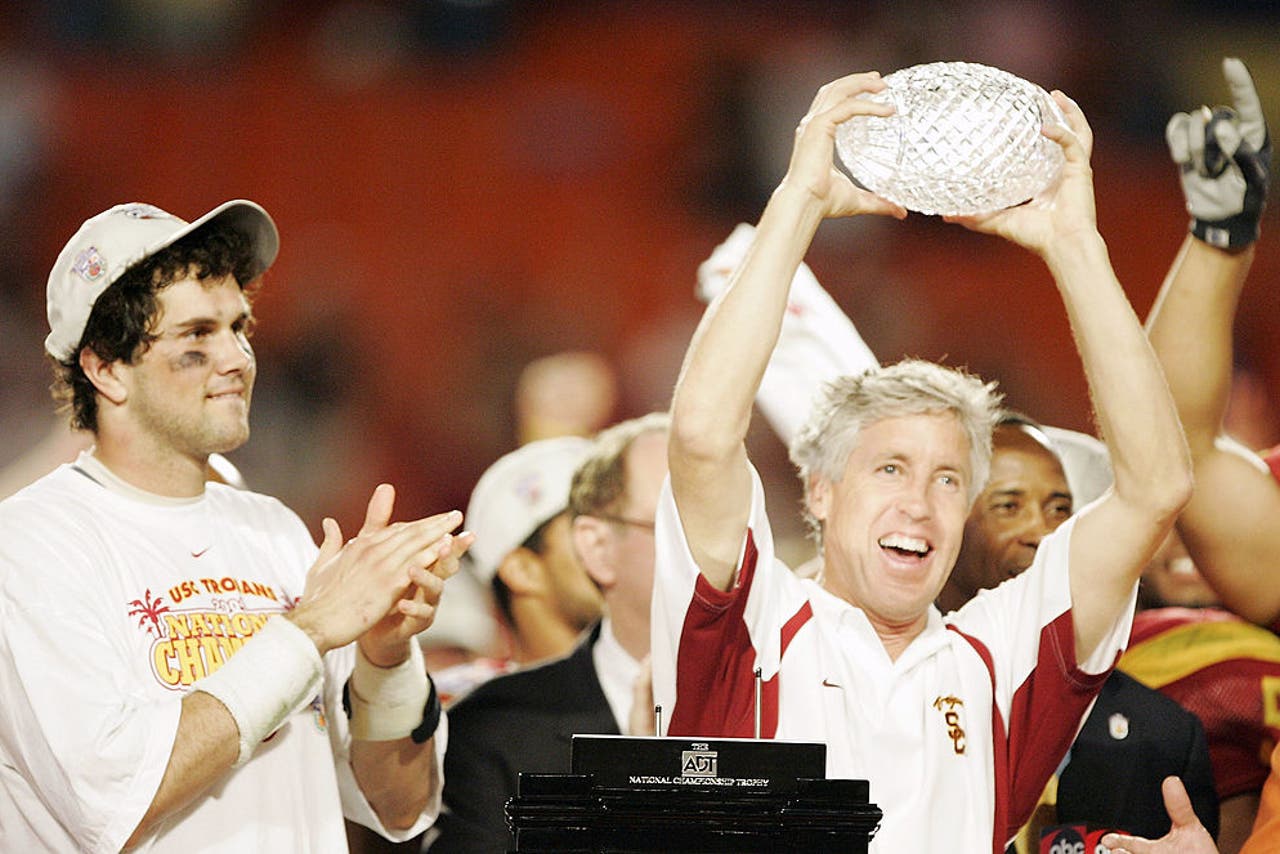 They beat an Oklahoma team that featured Jason White, Adrian Peterson and Hall of Fame coach Bob Stoops, who led a staff that boasted Brent Venables, Bo Pelini, Kevin Sumlin and Kevin Wilson, among others. Before giving up 55 points to USC, Oklahoma hadn’t given up more than 35 all season. Had the Sooners put up 55 on USC and held the Trojans to 19, they’d be the best team of that era. That’s how important those teams are.

Venables was defensive coordinator for one of the best teams of the modern era because 2018 Clemson is still the best team of the CFP era. Not only did the Tigers run the table 15-0 — one of two teams (2019 LSU) in the AP poll era (since 1936) to accomplish that feat — but also the original Death Valley Tigers did so without giving up more than 35 points in a game.

In fact, in Clemson’s last three games of the season — the ACC title game, Cotton Bowl Playoff semifinal and national title game — the Tigers gave up a combined 29 points and handed Saban the worst loss of his career at Alabama with a 44-16 rout in Santa Clara, California, to win the national championship. That Clemson team gave up just 13.1 points per game in an era in which scoring has exploded. 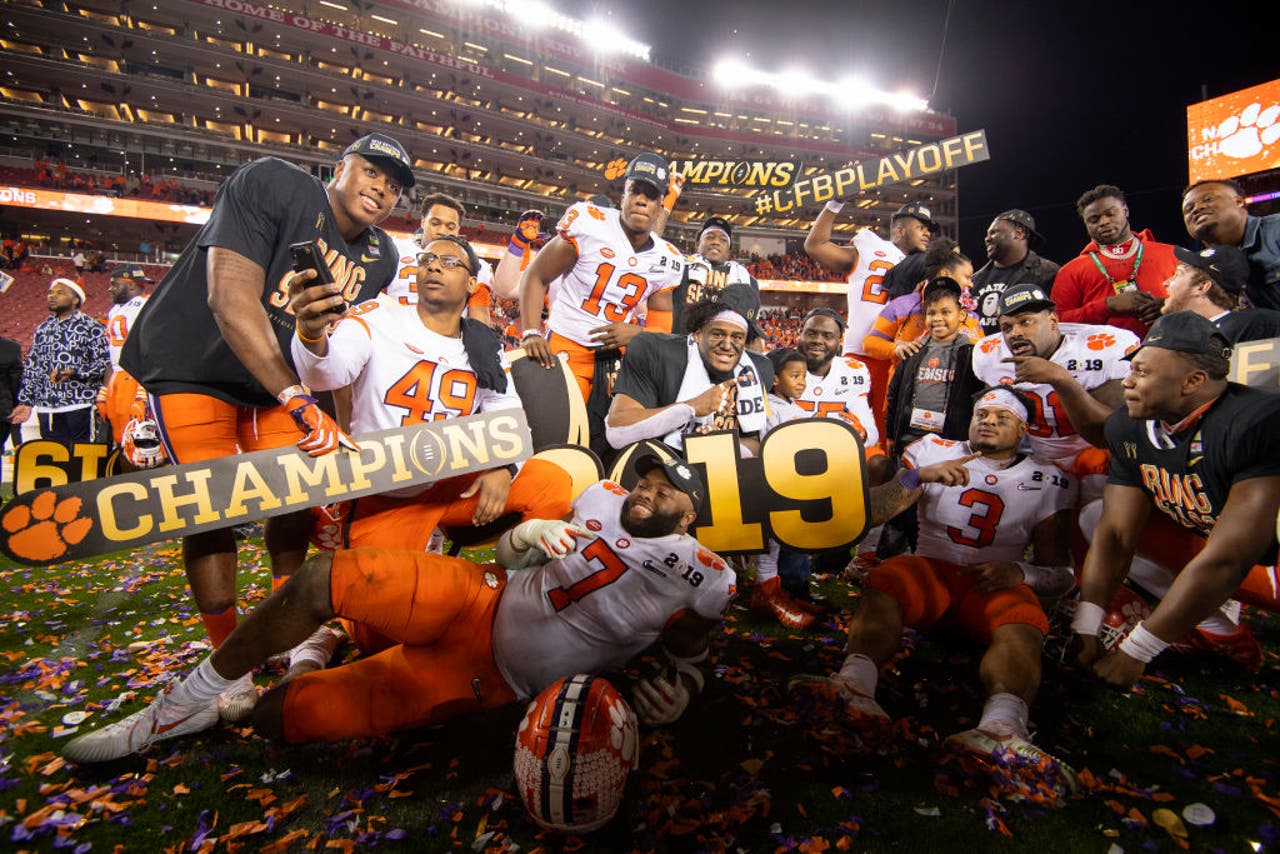 IS ALABAMA'S 2017 CLASS THE GREATEST RECRUITING CLASS OF ALL TIME?

There’s certainly an argument for this. 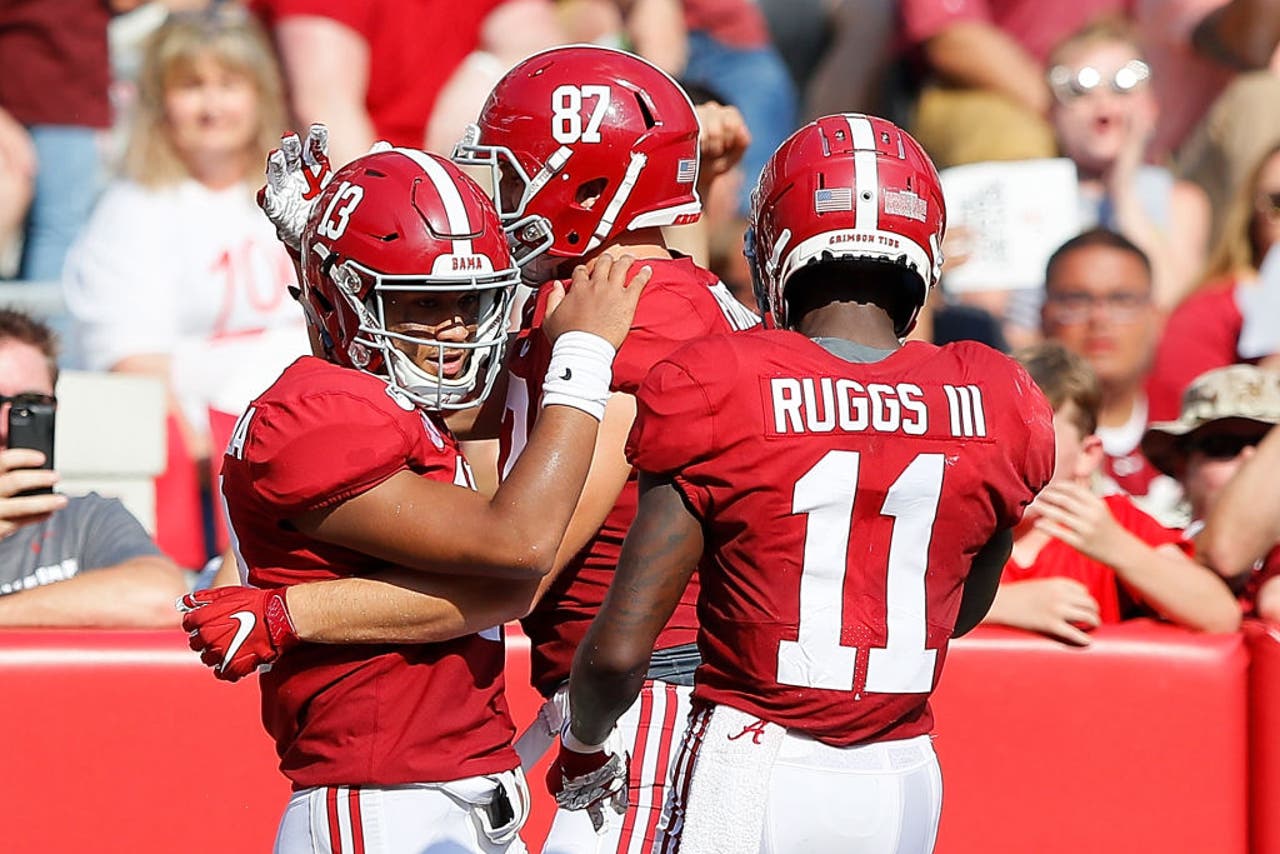 If DeVonta Smith, Jaylen Waddle, Mac Jones or Najee Harris goes in the first round — and at least one of them will — that will make five first-rounders from one class, with the chance for as many as 11, depending how the NFL evaluates defenders Christopher Allen, LaBryan Ray and Dylan Moses.

Is it likely that 11 players from one class go in the first round? No, but the possibility is there, and that’s the point.

It’s the only team to run through an SEC schedule 11-0, and it finished 13-0, wrapping up that perfect season with a 52-24 victory that wasn’t as close as the score indicates over No. 3 and previously undefeated Ohio State.

The 2020 Alabama team became the first team to have a quarterback, running back and wide receiver selected to the Associated Press All-America First Team since the team began featuring two wide receivers and two running backs in 1980, according to FOX Sports research. All three players were in the 2017 class: Jones, Smith and Harris.

The only other class to consider in the modern era is yet another group of Saban’s Saiyans, who probably performed their summer conditioning on Planet Vegeta, the 2008 class.

Those Tide players became the first class to win three national titles in a four-year span since Nebraska performed the feat in 1994, 1995 and 1997. It bears noting: That ’95 Huskers team is one of the five best all time. So is this 2020 Alabama team.

Indeed, the five best teams of all time are 1945 Army, ’95 Nebraska, 2018 Clemson, 2019 LSU and this most recent Alabama team. That’s three teams in the past three years that have been absolute juggernauts for their season of dominance in the sport, and they’ve done it all with scholarship limits.

The 2008 Tide class counted 32 members, and the 2017 class counted 29 enrollees. The NFL’s ultimate college football evaluation begins April 29 with the draft. There is still some sorting to do, but this class is the greatest I’ve ever see, including the 2008 Alabama class.

What’s clear, though, is that Tuscaloosa is home to the greatest recruiting class of the Bowl Championship Series era (2008) and the CFP era (2017), though the argument changes a bit when considering the best single team.

WHO IS THE BEST SKILL-POSITION PLAYER OF THE SABAN ERA?

There are really just three choices here for some, but they’re wrong. 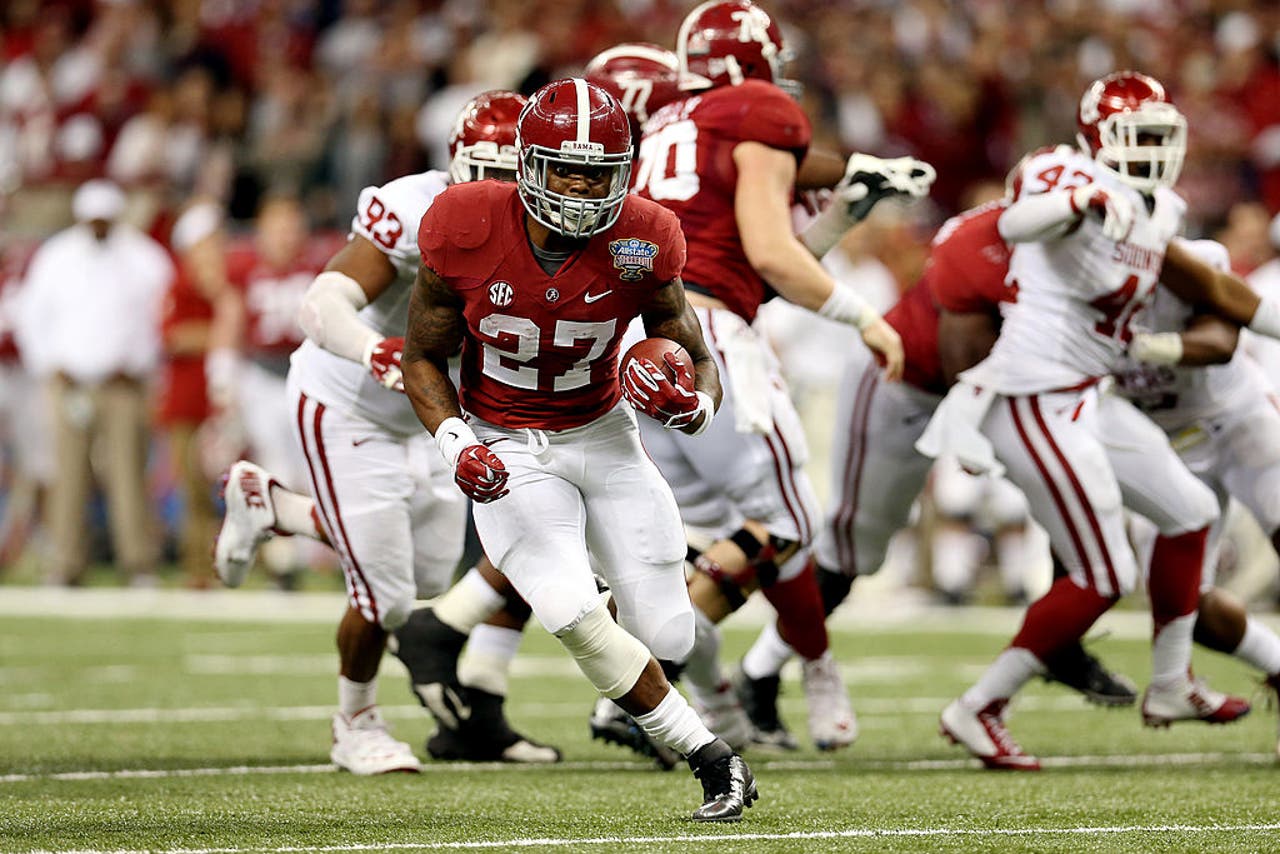 I believe neither Ingram nor Henry (pictured above) was the greatest player in the country the year he won the Heisman because I watched Ndamukong Suh dominate opponents as a defensive tackle at Nebraska in ‘09, and I watched Christian McCaffrey rush for 2,019 yards on 337 carries — two fewer than Peterson had in ’04, when he rushed for 1,925 -- at Stanford in 2015.

While Smith won every major positional award a wide receiver could in 2020, his 117-catch, 1,856-yard season came about in large part because the one player at Alabama better than him, Waddle, broke his ankle in October and didn’t play for 79 days.

The best skill player Saban ever produced is Amari Cooper.

Cooper led Alabama in receiving with 59 catches for 1,000 yards and 11 touchdowns as a true freshman on a national title team. He led the team in receiving yards and catches again in 2013, and he did it one more time as a junior, when he became the offense. 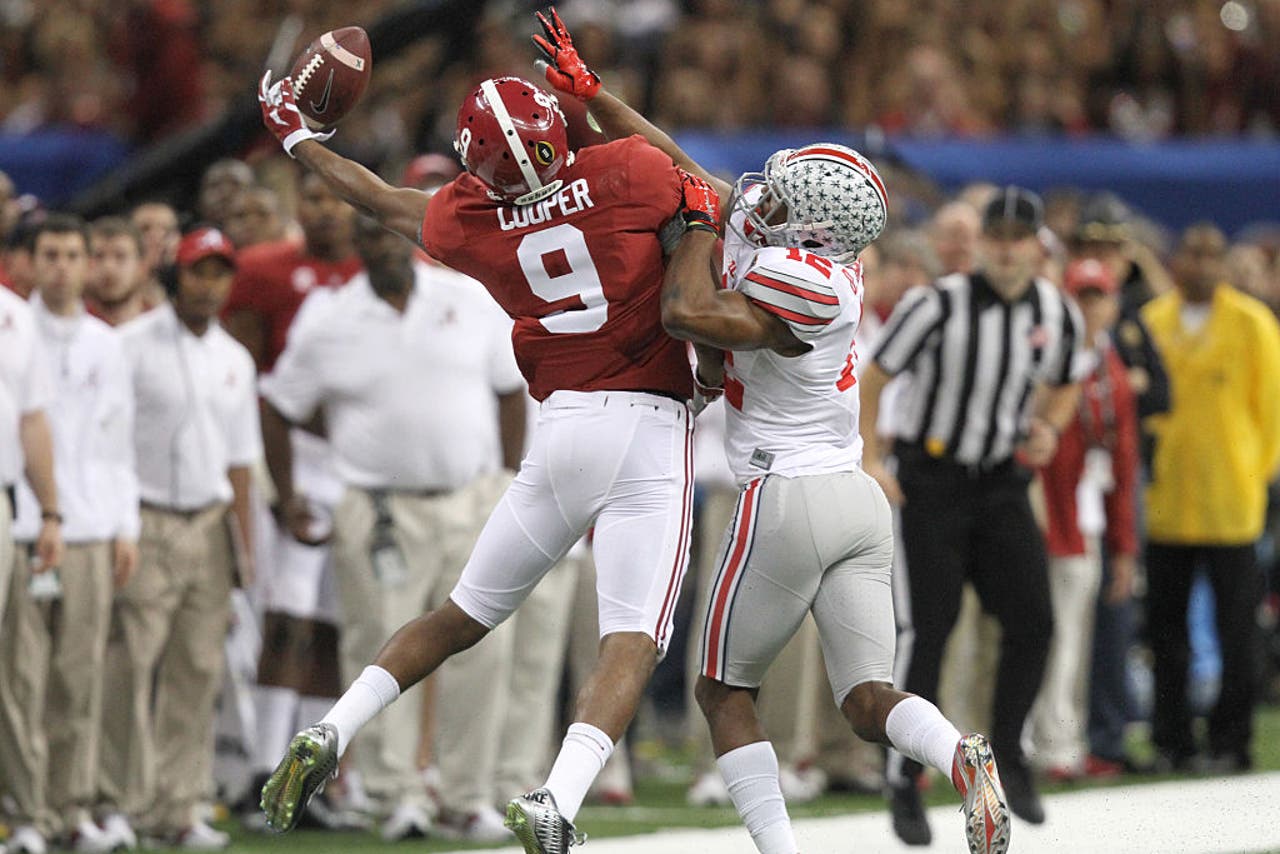 Cooper (pictured above) did all of that with Blake Sims, A.J. McCarron and Jake Coker as his quarterbacks. Among them, only McCarron started a game in the NFL, and he has had only three starts in seven years in the league.

Cooper finished third in the 2014 Heisman voting behind Marcus Mariota and Melvin Gordon.

Trevone Boykin, J.T. Barrett and Jameis Winston rounded out fourth, fifth and sixth place among vote-getters. There’s no question who turned out to be the best pro among those six.

WHO WILL STOP ALABAMA AND WHEN?

Alabama was the laughingstock of college football 20 years ago. Had the CFP been around then, folks would've talked about Miami, Florida State and Oklahoma the way they do today about Clemson, Alabama and Ohio State.

Then Saban showed up in the SEC for a second time and taught the Tide how to ride the wave. Although there have been contenders, most of college football has been trying to keep from drowning in Alabama's wake ever since.

Oklahoma will be back. So will Clemson, Georgia and Ohio State. Those are my bets to win a national title in the next three years. Until then, bear this in mind: Oklahoma has won seven national titles since 1895.

Saban took two years to figure out that he isn't a pro football head coach, and he has still won seven titles in 18 years. The G.O.A.T argument is over.