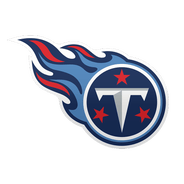 Lewis saw his total touches drop from 214 in his first season with the Titans to 79 in 2019. As a result, his total yards from scrimmage dipped from 917 to 373 as Derrick Henry took over as the driving force of the offense. Though Lewis originally signed a four-year contract with the team that will expire after the 2021 season, the terms of his deal allow him to be cut and cost the Titans just $1.1 million in dead cap space. As a result, it's possible that Lewis will be searching for a new team this offseason, though he will likely remain a depth option wherever he lands.