CFB AM: Ohio State’s QBs are so good they’re scaring recruits away 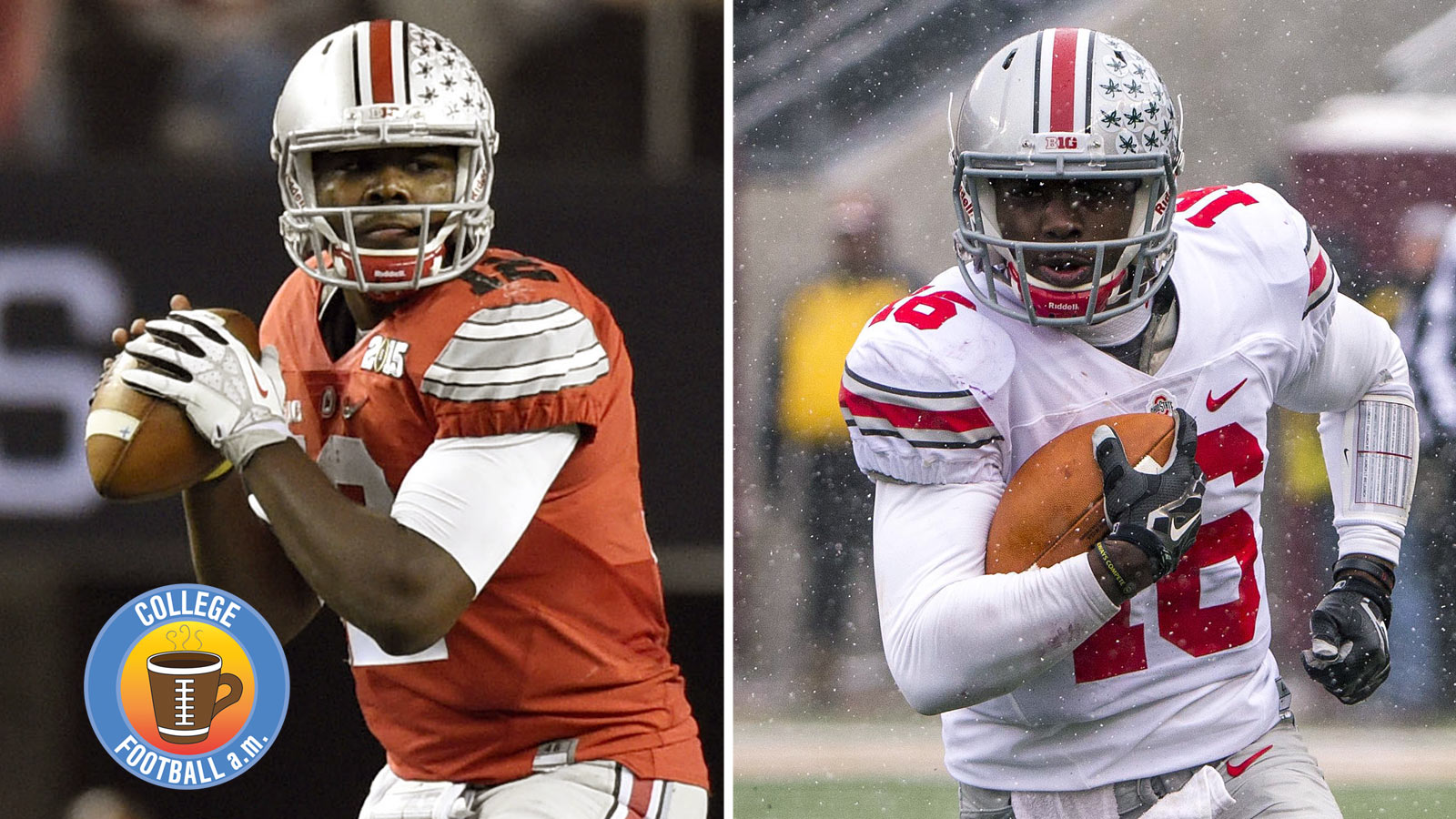 In light of Cardale Jones’ decision last week to come back to Ohio State, here’s what the quarterback position in Columbus currently looks like with no further changes:

* Braxton Miller has one season of eligibility left if he chooses to spend it at Ohio State.

* Jones has two seasons of eligibility left, one of which he has pledged to use in 2015.

That’s six seasons of potential value Urban Meyer has at his disposal in the next three years. How stacked are the Buckeyes at the QB position for the foreseeable future? So stacked that it’s scaring coveted recruits away.

Four-star quarterback/athlete Torrance Gibson is committed to Ohio State, but over the weekend he said things have changed for him. Gibson spent the weekend at Auburn and spoke with coach Gus Malzahn and OC/QB coach Rhett Lashlee about a possible future with the Tigers.

"I sat in Coach Malzahn’s office and he told me that I’m their guy," Gibson told Rivals. "He said he wants me to come in and I would get a fair opportunity to play quarterback, and I believe him."

When asked about his commitment to Ohio State, Gibson acknowledged he’s still committed “but I’m considering Auburn a lot. I don’t have a problem redshirting, but sitting two or three years, that’s not what I want to do.” Next weekend, Gibson is scheduled to visit LSU, another powerhouse program whose QB situation is in flux.

It’s clear that how loaded Ohio State is at QB for the next few years is swaying Gibson’s mind just as much as the natural appeal of those other programs. Last week, I included J.T. Barrett’s 2014 highlights just in case we forgot how good he is in the wake of Cardale Mania, and they’re worth showing again (note: few curse words in music). Barrett is an incredible talent, and he could be running Columbus for a while, which means Meyer might go a couple recruiting classes light on QBs.

1. If you checked out early last Friday and killed your cellphone for the weekend, Joe Paterno’s 111 vacated wins were restored (112 total for Penn State), making him once again No. 1 all time with 409 wins. Former Florida State coach Bobby Bowden regains his spot at No. 2 on the all-time list with 377 victories (he’s had 12 wins vacated), which he’s fine with.

2. Wait, what? How’d that happen? Well, on Friday, the NCAA reached a settlement with Penn State to remove the last of the sanctions handed down in 2012 stemming from the Jerry Sandusky scandal. Faced with a torrent of criticism since issuing the sanctions – with the main points being the NCAA rushed to judgment and recklessly penalized Penn State without due process – the NCAA had already lifted the postseason ban and scholarship reductions. The NCAA forced Penn State to acknowledge “the NCAA’s legitimate and good faith interest and concern regarding the Jerry Sandusky matter” as part of the settlement and also stated the agreement wasn’t the NCAA admitting it screwed up but rather necessary to end litigation regarding how $60 million will be spent to fight child sexual abuse, all of which is ridiculous spin. The NCAA flat-out screwed up and was exposed in how it handled the Penn State case.

Now, hopefully, we can move on and return the focus to where it needs to be – on continuing to educate the country on child sexual abuse and work to prevent anything as horrific as the Sandusky scandal from happening again.

3. So here’s some positive news: The Power 5 conferences held their first meeting to use their newfound autonomy power, and they voted in a cost-of-attendance policy that will add $2,000 to scholarships to help student-athletes a bit more. Even better, the group agreed to four-year scholarships – as opposed to the current model, where schools renew them from year to year – as student-athletes were part of the voting members for the first time ever (15 out of 80 delegates were student-athletes). The group also passed a concussion protocol. All of this will go into effect on Aug. 1.

1. Could Lane Kiffin be gone after only one season at Alabama? According to Adam Schefter, he’s a “frontrunner” for the San Francisco 49ers’ offensive coordinator job. There are some other reports circling that indicate it’s not quite that certain. Whether or not Kiffin gets this particular job, it confirms what most expected: He probably won’t be at Alabama for long. Give a brilliant offensive guy every tool he could hope for, and he’s going to build his way into another job. The only question is if Kiffin wants to be a college head coach again (and, of course, nothing is preventing him from taking an NFL OC job and then going back to college as a head coach).

2. Kyle Whittingham and Utah agreed to terms on a new four-year contract that runs through the 2018 season and will pay Whittingham $2.6 million in 2015 with a $100,000 raise for each subsequent season. This is interesting because only a few weeks ago, there were wild rumors floating around about how bad things had gotten between the coach and Utah AD Chris Hill, to the point that many suspected Whittingham would not be leading the Utes into next season.

Another coaching tidbit: Jay Norvell, who was fired as Oklahoma’s co-offensive coordinator in Bob Stoops’ recent staff shakeup, wasn’t out of work for long. Texas has hired Norvell to be the Longhorns’ wide receivers coach.

3. How bad do Michigan fans want their program to be restored to glory? One waited in a long line to take a picture with Ohio State’s trophy. Speaking of Michigan, Jim Harbaugh hired former star Tyrone Wheatley as his running backs coach.

1. Bruce Feldman wrote a piece on Sunday about how Brian Kelly locked in Notre Dame’s two biggest recruits of 2015 during the recruiting dead period (no, he didn’t break any rules). Check it out.

2. The Shrine Classic took place over the weekend, a game where prospects perform in front of a bunch of NFL evaluators, and here’s the play you want to see: Colorado punter Darragh O’Neill saved a safety by making a sweet one-handed grab on a bad snap and then getting the punt off. Who says punters aren’t world-class athletes?

3. Clemson is getting some fresh new cleats for the 2015 season.

* Part of the in-stadium experience for fans now is providing a quality mobile experience, as everyone wants to tweet and post pictures to Instagram and Facebook and use other social media to let their friends know they’re at the game. Consider this trend: AT&T said data traffic at the national championship was up by 125 percent compared to last year’s Super Bowl.

* Today is the designated day where we celebrate Martin Luther King Jr., but really, we should be reminded of his lessons in courage and leadership and selflessness year-round. I loved what the NBA did with this one-minute tribute video.